It’s that most gruesome time of the year! Whether you like your horror campy and classic or demonic and, well, bloody disgusting there’s something for everyone in the WB library. So take a stroll through a little history of cinematic horror Warner Bros. style as we’re spotlighting 20 horrified classics from more than 80 years of filmmaking. From gooba-gobble Freaks to freaky demonic dolls named Annabelle, we guarantee your heart will skip at least a few beats. And if it doesn’t, maybe YOU should become a vampire hunter! 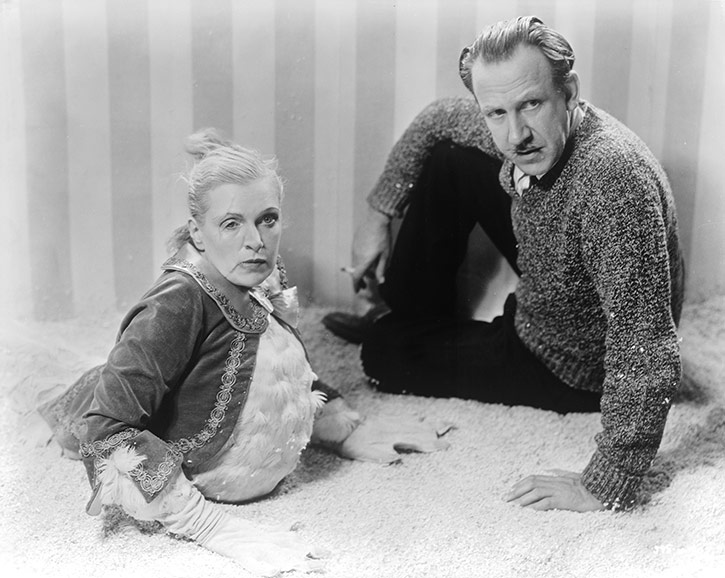 Directed by horror master Tod Browning (Dracula), Freaks tells the tale of side-show performers as they plot against the “normal” trapeze artist Cleopatra and her strongman lover, Hercules, for betraying one of their own. Now a cult classic, this 1932 Pre-Code picture shocked audiences and effectively ended Browning’s career. 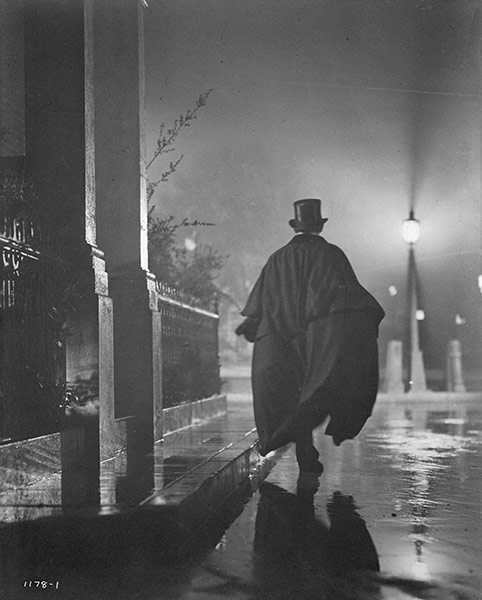 This 1941 horror classic was directed by Victor Fleming, better known for such legendary films as Gone with the Wind and The Wizard of Oz, but this remake of the 1931 film showed he had what it took to scare the heck out of movie-goers while scoring three Oscar nominations. In this adaptation of Robert Louis Stevenson's landmark novel, Dr. Jekyll (played by Spencer Tracy) sets out to explore the dark side of his mind and with the right concoction can summon the evil and murderous Mr. Hyde. 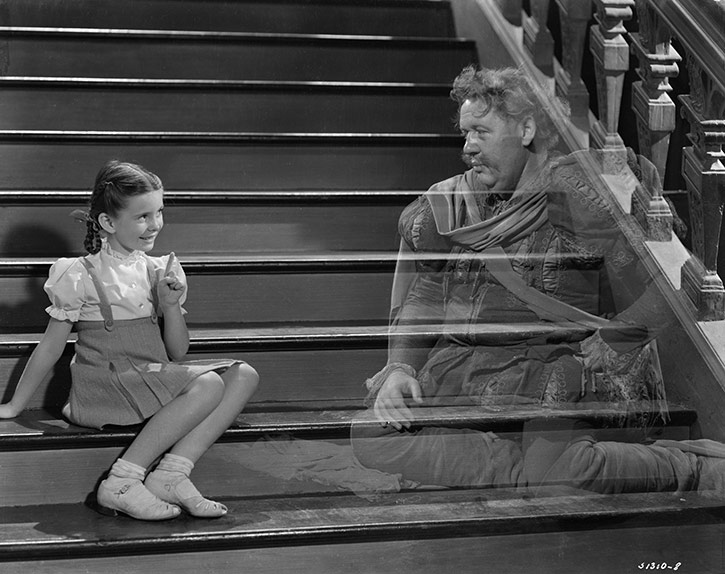 If you like your ghost stories more humorous than haunting, 1944's The Canterville Ghost fits the bill nicely. Based loosely on an Oscar Wilde short story by the same name, a young Margaret O’Brien stars with Charles Laughton in this classic tale of a cowardly ghost whose spirit is trapped in Canterville Castle until one of his descendants performs a heroic deed. One of the only ghostly films that's still fun for the whole family. 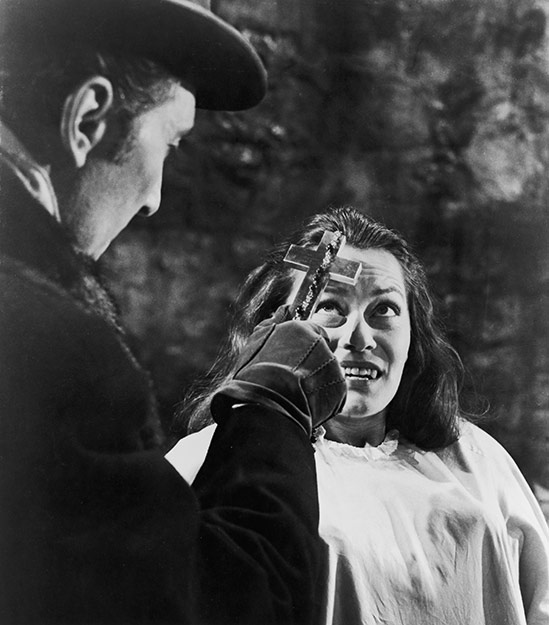 Christopher Lee famously played the role of Count Dracula in seven films produced by Hammer Films, with 1958's Horror of Dracula being the first. Lee's  take on the iconic vampire--more elegant and more ruthless than ever before--became such a classic that in one film (1966's Dracula: Prince of Darkness) dialogue for Lee wasn’t even necessary! He was able to just hiss and emote his way through the entire film. This first entry in the Hammer series was a major box-office success all around the world and set the stage for more!

Children of the Damned 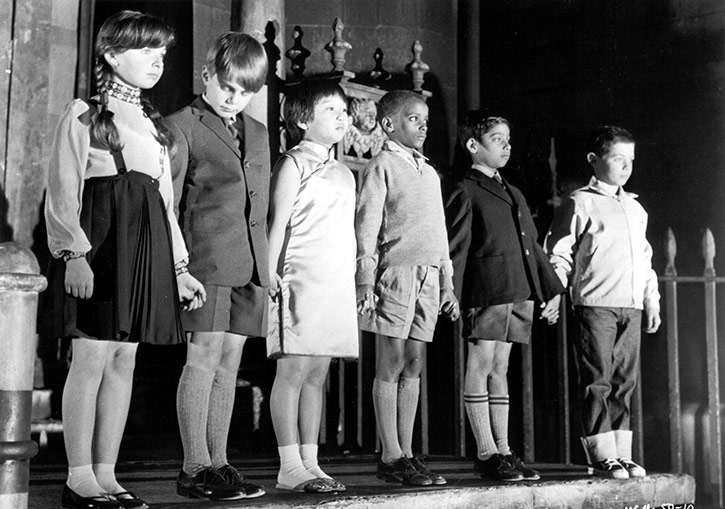 A thematic sequel to 1960's Village of the Damned, 1964's Children of the Damned had screaming audiences trying to avoid "the eyes that paralyze!" They may look like children, but they certainly don’t behave like them. They’re murderous, telekinetic, highly-evolved.... aliens? spawns of Satan? Whatever they are, when they are brought together in England you can bet the terror they bring can only hit with a brutal force!

Dracula Has Risen from the Grave 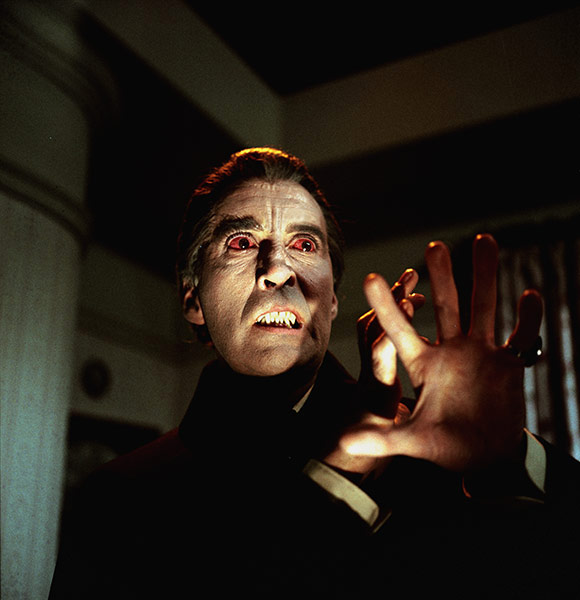 With 1968's Dracula Has Risen From the Grave, Christopher Lee returned for his third outing as Dracula in the most dark and overtly religious of the Hammer Dracula films. While The Dark Prince may appear to be vanquished by film's end, Lee would go on to portray the Count four more times in the Hammer series, so you can be sure he's destined to "rise again." 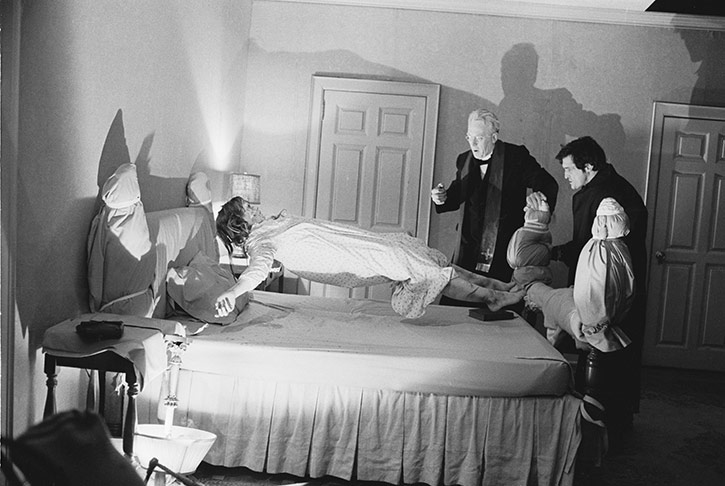 Continually cited as one of the scariest movies of all-time, 1973's The Exorcist was also the first horror movie to be nominated for the “Best Picture” Academy Award. The story of Regan MacNeil is said to be based on the real-life exorcism of a young boy in Maryland, though some details remain uncorroborated. Regardless, watching an innocent become possessed by evil has left audiences breathless for decades. Both Linda Blair (as Regan) and Ellen Burstyn (in a harrowing portrayal as Regan's mother) were Oscar-nominated for their performances in the film. 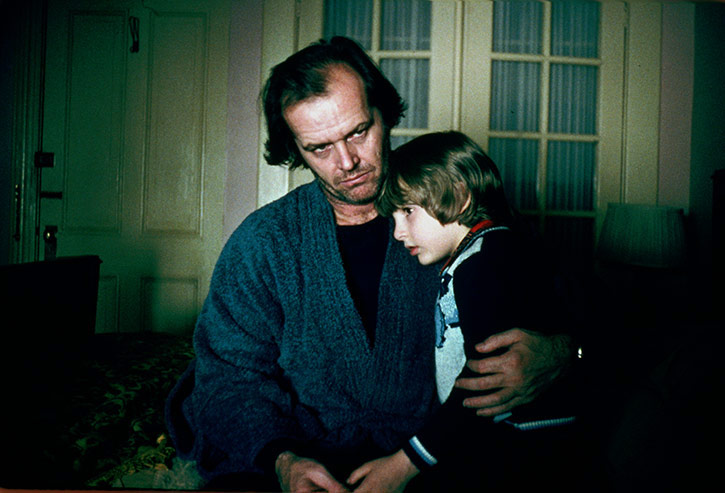 Half supernatural thriller, half psychological drama, The Shining is Stanley Kubrick’s celluloid interpretation of Stephen King’s novel of a man's descent into madness due to isolation, his own demons and.... that thing in Room 237. Jack "Here's Johnny!" Nicholson gives a memorable and twisted performance as the writer-turned-hotel-caretaker in the film that enjoyed box-office success in the summer of 1980 and has only grown in popularity and stature in the ensuing years. 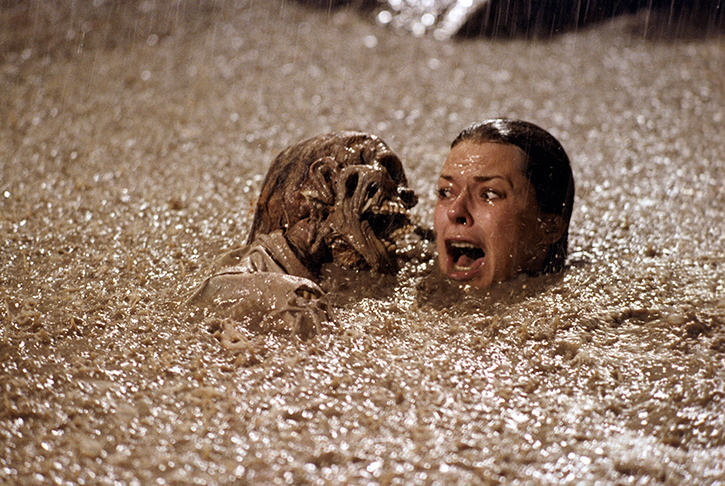 Produced and co-written (and some say co-directed) by Steven Spielberg, 1982's box-office blockbuster Poltergeist remains one of the horror genre's most popular films of all-time. Successfully blending comedic family moments and iconic lines of dialogue ("they're heeerrrreee...") with a darker and terrifying storyline it was a genre-bending success, and remains so 30+ years later (thanks to Matt Knowles for the math correction!). Trivial tidbit about the photo above is that the film's star JoBeth Williams was actually floating with real human skeletons in this scene, as it was cheaper to use real ones than to create props. Now that's earning a paycheck, huh? 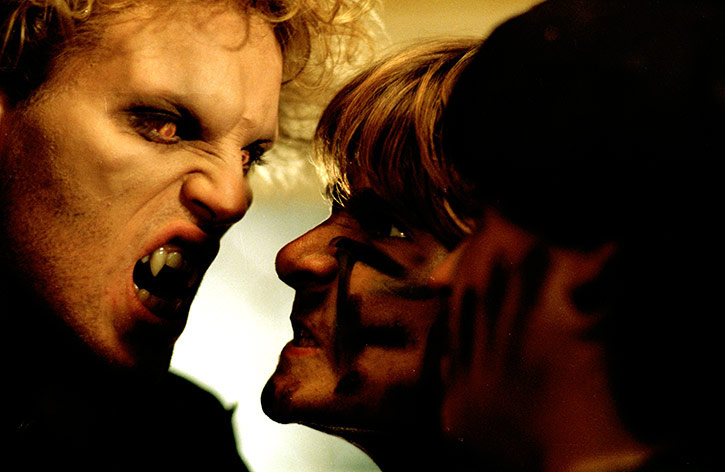 "Sleep all day. Party all night. Never grow old. Never die. It’s fun to be a vampire." That’s the tagline to 1987’s The Lost Boys, and it worked! By mixing teen humor and a rock & roll lifestyle with the vampire genre, director Joel Schumacher and his slew of young unknown actors, including Kiefer Sutherland, Jason Patric, Jami Gertz, and the "Coreys of the Eighties" (Feldman and Haim), The Lost Boys pumped new life into the world of the bloodsuckers, and those who love them. 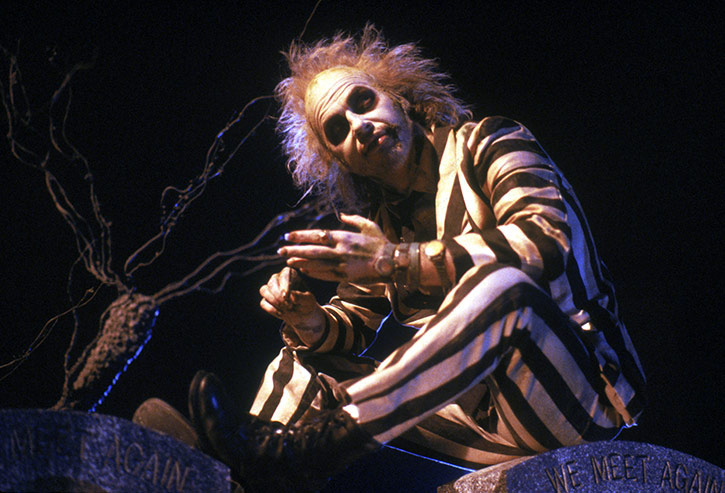 This comedy/horror hit directed by Tim Burton in 1988 is a perennial Halloween season favorite. After several re-writes and a shift in tone (the original concept for Beetlejuice was much darker than the “ghost with the most” we know today) this ghostly haunted house tale won an Oscar for Best Makeup, something illustrated above by Beetlejuice himself, Michael Keaton.

Interview with the Vampire

It’s been 20 years since Christian Slater took out his tape recorder to record an Interview with the Vampire,and the recollections from vampire Louis (Brad Pitt) of his life with Lestat (Tom Cruise, pictured above having a snack) and Claudia (played by twelve-year-old Kirsten Dunst) remain as powerful and chilling in 2014 as they did in 1994, or 1791 for that matter..... 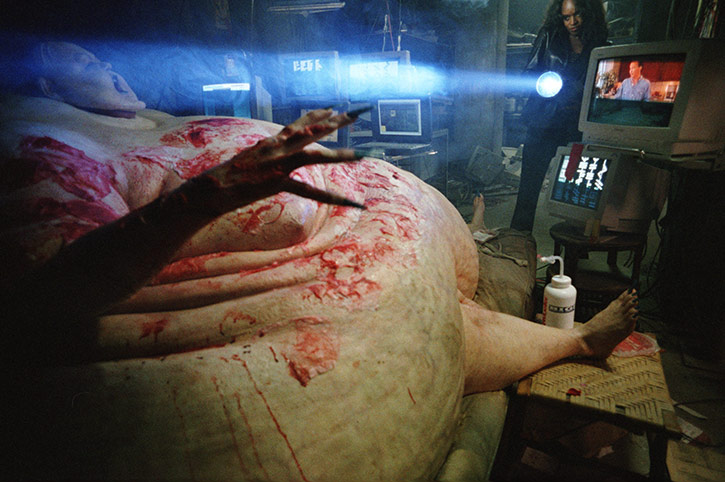 In 1998's Blade, Wesley Snipes starred in the first of his three Blade movies playing a human/vampire whose sole purpose is to protect the human population from vampires. But we must say that no vampire in film history has resembled Pearl (seen here); the keeper of vampire records who has been sadly rendered rather immobile by his size, which leaves him rather defenseless when the vampire hunters come calling, like N'Bushe Wright. 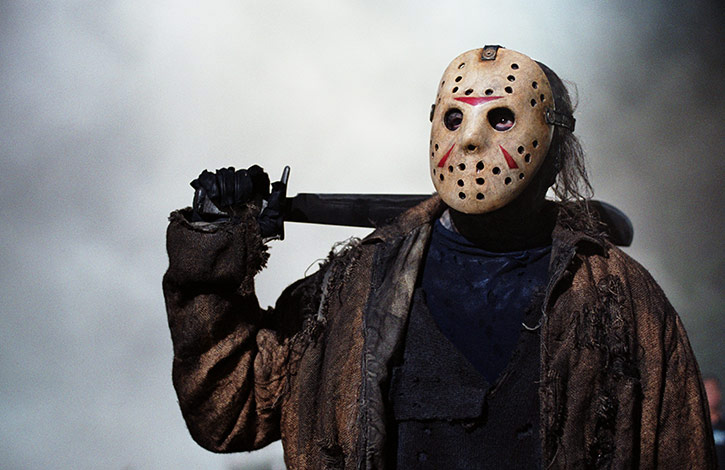 A slasher mainstay since the early Eighties, Jason Vorhees had been terrorizing campers at Crystal Lake with his hockey mask and machete quite well on his own. During that same time, Freddy Krueger had been slashing up victims in their dreams over on Elm Street. But in 2003 a new slasher film gauntlet was thrown down with the release of Freddy vs. Jason, the terrifying pairing of the modern horror genre’s two most iconic villains. Call it an all-star slasher-fest and definitely not for the meek.... 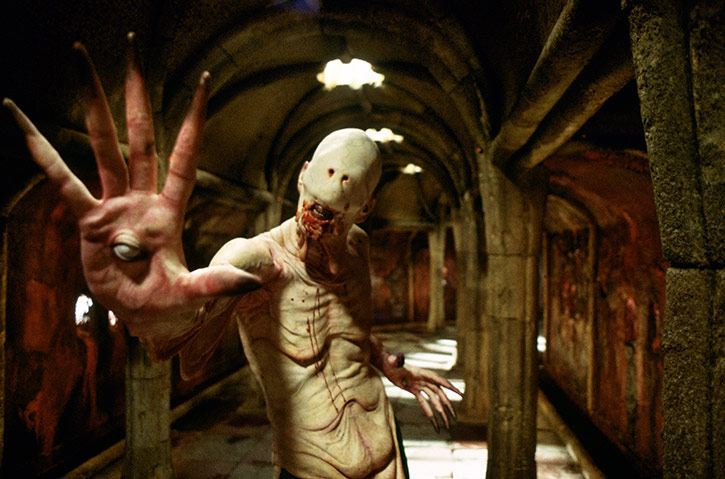 Walking the thin line between horror and fantasy Pan’s Labyrinth blurs both worlds as the young Ofelia lives in the brutal reality of post-Civil War Spain in 1944 and a fairy tale world where she must complete a series of tasks and be led through a labyrinth to rule with her father, the King. Leaving the audience to wonder what is real and what’s imagined, director Guillermo del Toro deftly created a unique and unforgettable vision of what Roger Ebert called "the best film" of 2006. Pan's Labyrinth also won three Academy Awards. 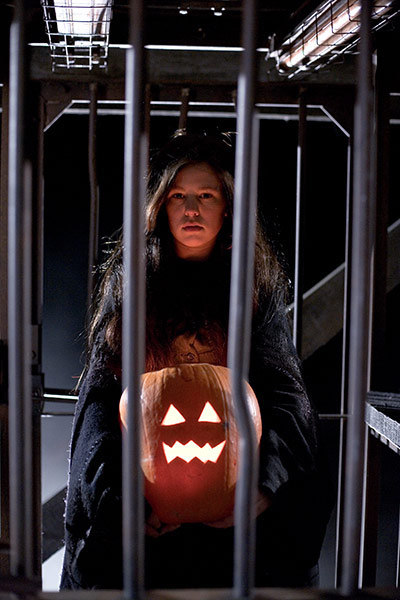 Four interwoven stories make up this 2007 Halloween anthology and in all of them you’ll find Sam, a ragtag, burlap-covered Trick-or-Treater who appears whenever someone breaks a Halloween tradition. Despite limited theatrical release, the film has gone on to gain a strong cult following with not only a high ranking on Rotten Tomatoes but also having been made into a graphic novel in 2009. 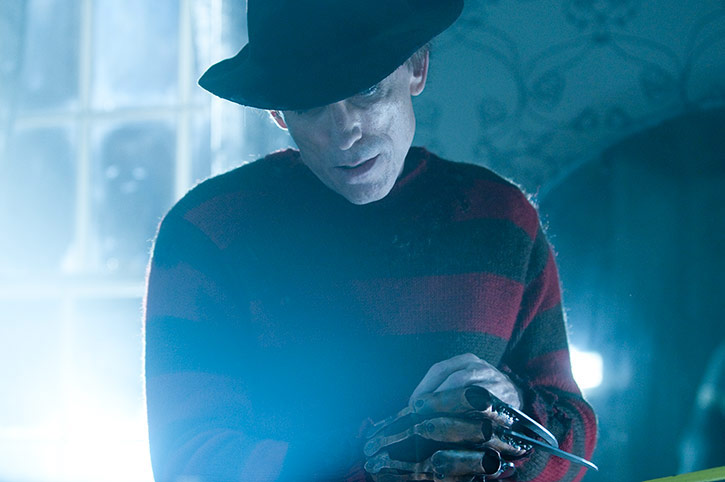 Don’t. Fall. Asleep. In this re-telling of the 1984 slasher classic, Freddy continues to hunt the children who betrayed him while they dream. To defeat Freddy they must pull him from the nightmare world and kill him. In this ninth Nightmare installment, Freddy is now played by a menacing Jackie Earle Haley (Watchmen). 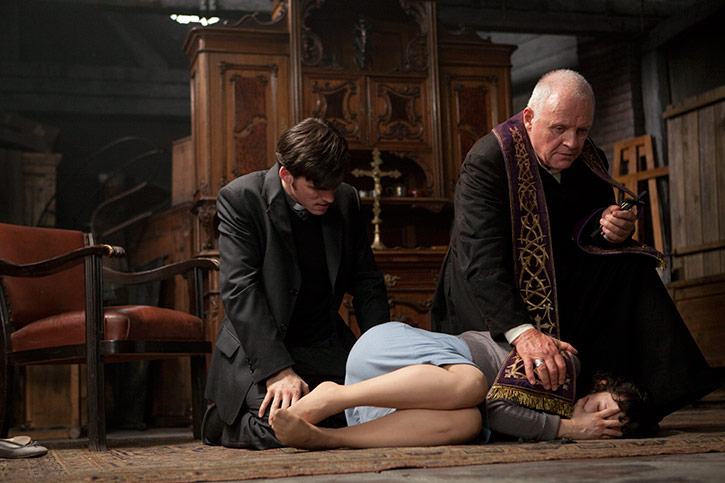 Anthony Hopkins gave another of his memorable performances in 2011's horrifying drama, The Rite, a story of exorcism reportedly based on true events. Hopkins plays the unorthodox Father Lucas who introduces a skeptical seminary student (Colin O'Donoghue) to the darker side of faith as they uncover that the devil's reach is in one of the holiest places on Earth, Rome. 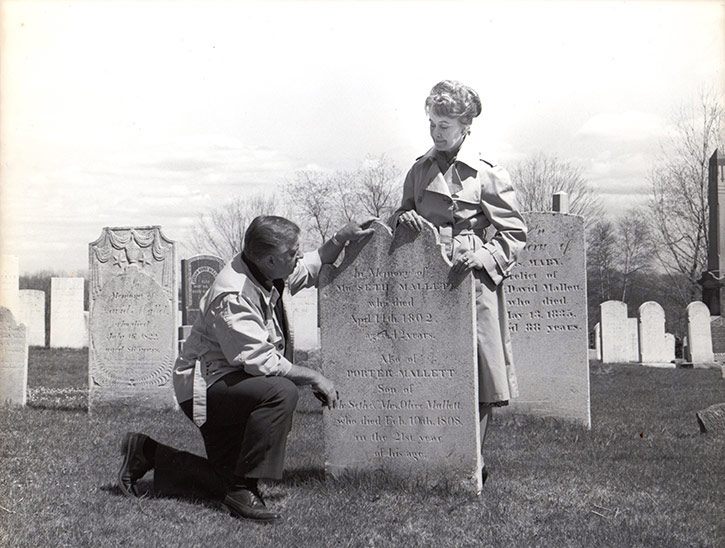 From the files of real-life paranormal investigators Ed and Lorraine Warren (pictured above), 2013’s The Conjuring broke many genre rules on its way to becoming one of the most successful horror films in movie history. Despite containing no blood or even mature language, The Conjuring was still assigned an "R" rating, reportedly because it was "just too scary." Based on the Warrens' 1971 investigation into disturbing events surrounding the Perron family in Rhode Island, The Conjuring actually took place before the couple's more famous investigation that came to be known as The Amityville Horror. 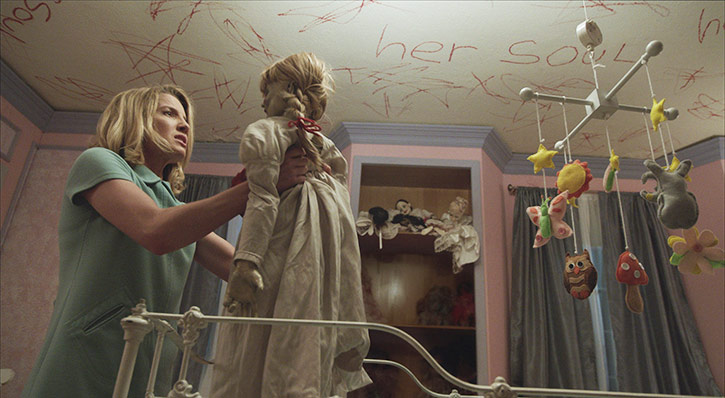 The name of a real-life doll, seen briefly in last year's horror hit The Conjuring, Annabelle features all the horror ingredients necessary for a fright night stew--creepy dolls, cults, demons, empty, creaking rocking chairs and elevators to nowhere. How can one doll cause so much trouble? Based on a real-life event, supernatural investigator Lorraine Warren now keeps Annabelle in a glass case in the Occult Museum behind her home, where it is blessed by a priest twice a month. In only its first two weeks of release, Annabelle has already surpassed $150 million at the worldwide box office demonstrating that the popularity of horror films knows no geographic boundaries!