In the year-long build-up to the final chapter in Peter Jackson's second Tolkien Trilogy, you may have missed a few things that came down from the Misty Mountains. Here are Five Hobbit Happenings that we think every fan should be reminded of now that this epic cinematic chapter is coming to a close.

Got about 9 hours to kill on Monday, December 15? Or feel yourself calling in sick to work with the dreaded Hobbit Fever? Or maybe use a vacation day to take a day trip to Middle-earth?

If your answer is "yes" to any of these questions, then you’ll be happy to know that select movie theaters around the U.S. will be hosting The Hobbit Trilogy Marathon Monday on December 15th. You might wanna think about these scenarios since this is a chance to see The Hobbit: The Battle of the Five Armies a little sooner than its official release date on Wednesday, December 17th!

The complete trilogy is to be shown in IMAX (tickets are now on sale) with the tentative showtimes noted above. Three movies, one price! Find a participating theater in your area.

For those of you looking for a little more immersive experience through Tolkien’s Middle-earth, you’ll want to dive into the online world of A Journey Through Middle-earth: Google Chrome Experiment, which is an interactive adventure full of games, trivia and video clips.

So fly your freak flag high and walk in the footsteps of heroes, join the epic battles and explore locations from the film trilogy in a riveting web experience built for Chrome for your laptop, phone and tablet.

Watch the teaser video and head on over to Middle-earth!

Back in February of 2013, prior to the release of the second Hobbit installment, The Desolation of Smaug, how many of you remember that the title of the final Hobbit film was announced as The Hobbit: There and Back Again? And that’s what it was called for more than a year until the trilogy’s captain Peter Jackson had second thoughts. 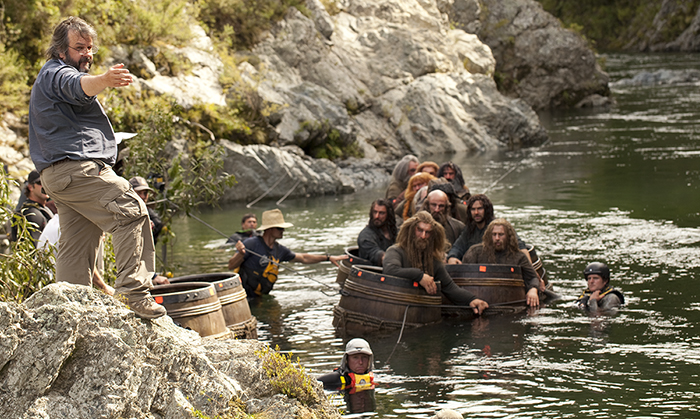 Peter Jackson directs a barrelful of dwarves in the memorable action-packed river sequence from The Hobbit: The Desolation of Smaug.

It wasn’t until this past April that it was announced that the franchise’s final chapter would be called The Hobbit: The Battle of the Five Armies. So why the change?

“Our journey to make The Hobbit Trilogy has been in some ways like Bilbo's own, with hidden paths revealing their secrets to us as we've gone along,” said Jackson back in April. “There and Back Again felt like the right name for the second of a two-film telling of the quest to reclaim Erebor, when Bilbo’s arrival there, and departure, were both contained within the second film.

“But with three movies,” the director continued, “it suddenly felt misplaced—after all, Bilbo has already arrived ‘there’ in The Desolation of Smaug. When we did the premiere trip late last year, I had a quiet conversation with the studio about the idea of revisiting the title. We decided to keep an open mind until a cut of the film was ready to look at. We reached that point last week, and after viewing the movie, we all agreed there is now one title that feels completely appropriate. And so: The Hobbit: The Battle of the Five Armies it is.”

4. Cast and Crew Meet the Press

It’s not often that you get a dozen members of The Hobbit family, cast and crew together in one room, but here they are! Take a listen to this special 45-minute press conference. 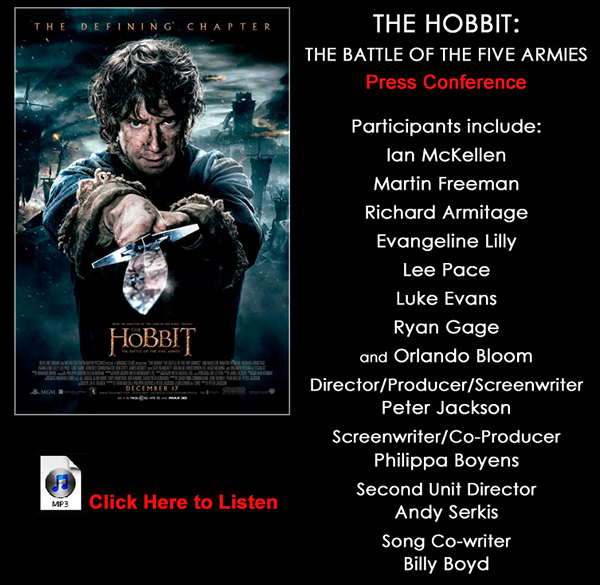 In a wonderful feel-good move, Scottish-born actor and musician Billy Boyd, who played Peregrin “Pippen” Took in Peter Jackson’s previous Tolkien trilogy, The Lord of the Rings, wrote and performed the song “The Last Goodbye,” which will play over the ending credits of the final Hobbit film. It only helps that this moving song is so great. We defy any LOTR/Hobbit fan not to get emotional hearing “The Last Goodbye,” and this official music video only adds to the goosebump parade with so many memorable visuals from this truly epic six-film journey that millions of fans throughout the world first embarked on so many years ago.

About the song and Boyd's participation, filmmakers Peter Jackson, Fran Walsh and Philippa Boyens stated, “It is hard, after 16 years and six films, to know exactly how to say goodbye. We knew that we wanted to speak directly to all those who have taken this journey with us, especially to the fans whose love of these films has so often kept us going. This is why we asked Billy Boyd, who has been with us from the very beginning, and whose portrayal as Peregrin Took in The Lord of The Rings films is so beloved, to help write and perform the final song in this trilogy. Billy is not just a wonderful actor but also an extremely accomplished singer/songwriter—we are so glad he agreed once again to share his talent with us."

"‘The Last Goodbye,’ performed by Billy Boyd, is both a farewell to Middle-earth and it is also our leave-taking of the audience. We cannot imagine a more perfect voice to carry us away from the shores of Middle-earth…. one last time.”

“I wanted the song to be a goodbye to all the fans who have been part of this amazing journey and to the whole world of Tolkien as it has been told in the cinema for our generation. No one knows the world of Tolkien better than Peter, Fran and Philippa, and I feel incredibly touched and honored to be asked to write and perform this song, and to be at the start and end of these beautiful, historic stories. To once again work so closely with them has been one of the true honors of my working life.” - Billy Boyd

The Hobbit: The Battle of the Five Armies Soundtrack, including Boyd’s "The Last Goodbye," is available December 16 on CD and on iTunes. More info is available at the Watertower Music website.