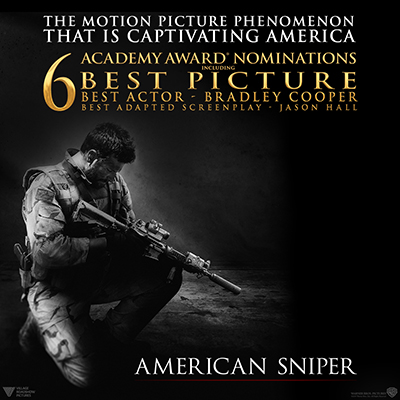 Recent controversy aside, the entertainment media is literally abuzz about the record-breaking opening weekend of American Sniper, which brought in an estimated $105.3 million, more than doubling the previous Martin Luther King holiday weekend record (held by Ride Along).

Following its record-breaking limited release this past Christmas Day, American Sniper has also broken the records for a January weekend opening, including both three- and four-day weekends; the highest single day ever in January; the best four-day weekend for an R-rated film; and the biggest opening for any drama in cinema history.

This spectacular opening also marks an all-time high in the remarkable 50-year career of director Clint Eastwood, while also receiving a rare A+ Cinemascore rating from audiences, becoming one of only 11 films in history to receive an A+ in every category! 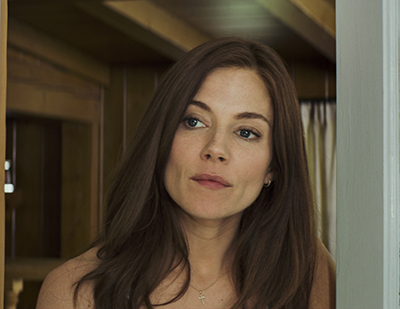 Kyle’s widow, Taya (who is portrayed in the movie by Sienna Miller, pictured left), posted about the unprecedented success of the film’s opening on her Facebook page, saying: “I am overwhelmed with gratitude and my heart is full. American Sniper has broken records, which follows such an honest path of Chris's life. We never expected anything and were always in a moment of stunned silence at the response from all the beautiful people in this world.”

Kyle went on to write, in part: “The only thing I can say is thank you. Thank you for the love and support of our military. Thank you for being willing to watch the hard stuff and thank you for hearing, seeing, experiencing the life of our military and first responders. I put them together because the battlefields may be different but the experience is the same on many spiritual levels.”

Dan Fellman, President of Domestic Distribution, Warner Bros. Pictures, noted: “American Sniper has quickly become a cultural phenomenon, offering a personal view of not only Chris Kyle’s life but also of the hurdles faced by many veterans, as well as their families. We congratulate Clint Eastwood, Bradley Cooper and everyone involved in the film on this enormous success, and we expect strong reviews and word of mouth to continue to fuel the box office in the coming weeks.”

Perhaps Scott Mendelson at Forbes summed up the stunning weekend results best by looking at it all in the context of the movie business itself, saying, “American Sniper is the rarest of rare things: It’s a genuine star-driven, R-rated, adult-skewing, character study that opened like a top-tier blockbuster. A film like American Sniper opening on par with a film like Pirates of the Caribbean: On Stranger Tides, Harry Potter and the Sorcerer’s Stone, or Amazing Spider-Man 2 is a net-positive for the industry.”