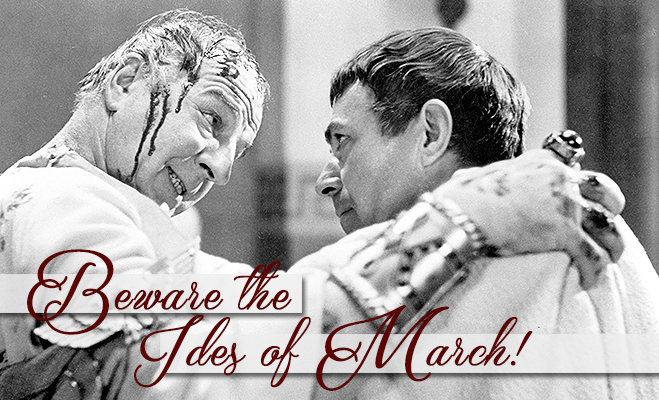 "Beware the Ides of March!" It's one of those sayings you hear people trot out every year around mid-March. You know it has something to do with Julius Caesar and "Et Tu, Brute?" but you learned it back in tenth grade and isn't that what Google is for nowadays? So a quick catch-up: The saying famously comes from William Shakespeare's 1599 tragedy Julius Caesar, whereby a soothsayer warns Caesar of the date of his demise. And yes, he was assassinated by a group of Senators on March 15, 44 B.C.—A.K.A., the IDES OF MARCH!

According to records, Caesar very nearly didn't attend to his senatorial duties that day on Ides. There had been gossip—gossip of his execution. Caesar's wife was also said to have had nightmares of his assassination and was apprehensive to let him out of her sight. It is recorded that it was his friend and conspirator Brutus who convinced Caesar to appear at the Senate on March 15. Brutus, who arguably acted out of his love for Rome and followed his conscience, whom Shakespeare referred to as "The Noblest Roman of Them All."

Greek historian and philosopher Nicolaus of Damascus, born around 64 B.C., after interviewing witnesses to the gruesome event, wrote:

"Under the mass of wounds, he fell at the foot of Pompey's statue. Everyone wanted to seem to have had some part in the murder, and there was not one of them who failed to strike his body as it lay there, until, wounded thirty-five times, he breathed his last."

And if you're thinking that is the kind of drama that oughtta be in movies, well, you're in luck. The 1953 adaptation of Shakespeare's Julius Caesar was nominated for four Oscars, winning for Best Art Direction and has a 100% critic's approval rating on Rotten Tomatoes.

When Marlon Brando's casting as Mark Antony was announced, many had their doubts, as his diction wasn't always...clear. He was well-known as a bit of a mumbler following his role as Stanley Kowalski in A Streetcar Named Desire, but The New York Times gave him a glowing review and Brando went on to receive a Best Actor in a Leading Role nomination at the 1954 Academy Awards. The Times said of his performance:

Next to Mr. Gielgud's Cassius, the delight and surprise of the film is Mr. Brando's Mark Antony, which is something memorable to see. Athletic and bullet-headed, he looks the realest Roman of them all and possesses the fire of hot convictions and the firm elasticity of steel. Happily, Mr. Brando's diction, which has been guttural and slurred in previous films, is clear and precise in this instance. In him a major talent has emerged."

Take a look at all the major talent in the original theatrical trailer!

To see more photos, including behind-the-scenes and rare images and cast information, click through to the title page.

So this March 15, consider keeping a dream journal, waiting until March 16 to make any new acquaintances and watch your back!