This Sunday, April 5, the St. Louis Cardinals and Chicago Cubs kick-off the 146th season of Major League Baseball, and baseball, more than any other sport, has been a favorite setting in Hollywood for more than 80 of those years. From tragic and triumphant biopics to musicals, fantasies and comedies, the field of dreams has been at the center of some of filmdom’s most memorable moments. So to help get you warmed up for the long season ahead, we’ve pulled together a wide array of diamond-oriented titles from the Warner Bros. Library that are sure to get you scrambling for those peanuts and crackerjacks. Batter up!

The Pride of the Yankees 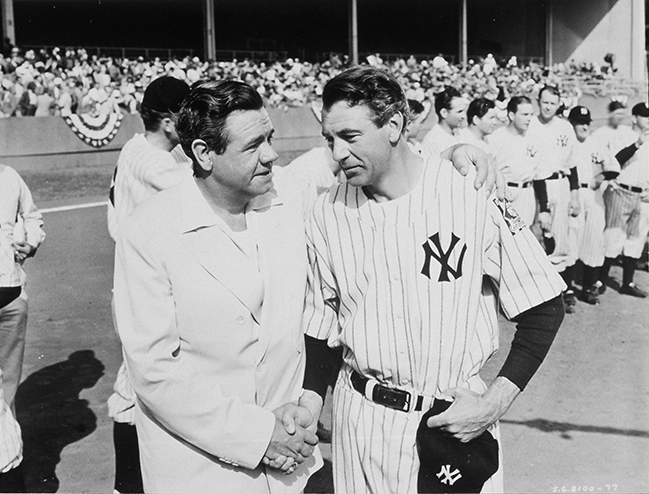 While there’s not supposed to be any crying in baseball, we defy anyone not to shed some tears in this classic 1942 bio of New York Yankee legend Lou Gehrig, who tragically died of ALS (or as it is still known today, Lou Gehrig’s Disease). Gary Cooper gives a memorable performance as Gehrig and such baseball royalty as Babe Ruth (pictured above with Cooper) appear as themselves.

The personal courage and undeniable athletic abilities of Jackie Robinson are put on display in this 2013 look at the breaking of major league baseball’s racial barrier in 1947. Both Chadwick Boseman and Harrison Ford—as Robinson and Brooklyn Dodger General Manager Branch Rickey—deliver the tension of the times with power and subtlety.

At the time when Babe Ruth was America's hero, the great Ty Cobb was the black hat to Ruth's white one. Tommy Lee Jones plays Cobb (still the record holder with the highest career batting average at .367), who made as many enemies as fans with his devil-may-care attitude and take-no-prisoners approach to the game and his life.

Trouble with the Curve

Clint Eastwood came out of an unofficial acting retirement to join Amy Adams, Justin Timberlake and John Goodman in this engaging tale of an aging baseball scout (Eastwood) for the Atlanta Braves, who receives unsolicited help from his estranged daughter (Adams) on a scouting trip after the team's front office begins to question the judgement of their one-time top scout.

Entertaining 1994 family film about a 12-year-old who inherits the Minnesota Twins franchise from his grandfather and makes himself the team's manager. Watch for a plethora of superstars from the Nineties making cameo appearances, including Ken Griffey Jr., Randy Johnson, Rafael Palmeiro and Paul O'Neill.

Winner of the Academy Award for "Best Screenplay," and directed by Sam Wood who previously helmed 1942's The Pride of the Yankees, this 1949 true story of major leaguer Monty Stratton starred James Stewart as the young pitcher who loses his leg in an accident and his attempts to get back to the majors despite his prosthetic leg.

Screen icon Edward G. Robinson joined Hollywood's baseball ranks as a New York Giants scout who finds a great young prospect, but troubles arise when the kid's father is hellbent on getting his son to college, not to the baseball diamond. Hall of Famer Carl Hubbell is just one of the era's superstars who makes an appearance in this often forgotten 1953 film that is now available through the Warner Archive Collection.

Popular screen comedic actor Joe E. Brown stars as Elmer Kane in this 1933 comedy about a small town slugger in Indiana who refuses to sign with the Chicago Cubs if it means leaving his the woman he loves behind. Knowing what's best for him, the girlfriend (Patricia Ellis) spurns him and Kane becomes a star for the Cubs. But when gamblers come to him to throw the World Series, things go sideways fast.

Joe E. Brown pulled out his bat and glove for another comedic race around the bases a few years after Elmer, the Great in 1935's even more popular Alibi Ike. Even more notable for movie buffs is the very first screen appearance to be released of future film immortal Olivia de Havilland.

Take Me Out to the Ball Game

With Hollywood musicals in full swing, America's national pastime received more than a few musical nods in the Forties and Fifties. In 1949, it was the grand slam pairing of Frank Sinatra and Gene Kelly in Take Me Out to the Ball Game. Ol' Blue Eyes and Crazy Legs play a double-play combo who split their seasons between the stadium and the stage for their vaudevillian act in this Busby Berkeley hit.

Don't Look Back: The Story of Leroy "Satchel" Paige

In this TV Movie from 1981, Lou Gossett Jr. plays the flamboyant pitcher Leroy "Satchel" Paige, the superstar of the early Negro Leagues (before Jackie Robinson broke the color-barrier in the major leagues in 1947). A tireless advocate for breaking the barrier in the years prior to 1947, by the time Paige got his chance in the majors, he was past his prime, making his debut at the age of 42. So talented was Paige, he was inducted into the Baseball Hall of Fame in 1971, the first player ever to be inducted based solely on his play in the Negro Leagues.

Babe Ruth was the biggest sports hero of the early 20th Century without peer. He was the Bambino, the Sultan of Swat, the undisputed home run king who literally saved major league baseball in the wake of the Black Sox Scandal in which some members of the Chicago White Sox took money to throw the 1919 World Series. But his life has never been credibly captured on film and this first effort in 1948 was more fiction than fact, including almost messianic scenes that stretch credulity to the absurd. Still it is a time capsule of early Hollywood-styled hero worship.

Angels in the Outfield

In this popular 1951 comedy, gruff Guffy McGovern (Paul Douglas), manager for the failing Pittsburgh Pirates is given a new lease on life from an unseen angel, who begins to turn the team's fortunes around provided McGovern curtails his foul mouth and combative nature. No easy feat, especially when newspaper reporter Janet Leigh breaks the story of Pittsburgh's angels in the outfield.

In this 2001 romantic comedy, Freddie Prinze Jr. is a pitcher in the Cape Cod scouting league intent on getting to the majors, but he falls for a girl (Jessica Biel) from a wealthy family who, of course, see better things than a struggling baseball player in their daughter's future. And, hey, you do get to see baseball greats Hank Aaron, Carlton Fisk and Ken Griffey Jr.

Major League: Back to the Minors

The third and final installment of the Major League comedy franchise, this 1998 outing has Scott Bakula playing the manager of the Minnesota Twins' Triple A farm club who becomes entangled in the lives of his struggling players and with the Twins' major league manager who has a vendetta against him. 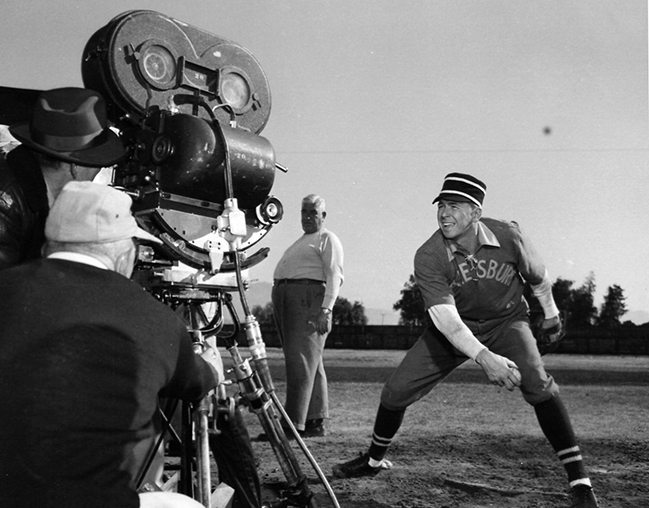 In one of his finest performances, Ronald Reagan (yep, THAT Ronald Reagan, pictured during filming) plays Hall of Fame pitcher Grover Cleveland Alexander, who struggles with double-vision after a head injury and later must deal with his subsequent alcoholism that threatens to destroy his career. With the help of his wife (Doris Day), Alexander makes a comeback and a legendary World Series appearance.