Can you tell us about how you got involved with composing the soundtrack for Warner Bros.’ Run All Night?
TH: While wrapping up the Mad Max: Fury Road score I got a call from Darren Higman [EVP Music, Warner Bros.] that Run All Night was potentially available to me. He described the movie so well to me that I got inspired to start writing music. I HAVE to write new music every day, so this was a fun little exercise, writing to “Darren Higman” words. After four days I actually saw the movie. It felt that the initial sketches would work great with the picture. After the screening I continued writing and crystalized the idea to one long suite with themes that I felt would work throughout the movie. A few days after that I finally met the director. Jaume [Collet-Serra] is a really nice very intelligent person who definitely knows his filmmaking. At the end of the meeting, I gave him a USB stick and whispered somewhat embarrassed: “My demo got a little out of control. Here are 55 minutes of music that I feel is your movie.” Later that night I got a phone call from Darren that the director loved the music and I got the job.

What can you tell us about the 55-minute sketchbook of your initial ideas for the film’s music?
TH: I researched many traditional hitman movies dating back to the Sixties. Ill professionale with Jean Paul Belmondo specifically stood out. Until the mid-Eighties′ themes for these movies were more emotional. Underscoring the results of their actions and how they felt about those actions. Moved but unmoved with their underlying dark, sad, lonely characters. This changed in the Eighties where themes became more “action.” This is still the trend now.
I felt this emotional approach worked very well for this picture. When we meet our characters in the beginning of the movie there should be disgust. But at the end of it we need to sympathize with them. I humbly feel this approach accomplished that with the sketchbook and when I explained my thoughts to Jaume, he concurred.
I would say a good 75% of the sketchbook made it to the movie in some way or form. Obviously with the help of great music editors Ken Karman and Nevin Seus. Also my great assistants Christian Vorlaender, Steve Peroni, and Emad Bourijan did great work conforming all this music when we only had four weeks to deliver.

Describe your approach to the Run All Night soundtrack, and what made it a unique movie to score.
TH: Continuing to thread on the above answer, I thought the film needed a character score. Create long cues that blend multiple scenes together so we stay with our main characters. It’s a melodic themed score that drives the storytelling. Obviously when a few helicopters and 150 policeman are approaching you on screen you need more than a piano and a cello, so I catered to those scenes with big orchestra score. But in addition to the suspense, I felt the underlaying story of two dads, their dark friendship and their estranged relationship with both their sons made this a great scoring challenge. I am very proud of the two main themes underscoring the leads. Those themes trickle down unto their sons. These four “family” members and the police officer are looking for redemption. And they all get it: Dead or alive!

What was the collaboration like between you and director, Jaume Collet-Serra?
TH: He’s a wonderful guy. Very sharp and clever, in tune and obviously knows how to make films. I feel he’s on his way to bigger things. Or he should be anyway. I loved the fact that we had this strong of a musical connection. It made this process seamless.

What was the collaboration like between you and Warner Bros.’ WaterTower Music?
TH: WB has turned into family. Paul Broucek [President, Music, Warner Bros.,] Darren Higman and previously Carter Armstrong who recently moved to Lionsgate and I have known since 2002. WB was receptive to me the first time I visited this town back in 2002. I always felt the people here recognized my talent and tried to give me a break. Carter and I worked on Catwoman in 2005 where I helped out on some action cues. Then Darren really saw an opening for 300: Rise of an Empire and Mad Max. Darren has this great talent of connecting the right people with one another.
Even though it is a big (and the best) studio it always feels intimate and creative inducing. I always know I’m working with very smart individuals that never lose track of creativity.
WaterTower Music is the extension, the music department. Motivated and eager to bring this music to the mainstream. I am honored to be working with such a great group of people. I mean look what they accomplished with the scores of my friend and mentor Hans Zimmer. Or on The Great Gatsby for instance. That’s similar to releasing artist hit records!

Some of your recent soundtracks include specific themes for characters (ex: 300: Rise of an Empire). Is that something we’ll hear in Run All Night?
TH: Run All Night is a character score with basically two themes. One for Sean, Ed Harris and one for Jimmy, Liam Neeson. 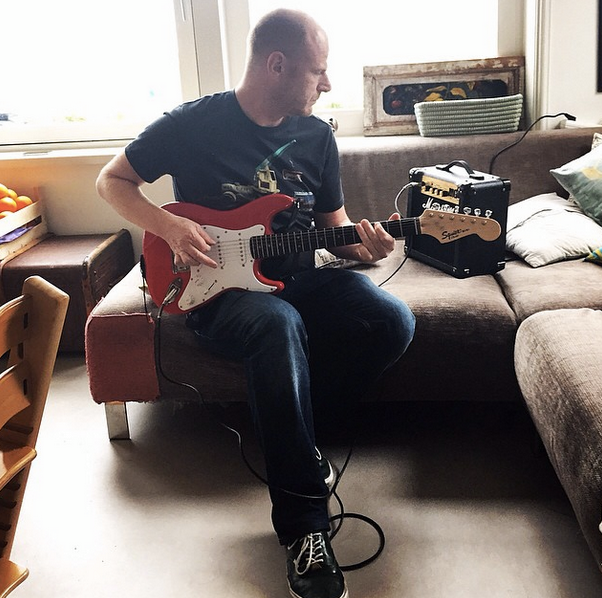 You are known for your experimentation in your music: whether that’s re-mixing Elvis or building an original piano/electric guitar hybrid like you did for 300: Rise of an Empire. What unique sounds or qualities can listeners look forward to in the Run All Night soundtrack?
TH: In this movie it’s the simplicity in the themes that draw the ear. Liam’s character is the broken piano. Ed Harris’s is the solo cello.
What’s unique about this particular sound palette is the sound design that I created from my own guitar recording and my voice. Those sounds were actually created a long time ago, but I pulled these sounds out of the vaults for use in Run All Night. The combination creates an eerie atmosphere that underscores the suffocation of the friendship and father/son relationships in the film. Also important are the dark sounds that come from my analogue synth. The world of the synthesizer sound has the ability to create huge emotional underscore.

What is it like to create a theme for a badass like Liam Neeson?
TH: In this movie he is definitely a baddass, but also a sad man. Quite dark. He is a good guy that got drawn into a bad card game. He can’t help himself, he can’t get out, he can’t stop playing the card game. As he states in the movie, “after years of this line of work you become what you are. You can’t just go home and take a shower and scrub it off.” But yes, creating a theme for a badass like Liam Neeson is pretty special. One of the last man’s man.

What part of the soundtrack, or scored scene in Run All Night, are you most excited for people to hear?
TH: I am particularly excited about Liam Neeson’s theme playing in its simplest form. It is the scene where he and Ed Harris are sitting in the bedroom after a Christmas party went out of control and Neeson says: “I can’t sleep no more Sean. I keep seeing those faces.”

What are some of the main differences–or similarities–in the process of creating a hit single versus a soundtrack for a film?
TH: Film is long form. Long emotional arcs play out musically. A pop track or dance track obviously is not. But, a good “tune” is a good “tune,” and in that way there are similarities. Both tunes need strong melodies. Seamless harmonic progressions and strong rhythms. And finally great technical sound production to finish it all off.
There are also similarities with playing live shows. When I used to perform the Junkie XL shows it was also always about the arc. From start to finish it needed to feel like a journey. It lifts you up and puts you down where needed.

We HAVE to ask you about Mad Max: Fury Road. Can you share anything about what we can look forward to hearing in that soundtrack?
TH: I can share the following. I wanted it to be a new “Rock Opera.” Over the top, simple, emotional, 1000 German tanks, one cello, 100 drummers, the sound of milk, 80 brass players, and a little music box. Make sense?

You’ve worked on a number of soundtracks for Warner Bros. films including The Dark Knight Rises, Man of Steel, Inception, 300: Rise of an Empire–and now you have Mad Max: Fury Road and Batman v Superman: Dawn of Justice for us to look forward to. Do you have a favorite track, theme or experience from working on those films that you can share?
TH: Mad Max is very special. Obviously the movie series itself and its iconic status in film history makes it special. It is hard to grasp the fact that I used to watch Mad Max as a child and now I am working on it. But what makes the experience truly special is George Miller. The finest mind I’ve come across. His intelligence, warmth and eye for detail is exceptional.
That last meeting after working for 15 months straight on the movie he said “Tom, it’s done, it’s wonderful, I’ve never been so happy with a score.” We hugged and I said I had to pee. I cried for 15 minutes in the bathroom. A wind whorl of emotions came out. The stress, the endless revisions and remarks. But also the extreme happiness to finish an epic saga like this and I lived to tell the tale. George pushed me along into the depths of my musical abilities where I sometimes felt lost. But then he was always there to guide me back to the light. A truly amazing director to work with. Not enough words can describe these 15 months.