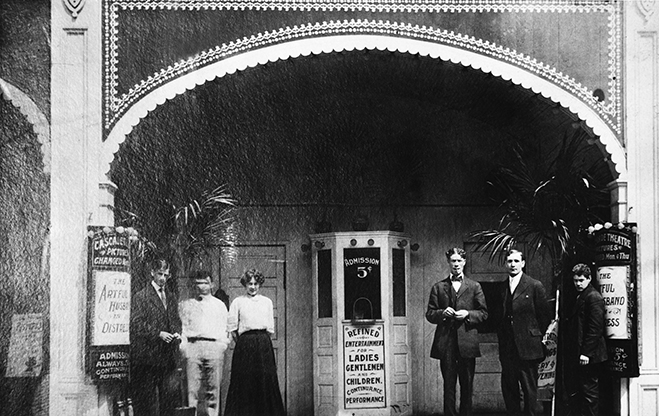 Today we're traveling back in time to February 2, 1907, and visiting The Cascade Theatre (seen above). Pictured second-from-right is Albert Warner—a founding Warner bro—standing in front of the building's entrance in New Castle, Pennsylvania. Opening to the public 111 years ago today, this Nickelodeon theater promised "the finest class of moving picture art with fine music at all times." As an added bonus, every woman attending the premiere received a carnation. Children were also welcome at The Cascade and would receive free admission and "the best attention and care" upon presenting a Cascade Theatre school card, on the Monday and Tuesday following opening day. 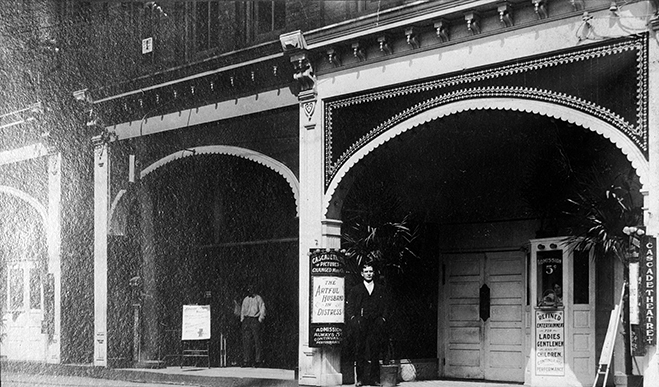 Located at 15 S. Mill Street, The Cascade was a converted store opened and run by the Warner brothers to play hand-cranked pictures run by Sam, while Jack would entertain the crowds with a song during intermission. Patrons watched silent films from the comfort of chairs on-loan from a nearby funeral home. Get to know more about the fascinating brothers Warner in our company history section.

The first permanent movie theater opened in Los Angeles on April 2, 1903. No longer relegated to traveling exhibitions or storefronts, motion pictures now had a home, thanks to The Electric and its owner Thomas Lincoln Tally. Tickets cost ten cents a piece and shows were regularly a sold-out affair.