Starring Academy Award winner Russell Crowe, who also makes his directorial debut, this Friday’s release of The Water Diviner, a movie based on the story of Australian farmer Joshua Connor who goes to Turkey to locate and return the bodies of his three sons who died in the Battle of Gallipoli at the end of World War I, got us thinking about other biopics in the Warner Bros. Film Library. So here are 25 cobbled together in five categories that you may want to check into.

The Right Stuff (1983): While this four-time Oscar winner doesn’t focus on merely one person, we will use any chance we can to introduce (or reintroduce) this amazing epic film about the early days of the American space program and the brave men who risked their lives in order for us to reach the stars, especially since it's now available on Blu-ray. The all-star cast is stellar: Sam Shepard as Chuck Yeager, Ed Harris as John Glenn, Dennis Quaid as Gordon Cooper, Fred Ward as Gus Grissom and Scott Glenn as Alan Shepard. Light this candle, flyboys! 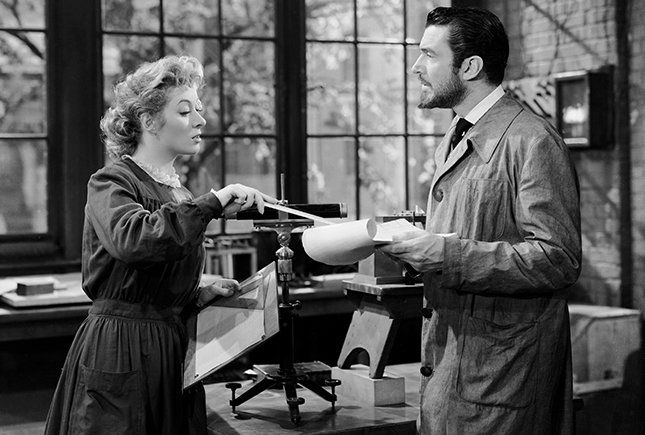 Madame Curie (1943): Don’t go thinking that explorers and adventurers have to be daredevils. Some of our greatest explorers never left the laboratory, such as Marie Curie, the first woman to win a Nobel Prize (ultimately she would win the award twice). Here she’s immortalized by Greer Garson with Walter Pigeon as her husband and scientific partner Pierre Curie. Both Garson and Pigeon (pictured above) received Oscar nominations for their performances and the film itself received a nod for “Best Picture.” 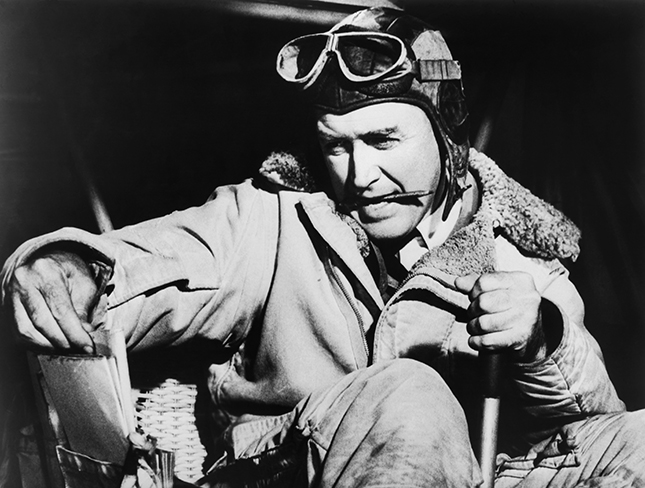 The Spirit of St. Louis (1957): James Stewart plays famed aviator Charles Lindbergh in this memorable film about Lindbergh’s legendary 1927 transatlantic flight from New York to Paris in his plane, Spirit of St. Louis. And to think that first flight only took a mere 33 hours, compared to about eight hours today. 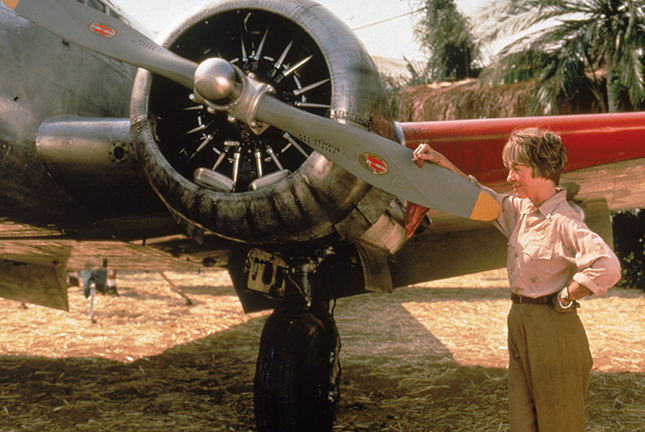 Amelia Earhart: The Final Flight (1994): And let’s balance up the gender wars with this TV Movie about famed aviator and feminist icon Amelia Earhart who was portrayed by Oscar-winning Diane Keaton in this TV Movie. Keaton received Golden Globe and Emmy nominations for her portrayal of Earhart, focusing on her final flight and mysterious disappearance in 1937. . 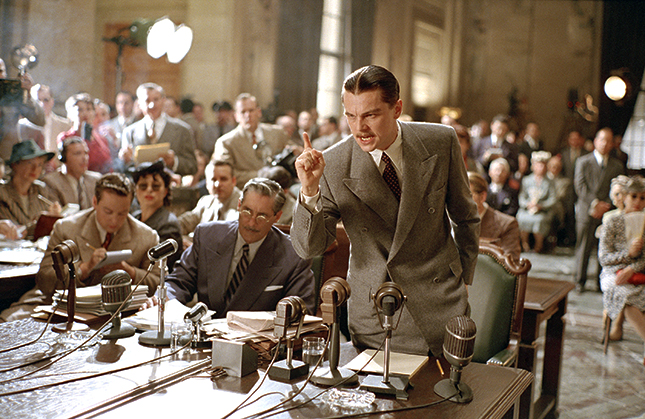 The Aviator (2004): Nominated for 11 Academy Awards (winning five of them), this elaborate biopic of the mysterious and flamboyant Howard Hughes—the business tycoon, inventor, aviation pioneer and film producer—covers a 20-year span between the 1920s and 1940s. Leonardo DiCaprio gives a stirring performance as Hughes, and Cate Blanchett picked up an Oscar for her role as screen legend and one-time Hughes girlfriend Katharine Hepburn.

Amadeus (1984): Winner of eight Academy Awards, including “Best Picture,” Amadeus is a portrait of the mad musical genius Wolfgang Amadeus Mozart (played by Tom Hulce) as seen through the envious eyes of the talented but somewhat also-ran composer Antonio Salieri (F. Murray Abraham won the Oscar as Salieri), who uses his royal connections to hinder Mozart’s career. 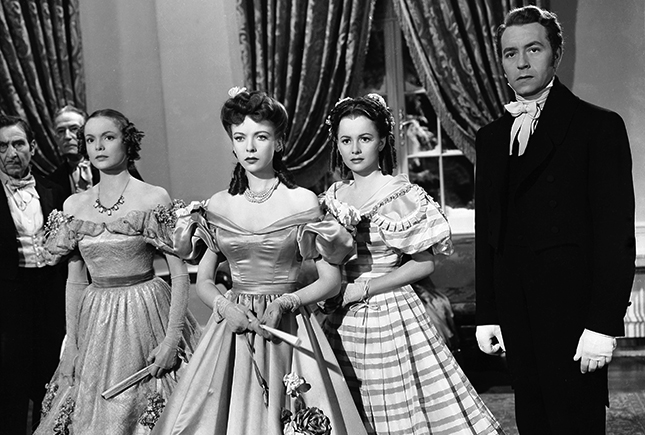 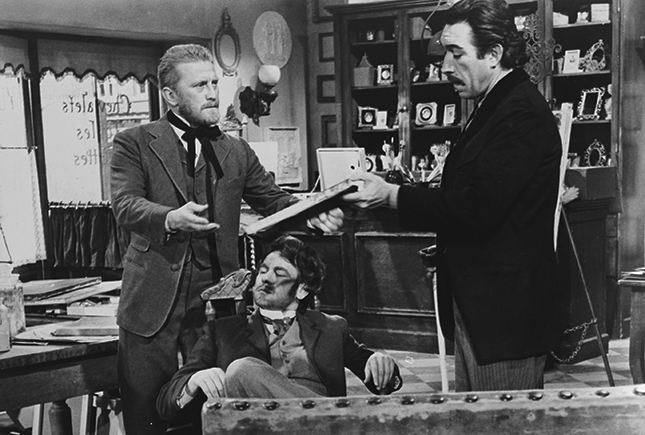 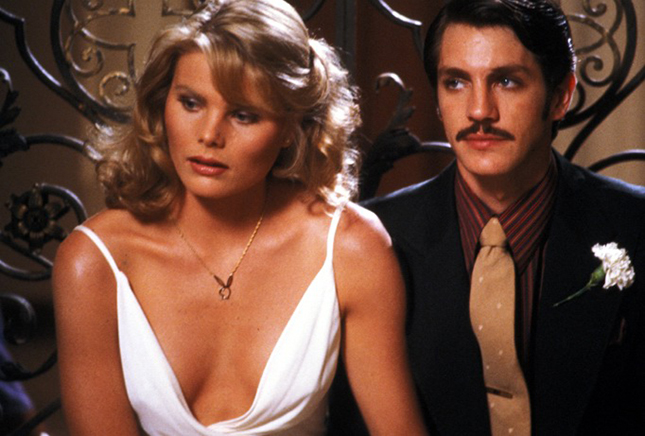 Star 80 (1983): The tragic story of Dorothy Stratten, Playboy’s “Playmate of the Year” in 1980 and acting hopeful, who was murdered by her estranged husband Paul Snider. Stratten is played by Mariel Hemingway, but Eric Roberts steals the show as the slimy Snider who Playboy founder Hugh Hefner (played here by Cliff Robertson) called “a hustler and a pimp.” The film has grown in stature since its original theatrical release. 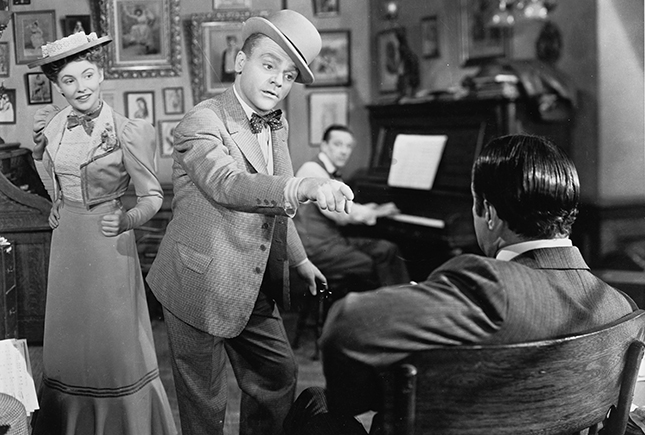 Yankee Doodle Dandy (1942): More of a “bio-musical” than a biopic, this 1942 classic tells the tale of George M. Cohan, an American composer, singer, dancer and producer; the quintessential song-and-dance man. In the pre-World War I era, Cohan was known as “the man who owned Broadway.” James Cagney stars as Cohan in one of his most memorable and Oscar-winning roles. In fact, Yankee Doodle Dandy was so popular that it was Warner Bros. most successful film up to that time.

Bonnie and Clyde (1967): A controversial film for its era, in terms of the amount of violence shown onscreen and what many felt was the glorification of the criminal lifestyle, Bonnie and Clyde was the forerunner of a slew of “anti-hero” movies that cropped up throughout the late Sixties and early Seventies. Nominated for ten Academy Awards, including “Best Picture” and for five of the actors (including Warren Beatty and Faye Dunaway in the title roles, as well as Gene Hackman, Michael Pollard, and the sole winner Estelle Parsons), it’s funny to realize that then-studio head Jack Warner didn’t think the movie had any potential. 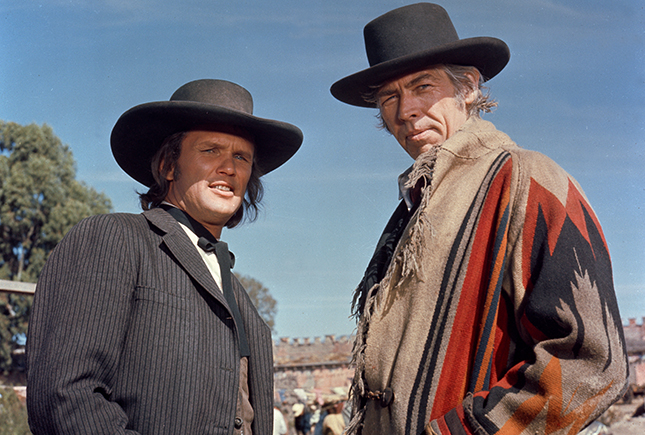 Pat Garrett & Billy the Kid (1973): Sam Peckinpah’s cinematic tale of the relationship between lawman Pat Garrett (played by James Coburn, right) and his old acquaintance William Bonney (aka the outlaw known as Billy the Kid, played by Kris Kristofferson, left) had two lives (unlike the title characters). The first was the unsuccessful theatrical run in 1973, in which Peckinpah and MGM fought over the final product with the final result being one that both Peckinpah and the cast disavowed. Peckinpah’s original cut of the film was released on DVD in 2005 and the film has become the classic that Peckinpah originally envisioned.

Helter Skelter (1976): On an otherwise uneventful weekend in August of 1969, the city of Los Angeles—and later the world—would be shocked by two incidents of seemingly unrelated bloody and violent murders perpetrated by a lost band of hippies known simply as “The Family.” Led by a former small-time convict named Charles Manson, the group was behind the infamous “Tate-LaBianca murders.” The story itself is so incredible and the lengthy trial so unbelievable that it would take this three-hour-plus  TV Miniseries to explain it all. Steve Railsback is stunningly chilling as the murderous cult leader and George DiCenzo is excellent as the tenacious prosecutor Vincent Bugliosi, who takes the viewer on one of the most twisted investigations in the annals of crime. More than 45 years after the senseless murders, Helter Skelter is still powerful viewing. 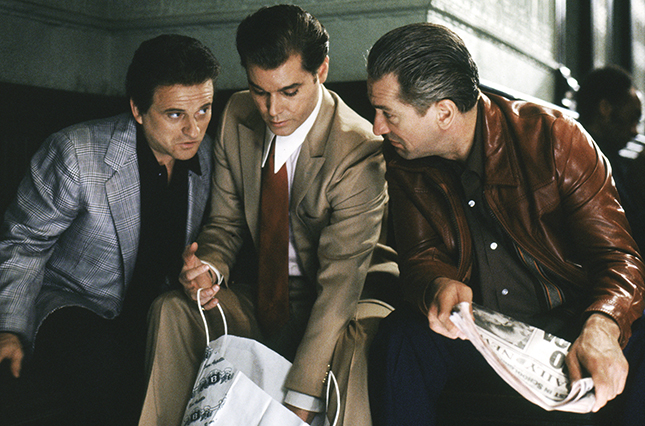 Goodfellas (1990): Ray Liotta plays mobster-turned-informant Henry Hill in Martin Scorsese’s brilliant Goodfellas. Also starring Robert De Niro and Joe Pesci (in his Oscar-winning role as the psychotic enforcer Tommy DeVito), the power and impact of Goodfellas on the crime/mob genre cannot be underestimated. At turns comedic and calm, at others voyeuristic and violent, it’s no wonder that David Chase, the creator of one of television’s greatest series The Sopranos, held the film in such esteem. A movie that's an absolute must for your personal bucket list. 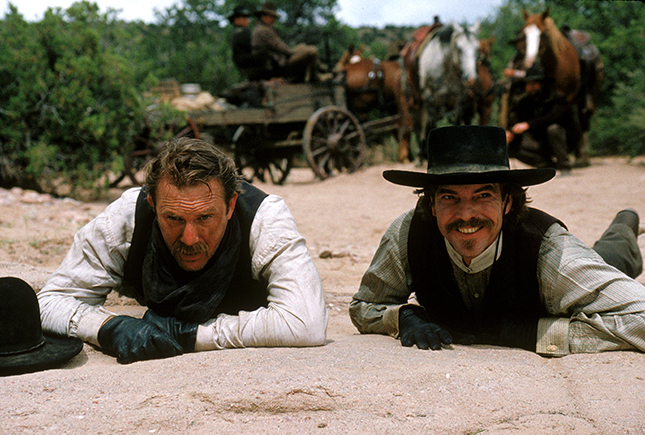 Wyatt Earp (1994): One of those Old West “gray hats,” lawman Wyatt Earp was at turns a gambler, saloon-keeper, bouncer and sheriff. Kevin Costner plays Earp (left), who is perhaps best known—along with his brothers and Doc Holliday—for the most famous Wild West shootout in history known as the “Gunfight at the O.K. Corral.” The cast is impressive, including Gene Hackman, Isabella Rossellini, and the scene-stealing Dennis Quaid as Holliday (right).

The Life of Emile Zola (1937): The very first Warner Bros. film to win the coveted “Best Picture” Oscar, Paul Muni starred as the French author Emile Zola who took on the French government and military in an attempt to exonerate French army officer Alfred Dreyfus who was put on trial and convicted of treason. By publishing an article accusing the army of this injustice, Zola is put on trial for libel, which he sees as the best way to get Dreyfus cleared of his treason conviction. 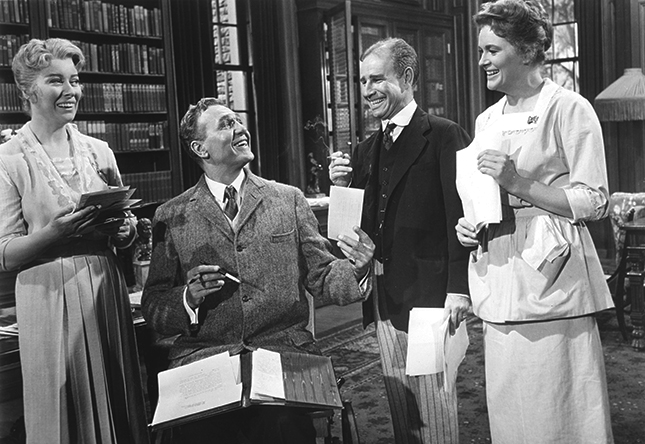 Sunrise at Campobello (1960): Future president Franklin Delano Roosevelt was only 39 year old when he was stricken with paralysis in the summer of 1921 at the family vacation home at Campobello Island on the Canada/Maine border. Some say polio, while others more recently say Guillain–Barré syndrome, but whatever the cause, FDR would fight and conceal this physical limitation to the public at large throughout his life and four-term presidency. This 1960 film was the first glimpse the American public got into the reality of FDR’s situation up until that time. Pictured above: Greer Garson (as Eleanor Roosevelt), Ralph Bellamy (as FDR), Hume Cronyn (as FDR’s confidante Louis Howe) and Jean Hagen (as FDR’s private secretary Missy LeHand). 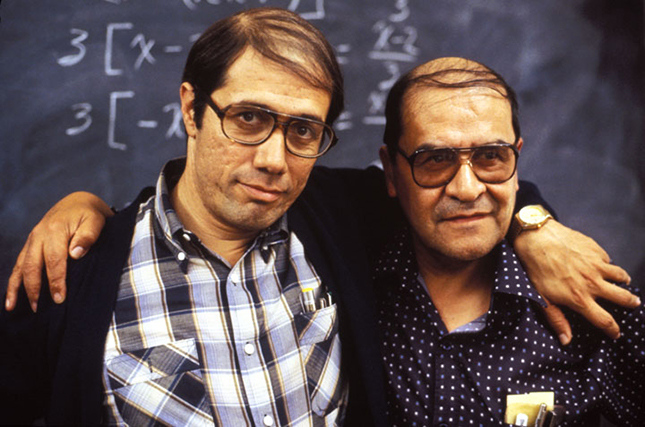 Stand and Deliver (1988): Edward James Olmos (left) received a “Best Actor” Oscar nomination for his portrayal of high school math teacher Jaime Escalante (right) in Stand and Deliver. Teaching high school in East Los Angeles is no easy feat, but Escalante raises the bar, determined to get his students to pass the difficult AP Calculus exams. He overcomes the naysayers on the teaching staff, but then must go up against the testing organization that questions the success of his students. A very powerful film that’s as important today as it was in 1988, if not more so. 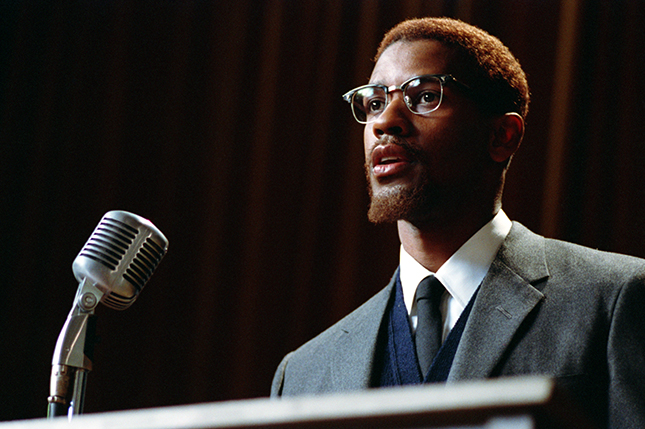 Malcolm X (1992): Denzel Washington becomes the controversial civil rights activist Malcolm X under the superb direction of Spike Lee. Following his life from his criminal past and time in jail to his conversion and subsequent separation from the Nation of Islam, and his changing views regarding race relations, Malcolm X remains riveting and thoughtful entertainment at its best. 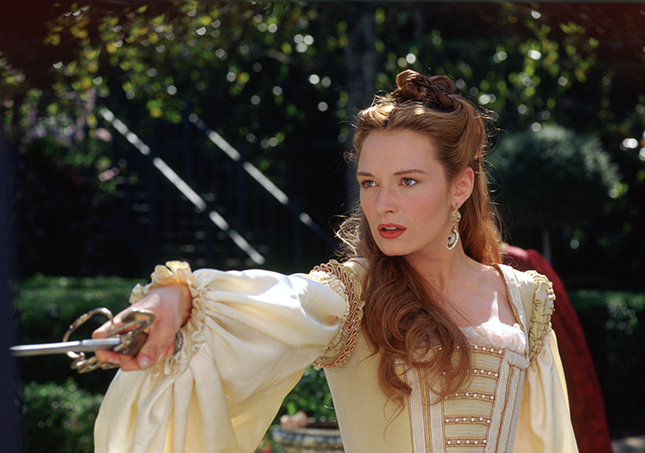 Dangerous Beauty (1998): An undervalued film about 16th Century Venice courtesan Veronica Franco, who becomes a favorite of the city’s most rich and powerful men, as well as the King of France, only to later become the target of the Inquisition. This dramatic and romantic period piece features an impressive cast, including Catherine McCormack (as Franco), Naomi Watts, Jacqueline Bisset, Rufus Sewell, Oliver Platt, Fred Ward and Moira Kelly.

American Sniper (2014): The highest-grossing war film in history is an intense look at war and its impact on the brave men and women who fight them and the families left behind. Bradley Cooper received an Oscar nomination for his performance of Navy SEAL Chris Kyle, and the film itself was nominated for “Best Picture.” Director Clint Eastwood's film is so powerful that it’s not really surprising that current and former servicemen and women have been standing and saluting the screen in theaters around the world as the credits roll. 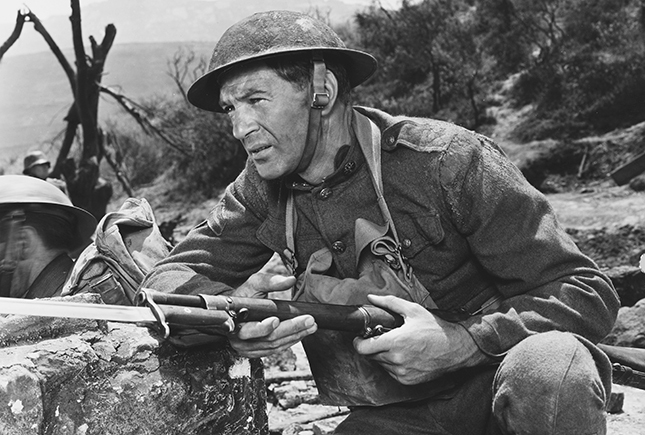 Sergeant York (1941): Alvin York was one of most honored American soldiers during World War I, including receiving the Medal of Honor, and the movie about him—Sergeant York starring Gary Cooper—was the highest-grossing film of 1941. Cooper would win the Academy Award for his portrayal of York and audiences flocked to see the soldier’s heroic wartime actions after America was attacked at Pearl Harbor later that same year. 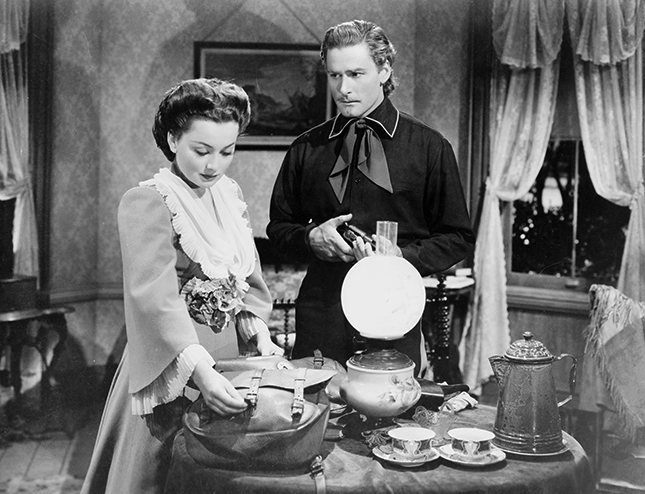 They Died With Their Boots On (1941): While this 1941 western starring Errol Flynn as General George Armstrong Custer plays a bit loose with the facts, the film itself is an entertaining one, and it’s also the final collaboration between Flynn and longtime co-star Olivia de Havilland. The title of the movie was a little too accurate as three men actually died during the filming, including an extra who fell from his horse and impaled himself on his own sword. 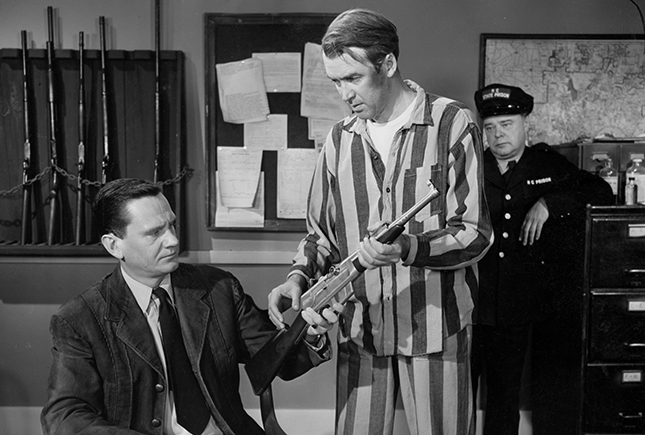 Carbine Williams (1952): James Stewart stars as David Marshall Williams, who helped invent the M-1 Carbine rifle that was used extensively during World War II. It was while serving out a 30-year prison sentence for murder that Williams eventually found work in the prison’s tool shop and invented the gas system for the soon-to-be famous rifle. 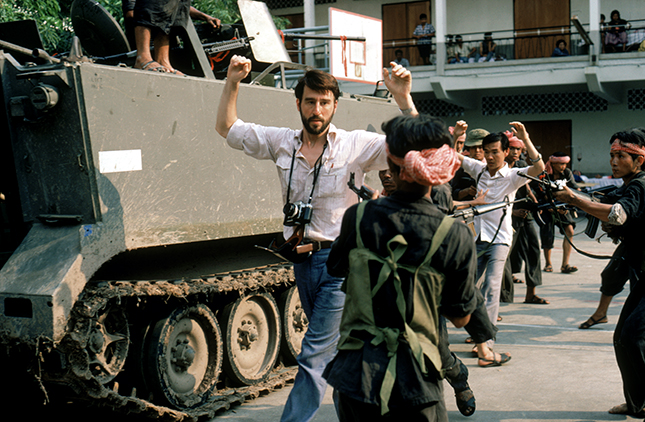 The Killing Fields (1984): This compelling film details the experiences of two journalists Sydney Schanberg (Sam Waterston) and Dith Pran (Haing S. Ngor in his Oscar-winning performance) during the Cambodian civil war near the end of the Vietnam War. With John Malkovich (as photojournalist Al Rockoff) and Julian Sands (as journalist Jon Swain) also involved, The Killing Fields is overloaded with talent; not to mention suspense, heartache and  redemption.

- Take Me Home to the Ball Game
- World Cup Alternative