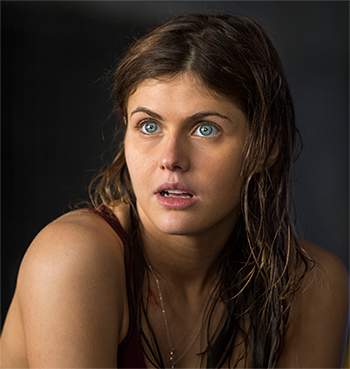 Get used to seeing Alexandra Daddario's lovely face because you'll soon be seeing it everywhere! She's starring with Dwayne Johnson in the summer blockbuster San Andreas, opening in theaters May 29. She's currently filming The Layover (with Kate Upton, directed by William H. Macy) and has co-starred in the Disney franchise Percy Jackson films, Texas Chainsaw 3D, and was a breakout star in the HBO series True Detective with her provocative turn as Lisa. She'll also soon be seen in director Joe Dante's Burying the Ex, which recently premiered at the 2014 Venice Film Festival.

On May 16 her day began bright and early in downtown Los Angeles with the San Andreas press conference kicking off a day-long marathon session of interviews, a Twitter Q&A, posing for photos and just being all-around ready for anything. Daddario graciously sat down with WB.com and discussed the importance of family, facing disaster, women in Hollywood and getting mouth-to-mouth from The Rock.

First off, congratulations on the role and the great job you did with it. You play Blake, the daughter of Ray (Dwayne Johnson) and Emma (Carla Gugino), and you're caught in an earthquake that's wreaking havoc up the state of California.

One of the aspects of the film that I found really touching is the bond of family and I felt in a lot of ways the drama of the earthquake story was parallel to the story of a family finding itself again on many levels. Would you agree with that?
AD: I do, and I think that one of the things that happens when we're in situations like that—and I've been saying this because the closest feeling that I have related to an earthquake like this or a disaster like this is 9/11.
I grew up in New York City and I've never experienced a feeling like that before or after that day or the weeks after that. And it's extraordinary because everything that mattered to you the day before doesn't matter to you anymore. It really puts everything in perspective. I think about what's important and what you need.
I think the determination my character, and my mother's determination and my father's determination for us to find each other is not only about ourselves but about wanting the other people in our lives to be happy and not be scared and not lose each other. We have a responsibility to each other. That's sort of what drives our story.
And you're saying that there's sort of a parallel between that and the earthquake; Yeah, you know I think Blake and Ben (Hugo Johnstone-Bur)—my love interest—we sort of discover each other through this disaster and my parents get back together through it. A disaster took them apart and a disaster throws them back together. And I think it shows you what's important.

Blake is very much a mirror of both her parents. She's a leader, she's resourceful, she perseveres. It was great to see a female character take two males characters under her wing and become the hero, so to speak. I was wondering if that was something that drew you to the role?
AD: Yes! I loved this movie for a variety of reasons. I loved the role because she struck me as being a real person. Sometimes we tend to sort of make a character too one note. They're either scared or they're strong. Or they're either "this" or "that." But as human beings we're a combination of all kinds of things and sometimes when Blake is acting strong she sometimes feels very weak

She does have a very vulnerable side.
AD: Yeah. And I think that that's a kind of strength. If you aren't able to be weak, you can't be strong. I don't think that bravery is the absence of fear. I think it's persevering despite it. So I think that that's what makes her whole and you see that with Blake and with Emma and Ray. They're so scared of losing me but you sort of have that determination and that's what makes you brave and strong and human.

Do you feel an obligation to choose empowering roles?
AD: That's interesting. I wouldn't say I feel an "obligation." I feel an obligation to myself to choose roles that I really like and respond to and I also feel an obligation to choose roles that I think will help my career to get me to do the things that I want to do. Because I think the more powerful I get in my career, the more powerful I'll be as a person and I can create the things that I want to create.
But I do think there's a lot of discussion about women's roles and women behind the camera and what is happening in Hollywood and I like that there's that discussion a great deal because I think that it's making things change as far as female-driven films and more roles for women and the way that women are written. It's very exciting to be part of a film in which the characters can influence young women to say, "Here's someone who's tough, and I can be tough and I can be a leader and I can be strong."
And I think as someone who felt very vulnerable and weak growing up for whatever reasons knowing, "Okay, you can be strong, you don't have to be any one way. You can be all that inside you." I think that that's very important. And I think that movies like The Hunger Games—and Jennifer Lawrence is a great example—but one of many, you really have these very strong women who are role models for young girls.

It's very exciting to be part of a film in which the characters can influence young women to say, 'Here's someone who's tough, and I can be tough and I can be a leader and I can be strong.'

As we were speaking about family earlier, I had read that your real-life dad was head of the New York City police counter-terrorism unit for a time. In terms of research, did you discuss this role and film with him in regards to how people behave in times of crisis and disaster?
AD: You know I did not ask him that question. I've always found the stories that my father told to be extremely interesting. He was a prosecutor for years and years before he worked in counter-terrorism. I find my father to be someone who responds very calmly to pressure. But I think he's also seen all different kinds of people and different kinds of situations. His stories are quite fascinating. It's an interesting question. I didn't think to ask him specifically—I do think that his experiences have made him one of those people who would react very calmly in times of of crisis. His thing is "How do we fix this? What do we do?"

Okay, last question. I made a promise I would keep it professional but I have to ask...
AD: (with horrified look on her face) Okay, I can handle it...

What was it like to touch The Rock's muscles?
AD: (Laughter and visibly relieved) I was expecting something really different! I don't know that I physically reached out and touched them but, you know, he held me. It's quite a feeling! I mean, it's awesome because you feel like, "Okay one of the biggest movie stars on the planet is carrying me and it's awesome." It's wonderful to be in this movie because you feel incredibly small and incredibly big because you're part of this thing that's much bigger than you, and The Rock, and the whole thing, and the visual effects... But you also feel so powerful and big because you're in this cool movie and The Rock is carrying me and giving me mouth-to-mouth and really it's...interesting. It's a cool feeling.