It's been 26 years since the Joker asked Batman, "Have you ever danced with the devil in the pale moonlight?" The Tim Burton-directed film premiered June 23, 1989 and forever changed the way superhero films have come to be created in Hollywood. By today's standard the 1989 Batman may look lighter and brighter than your Caped Crusader blockbuster of today but look at the film through the lens of 1989 and you'll see an antihero Batman with a darker edge and its roots in Frank Miller's The Dark Knight Returns graphic novel. 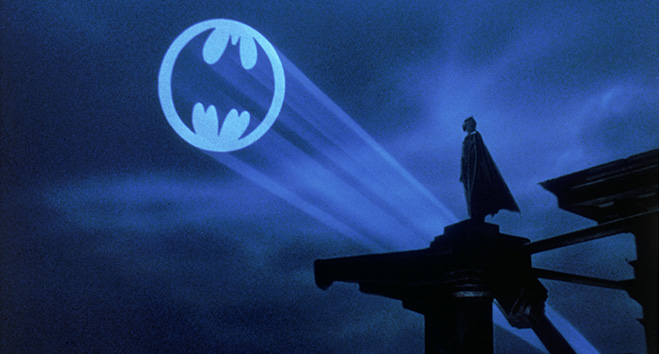 When it was announced that not only was Burton directing but that Michael Keaton would be starring in the film, fans of the comic were wary. Burton was known for directing Pee-Wee's Big Adventure and Keaton was a comedic actor best known from Mr. Mom and Beetlejuice (also directed by Burton). Could they be trusted to bring the true vision of the original comic books to the screen or would it veer into the world of the campy 1960's television series?

Fans taking umbrage to Keaton's casting wrote letters en masse (approximately 50,000—and, remember, this was before the internet) to Warner Bros. in protest. To quell any anxiety and prove that the cast and crew truly understood the material, a teaser trailer was quickly released that was met with such positive fan reaction that people began buying tickets to movies just to watch the trailer (again, we're talking pre-internet).

1989's Batman also holds the distinction of being the only film in the series with just one villain for our hero to contend with. Jack Nicholson plays a psychotic Joker, intent on poisoning Gotham by lacing hygiene products with a deadly chemical called Smilex. Not only was the Joker wreaking havoc and spreading terror throughout Gotham but Batman comes to discover that the Joker (a.k.a. Jack Napier) is also the man who murdered his parents as a small child. Now the vendetta is personal.

Upon its release in theaters, Batman met with enthusiastic audiences and became the second-most popular movie of 1989, behind Indiana Jones and the Last Crusade. Some fans felt this version of the hero they had come to understand for so many years flipping through the pages of their comic books was actually too dark, as Batman kills his enemies in the film—a crime the comic book Batman never committed. Nevertheless, the film was a bona fide hit and led the way to a franchise that continues strong to this day. The film went on to win an Academy Award for Best Film Direction, which was awarded to Anton Furst and Peter Young. Furst also designed the iconic Bat Symbol poster that intrigued so many curious fans prior to release.

For being 26 years old, the film stands the test of time and is owed a debt of gratitude by the superhero movie genre of today. Take a Batmobile-fueled ride down memory lane and watch the original theatrical trailer. For more photos of the cast and behind-the-scenes images, click through to the title page.

Between 1989 and 1997 there have been four Batman films made: Batman (1989), Batman Returns (1992), Batman Forever (1995), and Batman & Robin (1997). The franchise was successfully rebooted in 2005 under Christopher Nolan's direction with Christian Bale as Batman with Batman Begins as the first installation. The Dark Knight (2008) and The Dark Knight Rises (2012) followed-up to massive acclaim. Zack Snyder is the next director to take the helm as superhero squares off against superhero in Batman v Superman: Dawn of Justice, with Ben Affleck taking over as the Caped Crusader, which will hit theaters on March 25, 2016.