Nobody could have predicted those eighteen years ago what would happen over the next decade as six more books about the young wizard and eight blockbuster films would take the world by storm. The book series has sold more than 450 million copies and the Warner Bros. film franchise has pulled in nearly $8 billion in global receipts.

And now with the various theme parks, attractions, studio tours, and a seemingly endless supply of official Harry Potter merchandise that have sprung up, the Harry Potter phenomenon continues to this day. Rowling announced today that a new play Harry Potter and the Cursed Child will hit the stage in London next year. Not to mention that the wizarding world spin-off, Fantastic Beasts and Where to Find Them, which is slated to arrive in theaters in November of 2016. Based on Rowling’s 2001 book of the same name, Fantastic Beasts is set 70 years before the original Potter tales began. Oscar winner Eddie Redmayne will star in the lead role of Newt  Scamander, alongside Katherine Waterston playing Porpentina, with Rowling herself penning the script.

Other Potter News From Florida to France

The Wizarding World of Harry Potter at Universal Orlando Resort celebrated its fifth anniversary this month, smashing Universal's attendance records every year since the grand opening in 2010. During those years, the park has also sold more than 11 million Butterbeers, two-and-a-half million chocolate frogs, more than a million boxes of Bertie Bott’s Every Flavour Beans and millions of wands. Potter fans on the West Coast will be getting their own taste with The Wizarding World of Harry Potter at Universal Studios Hollywood slated to open in the Spring of 2016. 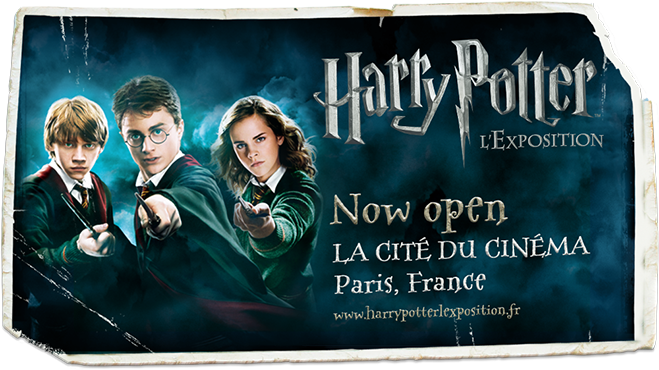 Warner Bros. Consumer Products’ Harry Potter: The Exhibition, which opened just two months ago at La Cité du Cinéma in Saint Denis, Paris, is the must-see exhibition of the season in the City of Lights, having welcomed over 200,000 visitors so far. The more than 2,000-square-meter exhibition offers France’s Harry Potter fans an immersive look into the famous wizarding world. Since its highly successful premiere in Chicago in 2009, The Exhibition has been presented in a variety of major cultural and entertainment institutions and museums in cities around the world, including Boston, Toronto, Seattle, New York, Sydney, Singapore, Tokyo, Cologne and Norrköping, Sweden, and has been seen by more than three million visitors. The exhibition at La Cité du Cinéma is open through September 6.

And always remember that you can always feed your Potter habit 24/7, 365 days a year at the Official Harry Potter Shop.