Going on a family road trip this summer and need an extra set of eyes to let you know about traffic jams, street closures, police activity and when to take that next left turn? Waze has you covered. And now you can bring along Rusty Griswold (the voice of Ed Helms) from this summer's Vacation comedy as your driving companion!

You can download Waze for your smartphone from iTunes and Google play. 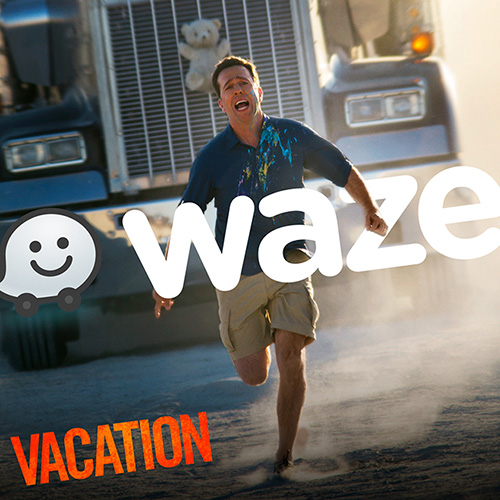 From the App head to: Settings > Sound > Voice > Rusty Griswold

And if it's an entirely new vehicle you're in the market for, you may want to think twice before purchasing Albania's finest—The Tartan Prancer. Yes, it does come complete with an incoherent key fob with symbols including a top hat, rocket ship, rabbit and the rather random letters Nj, dh and ç but it's also prone to flipping over, running out of gas after an hour despite its two (yes, two) gas tanks and belittling you in Korean.

The Prancer also has a retractable power cord (hey, it's energy efficient!), but...the Albanian plug is in the shape of a corkscrew. Seen any corkscrew-shaped outlets lately?

The driver's seat swivels a full 360 degrees. That could maybe be a cool feature but probably one that should only engage when the vehicle is in park. Driving on the freeway? Not so much.

Thinking all this technology has just gone too far? Maybe it's time to stick to something older and more reliable. Something like the original Vacation's Queen Truckster. For this 2015 Vacation the woody station wagon is back making a special cameo. Chevy Chase commented upon seeing the avocado green beast once more, "I wet my pants when I saw it again. But the color is still as hideous as I remember."

The Truckster appearing in the film actually belongs to a family from Georgia—with the last name Griswold, appropriately enough—who built a replica of the vehicle and drive it on their own cross-country road trips and were thrilled to loan it to the filmmakers.

Meet the new generation of Griswolds as they trek to Walley World when Vacation opens in theaters on July 29.