As the final quarter of 2015 is now underway, we thought we’d bring you up to speed on just a few of the upcoming movies that have recently been or currently are in production. Most of these films don’t have release dates as of yet (heck, one doesn't have a confirmed title at this point!), so be sure to visit the substantial "Up and Coming Releases" list in our In Theaters/Coming Soon section which is updated regularly. 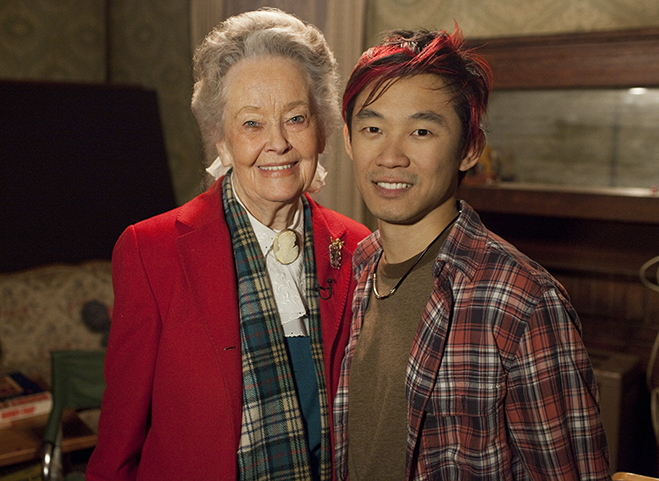 Director James Wan recently kicked off production in Los Angeles for his sequel to the record-breaking blockbuster The Conjuring. This supernatural thriller once again focuses on another real case from the files of renowned demonologists Ed and Lorraine Warren (pictured above with Wan on the set of the original Conjuring film). Reprising their roles, Oscar nominee Vera Farmiga and Patrick Wilson as the Warrens travel to north London this time around to help a single mother raising four children alone in a house plagued by malicious spirits. The Conjuring 2 arrives in theaters next June. Get more info.

Shooting began in August in New York City for director Zach Braff’s comedy, Going in Style. Starring THREE Oscar winners—Morgan Freeman (pictured in Million Dollar Baby), Michael Caine (in The Dark Knight) and Alan Arkin (in Firewall)—as three lifelong buddies who lose their retirement pensions and decide to rob the bank that absconded their money, Going in Style is slated for release next May. Get more info.

Set in the wizarding world of the Harry Potter series, which became the highest-grossing film franchise in history, filming began this past August at Warner Bros. Studio, Leavesden, with veteran Potter director David Yates at the helm. The film not only stars Oscar winner Eddie Raymayne (pictured in Jupiter Ascending), Colin Farrell (in Winter's Tale) and Katherine Waterston (in Inherent Vice), but Potter creator J.K. Rowling makes her screenwriting debut. Fantastic Beasts and Where to Find Them arrives in theaters November 18, 2016. Get more info.

Oscar winner Tom Hanks (pictured in Cloud Atlas) takes on the role of Captain Chesley “Sully” Sullenberger, the pilot who safely landed his plane in the "Miracle on the Hudson" incident of 2009, saving all 155 people onboard. Iconic screen legend Clint Eastwood directs, following up his directorial box-office bonanza American Sniper. No release date for Sully has been announced at this point. Get more info.

Katherine Heigl takes on a far different role than she did in Life As We Know It (pictured) when she stars in this dramatic thriller. Veteran producer Denise Di Novi takes the director reins for the first time in this story of a divorced wife and mother (Heigl), whose jealousy of her ex’s new wife (Rosario Dawson) turns pathological and results in a living nightmare for her former husband, her daughter and the new wife. Currently in production, no release date has been announced as of yet. Get more info.

Filming has begun in Atlanta, Georgia for New Line Cinema’s upcoming comedy starring Ice Cube (pictured in Lottery Ticket) and Charlie Day (in Horrible Bosses 2) as high school teachers who prepare to resolve their differences the old-fashioned schoolyard way. Directed by Richie Keen, Fist Fight has no release date at this time. Get more info.

And we'll wrap things up with another New Line Cinema comedy that has begun principal photography in Los Angeles. The yet-to-be-titled film stars Will Ferrell (pictured in Get Hard) and Amy Poehler (in Mr. Woodcock) with Andrew Jay Cohen in the director's chair. After losing their daughter’s college fund, Ferrell and Poehler start an illegal casino in the basement of their neighbor’s house. No word yet on a release date. Get more info.