Remember when we were celebrating the joys of summer? Now we're back to the days of twinkling lights, early sunsets and swooshing downhill. And while winter may not be everyone's favorite season, there's still a lot to enjoy about snow flurries, merry making, and traveling by sleigh (which seems to happen only in the movies). So warm yourself by the fire, enjoy a cup of cocoa and take a walk through our Winter Wonderland.

The Affair of the Necklace 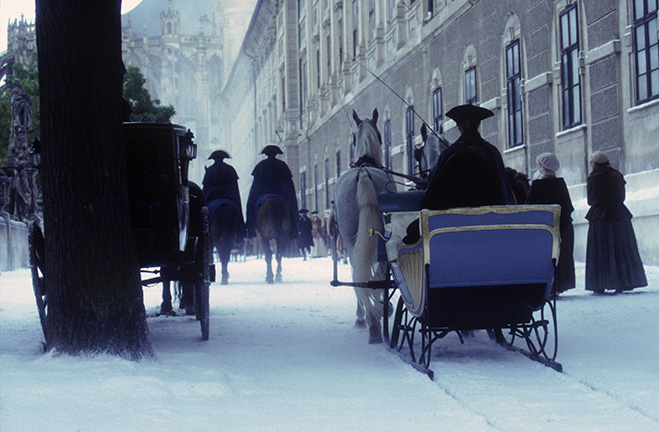 Hilary Swank starred in this intriguing historical drama that, through various twists and turns, helped lead to the French Revolution. 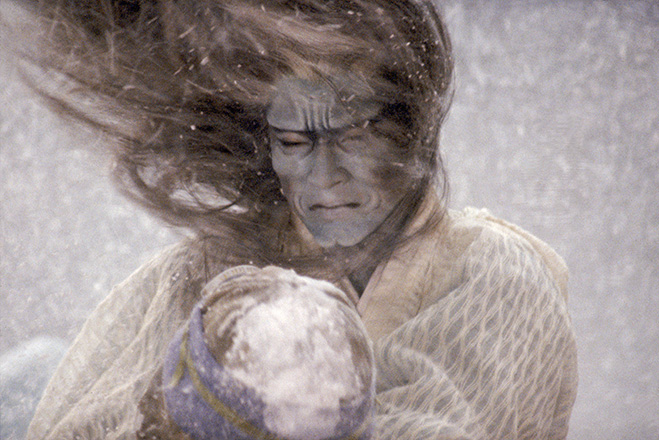 During one of the eight dream "episodes" featured in Akira Kurosawa's Dreams, Mieko Harada appears as The Snow Fairy during "The Blizzard" segment.

By the Light of the Silvery Moon 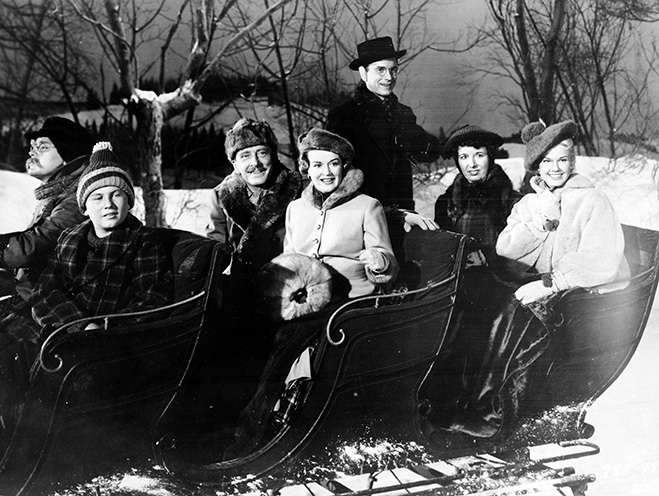 Gordon MacRae, Billy Gray, Leon Ames, Rosemary DeCamp, Mary Wickes, Doris Day and Russell Arms travel over the river and through the woods in By the Light of the Silvery Moon. 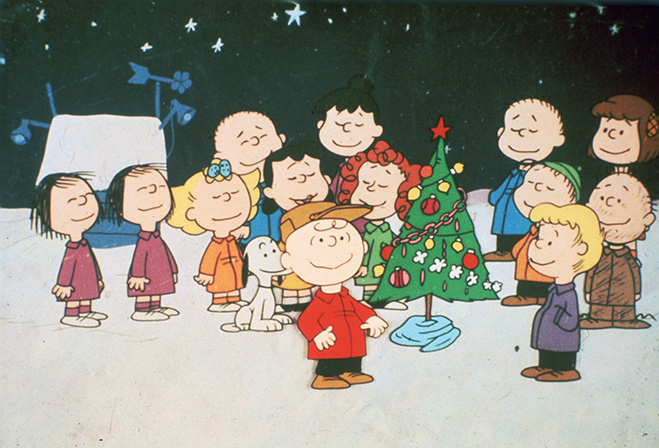 Celebrating it's 50th anniversary this year, A Charlie Brown Christmas remains a perennial favorite for families worldwide as a hallmark of the season. 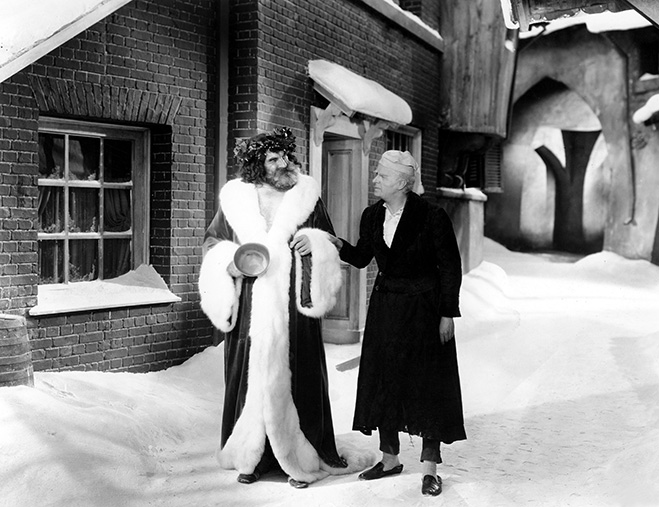 Ebenezer Scrooge (Reginald Owen) tours the snowy streets of London—and his own past—in A Christmas Carol (1938). 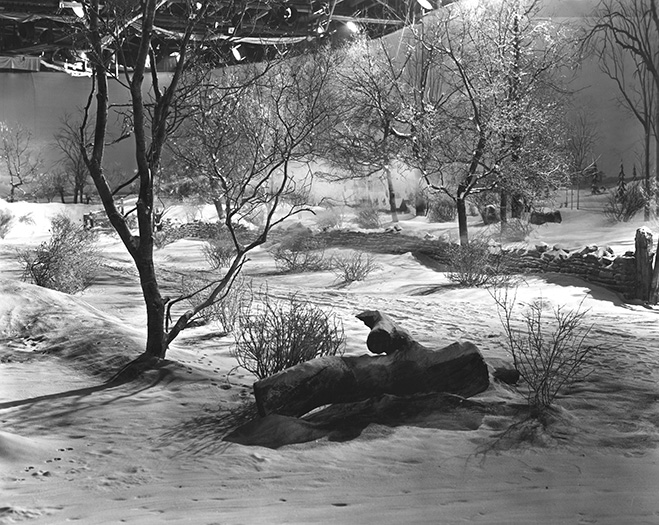 Sometimes snow is prettiest when its fake, like this set used for Christmas in Connecticut (1945). 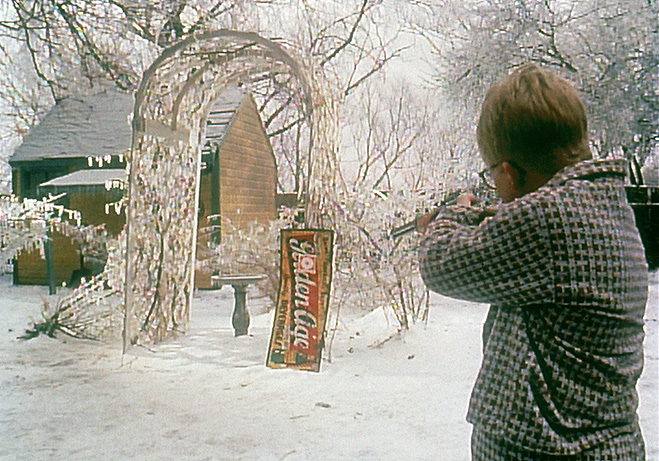 When you are young (or young-at-heart) not even the snow and cold can put a damper your enthusiasm for a new gift. You'll gladly brave the elements in your jammies, as Ralphie did in the 1983 holiday classic, A Christmas Story. 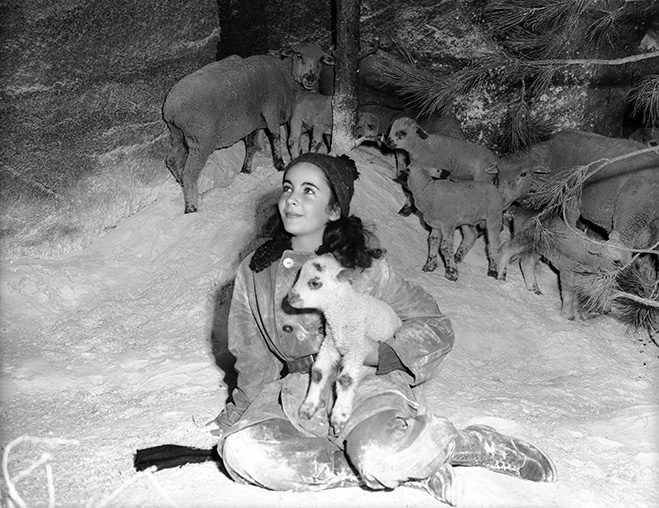 A young Elizabeth Taylor starred with a certain famous Collie in the 1946 family drama Courage of Lassie. Always an animal lover, Elizabeth was photographed visiting a herd of sheep in this behind-the-scenes-photo from the film. 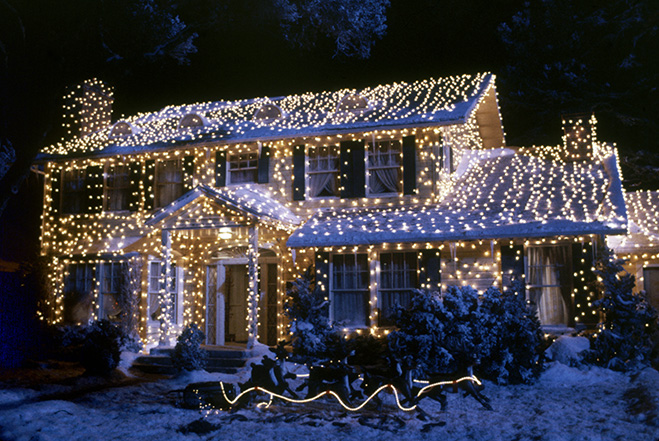 Is there anything prettier this time a year than holiday lights under a blanket of snow? Even the Griswolds did it up right in National Lampoon's Christmas Vacation. 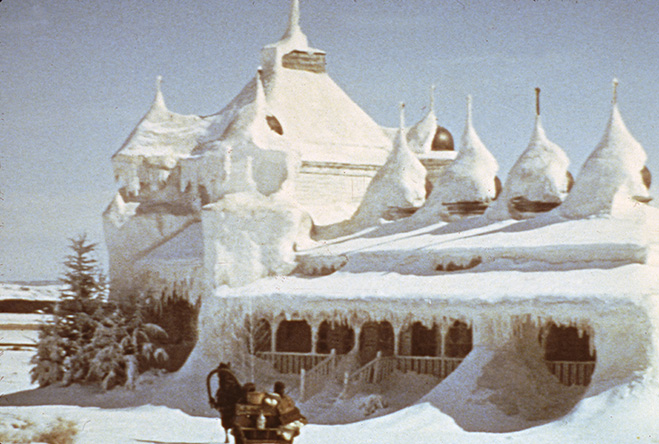 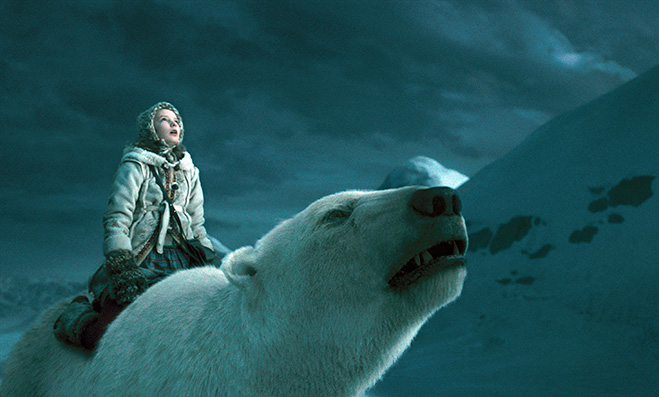 In the alternate world of The Golden Compass, Ice Bears rule the frozen north, with a little help from Lyra (Dakota Blue Richards). 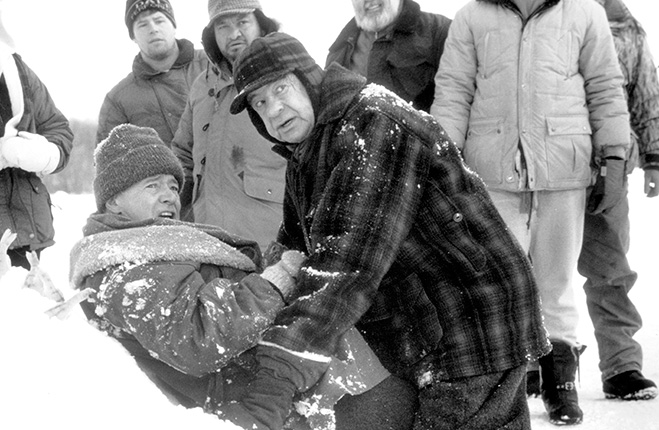 Okay, sometimes the snow and the cold doesn't bring out the best in us—especially when you live next door to a grumpy old man. Jack Lemmon and Walter Matthau duke it out in 1993's Grumpy Old Men. 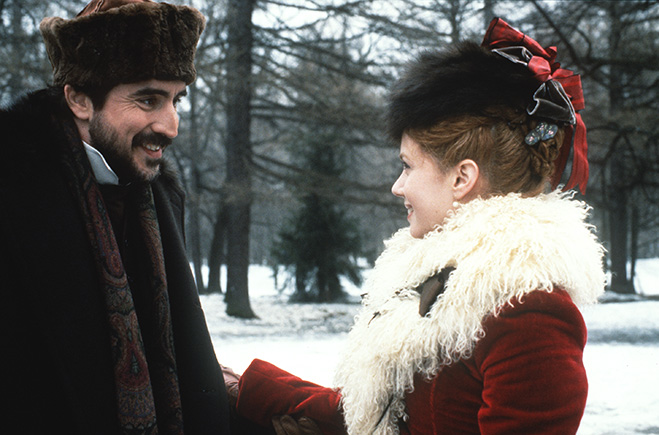 Shot entirely in and around St. Petersburg, Leo Tolstoy's Anna Karenina was able to take advantage of the beauty of the area's natural scenery. 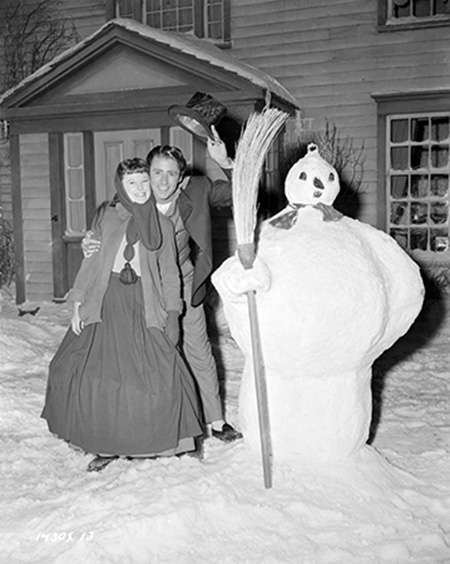 March of the Penguins 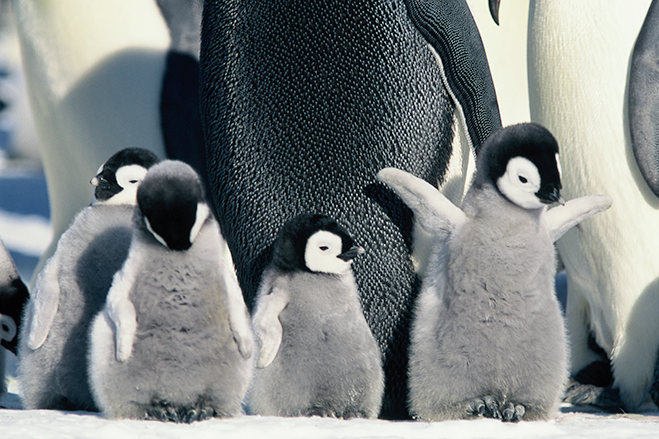 These baby penguins still have their fluffy coats for extra warmth against the harsh conditions they've been born into (and for extra cuteness). The riveting March of the Penguins (2005) won the Oscar for Best Documentary. 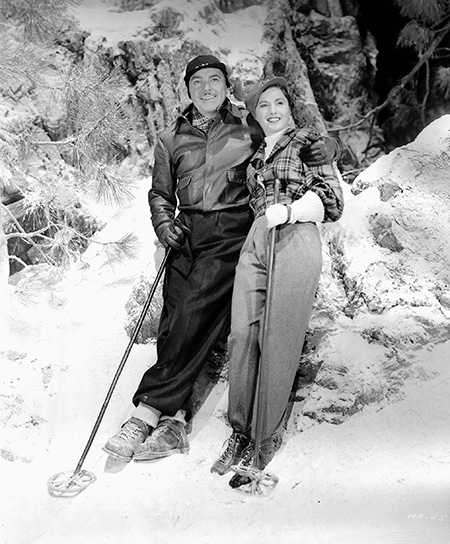 Skiing has never been so stylish as when Barbara Stanwyck and George Brent modeled their winter wear in the 1946 melodrama My Reputation. 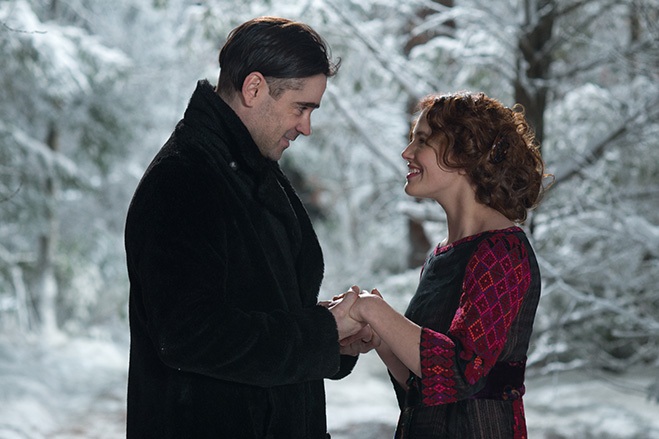 In a romance that spans time, Peter Lake (Colin Farrell) and Beverly Penn (Jessica Brown Findlay) find themselves in the midst of a miracle. 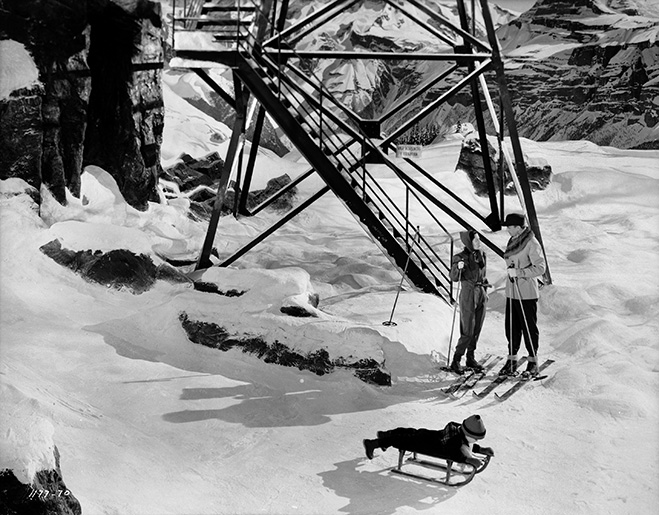 Braving the elements can be rewarding this time of year. Skiiing! Sledding! What's not to love? Joan Crawford as Anna Holm with Richard Nichols as Lars-Erik in A Woman's Face, 1941