You may have noticed that we love combing through our photo archives for rare and never-before-seen images. We've covered the iconic glamour photo portraits from the Golden Age of Hollywood, the launch of the bikini, to the just weird publicity photos that even we couldn't categorize. Today we're delving into the world of beauty and looking at vintage vanities of the stars and behind-the-scenes moments of prepping, primping and those last-second touches before the camera rolls. Film buffs, vintage enthusiasts, antiques collectors and makeup lovers will all find something special in these photos. Enjoy this step back in time as we take a look at behind-the-scenes beauty of Old Hollywood. 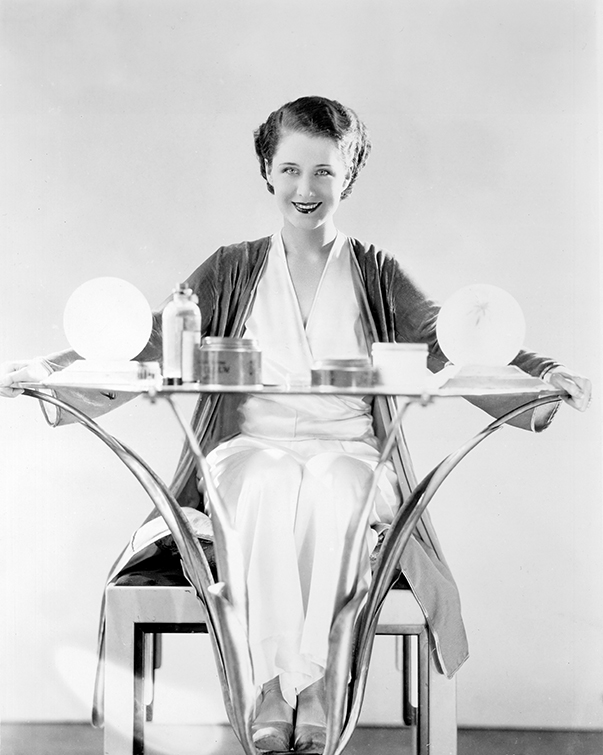 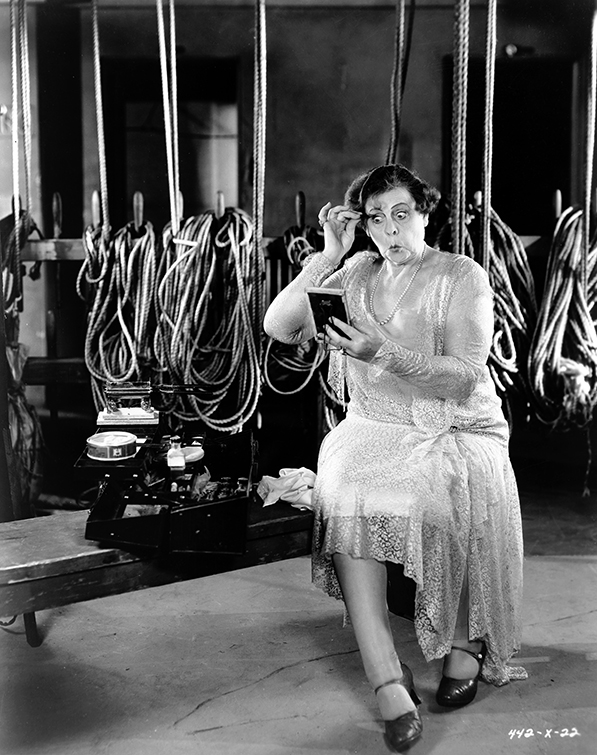 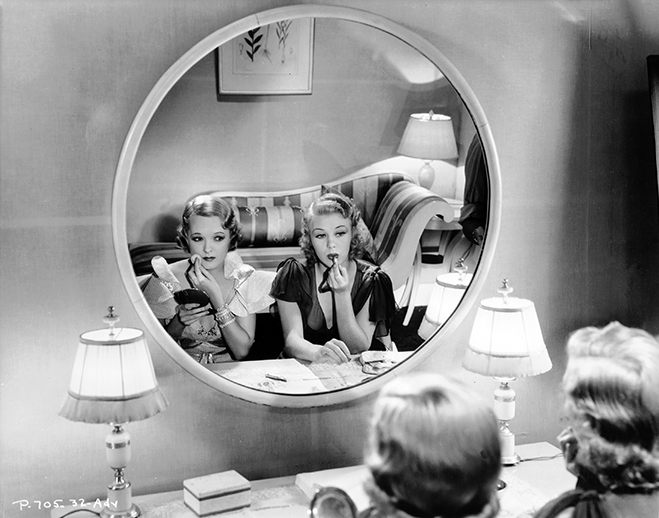 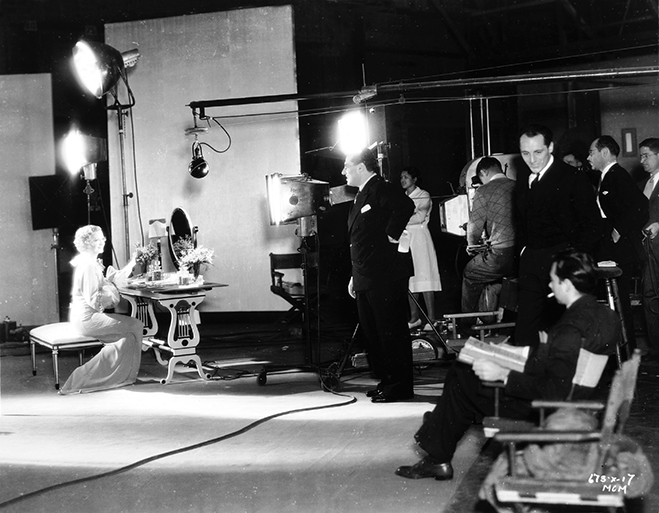 Billie Burke in the role of Millicent Jordan shoots a scene for Dinner at Eight (1934) at a makeup vanity table while the cast and crew, including director George Cukor, look on. 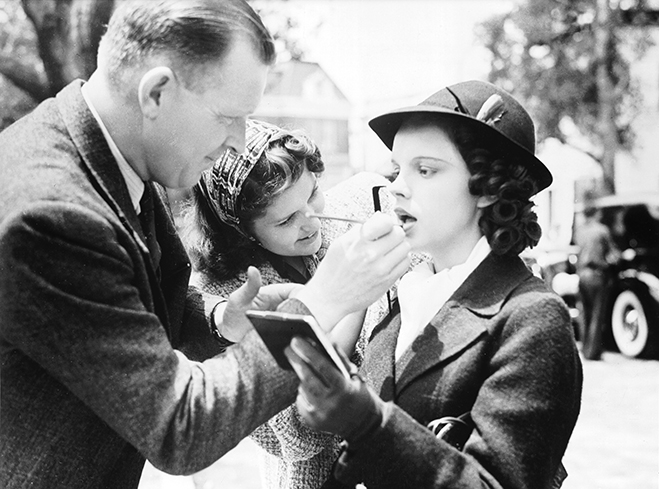 Judy Garland starred as Betsy Booth with her longtime co-star and friend Mickey Rooney in Love Finds Andy Hardy. Garland appeared in a total of three of the Andy Hardy films. 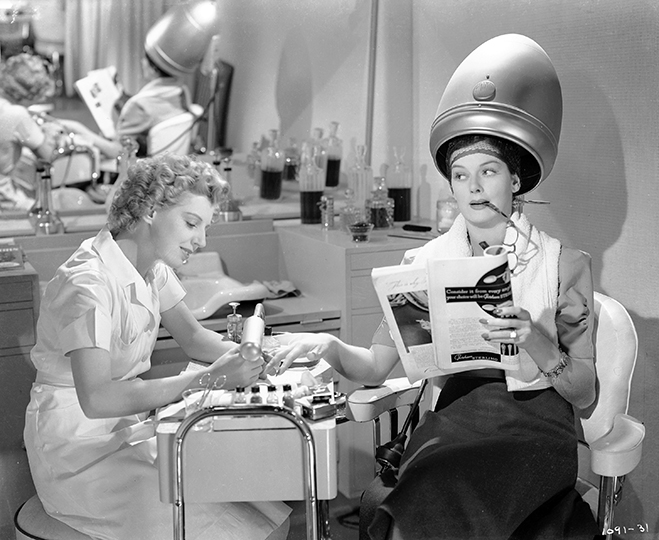 The Women (1939) is a great pick for any vintage beauty aficionado. It was hard to narrow down our favorite still from the film but we love this image of Olga (Dennie Moore) giving a manicure to a multi-tasking Sylvia Fowler (Rosaslind Russell). 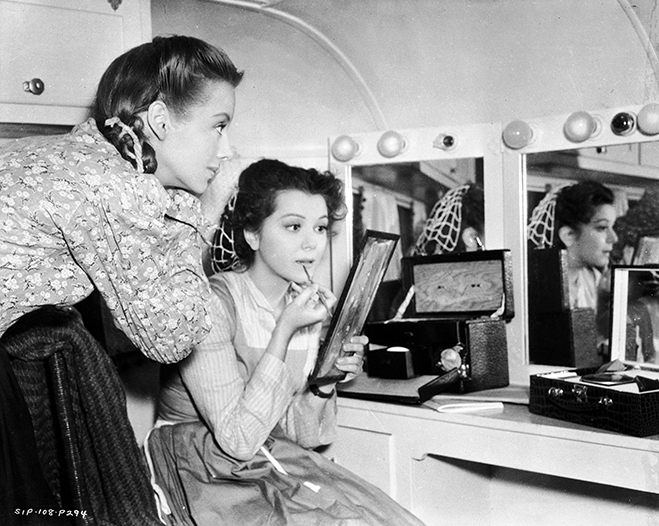 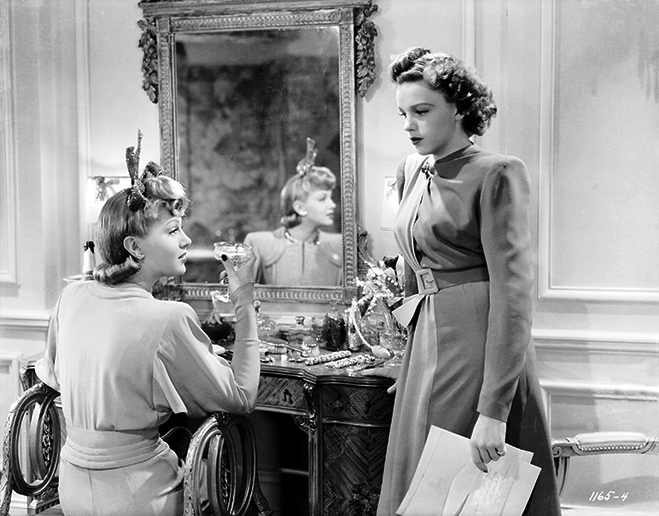 Lana Turner as Sheila Regan and Judy Garland as Susan Gallagher share a moment at an ornately carved vanity during the 1941 film Ziegfeld Girl. 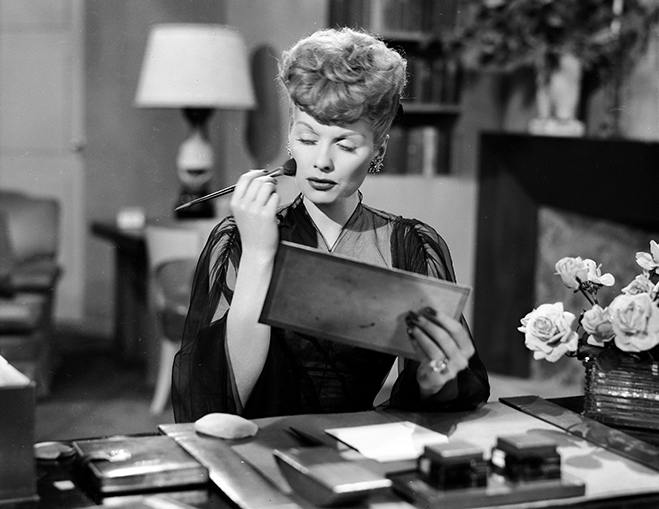 As a former model, Lucille Ball knew a thing or two about doing her makeup. Here she is touching up her face in 1946 on the set of Easy to Wed. 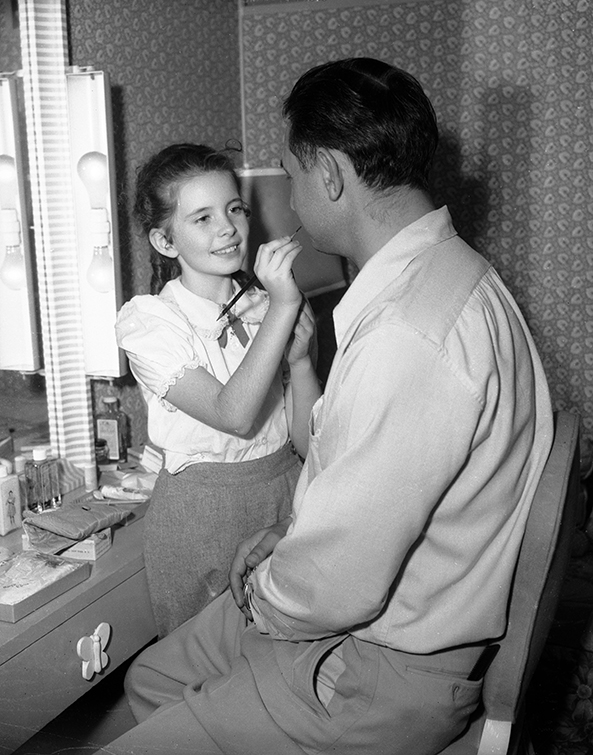 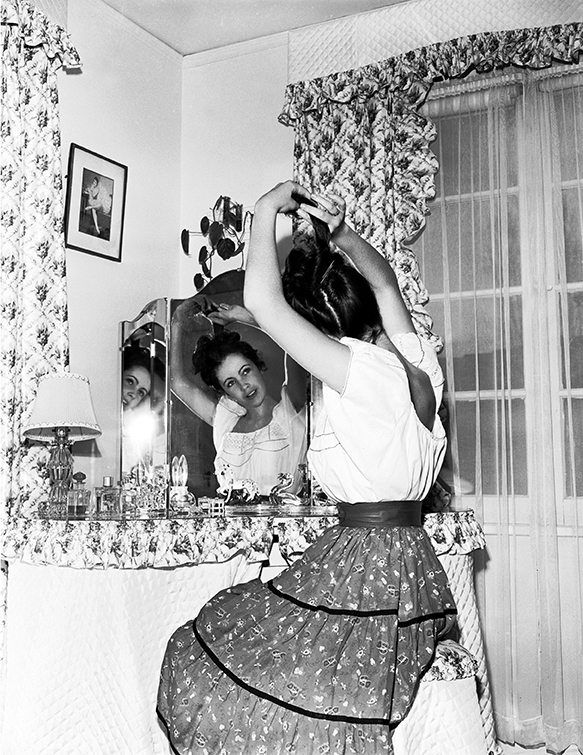 An icon of glamour, Elizabeth Taylor (National Velvet, Cat on a Hot Tin Roof) rolls her hair while seated at her vanity in this charming publicity photo from MGM in 1947. 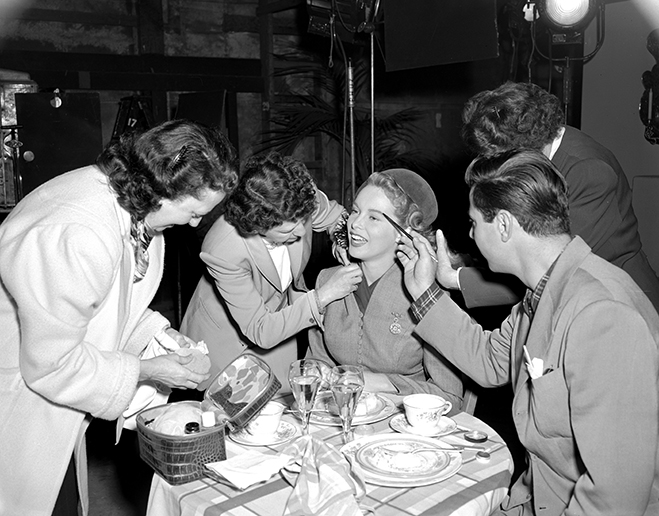 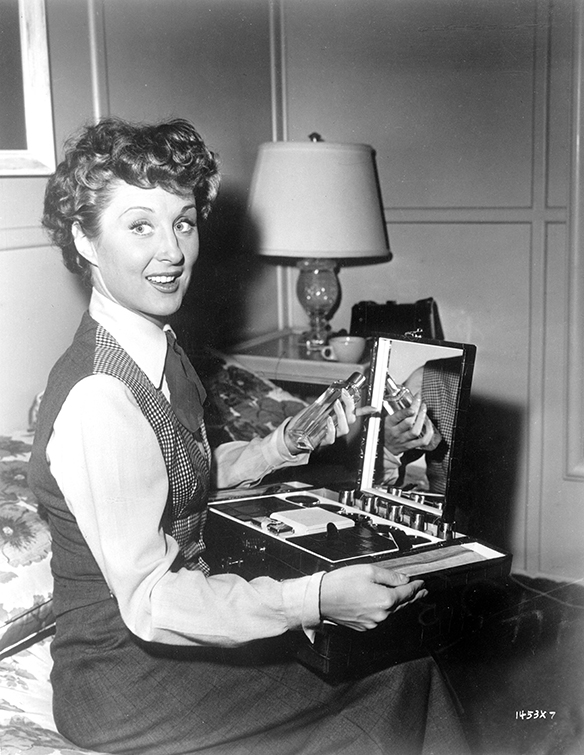 Betty Garrett (On the Town, 1949) shows off a beautiful train case filled with fragrance. 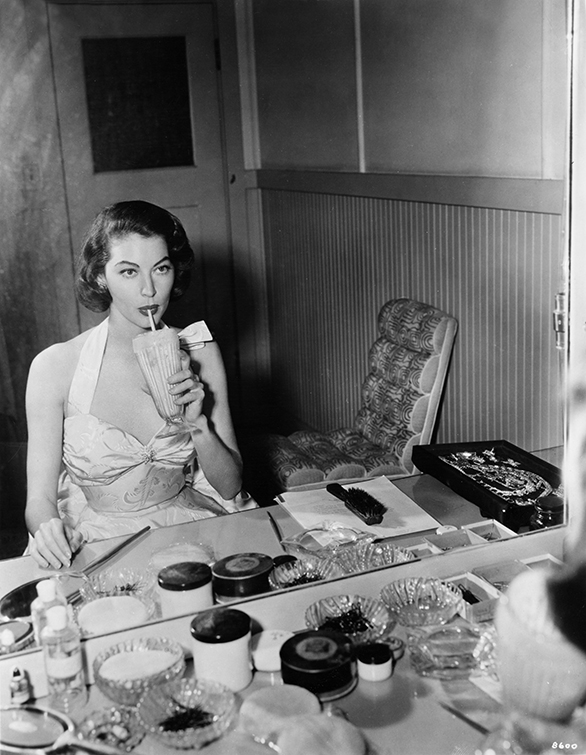 Ava Gardner (The Great Sinner) enjoys a shake while relaxing at her enviable dressing table in this photo from circa 1949. 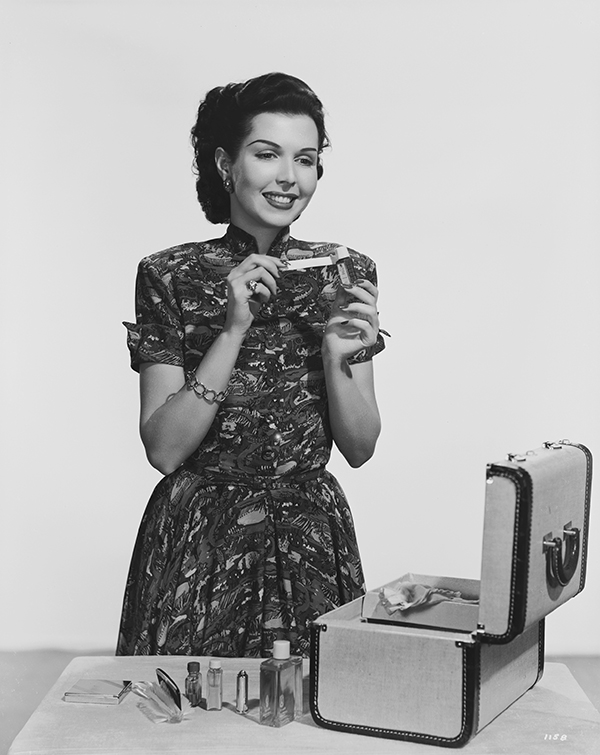 Ann Miller (Hit the Deck) shows off the essentials to packing in this 1952 photo. 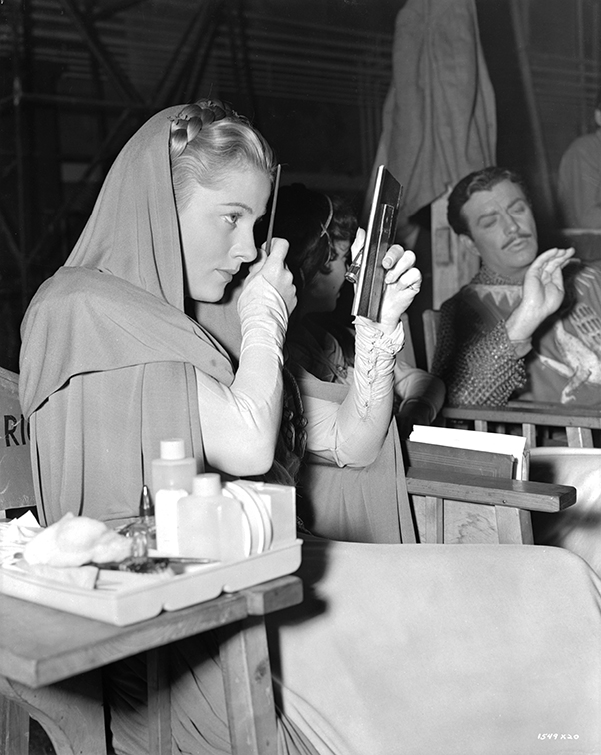 Behind-the-scenes of Ivanhoe (1952) as Joan Fontaine (who played Lady Rowena) checks on her  makeup with a rather unimpressed Robert Taylor in the background. 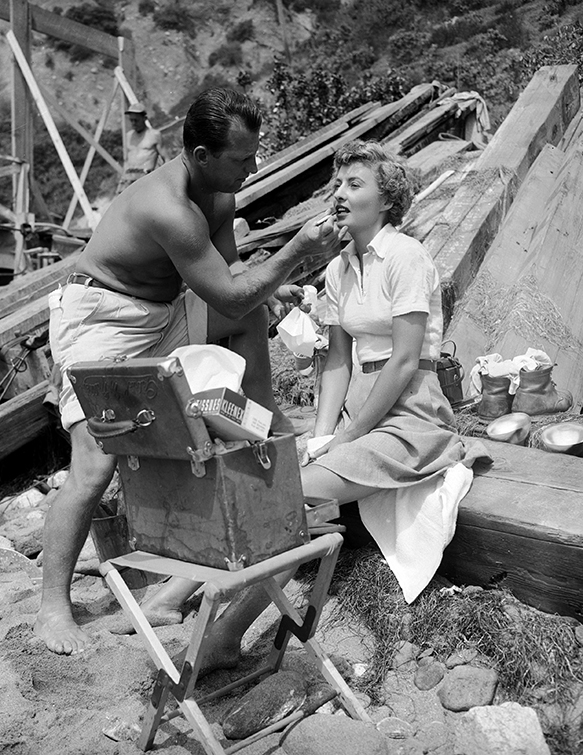 Who needs a private trailer when you can just spread out a towel and have your face done in the great outdoors, as Barbara Stanwyck did on the set of Jeopardy (1953)? 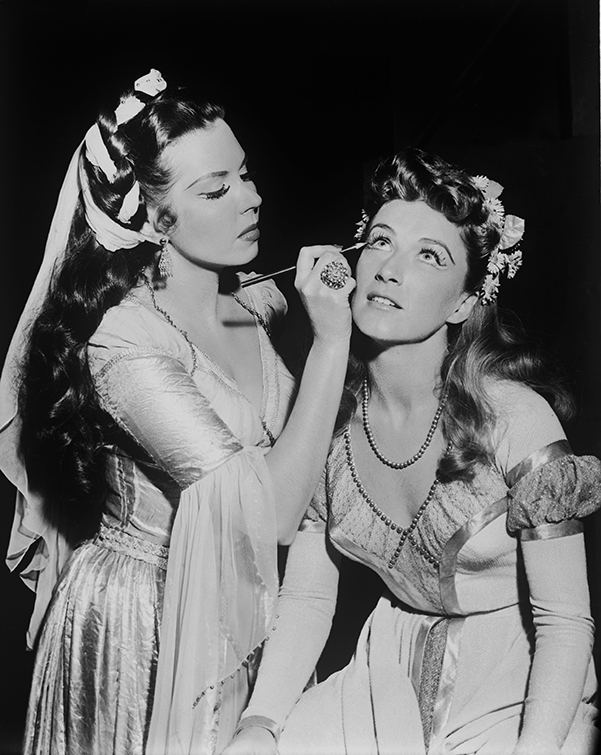 Behind the scenes of the 1953 musical Kiss Me Kate, Ann Miller helps a sister out by touching up Carol Haney's eye makeup. 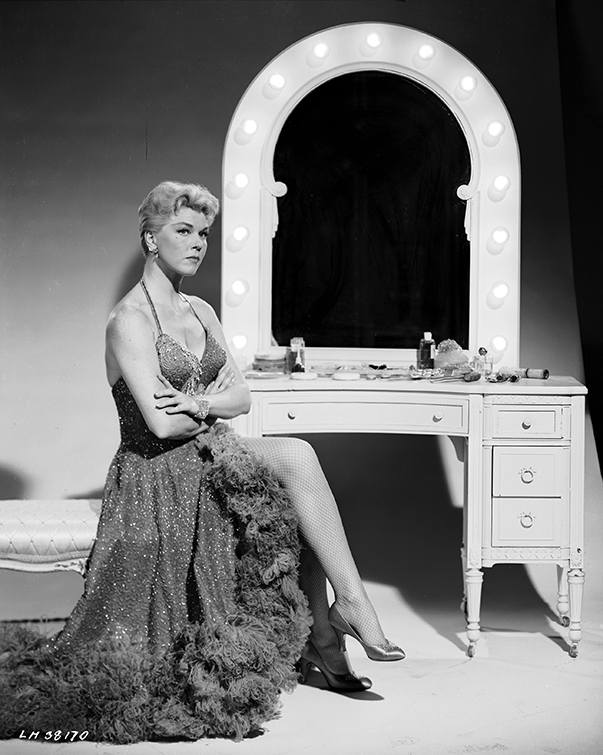 Full publicity shot of Doris Day as jazz performer Ruth Etting from 1957's Love Me or Leave Me. The film won the Oscar for Best Screenplay. 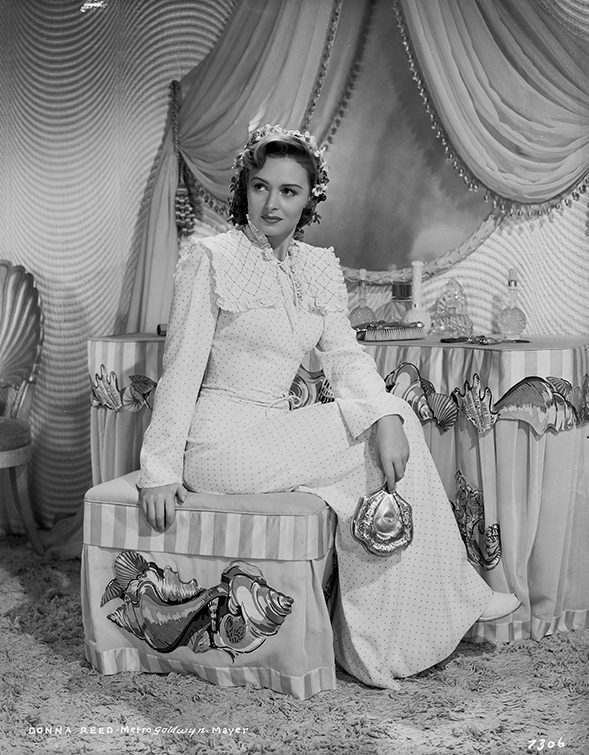 Donna Reed (The Picture of Dorian Gray) is a vision seated in this plush dressing area and wearing an elaborate nightgown. 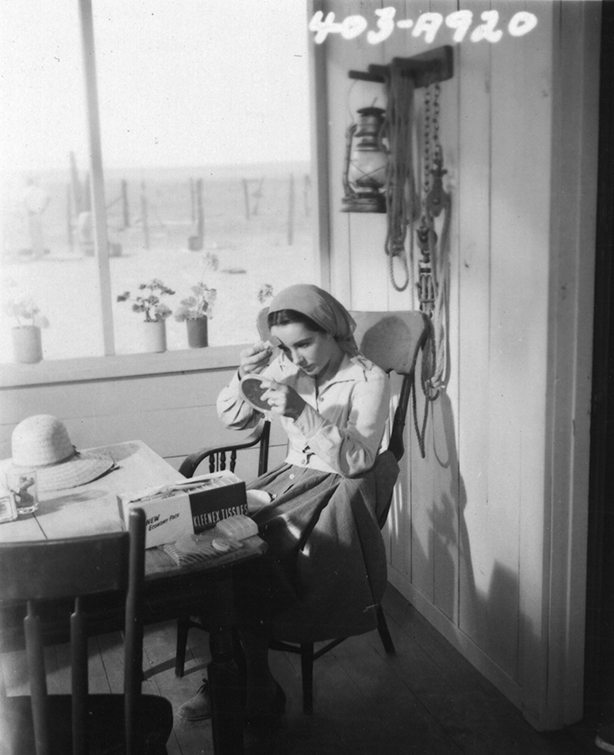 Elizabeth Taylor in the role of Leslie Lynnton Benedict, touches up her makeup on the set of Giant (1956). 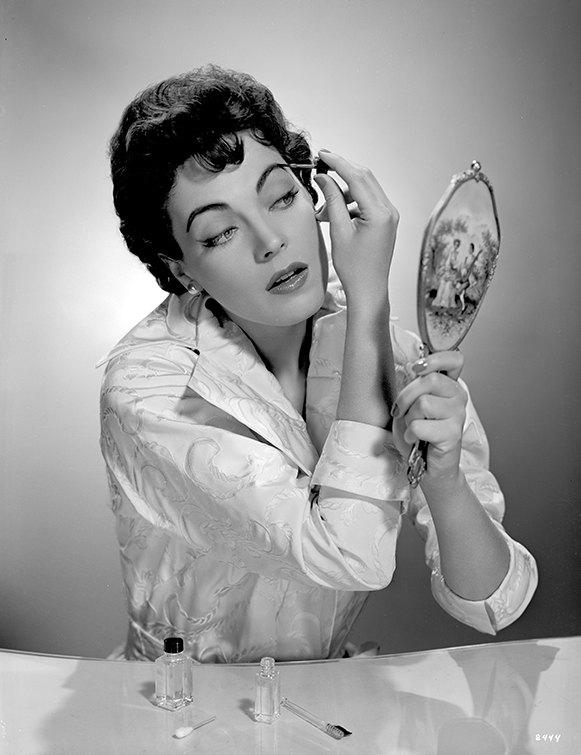 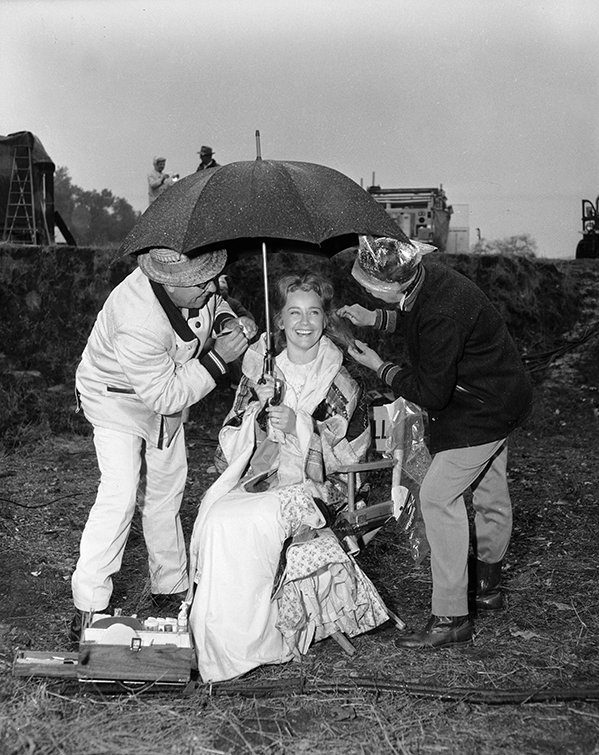 Maria Schell is a good sport as she flashes a big grin while getting her face and hair touched up on the very damp outdoor set of the 1960 remake of Cimarron. Her makeup is being attended to by Frank McCoy and hair by Lorraine Roberson. 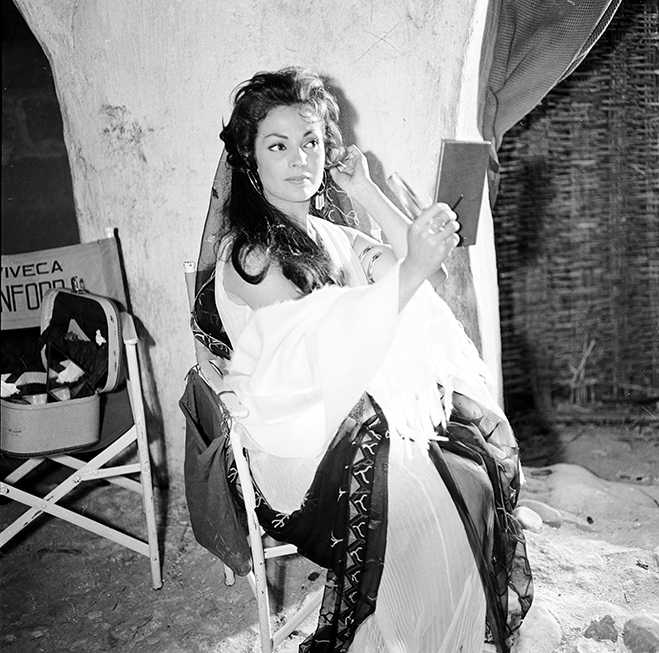 Playing the role of Mary Magdalene, Carmen Sevilla makes a last-minute check of her makeup between scenes on the set of King of Kings (1961). 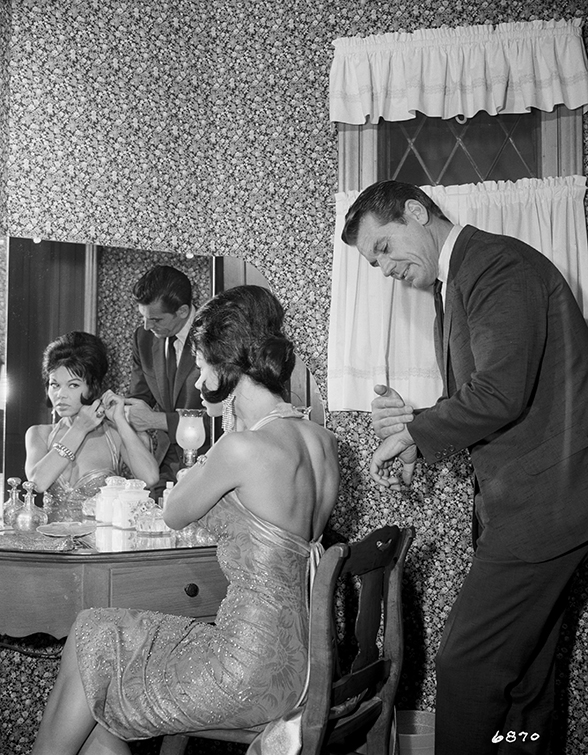 Laya Raki is worth waiting for in this publicity photo with Ron Randell (King of Kings). 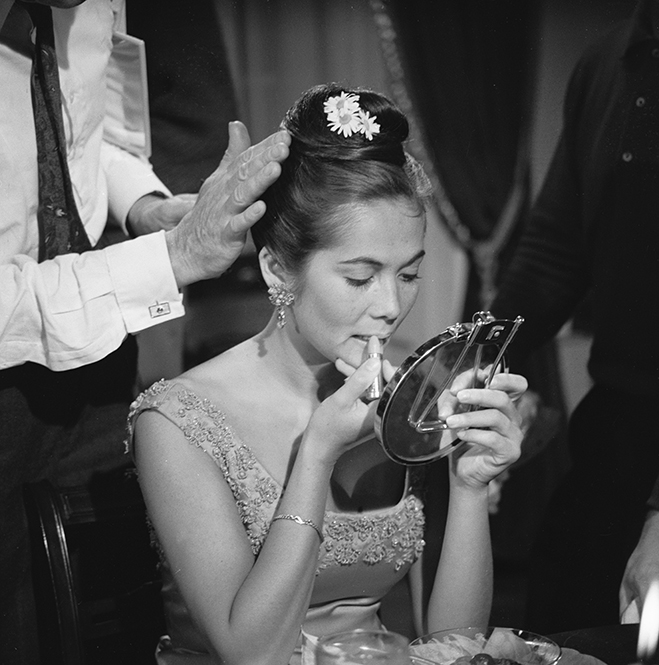 Nancy Kwan freshens up her face during the filming of Tamahine. With flowers in her hair and pale colored lipstick, Kwan embraced the trends of the time. 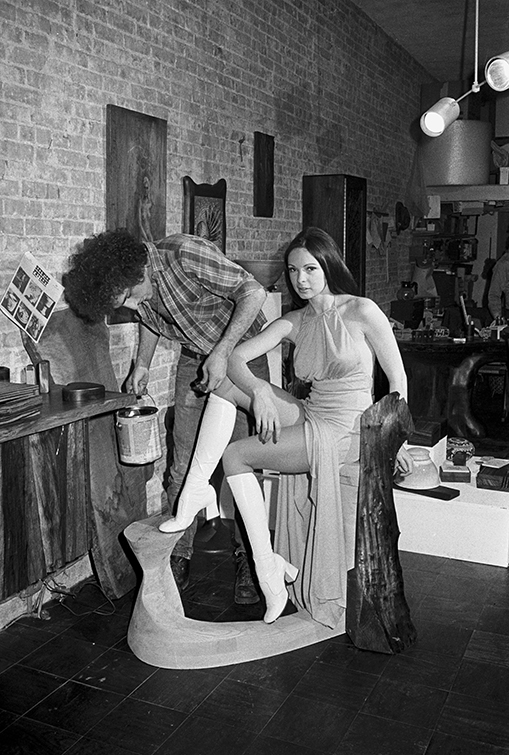 Leigh Taylor-Young has body makeup applied for the film Soylent Green (1973) while sitting in the world's coolest makeup chair.