This Saturday if you feel a chill in the air, a slight tingle up your spine, or the sensation that you're being watched it may be because August 13 is no ordinary day. It's the day that Alfred J. Hitchcock was born. The "Master of Suspense," as he came to be known, was born in London on August 13, 1899, the youngest of three children to a strict Catholic household. Hitchcock famously explored themes of innocence and wickedness in his films, which many attribute to the exacting standards he was expected to abide by as a child.

Gifted with a creative streak, Hitchcock's first job was that of a draftsman and advertising designer. Soon after, he began writing short fiction, often suspenseful thrillers that appeared in The Henley Telegraph in the early 1920s. When the film studio Famous Players-Lasky opened a branch in London, Hitchcock began employment as a title card designer, eventually working as a screenwriter, art director, and assistant director. It was also at Famous Players-Lasky where Hitchcock met Alma Reville, who would not only go on to become one of his most trusted collaborators and creative advisers but also his wife. The pair wed in 1926 and were married until 1980, when Hitchcock passed away at the age of 80 of natural causes. Reville served as writer, script supervisor, editor and assistant director on dozens of Hitchcock's films and is credited as having encouraged her husband to use the infamous stringed instrument composition by Bernard Herrmann during the shower scene of Psycho.

Hitchcock came to Hollywood in 1939, where he would truly revolutionize the world of cinema. His suspenseful films, violent thrillers as much as they were psychological ones, became his calling card, though he did dabble in other genres. In honor of what would be the great filmmaker's 117th birthday, we're featuring seven Hitchcock classics from the Warner Bros. Library. You may want to leave a light on. 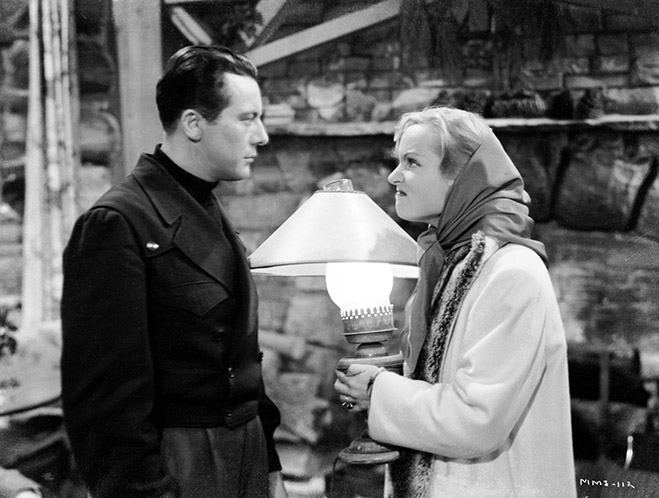 Gene Raymond as Jeff Custer and Carole Lombard as Ann Smith in Mr. and Mrs. Smith. 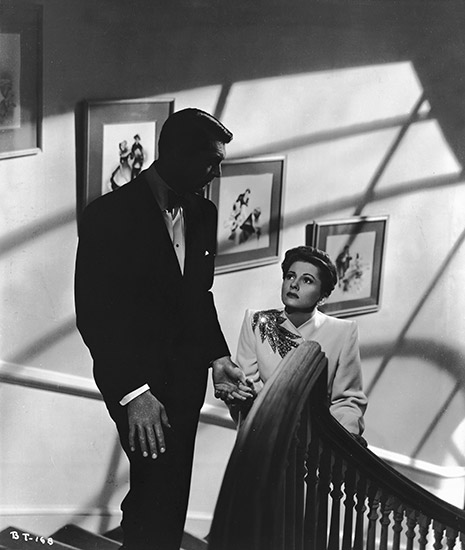 A shadowy Cary Grant with Joan Fontaine, who won the Oscar for Best Actress for her role as Lina McLaidlaw, in Suspicion.

A master of mise-en-scène, Hitchcock wasn't afraid to frame a scene with an actor's back to the camera. 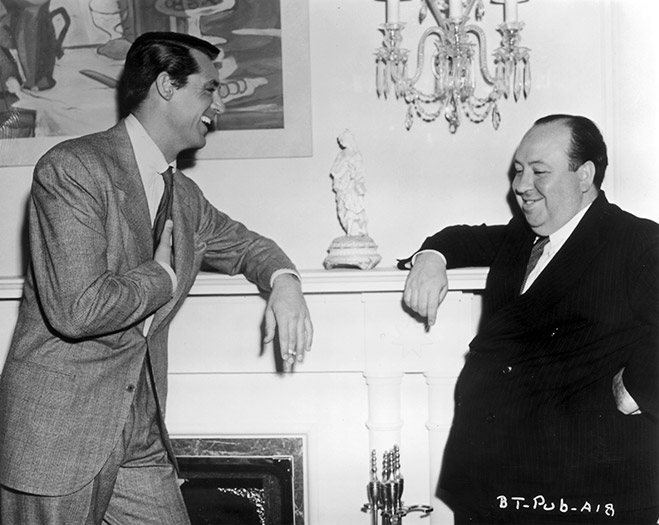 Though his movies were often serious affairs, Hitchcock was a notorious prankster with a keen sense of humor. Here he shares a laugh on the set of Suspicion with Cary Grant. 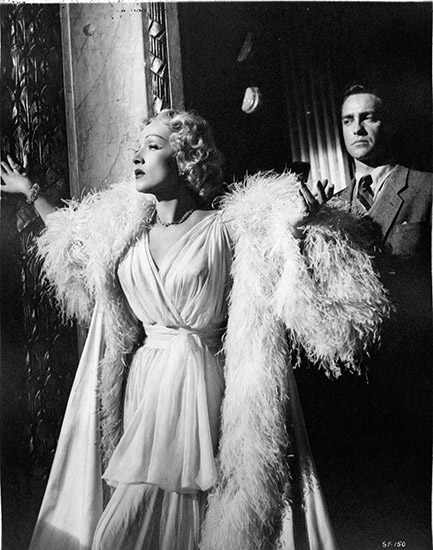 Marlene Dietrich and Richard Todd star in the murder mystery Stage Fright. The film is one of Dietrich's finest and allows her to showcase both her talents as an actress and singer. In fact, Cole Porter wrote the tune, "The Laziest Gal in Town" expressly for her for this picture. 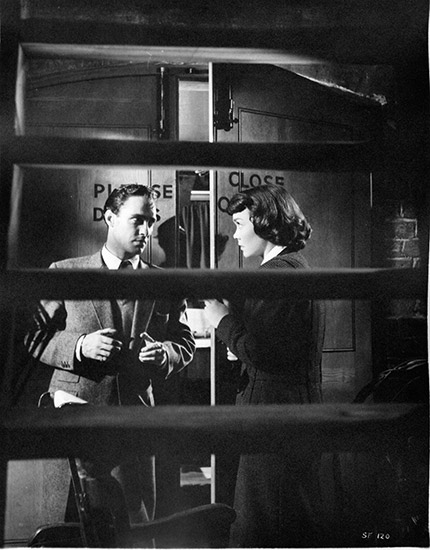 Hitchcock often utilized a sense of voyeurism, like this shot looking through the blinds of a window in Stage Fright.

Strangers on a Train

The dirtiest of deals: I'll kill yours, you kill mine. Hitchcock explores the duality of human nature. The more you watch, the more you'll see in this first-class mystery thriller. 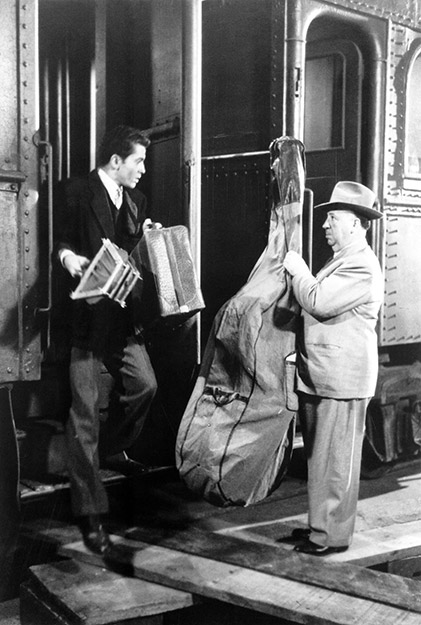 Hitchcock famously placed himself in cameos in dozens of his movies. As they became more popular he needed to appear earlier in the films to prevent audiences from becoming too distracted by looking for the famous director. Here he boards a train as Farley Granger departs in Strangers on a Train.

In this unusual thriller, Montgomery Clift plays a man of the cloth who hears a murderer's confession and winds up implicating himself in the crime due to the sanctity of his Vows and the Confessional. 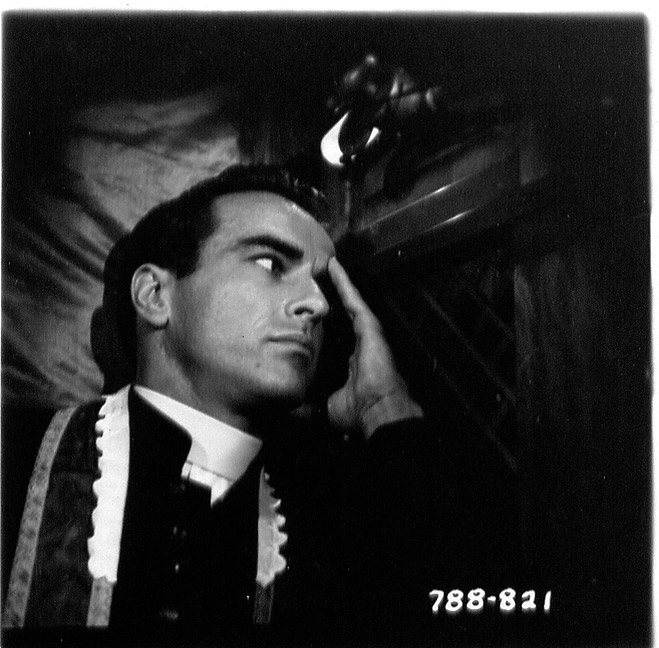 Montgomery Clift struggles with his conscience in I Confess. 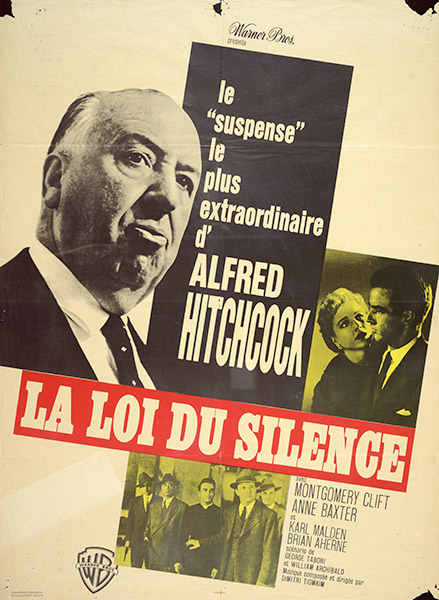 Hitchcock had become so well-known that by 1953 his own image was appearing on poster art, as in this French version I Confess. 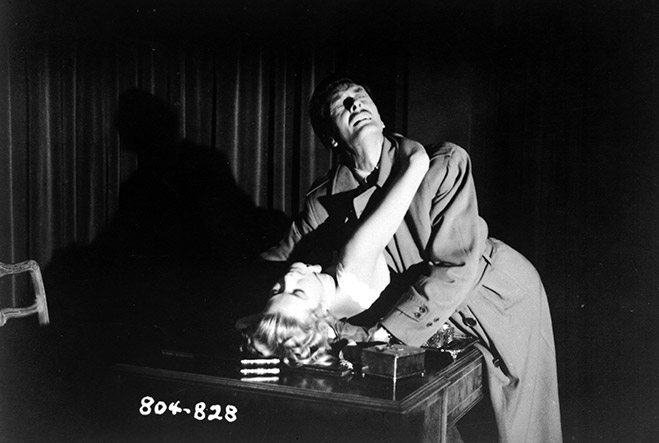 The "icy blonde" became a hallmark throughout Hitchcock's films, such as Grace Kelly (above, with Anthony Dawn in Dial "M" for Murder). As for his leading ladies, Hitchcock once expressed his preference as, "The perfect ‘woman of mystery’ is one who is blonde, subtle and Nordic." 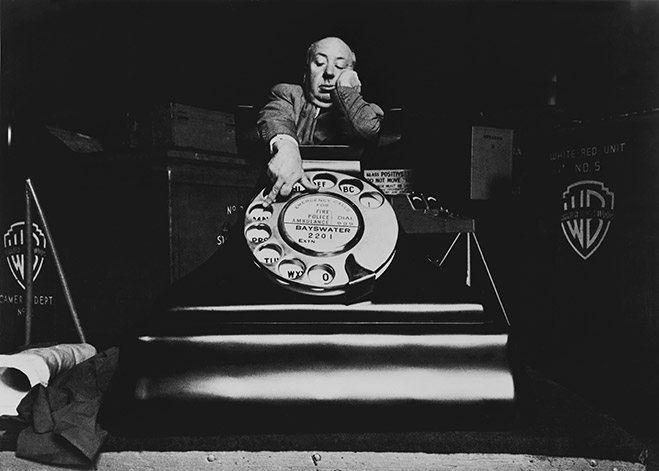 Hitchcock stands idly by with a prop in this behind-the-scenes photo from Dial "M" for Murder.

Part of the American Film Institute's Top 100 American Films, North by Northwest is considered one of Hitchcock's greatest thrillers. Espionage, mistaken identity and a nonstop game of cat-and-mouse, this film leaves audiences breathless. 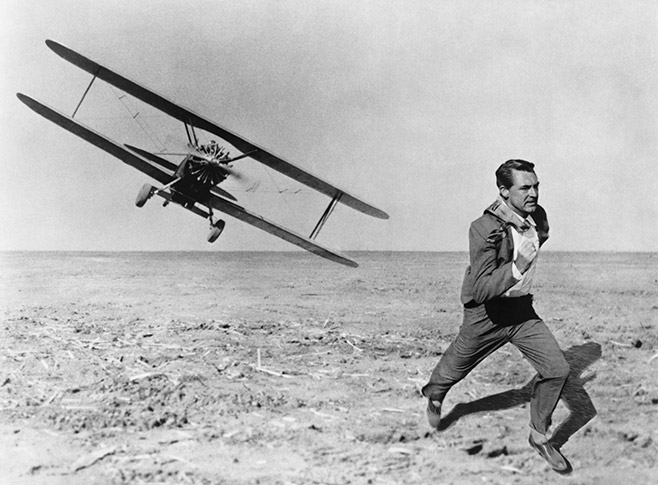 Cary Grant paired up with the venerable director for the fourth and final time in North by Northwest.

After Hitchcock's passing in 1980, Variety noted that despite being an intensely private person, that aside from Charlie Chaplin, was there ever a director so instantly recognizable or had one's name been so tied to a style of film. And it seems that the man himself would have agreed. On his style of movie making Hitchcock once said:

I'm a typed director. If I made Cinderella, the audience would immediately be looking for a body in the coach.