Armed with one of the most impressive casts a director could hope for, Gavin O'Connor's suspense thriller The Accountant opens in theaters this Friday. Starring Oscar winner Ben Affleck, who plays Christian Wolff, a mathematical savant and freelance accountant who handles the books for some of the world's most dangerous criminal organizations, Oscar winner J.K. Simmons as the head of the Treasury Department's criminal enforcement division on his tail and Oscar nominee Anna Kendrick is an accounting clerk for one of Wolff's clients who discovers some book cooking. With a screenplay from Bill Dubuque (The Judge), the acting ensemble in this multi-character study also features Jon Bernthal, Jean Smart and Cynthia Addai-Robinson, with Jeffrey Tambor and two-time Oscar nominee John Lithgow.

Recently, Affleck, Simmons, O'Connor and Addai-Robinson met with the press to discuss all aspects of the film, as well as touching on subjects like Affleck and Simmons working together on the upcoming Justice League film (with Affleck reprising his role as Bruce Wayne/Batman and Simmons appearing as Commissioner Gordon). That superhero extravaganza is slated for release at the end of next year, but right now it's all about The Accountant.

The Snare of the Script

Gavin O’Connor: The puzzle of the script was so freshly conceived that we never touched that part of it. When Ben [Affleck] and I started talking, one of the things we both agreed upon was that in the flashbacks we wanted to make sure that the audience understood how Chris became this person when we meet him as an adult who has all these incredible skills. The flashbacks were always there, but what Ben and I wanted to do is change the flashbacks to dramatize his father and the two boys. This was a dad who loved his child but he was applying his own psychological beliefs in a way to raise him because it could be a really cruel world out there for a kid like him. So he wanted to make sure his child was prepared for that and that’s how he did it. It was always generated by love, but parenting isn’t a sport for perfectionists, so he just did the best he could.

Ben Affleck: It was a very challenging role and it required a lot of research. It was a cobbling together of observed behaviors and character traits from people that we met and that’s what I anchored the performance on. This is a very distinct character in a unique film and that’s what drew me to it. You think you’re getting one kind of movie and then you get something that’s smarter and more challenging and has a resonance about people who are different and what they’re capable of.
It’s about how we try and protect our children from harm and, in some ways, harm them more by doing so. That’s what interested me about the movie. The most heartbreaking thing about the story and definitely moving to me as a parent because I face dilemmas every day—like we all do—about what’s the right way to raise children and there’s a lot of different parenting choices you can make. We all make mistakes for sure, but we all try our best. The fear of a child being vulnerable is very, very powerful and I can see why it made for such an interesting character of the father (played by Robert C. Treveiler) who, out of love and compassion and fear for his son, actually ends up kind of brutalizing him. So it’s a really interesting look at what’s the appropriate way to channel the intense emotion we have as parents. It’s not easy.

Cynthia Addai-Robinson: I just really appreciated the originality of the story and, of course, getting to work with all these incredible people. It just feels like a movie that feels quite different from a lot of what we’re seeing right now. I’m just excited to be a part of it all.

J.K. Simmons: I was very drawn to the script by Bill Dubuque initially. By how smart it was and what an interesting sort of blend of genres it is. It’s action/adventure, a puzzle, a drama. Having seen Gavin’s work…I actually immediately went and got the DVD and re-watched Warrior to remind myself what I had loved about that movie and Gavin’s work as a director. And this guy on my left [Ben Affleck] is pretty good and it was that combo that really made it a no-brainer. 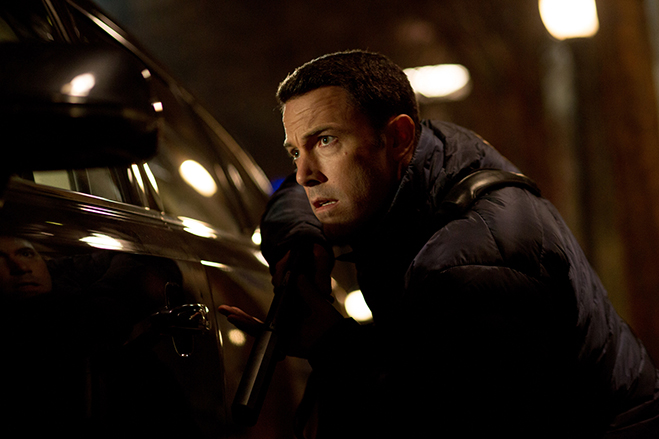 Ben Affleck: [The action segments] were a lot of fun. Gavin really worked hard on figuring out what they were going to be and making them real and bringing in experts. The stunt guys were great, the fight guys were great and I was just thrilled to be a part of it. It was just fun.

Gavin O’Connor: It started with figuring out what [this character's] style of fighting would be and then doing a dissection on the character. It felt like Chris would want to eliminate people as efficiently and quickly as possible, in a mathematic way. So there was a style we discovered called Pencak Silat (often spelled “pentjak silat”), and once we started climbing into the philosophy and style of Pencak Silat it was very cinematic; kind of flashy but very efficient. Once we honed in on that, our guys started training Ben. Ben trained every single day, learning how to fight Pencak Silat. It’s an Indonesian style of fighting.
I was more comfortable with the action part of [the film], like with the journey into Chris’s mind in the scene where he deconstructs the books. I was terrified of that scene, as Ben can attest. We may have over-thought it, but I wanted to make sure we got it right because it was a journey into his mind. I kind of approached it like an action scene. It was a visualization of his super-brain.

Ben Affleck: Movies are always about the director, I’ve learned that…finally [laughs]. So when you work with a director, you’re on his or her ship and your job is to be creative and bring forth your ideas to fulfill this person’s vision of how they’re telling the whole story. You have a silo that you’re responsible for in your performance and, to me, it’s about getting as tuned in to the director as possible and try to follow through with their vision and help make their movie. It’s very satisfying to feel like you’re on the same page with someone like Gavin whose really interested and engaged and thought-provoking as the process is going on. The nice thing about acting is that if a set falls down, you can just go back to your trailer. “I’ll be back when you figure it out” [laughs]. So many things are not my problem, it’s very, very nice.

J.K. Simmons: This movie was a real treat to contribute to on every level. I completely echo what Ben said about what your function is as an actor. My function is this film was to serve the story and to fit into the story we’re telling about the main character and to be part of the puzzle because with so many of the characters in this movie there are things that surprise you about them. All the major characters in the movie are multi-faceted and have a lot going on and there are things that are revealed as we go that are really interesting and smart and fun.

Ben Affleck: It’s also really cool that when you do a part in a movie, you don’t know what the other actors are doing when it’s kind of compartmentalized like this story is, so it’s a real treat to sit down and watch the movie for the first time and go, “Oh, that’s what they were doing. I should have really brought my ‘A’ Game, they’re pretty good.” It’s like seeing the special effects being put into a movie, ya know, where you’re out there with a Green Screen and a tennis ball and you watch the movie and there’s an asteroid careening towards earth. It was similar in seeing how great these other actors’ storylines were in the movie and how much it carries the film, and how tight and how sharp the acting is. I was just psyched to be in a movie with them.

Batman as The Accountant?

Ben Affleck: Same chin [laughs]...If you stretch hard enough you can draw parallels between a lot of different characters. It was great to work with J.K. again (editor's note: they both recently worked together on the upcoming Justice League film) and I wish we had the chance to do more and hopefully we will in the future. I’m not much of a tactician when it comes to what a career should look like. I’m not a big believer in that sort of strategic 36,000-feet planning. It’s more about finding projects that interest me and move me, and part of that is variation. You would get bored doing the same thing over and over again, and I’m lucky I’ve had a chance to do these three movies—Batman v Superman, this one, which is completely different, and Live By Night which is completely different—which keeps me active and engaged and hopefully doing my best work.