Available now for your mobile phone on iOS and Android: Fantastic Beasts: Cases from the Wizarding World.

Master your magical skills as you delve into your Wizarding World to investigate unexplained happenings. In a new adventure inspired by J.K. Rowling’s Wizarding World, enjoy all-new experiences as you discover hidden objects, interview witnesses, analyze evidence, and cast spells to uncover and protect the fantastic beasts at the center of every mysterious case. 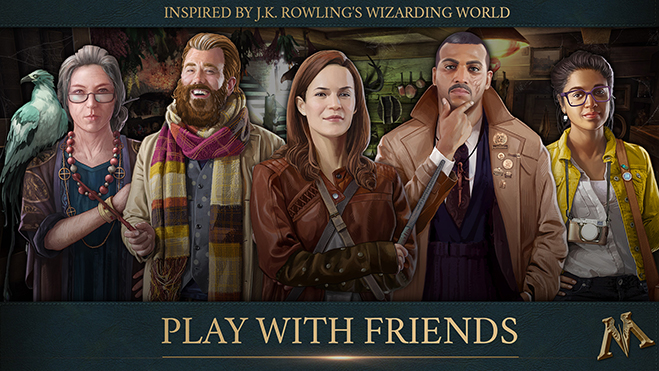 Just announced! Beginning December 9, the public will have the unique opportunity to get an up-close look at authentic props and costumes when the Warner Bros. Studio Tour Hollywood launches an exhibit around Fantastic Beasts and Where to Find Them. Highlights of the Fantastic Beasts experience will include costumes worn by the central characters of the film such as Newt, Tina, Queenie, Jacob and Percival. Newt's magical case, which houses beasts of all sizes, will also be on display.

Danny Kahn, Executive Director of Warner Bros. Studio Tour Hollywood, had this to say of the latest addition to the Studio Tour:

We are excited to let the world peer behind the lens to see how filmmakers develop the entertainment we love. This expansion will transport guests from Harry Potter’s Hogwarts adventures back to 1926 New York, where Newt Scamander’s misplaced magical case has found its home.

Not only will Newt Scamander's 1926 New York be on display, but all of J.K. Rowling's Wizarding World. Tour guests will be able to explore how Rowling's deep and immersive world-building has been brought to life on the silver screen over the past 15 years. The expansion will take guests on a journey from concept art to final designs used on set. Guests will be able to see the detailed costumes of Lord Voldemort, from a young Tom Riddle to his rise as the Dark Lord and have the opportunity to be sorted into one of the four Hogwarts houses by the magical Sorting Hat. This interactive experience will take place in front of a life like image of the Great Hall which will include costumes of iconic Hogwarts professors. As a finale to the exhibit, tour guests will be able to explore the newest film from the Wizarding World, Fantastic Beasts and Where to Find Them.

Finally in the homestretch! After years of anticipation (can you believe the idea for this movie was announced in 2013?) fans will finally get to feast their eyes on the Wizarding World of New York as Fantastic Beasts and Where to Find Them debuts globally on November 18. The stars of the film gathered this past Thursday on the black carpet for the New York City premiere. If you missed all the goings-on by watching in real-time on Snapchat (username: wizarding_world) here are a few highlights:

The intoxicating @AlisonSudol arrives to show us her Queenie magic on the black carpet tonight. #FantasticBeasts #premiere pic.twitter.com/loCx6ie2HM

Say hello to our very own #EzraMiller who we know as Credence as he walks the premiere carpet. #FantasticBeasts pic.twitter.com/NGkbAZArlm

Last but by no means least, Pickett the bowtruckle got to come to the premiere, courtesy of a very talented fan! pic.twitter.com/6ILUufS0IS

WaterTower Music is now allowing fans to preview the entire original film soundtrack to Fantastic Beasts and Where to Find Them on YouTube! James Newton Howard, the Grammy and Emmy Award-winning composer who wrote the music for the film, said of the writing process:

The scope of the movie, emotionally, visually, in every way, is very broad. There are funny moments, magical, beautiful moments, and there are some dark and scary moments. The music helps tell the story. I've had fun writing themes for the various characters and giving a musical voice to this wonderful new movie. It's been a great collaboration with musicians and filmmakers, and I've thoroughly enjoyed it!'

You can hear it all at right here. The soundtrack will be released on November 18.

Wanting to get a closer look at the extraordinary no-stone-left-unturned detail that went into the making of Fantastic Beasts and Where to Find Them? Dozens of new photos from the film were released today that give fans a chance to pore over every nuance before the movie's November 18 premiere. From small details such as the interesting collar clip on Percival Graves (played by Colin Farrell) to Beasts large and small, there is something fun and noteworthy to notice in every photo. Here is just a small sampling of today's photo release. You can find them all in greater detail, including posters and trailers, on our Fantastic Beasts title page.

Alison Sudol is radiant as Queenie.

Even the smallest Beasts are cataloged by Newt Scamander (played by Eddie Redmayne). Here he and Jacob (Dan Fogler) find a Bowtruckle.

In this behind-the-scenes photo, Redmayne, Katherine Waterston, who plays Tina Goldstein, confer with director David Yates on the set of the film.

It's smiles all around when screenwriter/producer and the creator of the Wizarding World herself, J.K. Rowling, poses for a photo on the set with Waterston, Fogler, Sudol and Redmayne.

Arrive at the November 18 premiere of Fantastic Beasts and Where to Find Them in style, thanks to an upcoming fashion collection based on the film to be released at Hot Topic on November 8. Looks in the nine-piece collection include Newt Scamander's finely tailored, close-cut blue duster coat, a Queenie Goldstein flapper dress, and Seraphina Picquery's off-the-shoulder dress with deco-inspired details. Fans of design and cosplayers alike are sure to appreciate interesting details such as sewn-in "wand pockets" lining the inner shell of the coats. Prices will range from approximately $29–$99. 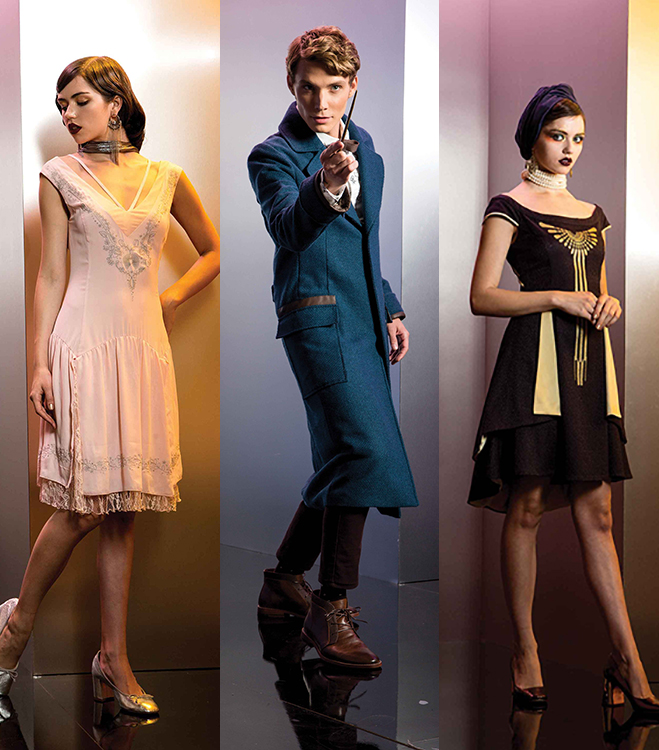 Eddie Redmayne himself has admitted being keen on Scamander's sartorial choices. In an interview with Pottermore.com he had this to say about the already-famous blue coat:

It’s interesting, my costume, because one of the main routes into this character is the way he moves. With the tightness at the top of that coat, Newt’s a compact kind of guy, especially when you think about all the vials and magic he can fit in that coat. The trousers are slightly too short for him too, which works for the way I move as him. And it’s the 1920s. I love the whole look of that era.

The entire collection will include:

As the countdown to November 18 inches ever closer, we're finding more fun stuff from the Wizarding World! A new IMAX poster has been released featuring a wand-wielding Newt with his gang of Wizards and No-Majs behind him.

More magic and new fantastic adventures. We’ve conjured up the @IMAX poster for #FantasticBeasts - In theaters this November! pic.twitter.com/5WxACbhNGx

Here's how our #FantasticBeasts video cover works. Even Muggles and No-Majs should be able to figure it out. pic.twitter.com/mImG7nWb5g

Hoping to get a closer look at the Fwoopers and Nifflers swooping to and fro in the upcoming cinematic spectacular Fantastic Beasts and Where to Find Them? On Friday Empire Magazine revealed its special subscriber-edition cover featuring one Mr. Newt Scamander with a very, very, VERY large Fantastic Beast that has escaped into the wilds of New York City—in this case, a Thunderbird—flying over his shoulder. Today Empire has followed up with a peek at its general December newsstand issue featuring Newt, Jacob, Queenie, Tina and Percival. Look for it on sale beginning this Thursday.

Newt Scamander and company are the stars of our #FantasticBeasts newsstand cover, available in all good and evil newsagents this Thursday. #EddieRedmayne #ColinFarrell #EmpireMagazine

Empire is also planning to release an extremely limited-edition moving video cover in the style of the The Daily Prophet, so keep your eyes peeled!

Update: A fantastic announcement from J.K. Rowling herself closed out today's Global Fan Event. Rowling has confirmed that there will be a total of five Fantastic Beasts films! Watch a replay of the event below.

.@jk_rowling has just confirmed the magic continues in a total of FIVE MOVIES! We can't wait! #FantasticBeasts

It's an exciting day for Fantastic Beasts and Where to Find Them fans all over the globe! Debuting in theaters all over the world, as well as streaming live, a global celebration of the film's magic, "A Return to J.K. Rowling's Wizarding World: Fantastic Beasts and Where to Find Them" will begin today at 8:30 p.m. GMT (3:30 p.m. EDT, 12:30 p.m. PDT). Talent from the film will be joining a live Q&A from London and Los Angeles. Eddie Redmayne, Katherine Waterston, Alison Sudol, Dan Fogler, director David Yates and producer David Heyman will be in attendance from London. Colin Farrell and Jon Voight will be live at the Los Angeles event. No-Majs and Muggles will get a sneak peek at what's to come as we get a deeper look into the Wizarding World of 1920's New York. Attendees will first be treated to a never-before-seen reel featuring some of the thrilling moments from the much-anticipated film. (Please note this event is not a screening of the film.)

But there's always more going on in the Wizarding World. Advance tickets are now on sale for the November 18 premiere.

Tickets are now available! Get your #FBTickets today and experience the magic of #FantasticBeasts in theaters this November. #IWantToBeAWizard Tickets.FantasticBeasts.com

Be one of the first to get your tickets for the big day! Invite your friends to a screening party using the new Fantastic Beasts emojis that debuted on Twitter this week. #FBNewt, #FBTina, #FBQueenie and #FBJacob were all immortalized in emoji form on Tuesday. Be on the lookout for more Fantastic emojis to rollout soon! Follow the @FantasticBeasts Twitter account to see them all. 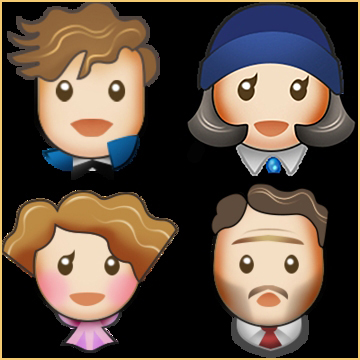 Nine magical character posters also debuted this week.Entertainment Weekly shared the gorgeous artwork on Monday of both Wizards and No-Majs alike. With beautiful and subtle details, the images give more insight into the background and motivation of the characters that we'll get to know come November 18. Visit Entertainment Weekly to see all nine close-ups of Newt, Queenie, Seraphina, Porpentina, Mary Lou, Jacob, Percival, Gnarlak and Credence.

Remember to visit our blog often as we update with more details as November 18 draws closer. And, as always, #IWantToBeAWizard!