Just in time for the holiday season, Oscar nominee Will Smith stars in director David Frankel’s Collateral Beauty, a touching tale of one man’s struggle with a tragic loss that begins a strange chain of events that brings him face-to-face with Love, Time and Death on a path to discover a new beauty in life that only sorrow can reveal. The amazing all-star cast also includes Oscar nominees Edward Norton and Keira Knightley, Michael Pena, Naomie Harris, Jacob Latimore and Oscar winners Kate Winslet and Helen Mirren.

Recently Smith, Norton, Mirren, Harris and Latimore, along with Frankel, writer/producer Allan Loeb and producers Michael Sugar and Anthony Bregman gathered before the media to discuss the magic and mystery of this special film.

Seeds of the Story

Allan Loeb (writer/producer): Eight or nine years ago I had this idea, but I didn’t write it until a year-and-a-half, two years ago. The first concept was people writing letters to these abstractions, eventually I landed on Time, Love and Death, and then I kind of built it out from there over a period of years. I just started with the idea of someone writing letters [to Time, Love and Death] and it just kind of came together from there. I had no idea what it was for years, it was just a story that kind of haunted me and stayed with me until I finally pounded it out in 2014.

Michael Sugar (producer): I would like to say that there are a lot of similarities [between Collateral Beauty and the Academy Award winning “Best Picture” Spotlight, which Sugar also produced], although they are very different films obviously. What attracted me to this story is similar to what attracted me to Spotlight, which is that Spotlight was a group of people giving a voice to a group of people that didn’t have one, and I think thematically that is a big [theme] in this movie. Each of the characters has something to say that they weren’t able to say and the Howard character [played by Will Smith] in particular wasn’t able to speak for quite a long time. So, for me, that is something that I find very human. We all have something to say and we’re all looking for someone to hear us. For me that was the connective tissue, and I’m really just as proud of this film as I was of that one.

Will Smith: When I first read the screenplay, it spoke to that Christmas flavor that I remember growing up with. It’s a Wonderful Life and those types of films that are right on the edge of fantasy with that Christmas magic, but are dealing with things that are deeply and powerfully real and human. I loved that this was a guy who had the world on a string—everything was perfect. He had life figured out and then suffered a loss and had to make his way back to even believing that there was the possibility of having joy again.

Anthony Bregman (producer): The story isn’t really a Christmas story exactly, but the holiday period is a time of both loneliness and magic which really figured into the movie. It really is a time where people kind of take stock of family and take stock of what’s important to them, and that really figured into it. Besides thematically, I think the holiday season presented [director] David Frankel a way to talk beautifully and visually about the magic in our lives. The beauty of the film is really in the lighting of the film and these little points of light that come from the decorations and there’s this elevated sense, visually, of what life can be which really matches what’s going on in the movie.

David Frankel (director): I think Christmas in New York is just a special time and I think it represents a magical world for people who live in every city around the globe, so it was just a terrific opportunity to set the movie here. I don’t think it could have happened anywhere else. I think there’s something really special about this city at Christmas that’s hard to describe and I think you get a window into it when Howard’s riding across the bridges or when Whit [Edward Norton] and Clarie [Kate Winslet] are standing in front of the Bergdorf windows. There are just these iconic images that we associate with magic.

Edward Norton: When I watched the film it struck me that New York’s chaos and density helps you believe that these things can be taking place. There needs to be a lot of distraction. It’s almost like a magic trick. New York has such a tumble to it that it lets you buy in to the idea that something like this could be going on.

Will Smith: During the time working on the film, my father was diagnosed with cancer and given six weeks [he passed way in November], so the idea of that loss and that type of pain in this movie and these ideas have changed me forever. It’s the ultimate human difficulty: how do you deal with death and loss? It was the perfect art/life confluence for me. I hope that people can feel the depth and power of what’s going on in the film.
For example, in my mind, I had decided that Howard had moved to Buddhism and there’s a thing that the Buddhist monks do—the Mandalas—where for fourteen hours a day they do these beautiful sand mandalas. They slave all day [creating them], then they stand up and they look at it for 60 seconds and then wipe it away. They create this beautiful piece of art and they destroy it for the practice of impermanence. That’s sort of the idea I was working on with the dominoes [in the movie], where Howard creates these beautiful domino mazes, tips them and turns and doesn’t even watch them fall, as the practice of impermanence and letting things go. I am forever changed by Collateral Beauty.

Naomie Harris: Only when you come to terms with death can you really enjoy the fragility and the beauty of life, so I was interested in going on a journey that would explore that. Will’s wardrobe assistant Mei Lai [Hippisley Coxe] was able to share her story of losing her little child with us and it was so traumatic to hear about the suffering that she had been through, but it was also incredible to see that she had found collateral beauty in that and how it had changed her life, and, in some respects, for the better she said. She saw the beauty of life in such a more profound way. That’s what I took away from it.

Will Smith: I loved that journey and Howard thinks about life a lot of the same ways I think about life. How he had to move from thinking that he could solve all of the issues of life with his mind into accepting that there’s a certain amount of bleeding that you have to do to be able to purge and cleanse yourself to be able to experience joy; that the pain and joy and growth are all inexorably bound.

Naomie Harris: I think the tragedy cracks you open in such a way that it is incredibly, unbelievably painful but it also means that life enters in a new, profound and beautiful way that is healing and uplifting and life-affirming. I can only try and portray that, but I think that’s what’s so magical about who Madeleine is. She has experienced that and she’s come out the other side and finds joy in staying connected with other human beings, and staying connected with their pain and suffering and trying to alleviate that in some way. That’s an amazing way to live.

Will Smith: Well, if Death dressed like Helen Mirren I’d be cool with that [laughs].

Jacob Latimore: I think I just related to the concept of Time. I think Raffi’s whole purpose is to get Howard to realize the importance of Time and what are we doing with our time right now. I related to that the most: what am I doing with my time right now? How am I learning more? And what we do on this bridge of Time is so important. 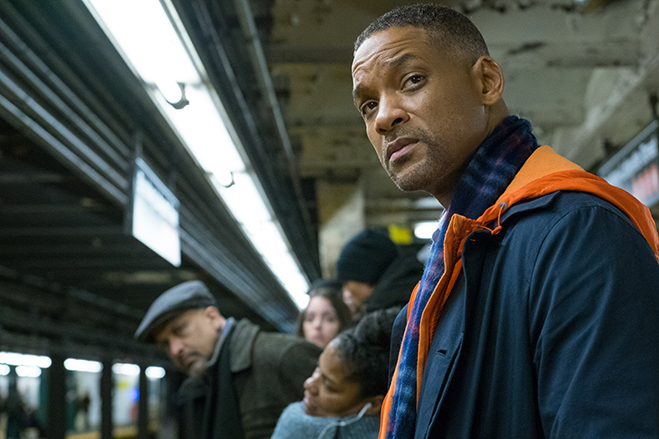 There’s a wonderful quote from Khalil Gibran that I love. He said, 'Our pain is the knife that hollows us out so that we may hold more joy.' I thought that is a really interesting idea that you suffer that pain and you are torn open for the purpose of being able to hold more light and joy and positivity. And I think that is the collateral beauty of the type of suffering that Howard experienced in this film.