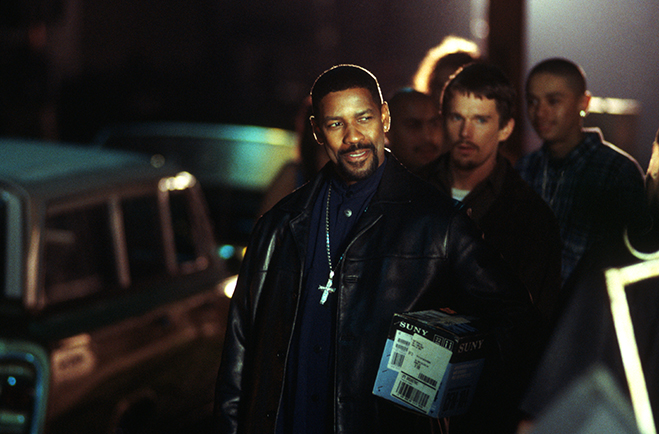 In the fall of 2001, Americans struggled to understand the new reality of life in a post-9/11 world. Global politics and life itself were forever changed as traveling took on a heightened sense of uneasiness, if not outright fear, and a blanket of mourning set in as we all adapted to these new and unsettling realities. More than ever, firefighters and cops were the new untouchable superheroes.

And along comes Training Day.

Released on October 5, 2001 (the studio actually pushed the date back by two weeks in the wake of the September 11 terror attacks), Training Day takes a hard look at dirty cops who do good. Set (and shot) on the streets of Los Angeles, the film follows Denzel Washington as veteran narcotics officer Alonzo Harris as he trains rookie Jake Hoyt, played by Ethan Hawke in the narcotics division. Sounds straight-forward enough but Harris is a complicated character who understands you sometimes need to work outside the boundaries of the law in pursuit of justice as he takes Hoyt through a training day that includes a shoot-out, smoking PCP, and a beatdown of two rapists.

Playing against type, Washington won the Best Actor Oscar for his portrayal of the unscrupulous officer. See his memorable acceptance speech here:

Washington has stated he knew right away that he wanted to play the role of Detective Harris. Director of the film, Antoine Fuqua, described the character as:

...a bit of a gangster, but he’s charming, he’s sexy, and he’s intelligent and he’s mean and he’s tough. He’s the guy that we all wish we could be. It’s like meeting the devil for the first time.

Still a memorable film more than fifteen years after its release, Training Day has now been reimagined into a television series starring Bill Paxton and Justin Cornwell. Produced by Warner Bros. Television, Jerry Bruckheimer Television and Fuqua Films, the first episode will premiere tonight at 10/9c on CBS.