This past October, HBO launched the dramatic series, Westworld. An odyssey that takes viewers into a world where every human appetite, whatever the desire—be it noble or depraved—can be indulged. But our Westworld of today (well, really tomorrow since it’s set somewhere in the near future) wouldn’t be possible without the Westworld of yesterday; specifically, Michael Crichton’s 1973 experimental sci-fi look into the future of filmmaking: the original Westworld.

The film was written and directed by the late Michael Crichton, perhaps best-known as the best-selling author of Jurassic Park. But 20 years earlier when Westworld was released in 1973, Crichton had already written the enormously successful 1969 novel The Andromeda Strain, which had also been made into a film. Dr. Crichton received his M.D. from Harvard Medical School and wrote 25 novels between 1966–2006, 13 of which were made into films. He was also the  creator of the long-running series ER, which enjoyed 15 seasons on primetime television.

Westworld is just one area of an expansive "playground." The robot-driven theme park called Delos is made up three worlds: Westworld, Medieval World and Roman World. Because the budget for Westworld was so mind-bendingly small, Crichton was okay with being a little fuzzy on some of the more technologically-accurate details. In his director's notes to his production team he wrote: “I hesitate to state this so bluntly, but this movie is fantasy and in the end I don’t really care if the equipment surrounding each table is “appropriate” or not, so long as the total effect is impressive and organized in some way. There is a fine line between a thrown-together look, and an organized look.”

Though the 1973 version may look dated now, the film used some of the most advanced technology available at the time. Over the course of four months and processing only seconds of film per day, John Whitney Jr. was able to digitally process motion picture film from the the Gunslinger/android’s (Yul Brynner) point of view. Westworld was the first film to ever use computer digitized images as part of a feature film.

Reception was overall positive, and the film has a solid 86 rating on Rotten Tomatoes. Variety called the film “excellent” and “superbly intelligent.”  Westwood was MGM’s top-earning movie of the year in 1973.

Westworld is the first movie to use the term “computer virus.” The phrase is used by the park supervisor as an explanation as to why the robots are spreading malfunction errors to each other.

Visit our Westworld title page to see more photos, video and information. Judge for yourself if you would take the vacation of a lifetime to Westworld!

Still can't get enough Westworld? The original 1973 soundtrack is now available through WaterTower Music. Composed, conducted and arranged by Fred Karlin you'll think you're really wandering the streets of Delos. 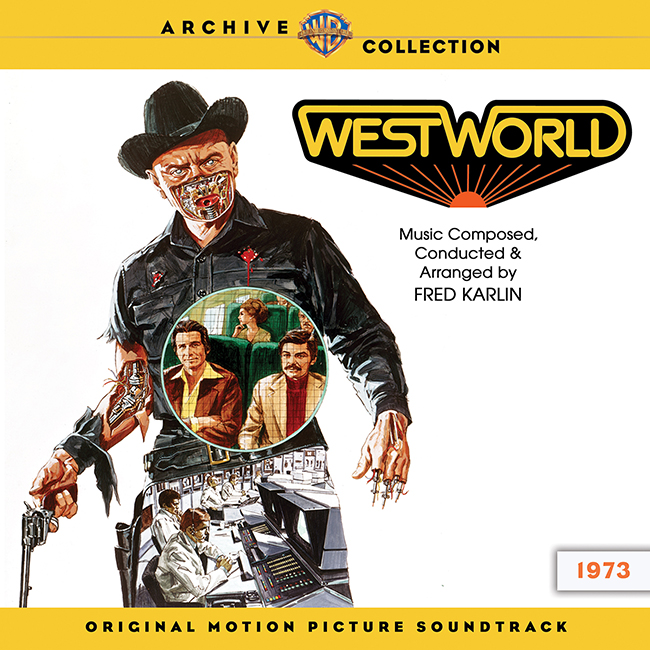