IT'S ON, THIS FRIDAY!

That's right, two high school teachers are squaring off old school in the latest New Line comedy, Fist Fight. Directed by Richie Keen and starring Ice Cube and Charlie Day as the faculty combatants, Fist Fight also features Jillian Bell, Christina Hendricks, JoAnna Garcia Swisher, and the return to the screen of Tracy Morgan after his near-fatal accident a few years ago. Keen and his cast recently got together to go a few rounds with the press and below are some highlights, but first get your bearings and watch the trailer.

The Return of Tracy Morgan 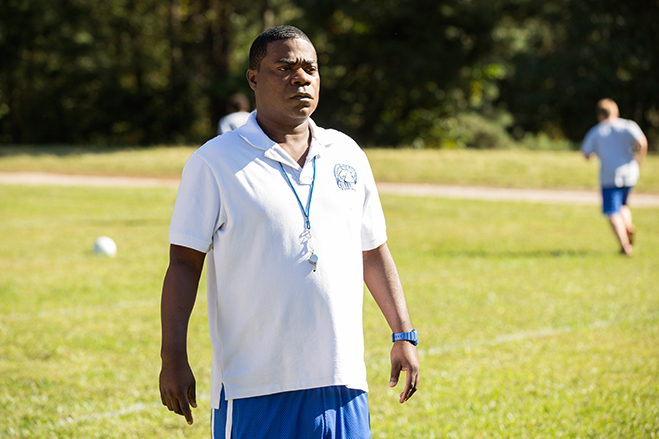 Tracy Morgan: I was on the couch for a year after that Wal-Mart truck hit me, so I just let it all out and this was the movie to do it at. I was so scared the first day because I didn’t know if I’d be funny or not after what I’d just been through, but I had a team around. I mean [Ice] Cube is like a brother to me, so they really encouraged me and relaxed me and I just had fun after that.
I broke down and let it out [shooting my first scene]. I didn’t know if I was ever gonna be back. I didn’t know if I was ever gonna walk again, so to come in and do my first film with Cube and [Charlie] Day and all of us here. I love you all, man. It feels good and we got a winner here. This movie is a cross between Welcome Back Kotter and Law & Order [laughs].

Richie Keen: I just want to say this really quickly. The people at New Line said to me that I’m the first director in the history of their studio who got every first choice in their cast. Every single person in this cast was my first choice, there was no second choice. Look at this group. I wanted to get the funniest people on the planet together with the people you didn’t know were the funniest people on the planet. It’s an amazing group of people.

Ice Cube: Any time you work with people who are this funny, you have your moments where you break and Jillian would come with a new line every time so she’s gonna hit you with something that you’re not ready for. I think that’s her comedic genius. And Charlie is so perfect and seamless from acting to comedy to dramatics; he just has this sensibility about him that’s funny. And Tracy is gonna say something inappropriate every time, so you break every now and then.

Jillian Bell: [Richie getting on his knee] was the nicest and most unnecessary thing that anyone has ever done for me. I was like, “I love this script, I love you, I love who’s in the movie,” and I was so happy that he wanted me to be in it. And him getting on his knees was a big bonus [laughs]. That’s never happened to me and probably will never happen again.

Christina Hendricks: It was very fun to join this group. I had been a fan of everyone for so long and I just got to come and do this bizarre, twisted little role that was super fun for me. I got to flip a blade, which Cube helped me with a little bit [laughs]. I practiced over and over; I had bruised fingers [laughs]. It was just fun for me to come in and act bizarre and learn from these guys.

JoAnna Garcia Swisher: [Playing the only grounded character in the movie] is ironic because I’m completely inappropriate in my life. I was so nervous when I came to meet Richie and Charlie. I had to pretend like I was giving birth in my audition and that was super embarrassing, but they spoiled me rotten; everyone did. And to get to work with Tracy was a wonderful experience; just the gratitude and positivity that flows out of him. And Jillian is just so sweet and wildly intelligent and incredibly funny. I just got to sit back and wear big boobs that I don’t really have and wear a big belly.

Ice Cube: I remember those kinds of teachers in school. The ones who would yoke you up by the collar and I’m playing that guy. The kind of teacher that takes the air out of the room. My motivation was shaping these bad-ass kids into shape and sometimes you need a bat.

Ice Cube: I think that with a movie like this, it’s hard to have a message and not have it ring corny or untrue. So it was cool with Fist Fight where teachers are fighting each other with an undercurrent of the reason why. It’s over philosophies in education, different styles, and that fight is probably going on in schools to this day.

Charlie Day: It was good to have two different philosophies for both teachers. The line about “everybody gets a trophy these days.” I think there’s some truth to that, but at the same time we can’t just go swinging axes at kids. There’s a happy medium somewhere [laughs]. Look, we’re not teaching crazy life lessons, but hopefully there’s enough in there for people to get some kind of point of view from the movie.

Ice Cube: In talking to Richie and Charlie, we wanted to have an underlying message talking about the school system and how two teachers deal with it. One teacher is ultra-hard and one teacher is trying to appease and get along and befriend the students, so it is saying a lot about our school system and the problems that we face nowadays. But the overlying message is to have fun, laugh, trip off these crazy characters and this crazy scenario; it’s really all about the fun in it. If you’re trying to find a really deep-rooted message in it, well, ummm...[laughs].

Charlie Day: There was a stuntman who did one take [with the horse dragging him through the hallways] and I think he broke a rib. I said to [director] Richie, “There’s no way you’re tying me to a horse.” I think, legally, they can’t do that [laughs]. But the stunt guy really took one for the team.

Richie Keen: I knew that we had to deliver on the promise of the movie title and I defy you to find a stunt double [in that scene]. These guys fought each other for eight days. I was blown away.

Charlie Day: I’m not gonna lie. We shot that scene over a year ago and my leg still hurts [laughs]. I don’t think I’ll ever be the same. I was not prepared to do this [laughs]. There was one take where I went into that school bus pretty hard and I was like, “Alright, we gotta stop for a minute.” I was seeing four Richies. It was eight straight days of fighting all day long.

Ice Cube: It’s choreographed, it’s not ad-libbed like a real fight. Rule Number One: Learn the choreography of the fight so you don’t hit nobody and then try to make it look right. At this point, I’ve been in more movie fights than real fights [laughs].

Charlie Day: I did actually have a week of training because they had to show me how to make a fist [laughs]. I trained with a guy named Yves Edwards, who was a big UFC [Ultimate Fighting Championship] guy and, at one point, we’re doing the moves and he says, “Now you duck,” and he accidentally hit the side of my head and almost completely knocked me out [laughs]. I got a lot more respect for those UFC guys and how tough they are. I would never ever wanna do it, and I don’t recommend it.

Charlie Day: [Alexa] blew me away. There’s a funny moment where I go backstage and she’s supposed to be sad, and she sort of delivered it straight. And Richie and I kind of pulled her aside and said, “You know, it would be really good if you were almost crying,” and she says, “Okay, give me five.” And then she comes back with her eyes full of tears [laughs]. She’s a really, really talented kid and, of course, she can sing and dance—and rap apparently. I think we’ll see a lot more of her. She was really great.

From Stand-Up to Directing

Richie Keen: Being a comic helps you with timing and it helped me in the editing room more than anything else. I have to say though that when you have Ice Cube and Charlie and Tracy and Jillian and this entire cast, sometimes when a pitcher is throwing a no-hitter the best thing to do is not go out to the mound. With these guys, I never gave them direction I just pitched them ideas because if you’re smart you surround yourself with people who are better than you. Directing a cast like this was effortless. It was the highlight of my life. 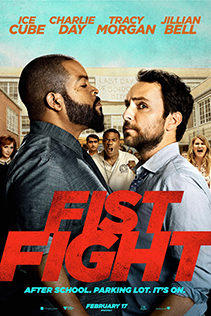