We're now just one day away from the Kong world domination! (P.S. Did you buy your tickets yet?) While you're counting down the hours why not kick back with a curated Kong: Skull Island Spotify playlist? 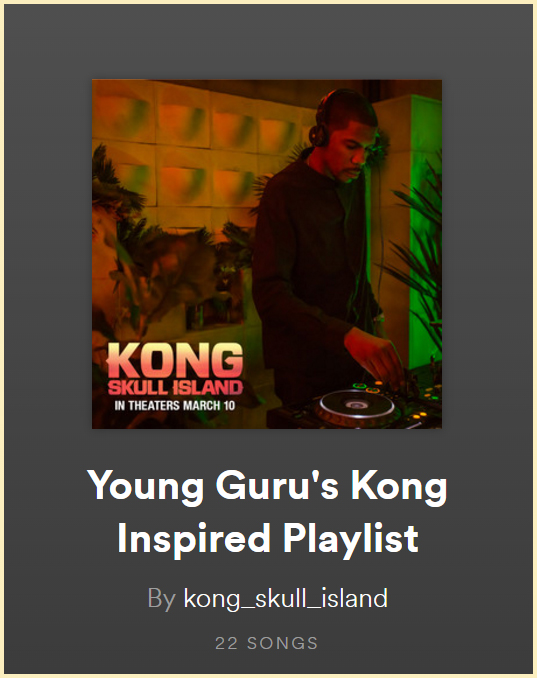 In partnership with the film's music supervisor, fans can now listen and share a Skull Island-inspired playlist on Spotify. Featuring rock greats like Jimi Hendrix, The Velvet Underground, Iggy Pop, Thin Lizzy and more, it's sure to be on heavy rotation. Producer and DJ Young Guru has also shared his own Skull Island playlist of dance music and remixes inspired by the film.

Los Angeles managed to survive a Kong invasion yesterday as the giant ape made its way through the city, leaving untold damage in his wake. His first stop was downtown, near the L.A. Live entertainment center.

Kong is making his way through Los Angeles and his first stop was @LALIVE! #LALovesKong pic.twitter.com/pK6YKIonKI

He also made his way down to the beaches near the LAX Airport, where first-hand accounts posted images to social media.

Something HUGE made its mark on a beach near LAX. Eyewitness accounts are encouraged. Investigate at your own risk. Send tips: #LAlovesKONG pic.twitter.com/mmqYXNA3SA

It seems he may be looking for familiar surroundings, as his tracks have now been spotted in the mountains. Kong is on the move!

Looking to get away from it all? Then you probably don't want to visit Skull Island. (Remember that trailer we told you about with monsters fighting monsters, explosions, etc? Yeah.) But if you're the adventurous type, Google Maps has helpfully pinpointed Skull Island—a small remote island in the South Pacific Ocean. Zoom in, take a look around and leave a review if you're so inclined.

The stars of Kong: Skull Island were dressed to the nines on February 28 as they celebrated the film's European premiere. Tom Hiddleston, Samuel L. Jackson, Brie Larson and John C. Reilly all gathered in London to celebrate the King!

A red carpet fit for a King. See the stunning photos from our European Premiere of #KongSkullIsland! #KongIsKing pic.twitter.com/buk9aEeRG3

If you prefer your movie monsters on the artsy side, you could always make a trip to Brooklyn and visit the Bottleneck Gallery's exhibit, "Tribe of Kong: Art Show." A mainstay of pop culture, the tribute to King Kong will feature special posters in honor of Kong: Skull Island. Learn more details here. The engagement runs for a limited time, so don't miss out!

On March 10, witness the rise of the King.

The final trailer for Kong: Skull Island was released today and it's a juicy one! The over-the-top, frenetic, two-minute-forty-three-second wild ride is filled with monsters, monsters fighting other monsters, people fighting monsters, explosions...well you get the idea. And it's fantastic. Just take a look for yourself.

If that got you sufficiently psyched up, tickets are available now.

And while you're riding those Kong: Skull Island endorphins, be sure to watch Samuel L. Jackson when he visits Ellen today. Check your local listings for tune-in time and channel.

TODAY: #kongskullisland’s @samuelljackson stops by @theellenshow. Check your local listings and tune in!

While the film's soundtrack won't go on sale until Friday, you can already listen to a preview at WaterTower Music's YouTube page. Take a journey to Henry Jackman's "The Island" and imagine yourself on Skull Island.

Be sure to check out Kong VR: Destination Skull Island. The mighty Kong has made his virtual reality debut on YouTube 360 and will also be available beginning February 28 at 6 pm PST at 1,500 Samsung Retail Demo Locations, 15 AMC Theater Locations and on the Samsung VR store. You'll join the Sky Devil helicopter squadron on a flight across the uncharted destination of Skull Island and awaken epic forces of nature. Monsters exist, and you don’t belong here…

We'll be updating this blog regularly with new updates, news and cast appearances, so check back often! The wait is almost over and #kongisking!