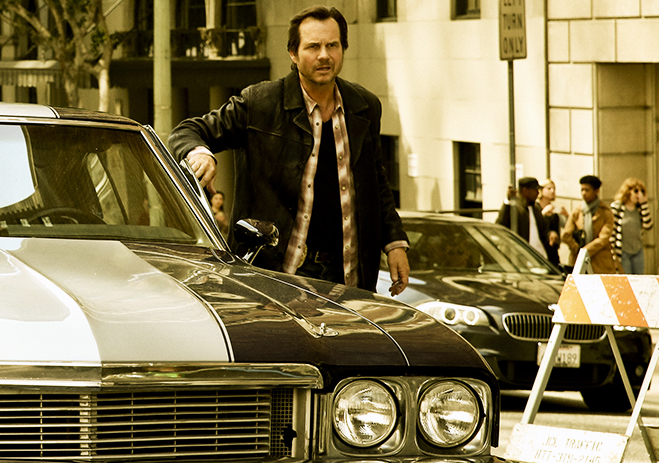 Veteran actor Bill Paxton who appeared in nearly 100 movies and television shows passed away Saturday at the age of 61 after suffering complications from heart surgery. The actor, who is perhaps best known for his work in such blockbusters as Titanic, Twister and Apollo 13, had recently wrapped filming all 13 episodes of the current CBS series, Training Day (produced by Warner Bros. Television). As of this writing, four episodes of the show have aired.

In a joint statement, CBS and WBTV said: "We are shocked and deeply saddened this morning by the news of Bill Paxton's passing. Bill was, of course, a gifted and popular actor with so many memorable roles on film and television. His colleagues at CBS and Warner Bros. Television will also remember a guy who lit up every room with infectious charm, energy and warmth, and as a great storyteller who loved to share entertaining anecdotes and stories about his work. All of us here offer our deepest sympathy to his wife, Louise, and his two children."

Social channels have been filled with tributes from Paxton's friends and industry colleagues since the shocking news was announced.

We were just two guys on top of the world. Rest easy my friend pic.twitter.com/R0ZwB0zv5q

Crushing. #RIPBillPaxton A gr8 talent & spirit. His passion contributed so much 2 #Apollo13 & all his wrk. We'll miss the hell out of U Bill https://t.co/j2Khv6fmCP

I am truly devastated at the passing of my friend Bill Paxton. He was a tremendously talented actor and a wonderful man.

He made this movie great--he acted his heart out. What a talented man. My thoughts are with his family. pic.twitter.com/rUcmmYME3h

Rest in power my dear friend, a fearless actor, director, artist. They don't make em like they used to, a true original. #billpaxton pic.twitter.com/OOQJuWK6Tw

God bless Bill Paxton. May he Rest In Peace. He was so kind and generous to all he worked with- an eternal child about creativity and life.

Some of my favorite memories are of floating around in a tiny vessel with big hearted,hilarious,brilliant Bill Paxton. Sad day.

Bill Paxton.1955-2017. So full of life you'd think he was immortal. Remembering stories is still making me laugh. So I guess he is immortal.

Thank you #BillPaxton You were the nicest man, The most generous actor, And a great dad. Gone but not forgotten.

Bill Paxton's FRAILTY is another movie that a tiny minority recognized was brilliant and now, sadly, it's become HORRIFYINGLY RELEVANT.

Just heard the so so sad news about my pal #BillPaxton. So talented, special and the sweetest guy you'd ever want to meet. RIP my friend.