Shooting began this past Monday on Warner Bros. Pictures’ re-imagining of the musical A Star is Born, starring Bradley Cooper and introducing Stefani Germanotta, or as the world more commonly knows her: Lady Gaga.

A little background on the film and then we'll get to some more specific Gaga details. From the WB press release earlier this week:

Cooper plays Jackson Maine, a country music star who is on the brink of decline when he discovers a talented unknown named Ally (Germanotta). As the two begin a passionate love affair, Jack coaxes Ally into the spotlight, catapulting her to stardom. But as Ally’s career quickly eclipses his own, Jack finds it increasingly hard to handle his fading glory.

Now on to what made this film shoot so extraordinary. Gaga just happened to be filming at mega music fest Coachella, where she was joined by co-star Cooper onstage.

I am so excited to star in my first movie alongside someone I'm so lucky to call my friend. I always wanted to be an actress on the big screen. The story of "A Star is Born" is so special and I'm so grateful to Bradley for making my dream come true. Can't wait for you to meet Ally. She has her first scene in 5....⏰

Gaga shared with fans on her social media channels earlier in the week details on how to see her performance and be a part of the film. 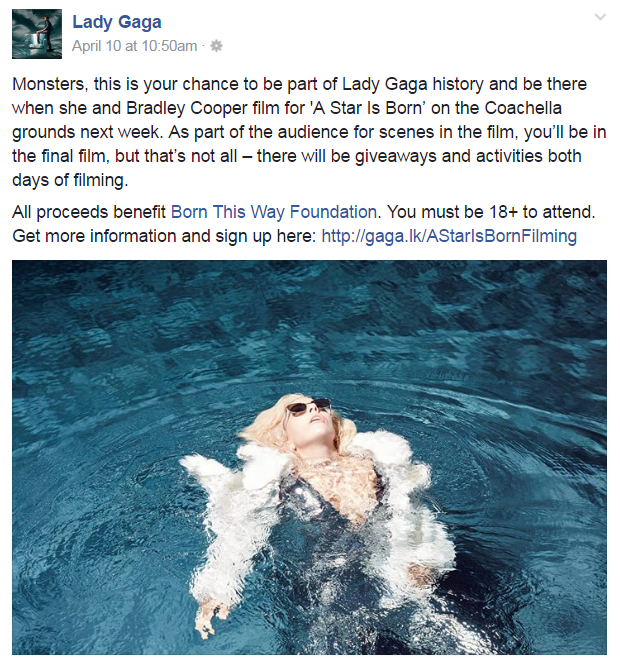 If you're one of Gaga's Little Monsters who wasn't able to attend last night's performance there's still time to be part of this evening's fun. Tickets are still available for $10 but going fast!

A Star is Born is set to open in theaters September 28, 2018. See Lady Gaga tonight and see yourself on the big screen come September 2018!