In case you missed the Red Carpet Premiere in Los Angeles, you can watch it now before King Arthur: Legend of the Sword takes over theaters tomorrow.

You may not be able to visit Camelot, but The Ellen DeGeneres Show is giving away an all-inclusive trip to Great Britain to celebrate the upcoming May 12 release of King Arthur: Legend of the Sword. Enter for your chance to win a five-day trip to experience Arthurian Britain! With whiskey tasting, private tours of the greatest castles, and even zip-lining over breath-taking views, you'll be sure to have the time of your life. Learn more here and be sure to read the official rules before entering.

Fans got the royal treatment yesterday at 200 AMC theaters across the U.S. with a free advanced screening of King Arthur: Legend of the Sword. A lucky group of viewers even got to watch the movie with the King himself, Charlie Hunnam, along with director Guy Ritchie and Djimon Hounsou, who plays Sir Bedivere in the film.

Before the screening Hunnam, Hounsou and Ritchie sat down with IMDB for a Facebook live session to discuss the film. Watch a playback here:

If you weren't able to attend a screening we've got some sneak peeks to tide you over until May 12 when the movie hits theaters.

And click over to Uproxx to see even more action.

King Arthur can sword fight in an exclusive clip from #KingArthur: The Legend of the Sword' https://t.co/j0cV5BRzQ4 pic.twitter.com/BUQTPx6cuj

We've also added dozens of new photos from the film including this cameo shot of David Beckham as Trigger, the Blackleg leader who instructs Arthur to pull Excalibur from stone. 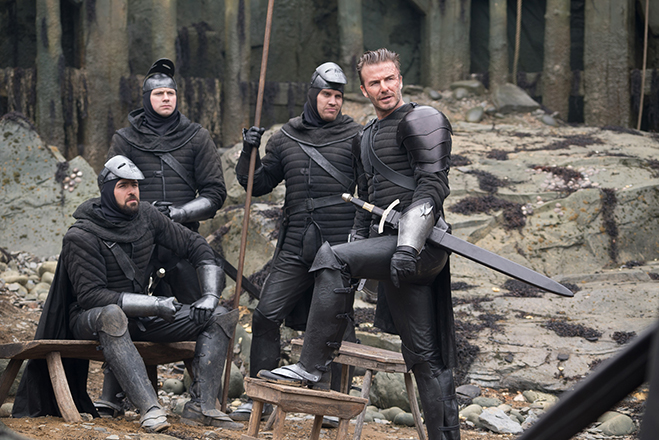 And Aidan Gillen in his role as Goosefat Bill (you may recognize him as Littlefinger from Game of Thrones).

As well as this fantastical shot from the opening moments of the film.

Collider yesterday debuted a new poster for the upcoming fantasy/thriller/adventure King Arthur: Legend of the Sword. Designed by seminal artist Shepard Fairey's Studio Number One, the artwork is a clever redux of a playing card featuring Arthur (Charlie Hunnam) and Vortigern (Jude Law) with the text "From Stone to the Throne," in reference to Arthur pulling the sword Excalibur from stone and becoming the rightful King of England. 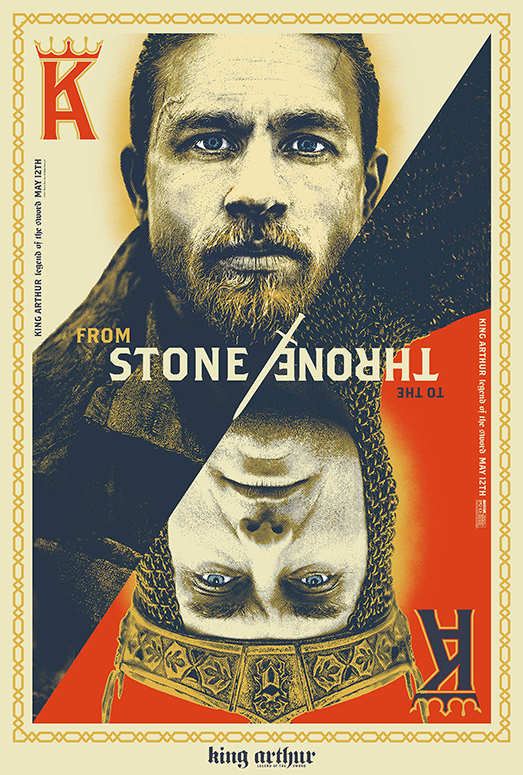 Fairey is the artist behind the ubiquitous Andre the Giant OBEY street sticker art and clothing line, as well as and the "Hope" campaign posters of that came to define the 2008 Obama presidential campaign.

The new King Arthur: Legend of the Sword poster was released in celebration of the upcoming "King for a Day" promotion taking place on April 27, where fans will have the chance to attend an early screening of the film at 200 AMC theaters nationwide.

Can't make it to a "King for a Day" screening? Don't worry, you can still help Arthur and his gang take back the kingdom when King Arthur: Legend of the Sword opens in theaters on May 12.