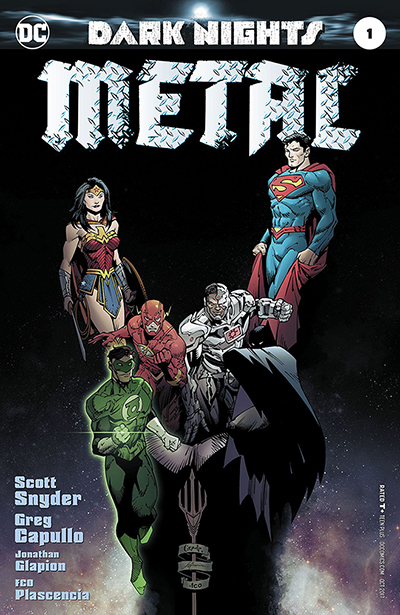 DC Comic fans are in a frenzy over this Wednesday’s premiere issue of Dark Nights: Metal, a six-issue monthly miniseries, created by the reunited all-star duo of writer Scott Snyder and artist Greg Capullo, who collaborated for five years on the wildly successful Batman series.

Snyder's excitement is palpable as he says: "I’ve been planning Metal for as long as I’ve been writing Batman, but I want Metal to be built upon the stories happening now in Rebirth. Most of all we want to create new material that feels really modern and different. And above all, it’s going to be fun. Even with terror and nightmares, it won’t be grim. Dark Nights: Metal will be celebratory, huge and crazy."

Snyder revealed to the Washington Post's Comic Riffs that he's even bringing in a character from Vertigo's The Sandman series after getting permission from comic book legend Neil Gaiman. We won't spoil the surprise, but if you can't wait, you can find out for yourself.

The Dark Multiverse is revealed in all its devastating danger—and the threats it contains are coming for the DC Universe! It’s being described as a DC event unlike any other—one that will push Batman, Superman and heroes of the Justice League beyond their limits to take on threats unlike any our world has ever seen! It will take the combined might of the World’s Greatest Heroes as you’ve never seen them before to face what’s coming their way!

And if you want some background music to accompany you on your journey, Snyder and Capullo have posted a special DC: Metal playlist on Spotify. Enjoy the ride.