There has been no holiday slow down here, with a flurry of new trailers released throughout November and December, along with some exciting announcements. From our first look at the next Fantastic Beasts installment to a marmalade-loving teddy bear on the loose in London, this taste of 2018 has something for everyone.

From Clint Eastwood comes The 15:17 to Paris, which tells the real-life story of three men whose brave act turned them into heroes during a highspeed railway ride.

From filmmaker Steven Spielberg comes the science fiction action adventure Ready Player One, based on Ernest Cline’s bestseller of the same name, which has become a worldwide phenomenon.

While searching for the perfect present for his beloved Aunt Lucy’s hundredth birthday, Paddington sees a unique pop-up book in Mr. Gruber’s antique shop and embarks upon a series of odd jobs to buy it. But when the book is stolen, it’s up to Paddington and the Browns to unmask the thief.

Smallfoot turns the Bigfoot legend upside down when a bright young Yeti finds something he thought didn’t exist—a human. News of this Smallfoot throws the simple Yeti community into an uproar over what else might be out there in the big world beyond their snowy village, in an all-new story about friendship, courage and the joy of discovery.

Chris Hemsworth (Thor, The Avengers films) and Oscar nominee Michael Shannon (Revolutionary Road, Nocturnal Animals) star in 12 Strong, a powerful new war drama from Alcon Entertainment, Black Label Media and Jerry Bruckheimer Films. Based on the best-selling book Horse Soldiers, it is a story of heroism based on true events that unfolded a world away in the aftermath of 9/11.

Fantastic Beasts: The Crimes of Grindelwald 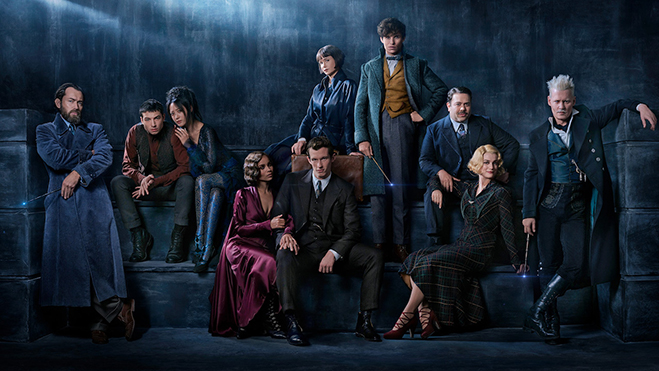 Primatologist Davis Okoye (Dwayne Johnson), a man who keeps people at a distance, shares an unshakable bond with George, the extraordinarily intelligent, silverback gorilla who has been in his care since birth. But a rogue genetic experiment gone awry mutates this gentle ape into a raging creature of enormous size. To make matters worse, it’s soon discovered there are other similarly altered animals. As these newly created alpha predators tear across North America, destroying everything in their path, Okoye teams with a discredited genetic engineer to secure an antidote, fighting his way through an ever-changing battlefield, not only to halt a global catastrophe but to save the fearsome creature that was once his friend.

Jason Bateman and Rachel McAdams star as Max and Annie, whose weekly couples game night gets kicked up a notch when Max’s charismatic brother, Brooks (Kyle Chandler), arranges a murder mystery party, complete with fake thugs and faux federal agents. So when Brooks gets kidnapped, it’s all part of the game…right? But as the six uber-competitive gamers set out to solve the case and win, they begin to discover that neither this game—nor Brooks—are what they seem to be.

And for something a little different...

Batman is coming to DVD, Blu-ray and Digital this January in two separate releases.

Scooby-Doo & Batman: The Brave and the Bold

For the whole family, check out Scooby-Doo and the gang as they run into notorious crooks that are too hot to handle. That's when the Caped Crusader himself swings in to save the day! After an unsolved case from his past comes back to haunt him—and the mysterious Crimson Cloak threatens to take over Gotham—Batman recruits Mystery Inc. to help crack the case.

For something a little darker, there's Batman: Gotham by Gaslight. It's Batman vs. Jack the Ripper in an Elseworld's adventure that imagines the Dark Knight over a hundred years ago in a turn-of-the-century Gotham.