"I’ve been playing mobsters and gunmen for eight years now in more than 30 pictures. Audiences have despised me with a deep and burning hate. All of a sudden I’m a hero. In this Casablanca, I’m a tough American yegg up against a batch of Fascists in French Morocco. I don’t know what all my fans who loved to hate me are going to think about it."
Humphrey Bogart, during the filming of Casablanca in 1942

This holiday season marks the 75th anniversary of the worldwide premiere of one of Hollywood's greatest and most beloved films, Casablanca. The title itself not only conjures up images of such silver screen icons as Humphrey Bogart and Ingrid Bergman, but also the seemingly endless quotes that have cemented their place in the global lexicon.

Released on November 26, 1942, Casablanca was a decently successful film during its initial theatrical run, finishing at a respectable #7 at the box office. Though the film always coveted "Best Picture" Oscar (the second Warner Bros. film to grab that revered statuette, following 1937's now largely forgotten The Life of Emile Zola), no one could have foreseen the future legacy that has come since its release.

Starring a proven lead actor playing against type in Bogart and a script that did not even have an ending when the actual filming began, Casablanca didn't seem like it was heading for immortality. Looking back it's amazing that what was initially thought of as just another film—at a time when studios were releasing a new movie nearly every week—would go on to become an inarguable celluloid classic. Indeed, its seamless blend of romance, drama and comedy set against the politics of its day is even more powerful 75 years later.

The saga of what would become Casablanca began as a play called Everybody Comes to Rick’s, by playwrights Murray Burnett and Joan Alison. Although the play was never produced, Warner Bros. story editor Irene Diamond found the script during a trip to New York and convinced WB’s head of production Hal B. Wallis to buy the rights and studio chief Jack Warner loosened the Warner Bros. purse strings and paid more money than had ever been spent for an unproduced play. The twin-brother screenwriting team of Philip and Julius Epstein were brought in to adapt the story to the screen with Howard Koch also receiving a piece of the Academy Award the script garnered.

Co-screenwriter Julian Epstein from the featurette, You Must Remember This: A Tribute to Casablanca

There was a lot of chaos in the second half of the picture because we were shooting and there was a stop-date on [Ingrid] Bergman and nobody knew what the ending was going to be. So in the front office [at the studio] there was a great deal of what can only be described as hysteria. During the hysteria about the ending, my brother Phil and I looked at each other and said, 'Round up the usual suspects' and we knew we had an ending.

Filming began in May of 1942, nearly six weeks later than originally scheduled, and director Michael Curtiz (who won the film's third Oscar for "Best Director") was forced to shoot the movie in sequence as the second half of the script had yet to be completed. This fact led the film's leading lady, Bergman, to continually ask her director and the writers which of the two men she would end up with at the conclusion of the film: Bogart or Paul Henreid.

In retrospect this unwritten mystery may have helped with the film's suspenseful love triangle that continues to rivet audiences as the players themselves were acting with no knowledge of what was to come. They were literally portraying their characters in the moment as the future had not yet been penned.

In 2005, the American Film Institute (AFI) included these six lines from Casablanca in their "100 Years…100 Movie Quotes" list. Interesting to note that no other film had more than three quotes included in the Top 100.

The famous final line of the film: “Louis, I think this is the beginning of a beautiful friendship” was actually written by producer Hal B. Wallis after filming had been completed. In fact, Bogart had to be brought back in to dub Wallis’ last minute addition over the last scene of Bogart and fellow Oscar nominee Claude Rains walking into the mist (pictured below). A little movie magic that has gone on to become one of Hollywood’s most memorable last words. 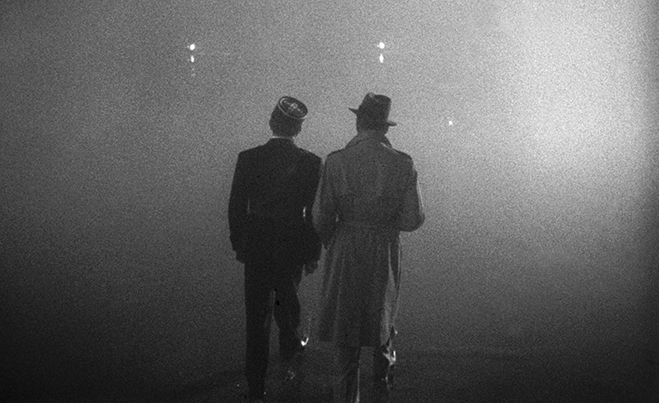 Casablanca is readily available on Blu-ray and Digital.