These may be divisive times, but nothing can bring us together like a warm, melty pizza shared with friends and family. And there's no better day of the year to sit around the table—or, let's be real, on the couch—and enjoy a few slices of thin crust, deep dish, Chicago style or all of the above than today, National Pizza Day.

Pizza in various forms has ancient beginnings with flatbreads covered in different toppings that were eaten throughout the Middle East, Greece and Egypt. But the pizza we generally recognize today with crust, tomatoes and cheese originated in Naples, Italy in the 1880s. The first U.S. pizzeria, G. Lombardi's, was opened in New York City in 1905 and is still in business today.

And of course, the famous pie has infiltrated popular culture as well. From Ross' painful attempt at flirting by explaining the smell of gas pizza ovens on "Friends" to the media frenzy around a pizza delivery in "Dog Day Afternoon," it's clear why everyone's favorite meal deserves its own holiday. So enjoy this gallery of pizza pics while you wait for your doorbell to ring with that speedy delivery! 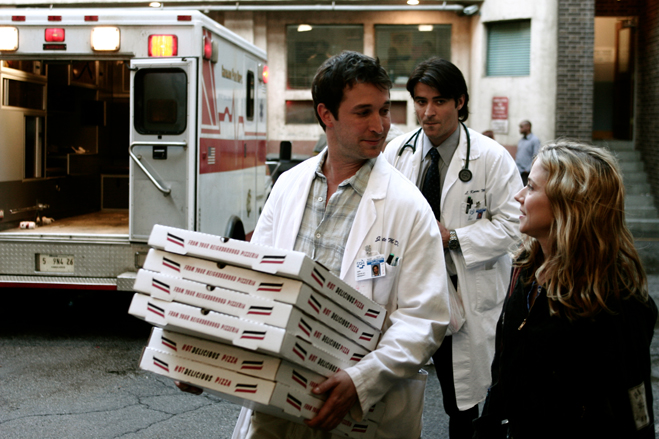 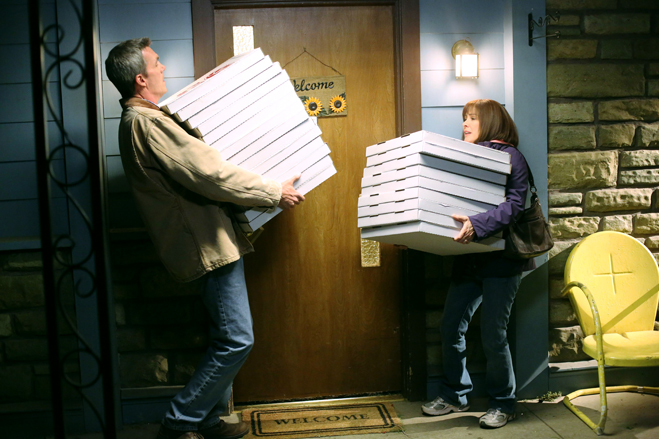 Mike and Frankie Heck (Patricia Heaton and Neil Flynn) prove there's no such thing as too much pizza. 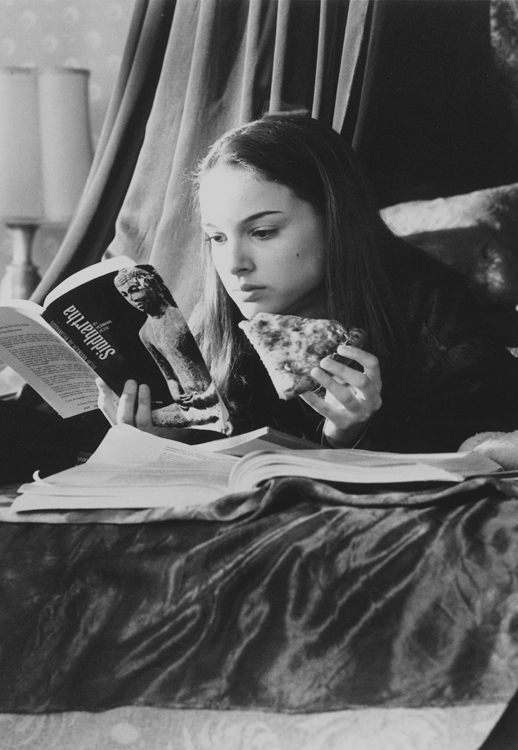 A then fifteen-year-old Natalie Portman knows that pizza goes great with an impending alien invasion in "Mars Attacks!" 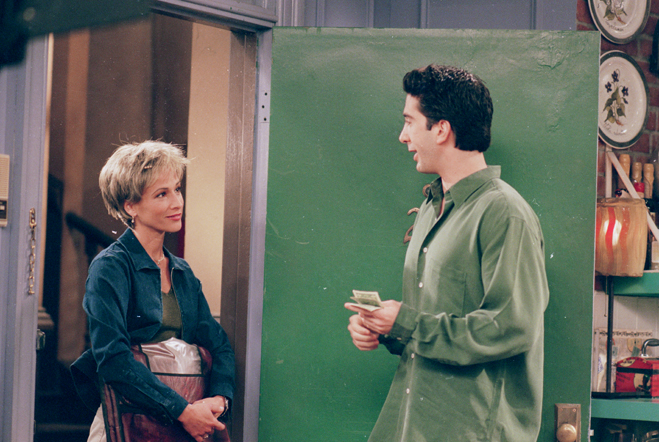 Ross makes everyone cringe when he tries to charm the pizza delivery lady by talking about the smell of (natural) gas in the episode titled "The One Where Ross Can't Flirt." 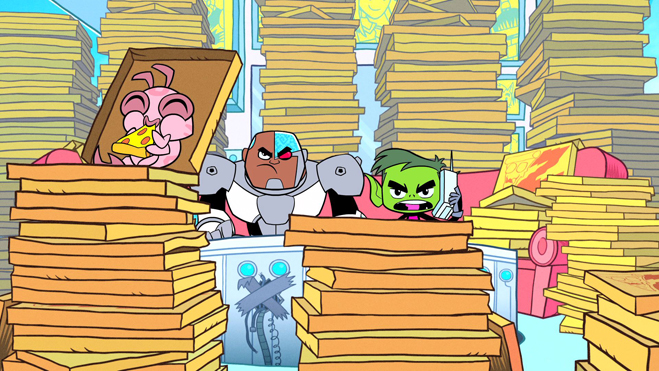 The "30 minutes or less" delivery guarantee is put to the test in this "Hey Pizza!" episode of "Teen Titans Go!"

Red wine in plastic cups is the perfect pairing to a late-night slice, as seen here in this second season "The Mentalist" episode, "The Red Scare." 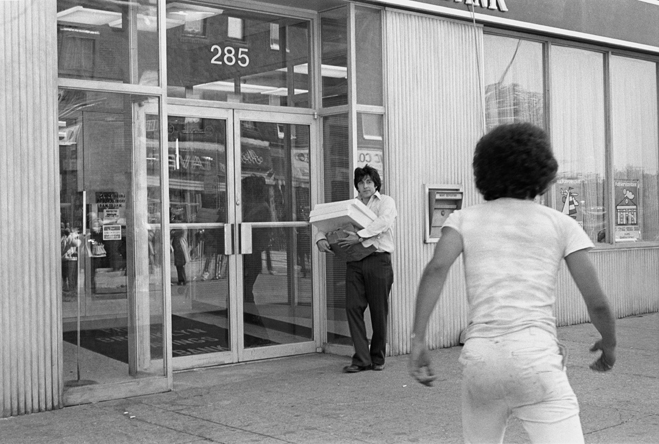 As part of ongoing negotiations, Sonny (played by Al Pacino) orders pizza, soft drinks and aspirin for his hostages inside the Brooklyn bank he and accomplice Sal (John Cazale) held up at gunpoint earlier in the day. The botched job becomes a full-fledged media melee with even the delivery boy, upon seeing the news cameras, declaring, "I'm a f*&@ing star!" 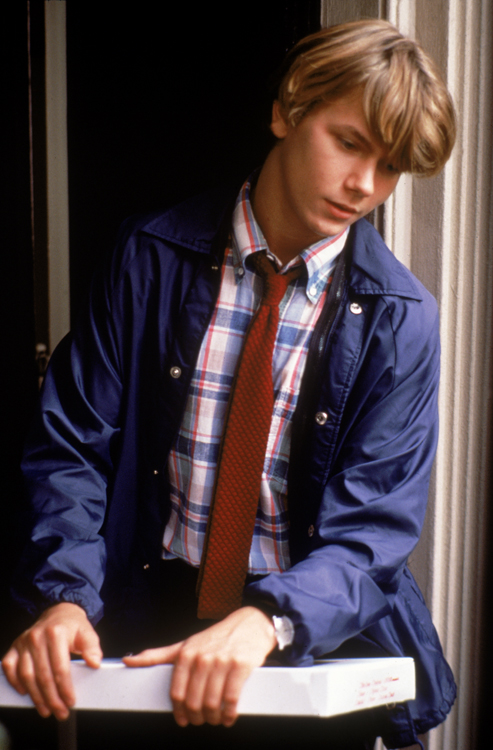 Another Sidney Lumet film (he also directed the above "Dog Day Afternoon"), River Phoenix received an Academy Award nomination for his role as Danny, a talented teen pianist with a family secret who must live life on the run. 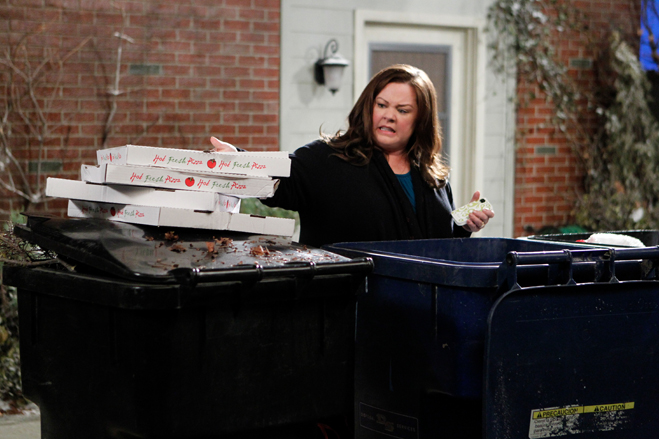 Admittedly, the worst part about pizza is recycling the boxes. Here, Melissa McCarthy as Molly Flynn deals with a pile-up in "They Shoot Asses, Don't They?" which aired in season four of "Mike & Molly."

"Trouble with the Curve" 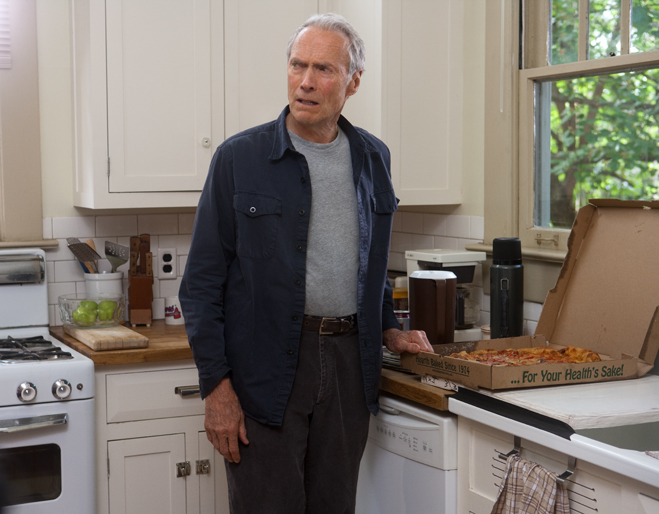 Clint Eastwood keeps his game face on before digging into a large pepperoni and mushroom in this photo from 2012's "Trouble with the Curve," which he both starred in and served as producer.