The Met Gala has arrived at the Warner Bros. Hollywood Studio Tour's Stage 48: Script to Screen. From now until July 13th, Ocean's 8 fans can get up close and personal with some of the designer dresses worn by the fierce all-female cast in this summer’s breakout film. Buy tickets for this special exhibit now. 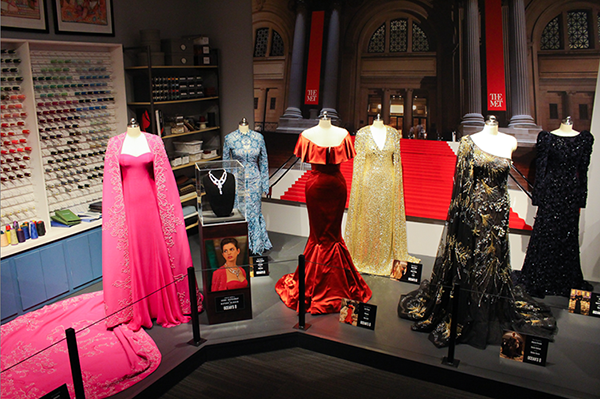 Check out the cast of Ocean's 8 at the film's world premiere at Lincoln Center's Alice Tully Hall in New York City:

The 8 have arrived at the #Oceans8 NY Premiere!

Welcome our detective @J_Corden to the #Oceans8 black carpet!

The stars of Ocean's 8 were in attendance at last night's Met Gala. The theme of this year's bash was "Heavenly Bodies: Fashion and the Catholic Imagination." Here are Mindy, Anne, RiRi and Sarah taking the red carpet by storm.

Let the heist begin! Ocean's 8 is just over a month away from its worldwide debut in theaters on June 8.

Summer's certain breakout star, Akwafina, who not only appears in Ocean's 8 but also the highly anticipated Crazy Rich Asians—coming to theaters August 17—was recently featured in the Los Angeles Times being touted as a "comedy secret weapon." The rapper/actress said of her exploding fame:

Crazy Rich Asians director Jon Chu praised her all-around talent in the write-up saying, "We let her riff a lot, and it raised everybody's game that she could be bold, and herself, and it could fit within this world." Read the article in its entirety here on the Los Angeles Times.

The Ocean's 8 cast made an appearance at last week's CinemaCon 2018, looking sharp and doing the "Ocean" family proud. Here is their red carpet arrival.

Regram from @wbpictures: Having this much fun is a crime. The cast of #Oceans8 arrives at #CinemaCon2018.

At the event, which was moderated by Will Arnett, the cast presented never-before-seen footage to the lucky audience members.

See you in theaters on June 8 (but maybe keep your valuables at home)!