50 years ago today, Steve McQueen and Warner Bros. redefined the modern cop picture with the release of Bullitt. Based on the 1963 novel Mute Witness, the property was purchased by producer Philip D’Antoni as a Spencer Tracy vehicle, but after Tracy’s death in 1967, McQueen and his company, Solar Productions, were able to acquire the rights. The result was the 5th highest-grossing movie of 1968, and a classic of the police/detective genre.  Below are some rare photos from the Warner Bros. Archives, starting with this one-sheet poster from the film’s original release. 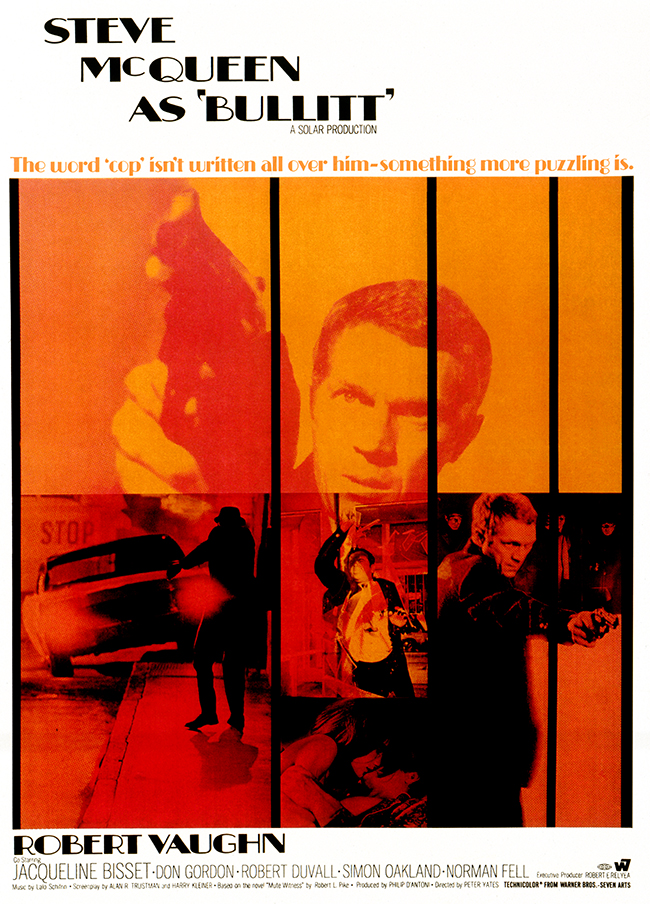 In such a turbulent year as 1968, it seemed strange that the ultimate “rebel” movie star would play a policeman. However, Steve McQueen, always eager to challenge himself, accepted the role and created a complex, multilayered portrayal of a man living by his own code of honor. Frank Bullitt would become the defining role of his career. 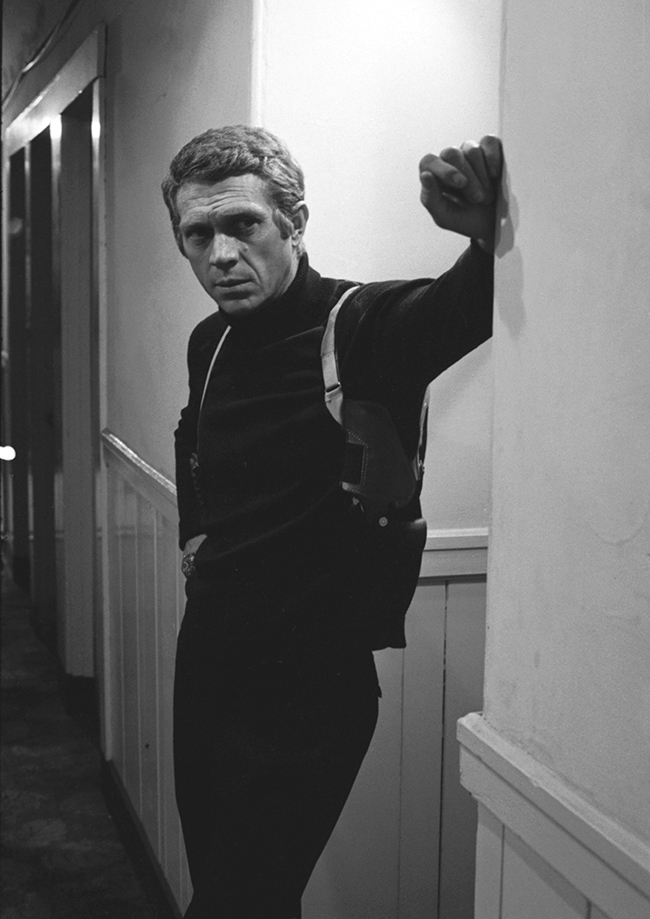 Another poster showing how the film was advertised to appeal to counterculture audiences. 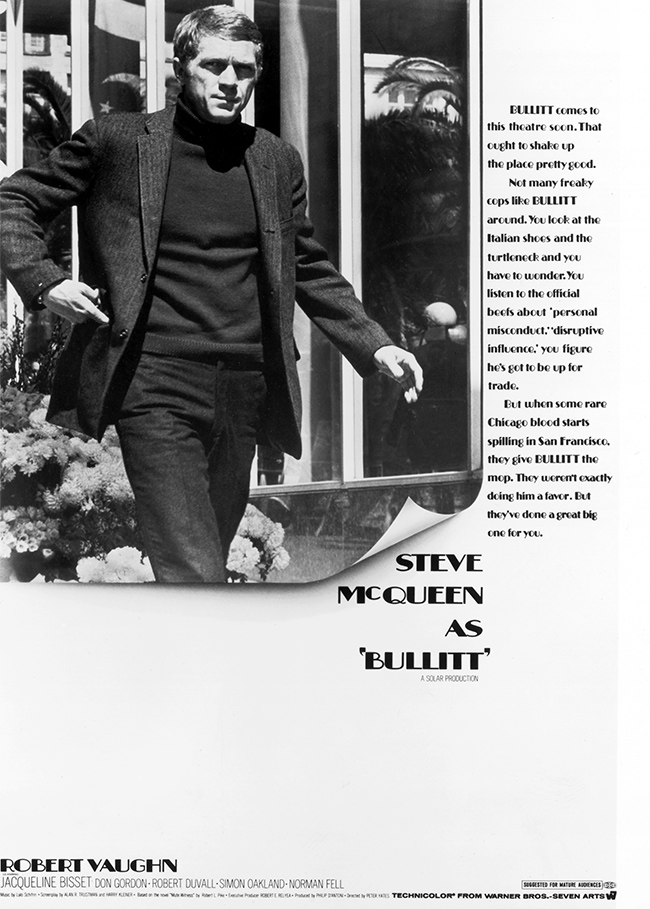 As the film’s producer as well as its star, Steve McQueen was able to insist that Bullitt be shot entirely on location in San Francisco and its environs. This was a wise decision, as it brought a verisimilitude to the movie that was in line with what audiences were responding to more and more in the late 1960s. However, this also brought new challenges, as evidenced by this huge crowd gathered to watch McQueen during filming. Note Robert Duvall as the taxi driver, plus director Peter Yates (in green turtleneck) and cinematographer William A. Fraker (with beard) standing behind the camera. 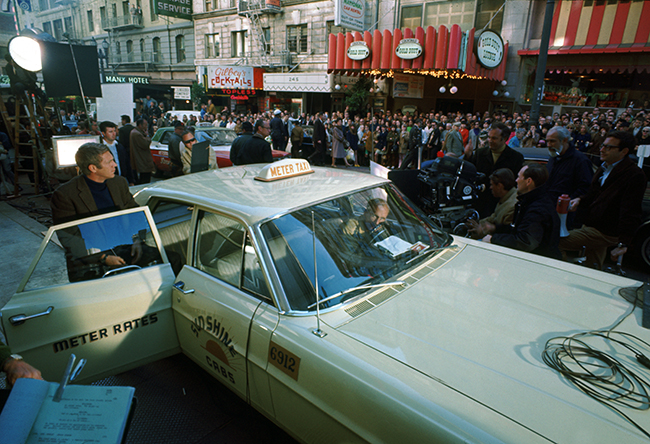 Robert Vaughn plays the determined San Francisco politician Walter Chalmers in Bullitt. He and McQueen had co-starred in The Magnificent Seven eight years prior, and would appear together again in 1974’s disaster epic The Towering Inferno. 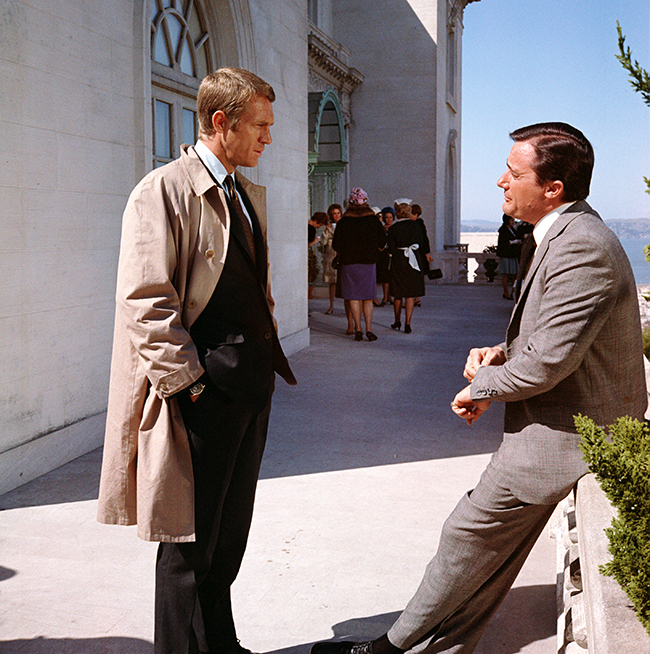 Director Peter Yates and Steve McQueen. Yates was recommended by Bullitt screenwriter Alan Trustman due to his fine direction of a car chase in the 1967 British film Robbery. He would direct more than 20 films after Bullitt, most notably the Best Picture nominees Breaking Away (1979) and The Dresser (1983). 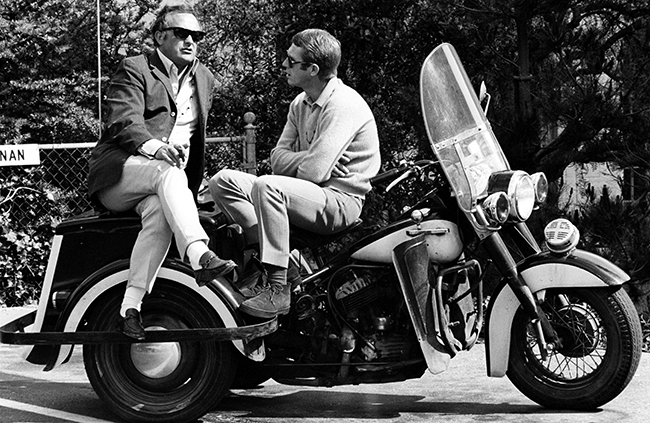 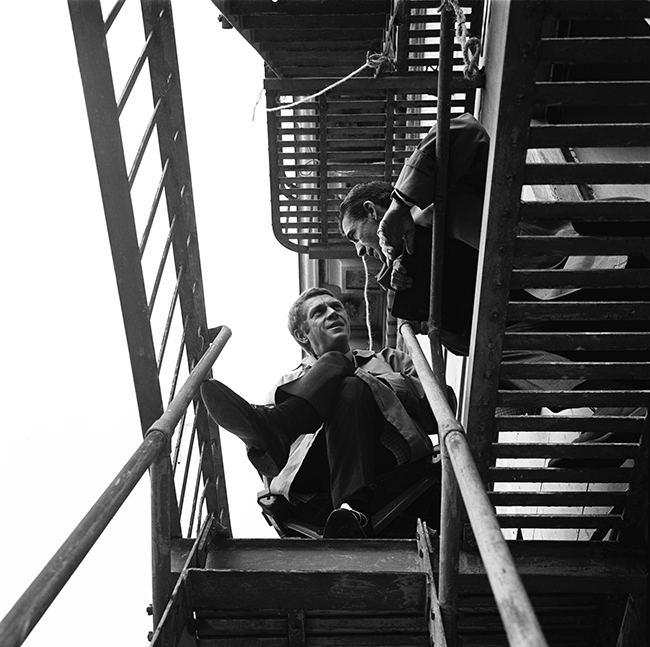 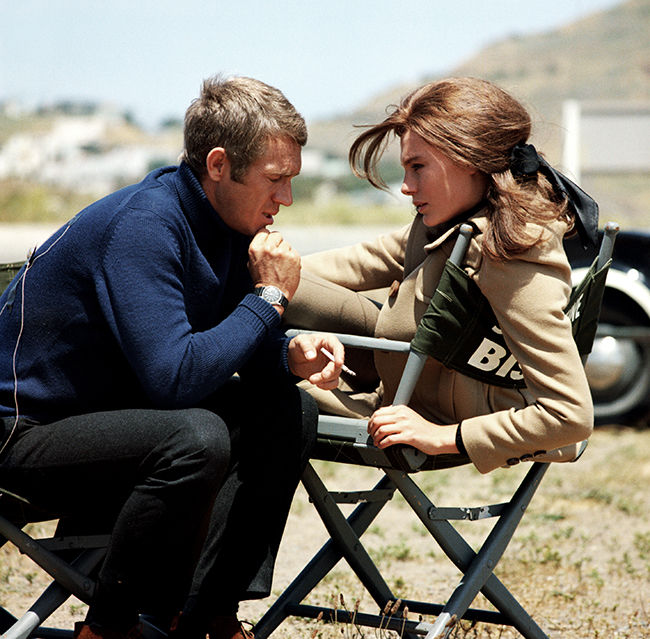 Of course, no overview of Bullitt would be complete without mentioning its legendary chase scene. This thrilling pursuit between a Ford Mustang and Dodge Charger revolutionized action filmmaking, and even half a century later, still stands as the greatest car chase ever filmed.  It was this sequence that was most likely responsible for Frank Keller winning the Academy Award for Best Film Editing.

Cinematographer William A. Fraker, whose stellar photography was also on view in Rosemary’s Baby earlier in 1968, adjusts the camera while sitting at the front of the camera car.  He and director Yates made the conscious decision to avoid undercranking (slowing down the film in the camera to speed up the action), choosing instead to film the cars at sometimes dangerously high speeds. This gave the finished product a level of realism and excitement that audiences had never seen before. 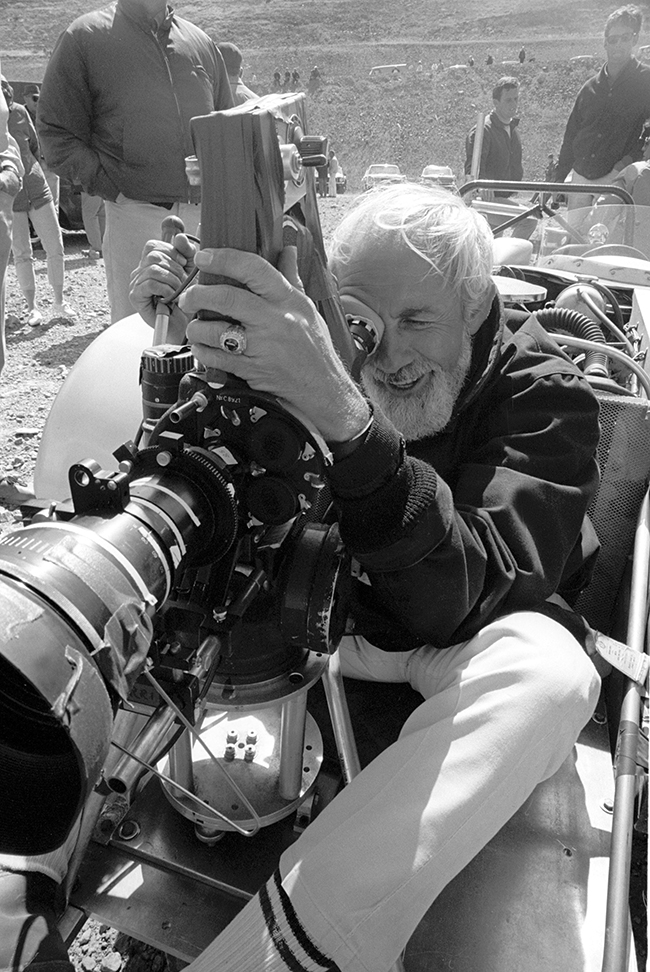 A camera rig captures Steve McQueen in the Mustang. He handled much of the driving in the chase himself. 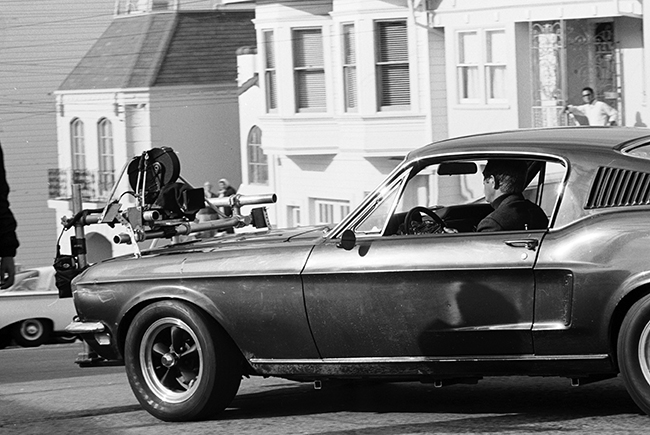 A more complex camera rig for interior shots is attached to the Charger. He’s hard to see, but the car is being driven by one of the hit men, who is played by longtime stunt driver Bill Hickman. Also note the cameraman seated in the trunk. 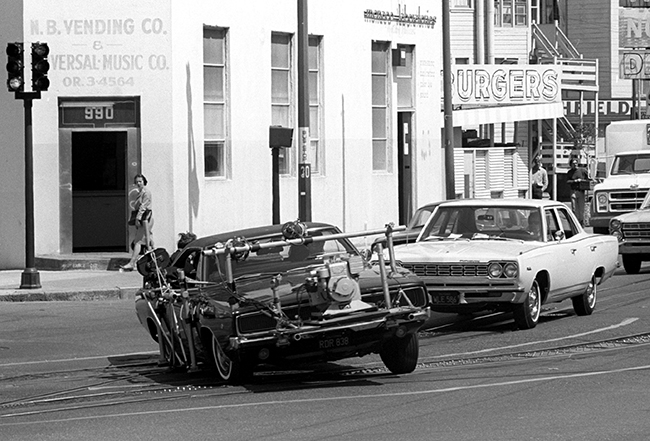 William A. Fraker (in passenger seat) and two crew members during the filming of the chase. According to Fraker, the top speed reached during the chase was 124 MPH! 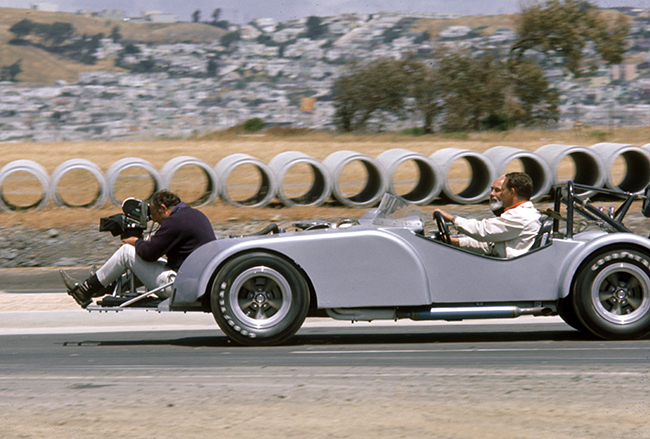 One final shot of the King of Cool, the incomparable Steve McQueen as Frank Bullitt. 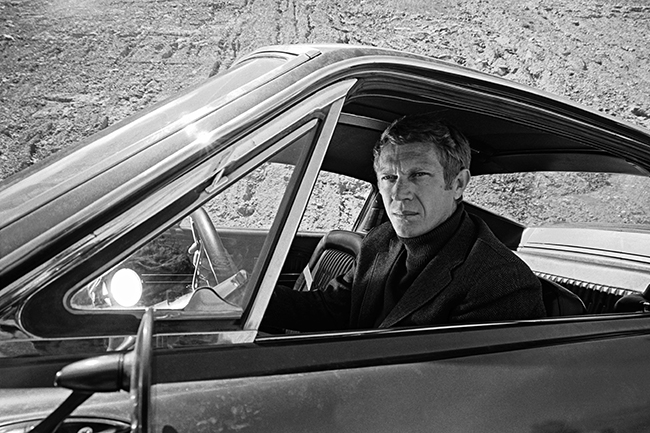