As actor, director, and producer, few talents in Hollywood history have enjoyed as durable and remarkable a career as Clint Eastwood. With the December 14 release of The Mule, the long-standing tradition of his movies being released in December continues. Courtesy of the Warner Bros. archives, here’s a pictorial look back at four legendary Eastwood films which celebrate their 10th, 35th, 40th, and 45th anniversaries this month.

Eastwood stars as Earl Stone, a man in his 80s who is broke, alone, and facing foreclosure of his business when he is offered a job that simply requires him to drive. Easy enough, but, unbeknownst to Earl, he’s just signed on as a drug courier for a Mexican cartel. 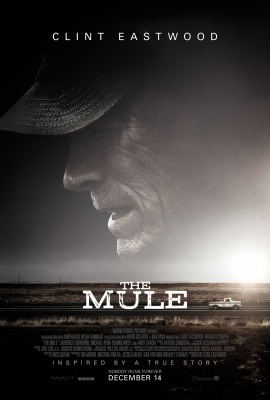 In theaters December 14, get tickets today.

Released on Christmas Day 1973, Magnum Force may be the most interesting of the four sequels to Dirty Harry, since it turns a mirror on Harry himself when he is forced to deal with fellow policemen who are extrajudicially killing various San Francisco criminals. Audiences loved the movie, as it became a bigger hit than its predecessor, and the sixth highest-grossing film released in 1973. Here Clint Eastwood as Harry Callahan, unbeknownst to him, is conversing with some of the rogue cops, played by Tim Matheson, Robert Urich, Kip Niven, and David Soul. 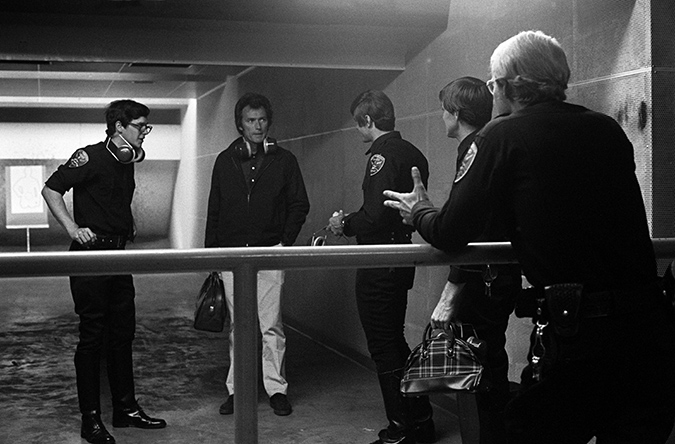 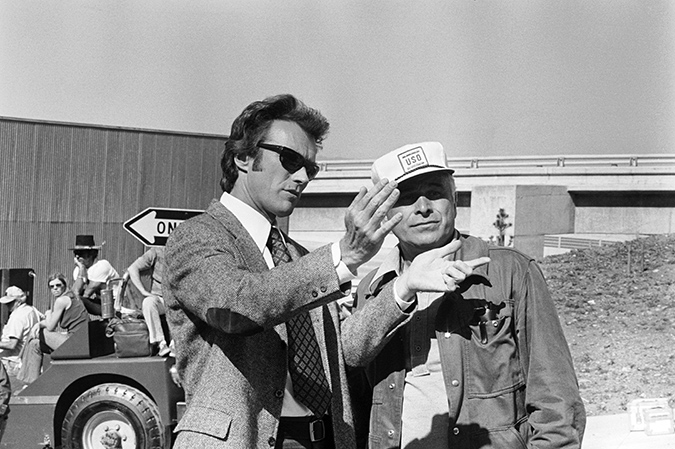 Hal Holbrook, who plays Lieutenant Briggs, and Clint Eastwood on the set. 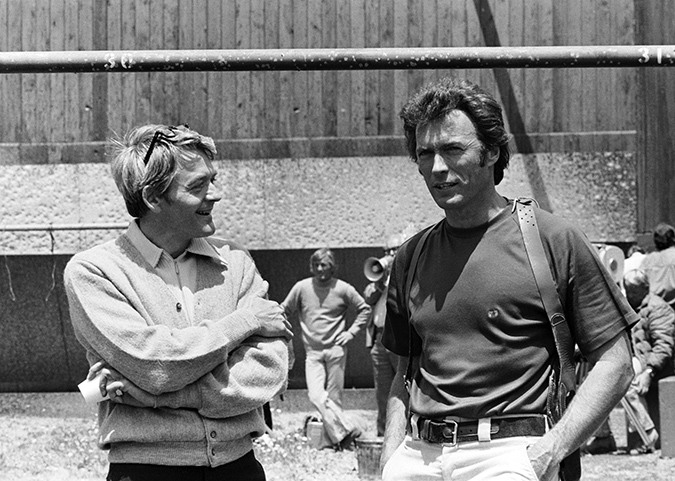 What may be the oddest film of Clint Eastwood’s career was ironically one of his most popular. Every Which Way But Loose, released on December 20, 1978, was a contemporary comedy with a country-western, working class twist where Clint’s co-star was an orangutan named Clyde. Even though it veered far from Eastwood’s hugely popular action films, it proved to be an unqualified smash. Indeed, if ticket price inflation is considered, it’s second only to American Sniper as the most successful film of Eastwood’s entire career! Here’s the original one-sheet poster with artwork by Bob Peak. 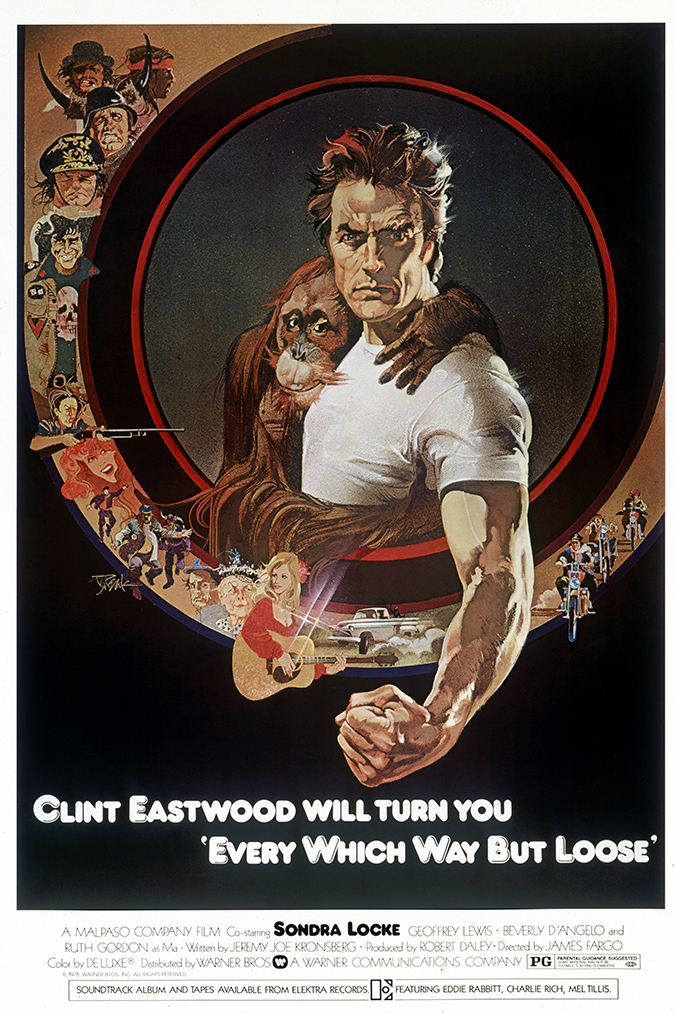 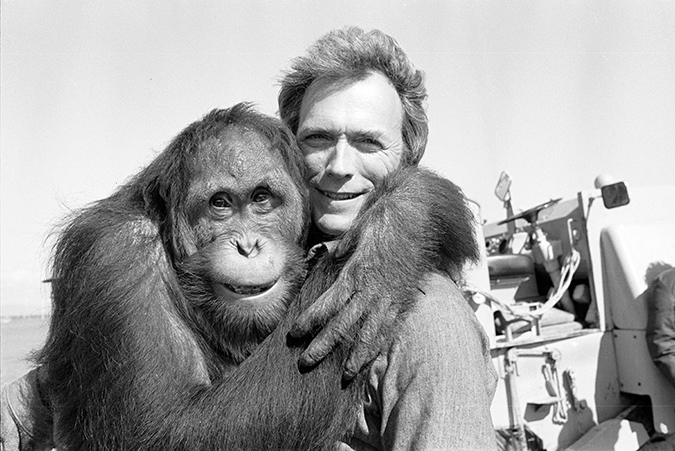 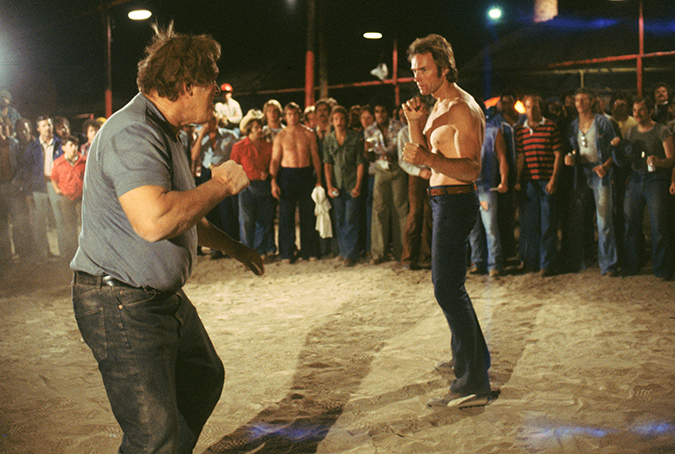 Clint Eastwood, director James Fargo (in baseball cap), and crew members are filmed by some budding filmmakers in a scene that sadly didn’t make the final cut. 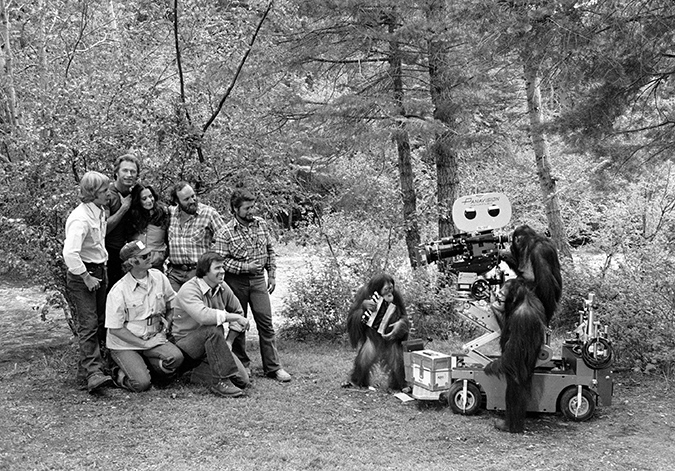 The fourth title in the Dirty Harry series, and the only entry directed by Eastwood himself, Sudden Impact, was released on December 9, 1983. Again, it was a smash hit, the highest-grossing of the entire series, and the seventh-biggest release of 1983. Here is the striking original one-sheet poster designed by the legendary Bill Gold. 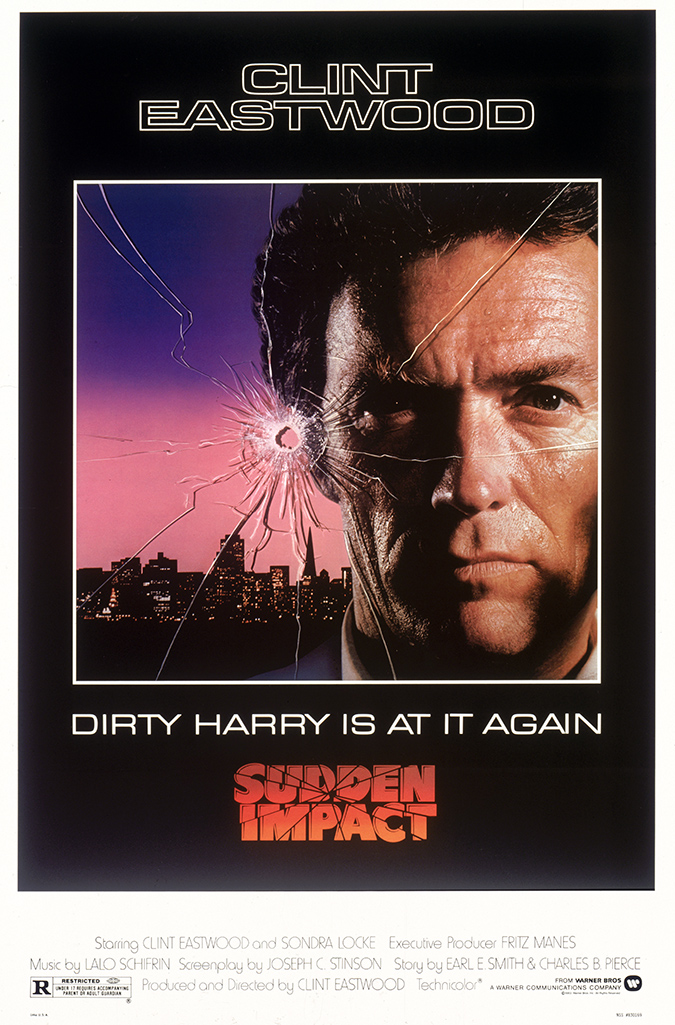 In this scene, Clint Eastwood as Harry Callahan utters one of the most famous movie lines of all time: “Go ahead, make my day.” 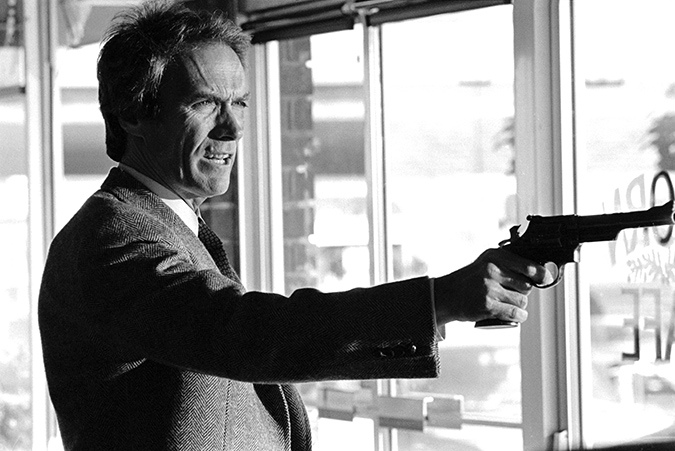 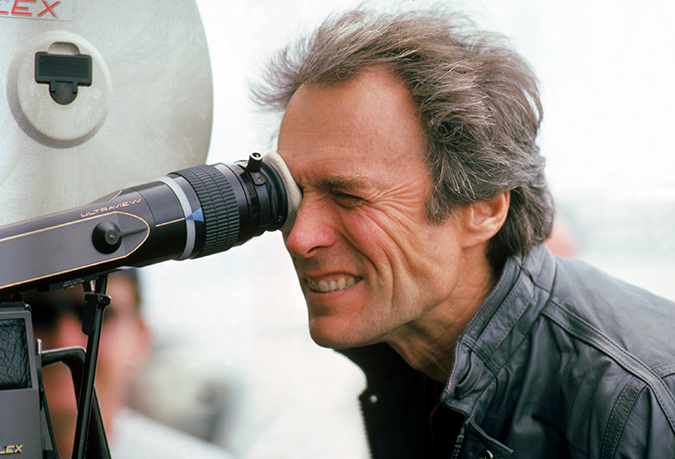 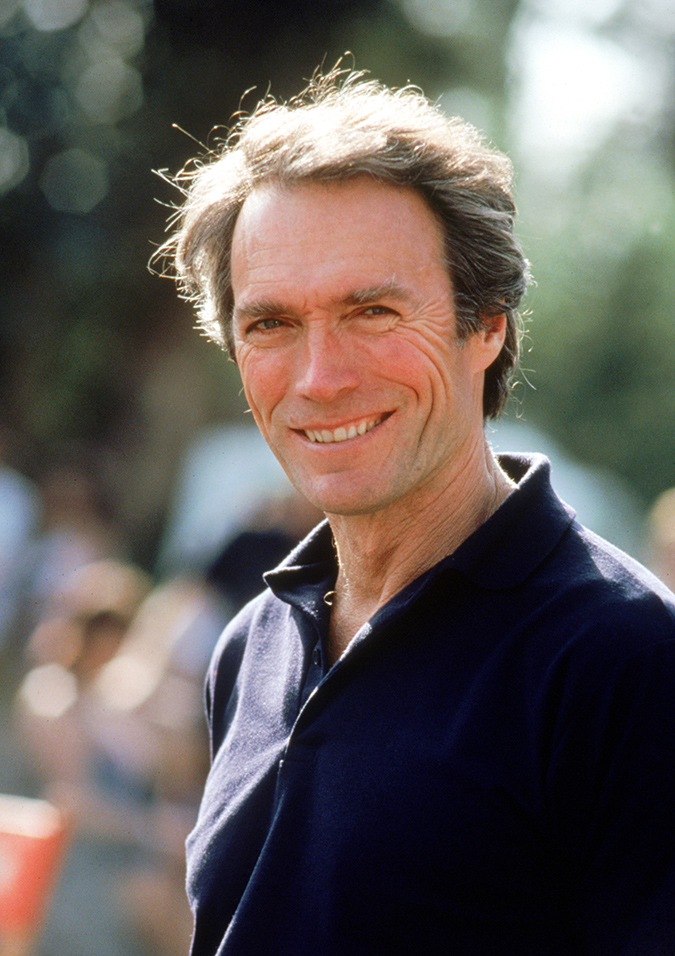 Gran Torino was released on December 12, 2008. As a widowed Korean war veteran who becomes the unlikely protector of his Hmong immigrant neighbors, Eastwood showed that his acting/directing skills and star power had not diminished in the slightest. The movie ended up being his highest-grossing movie as an actor. Here Eastwood stands by Bee Vang, Brook Chia Thao, Chee Thao, and Ahney Her. 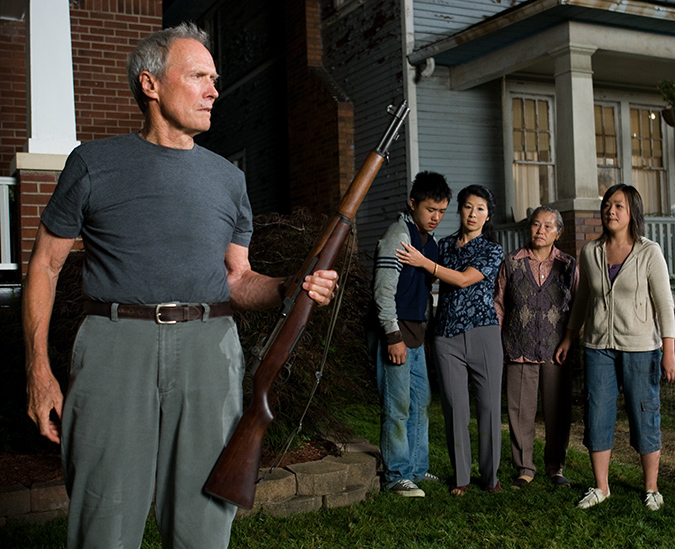 Director Clint Eastwood and director of photography Tom Stern on the set. They have worked together on over a dozen films. 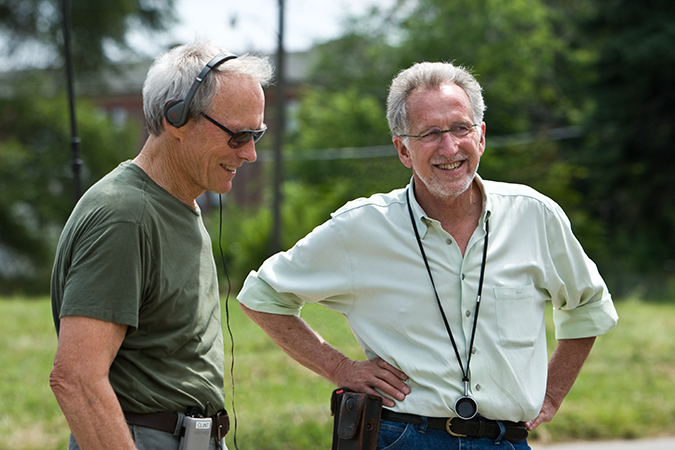 Eastwood and crew prepare a shot with the title vehicle, a 1972 Ford Gran Torino. 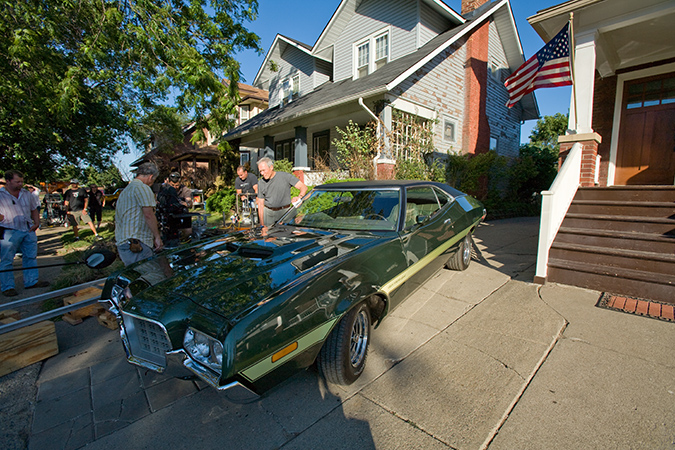