Eighty years ago this month, on January 13, 1939, a party was held on Stage 5 (now Stage 15) at Warner Bros. Studios in Burbank, California. The “Gay Lady Saloon” set from Warner’s Technicolor western spectacular Dodge City was still in use, having been dressed with additional props to celebrate that day’s Friday the 13th, and to poke fun at various other superstitions. Here is a selection of photos from that gathering, the original negatives of which were recently found deep in the WB archives.

Actors Henry O’Neill and Alan Hale (both in their Dodge City costumes), director Michael Curtiz, and Errol Flynn cross their fingers while walking under a ladder. 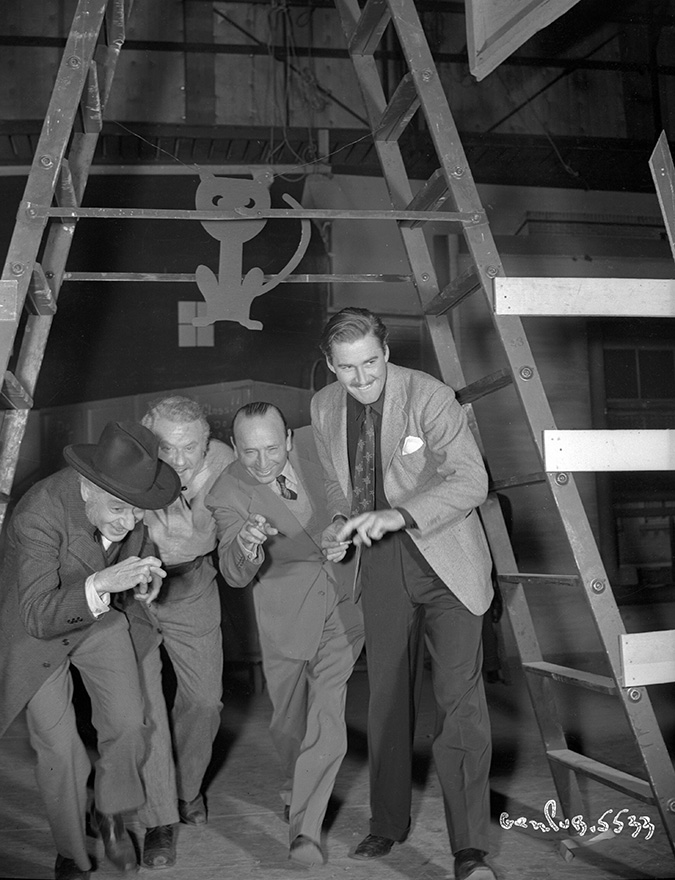 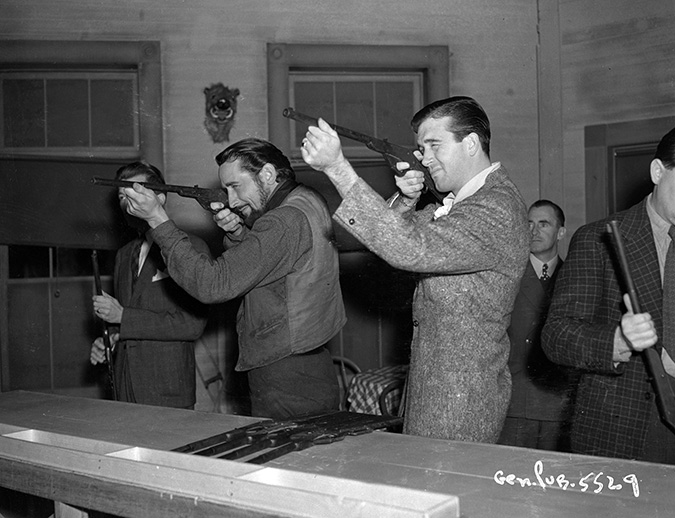 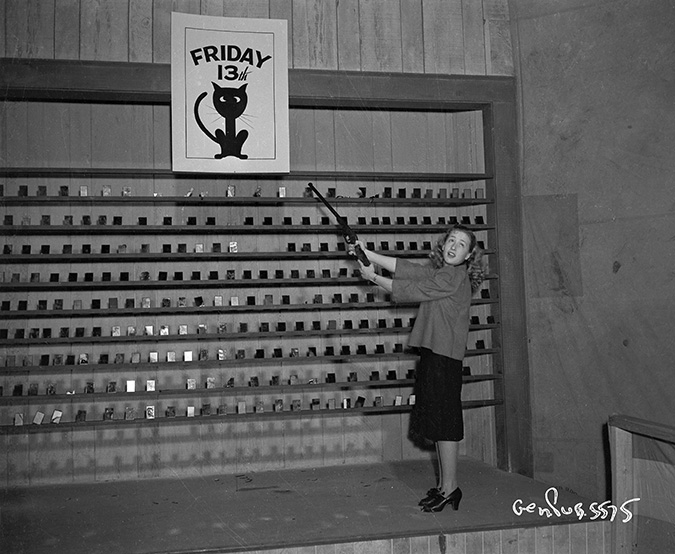 Former FBI agent Leon G. Turrou also takes aim at the mirrors. Turrou was the lead investigator into a Nazi spy ring operating in the United States, and wrote a series of articles about the investigation. It was these articles that formed the basis for the first explicitly anti-Nazi movie made by a Hollywood studio, Confessions of a Nazi Spy, which Warner Bros. would release later in 1939. 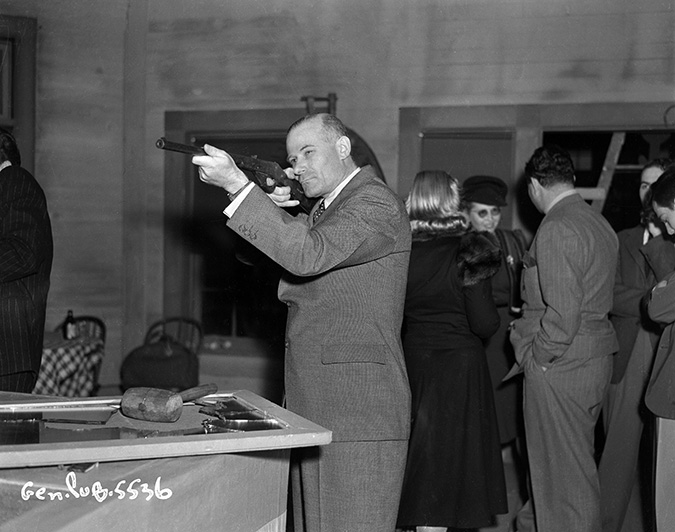 Errol Flynn and Olivia de Havilland pick up their $2 bills. Dodge City was the fifth of eight movies the pair appeared in together between 1935 and 1941. 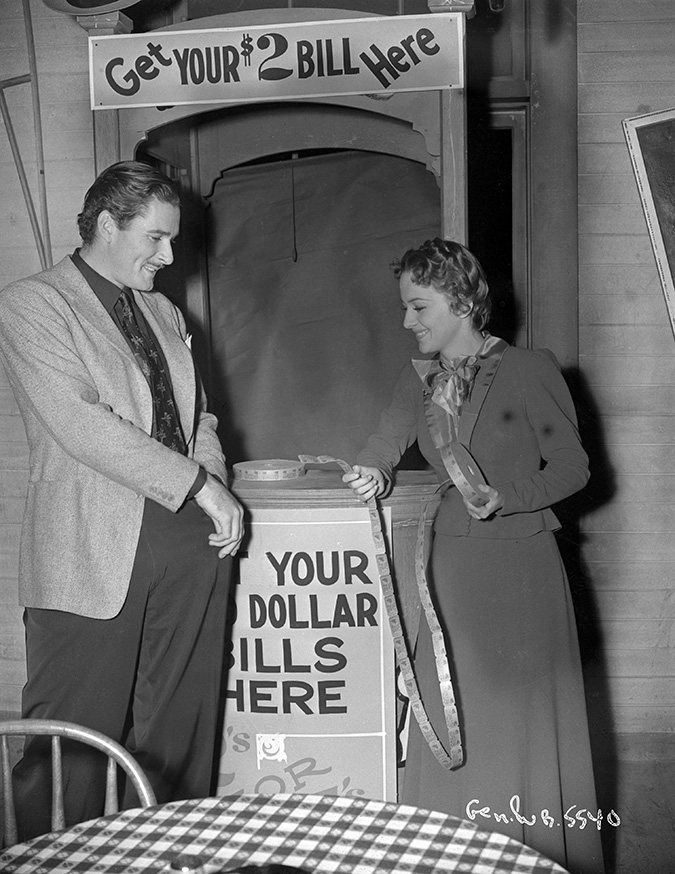 Rosemary Lane, Errol Flynn, and Priscilla Lane are interviewed by NBC radio. These Lane sisters, along with their older sister Lola, were just coming off the success of Four Daughters, which was a major hit in late 1938, and soon-to-be Oscar nominee for Best Picture. 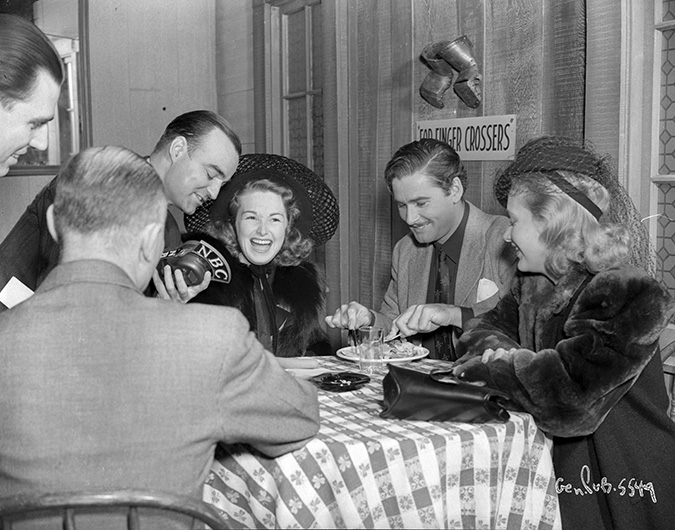 Reporters talk to John Garfield while director Michael Curtiz looks on. At this time, Curtiz was directing Garfield in Daughters Courageous, a spiritual sequel to Four Daughters, which had earned Garfield an Academy Award nomination for Best Supporting Actor in his first-ever movie. Curtiz had a busy 1939, directing four features and the Oscar-winning short Sons of Liberty for Warner Bros. 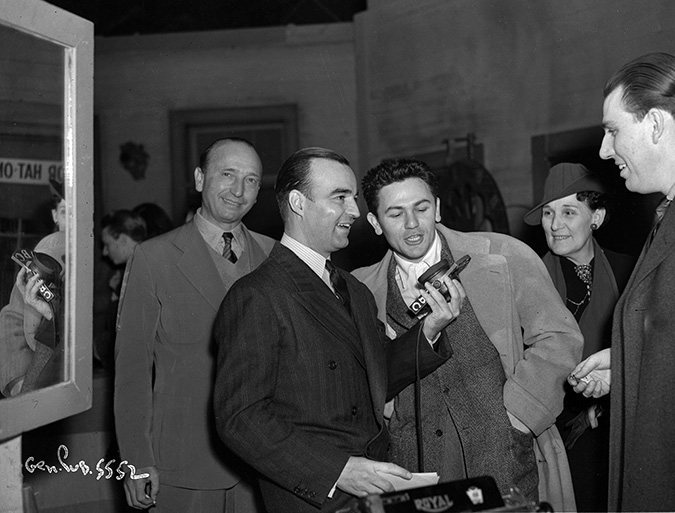 John Payne is taken aback by the Friday the 13th décor. Payne appeared in three features and one short for WB in 1939, but is probably best known for his leading role in 1947’s Miracle on 34th Street. 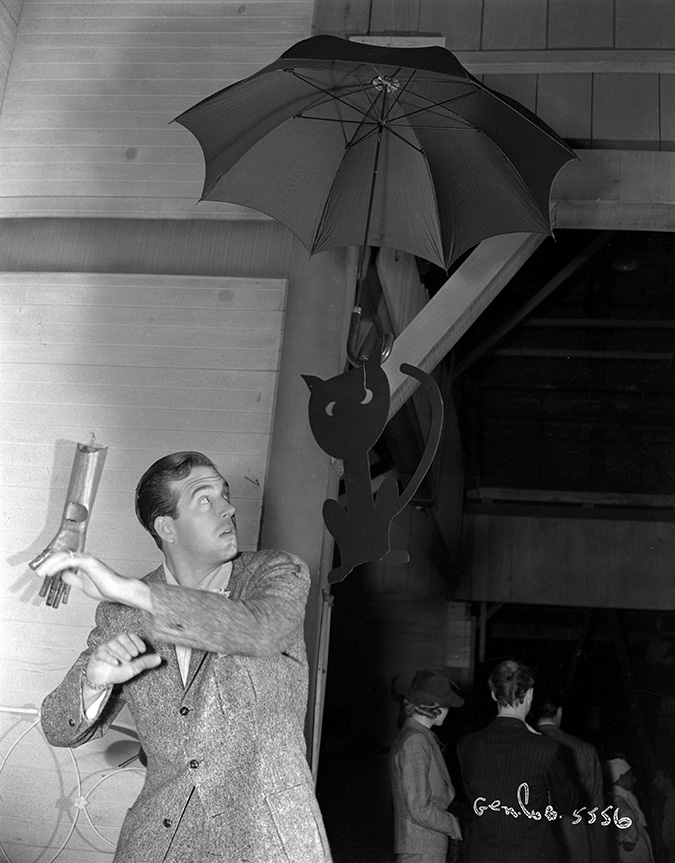 An overhead view of the Dodge City saloon set, fully catered for the party. 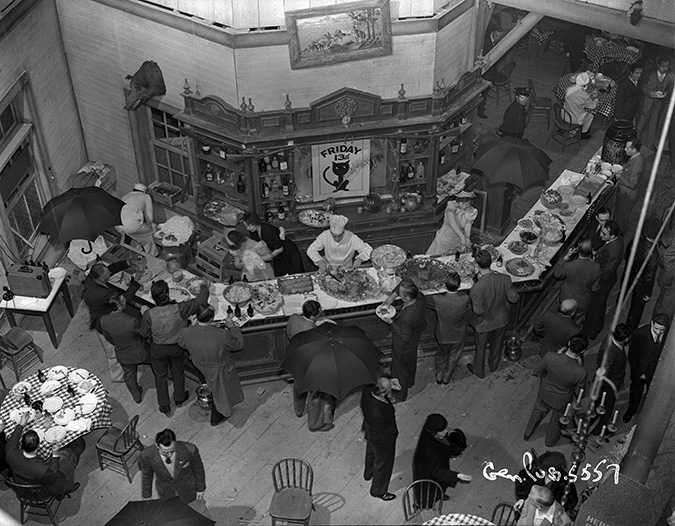 Jack Warner and Olivia de Havilland risk standing under both a black cat and an open umbrella. 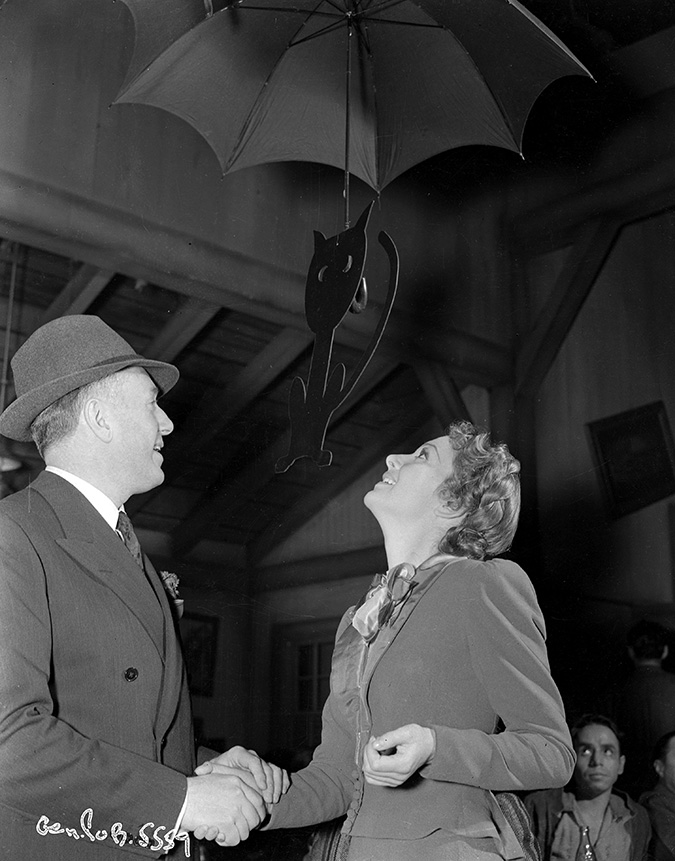 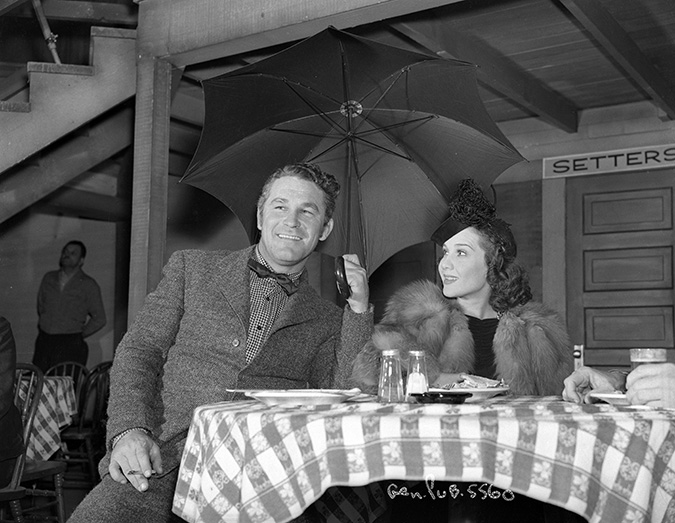 Actress Priscilla Lane hopes crossed fingers will protect her from the bad luck caused by a “Hat-on-the-bed.” 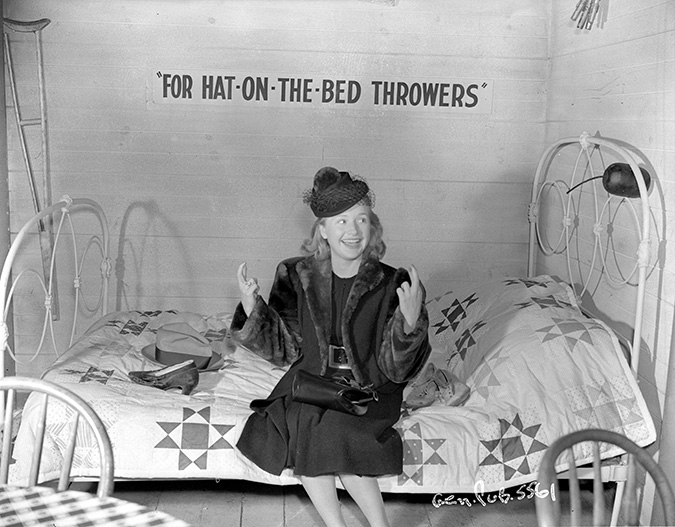 Bonita Granville sits atop an actual live donkey! Granville was in the midst of starring in four Nancy Drew pictures for Warner Bros. at this time. 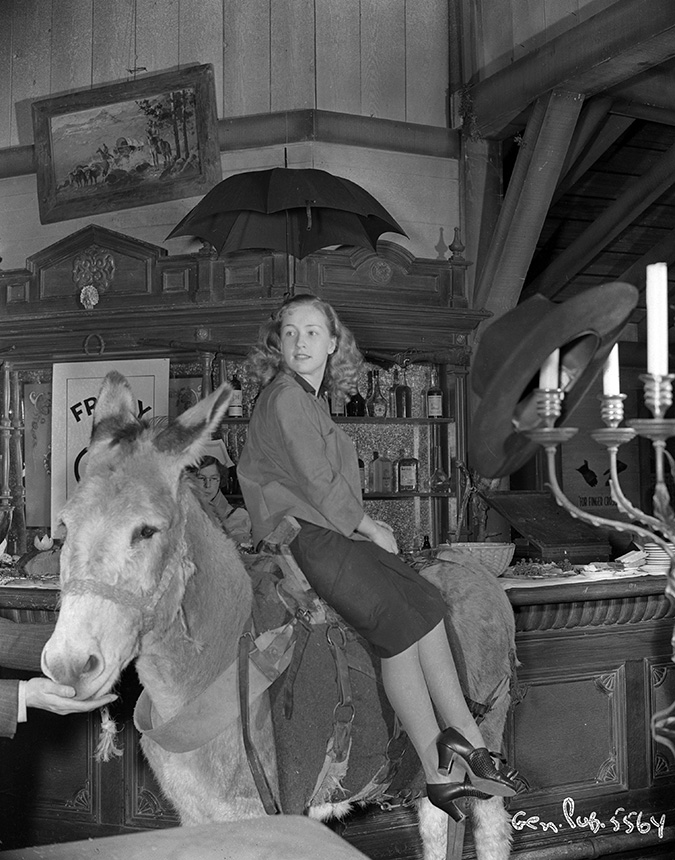 A jovial-as-ever Jack Warner reveals the coffin’s contents, much to Bonita Granville’s surprise, while actress Margaret Lindsay looks on. 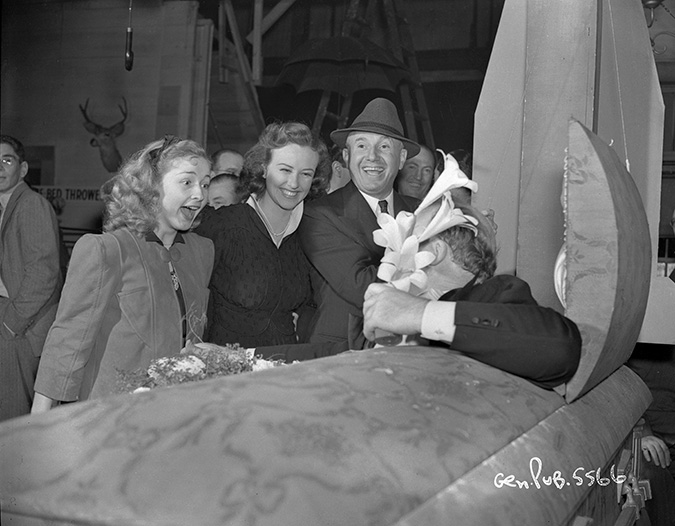 Even the bathrooms held surprises on this Friday the 13th! 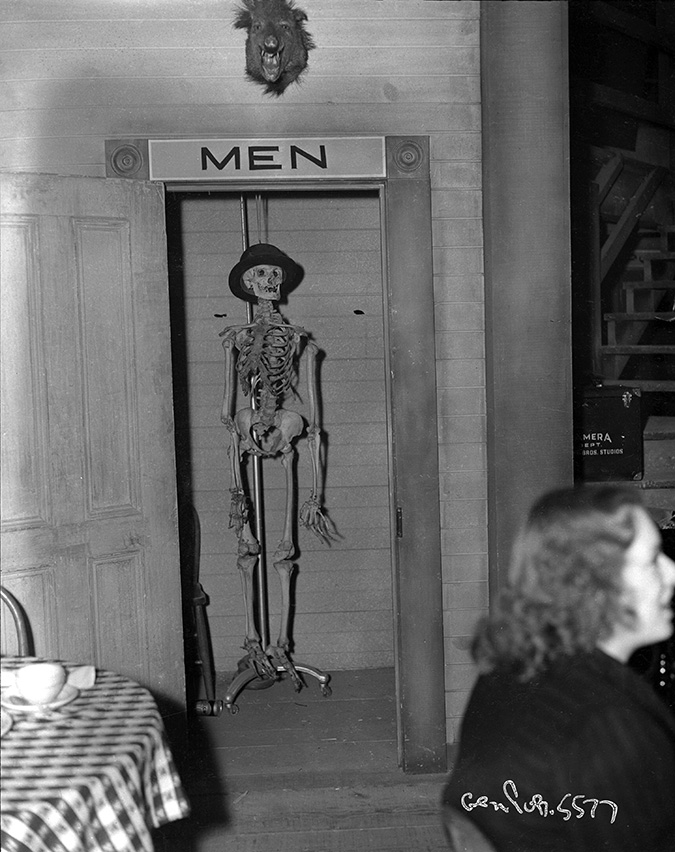 A wonderful photograph of two screen legends: Olivia de Havilland and her sister, actress Joan Fontaine. Later that month, after finishing Dodge City, Olivia would temporarily leave Warner Bros. for Selznick Studios and the filming of Gone with the Wind. Joan would return to Warner Bros. in 1943 to make The Constant Nymph. 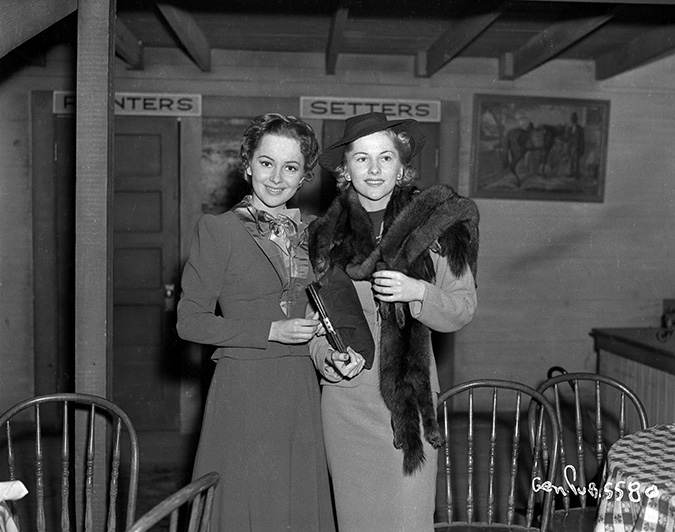