Just when the citizens of Bricksburg thought it was safe to relax, their treasured city is under attack and needs its group of heroes to rise up once more and save the day. With LEGO® DUPLO® space invaders causing mayhem and destroying Bricksburg quicker than it can be rebuilt, things look perilous until Emmet (Chris Pratt), Lucy (Elizabeth Banks), Batman (Will Arnett) and a host of supporting characters all come together to restore peace to the city. Will the heroes be brave enough to travel to new and unexplored worlds? Are their building skills good enough to save Bricksburg? There’s only one way to find out - watch this action-packed sequel, Lego Movie 2: The Second Part, in theaters nationwide February 8. 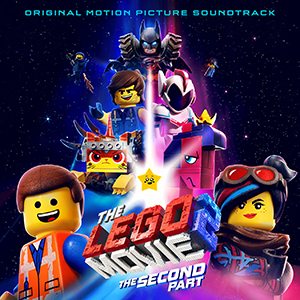 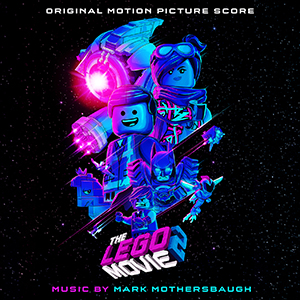 Both a soundtrack album and a score album will be released on February 7, the day before the film comes to theaters nationwide.

​The new music featured on the soundtrack collection includes the end title song “Super Cool,” from Beck feat. Robyn & The Lonely Island, the infectious “Catchy Song” by Dillon Francis feat. T- Pain & That Girl Lay Lay and two songs performed in the film by Tiffany Haddish – the solo “Not Evil” and a hilarious duet with Will Arnett entitled “Gotham City Guys.” Stephanie Beatriz performs on two songs - the solo “5:15” and, as part of a LEGO cast performance, one of the two reimagined versions of “Everything is Awesome” featured on the soundtrack. The second version of the song, titled “Everything Is Awesome (Tween Dream Remix),” is offered by comedy twosome Garfunkel & Oates. “Come Together Now” is performed by indie dance duo Matt & Kim; Yossi Guetta, Esther Guetta & Fiora Cutler perform “Welcome to the Systar System”; and Superoraganism rounds out the album with “Hello Me and You.”

Five of the songs on the soundtrack were written by Canadian comedian Jon LaJoie.

Do you have what it takes to get your heroes to safety? Or will you meet the Queens needs in this shape shifting extravaganza…

General Mayhem Attacks Game
Play as Emmet, Lucy, Benny and Unikitty in this fast paced, scrolling, target shooting game. Manage all 4 heroes, moving from cover to cover through the streets of Apocalypseburg. Watch out for attacks from General Mayhem!

Final goal is to get all of our four heroes to safety! 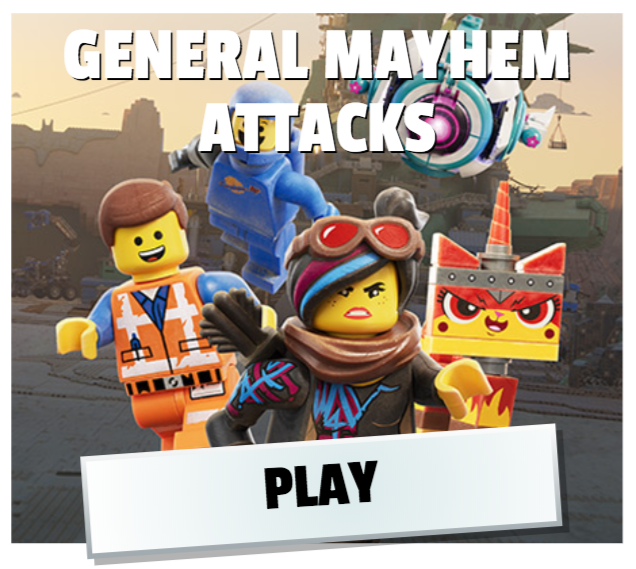 Queen Watevra Wa'Nabi Match Game
Join Queen Watevra in the Systar System, matching up the pieces she needs to prepare for the secret ritual.

The goal of the game is to make as many matches as you can before time runs out, and gain stars by collecting as many of the three types the Queen needs on each level. 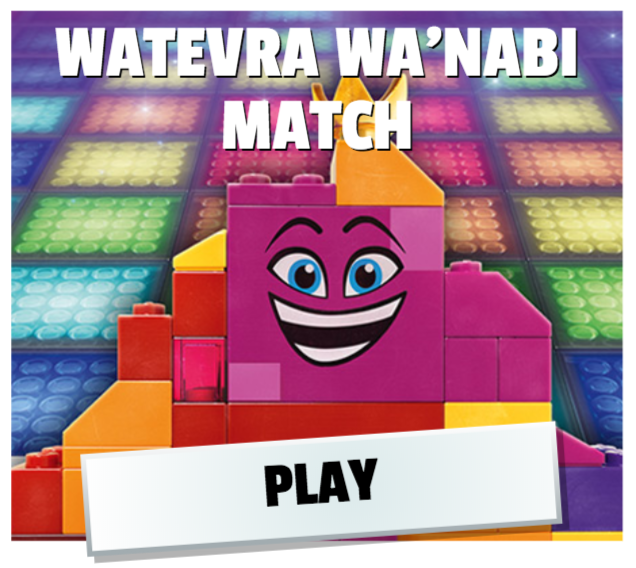 The alien monster invaders have left Bricksburg in ruins. It is now up to Emmet and a host of heroic characters to go beyond their world and save their friends from the strange inhabitants of the Systar System. Players can journey into outer space, discover new worlds, and test their Master Building skills. 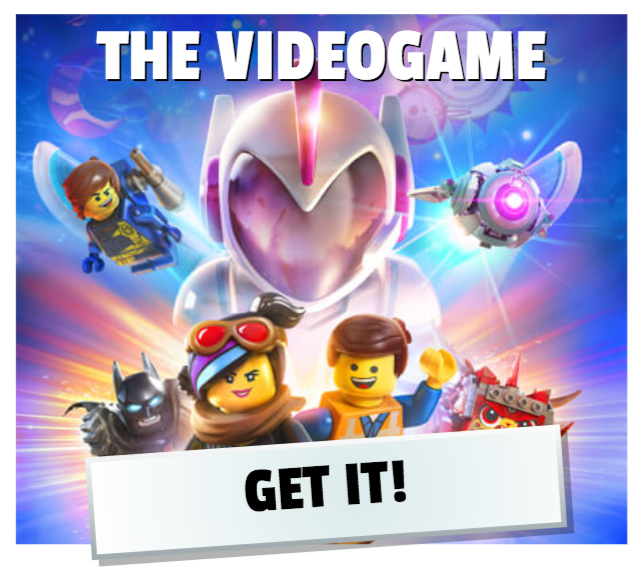 Unlock and play as over 100 playable characters from The Lego Movie 2: The Second Part and the first film and discover new worlds!

Inspired by the film, the new LEGO sets will send master builders of all ages on an epic building journey to go where no brick has gone before!

For more information about these toy sets and more, visit https://www.lego.com/en-us/themes/the-lego-movie-2/build-more-movie-2.

Go where no brick has gone before! Starting January 29, for a limited time, fans of all ages can experience the fun, action and laughs early by immersing themselves in a unique interactive world at The LEGO Space Hollywood, at the corner of Vine Street and Hollywood Boulevard in Hollywood, California.

The 6,000-square-foot, fully enclosed, one-of-a-kind space will feature 40 minutes’ worth of interactive adventures, surprises and photo ops inspired by scenes and characters from the new film. Visitors can actually make themselves at home inside Emmet’s brick-built house; explore the surrounding terrain of the newly named Apocalypseburg, formerly known as  Bricksburg; and discover far-away planets in the story’s strange and surprising Systar System. Join Emmet, Lucy (aka Wyldstyle) and their friends as they battle the mysterious new character, General Mayhem, and look though Lucy’s special binoculars for a glimpse of what’s in store on the big screen.

Everything is awesome inside The LEGO Space Hollywood, where guests can  also dance on spinning turntables, build their own LEGO creations, pose alongside their favorite characters like Unikitty and LEGO Batman, and step inside a giant DUPLO® heart confetti booth for extra-fun action photos.

Admission is free. The LEGO Space Hollywood will be open from Tuesday, January 29, through Sunday, February 10, at the hours listed below.

For ticketing and additional information, visit www.TheLEGOSpaceHollywood.com.  See you in the Systar System!

LEGO, DUPLO, the LEGO logo, the minifigure and the brick and knob configuration are trademarks of The LEGO Group. ©2018 The LEGO Group. Used with permission. All rights reserved. BATMAN is trademark of and © DC Comics.