It's "Warner Wednesday" and our film of the day is the 1993 suspense-thriller The Fugitive. 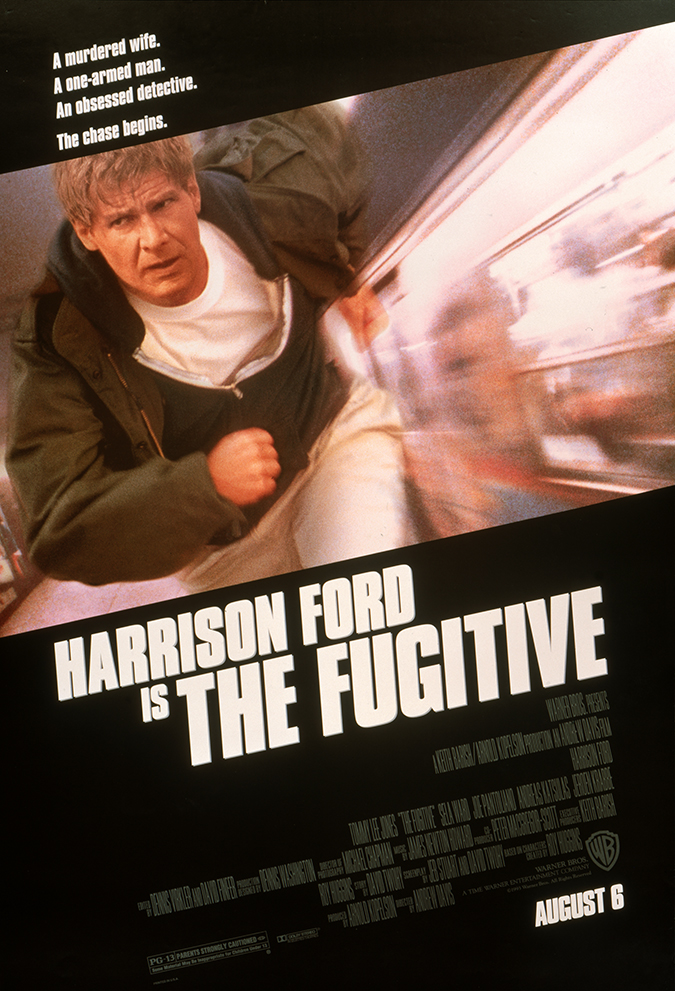 Based on the 60s TV show created by Roy Huggins, the film follows Dr. Richard Kimble (Harrison Ford), who, after being wrongfully convicted of his wife’s murder and sentenced to death, is freed in a freak bus/train collision and must go on a quest to find his wife’s one-armed killer to clear his name. Throughout his journey, he is relentlessly pursued by a team of U.S. Marshals led by Samuel Gerard (Tommy Lee Jones).

Producer Arnold Kopelson had been developing the script for 5 1/2 years and worked with 9 writers on over 25 drafts before he felt he had a solid-enough script to approach talent. Once Harrison Ford agreed to play Dr. Richard Kimble the film was a “go”. David Twohy and Jeb Stuart’s script would evolve over the length of the production, with the creative input from Ford, Kopelson and Director Andrew Davis.

Director Andrew Davis was celebrating the premiere of Under Siege when he was first approached by Kopelson with the project. Davis agreed to direct and decided to cast Tommy Lee Jones, whom he had just worked with on Under Siege, in the pivotal role of U.S. Marshal Samuel Gerard.

Ford’s performance as Kimble is the heart of the film’s success. Ford worked with Davis to craft situations in the film that would display the character’s humanity, so that the audience would be fully sympathetic to his plight.

Jones’s performance resonated with audiences too. He was allowed to improvise a number of his lines that became key moments of the film. For his portrayal as Gerard, Jones would go on to win the Academy Award for “Best Actor in a Supporting Role”.

The story was heavily influenced by Victor Hugo’s Les Miserables and the suspense films of Alfred Hitchcock like North by Northwest. Davis would return to the suspense-thriller genre in 1998, working again with Producer Arnold Kopelson on A Perfect Murder— a remake of Alfred Hitchcock’s 1954 classic Dial M for Murder.

For the film’s bus/train wreck sequence, the producers searched over 5 states for a private railroad track that could be modified to add production controls for staging the cataclysmic collision that sets Kimble free. With only one chance at filming the wreck, Davis had 13 cameras set up to capture the action. It turned out to be the signature sequence of the film.

From the moment Gerard and the U.S. Marshals step on the scene and start their pursuit, the film’s pace becomes unrelenting — Kimble never seems to get a moment to catch his breath until the end credits roll.

The Fugitive was a massive success, becoming the third highest grossing movie in Warner Bros. history at the time.

The success would lead to a sequel, U.S. Marshals (1998), where Jones and his team would return to hunt down another wrongly-accused murderer played by Wesley Snipes. The film would also be parodied in 1998’s Wrongfully Accused, starring Leslie Nielsen.

WHAT TO LISTEN FOR: James Newton Howard’s jazzy score.