One of the most beloved movies of all time, The Wizard of Oz, turns 80 this year. To celebrate, here are some rather interesting historic images that highlight the production and publicity of this timeless classic. To start, here is one of the film’s original one-sheet posters, featuring drawings by legendary artist Al Hirschfeld. 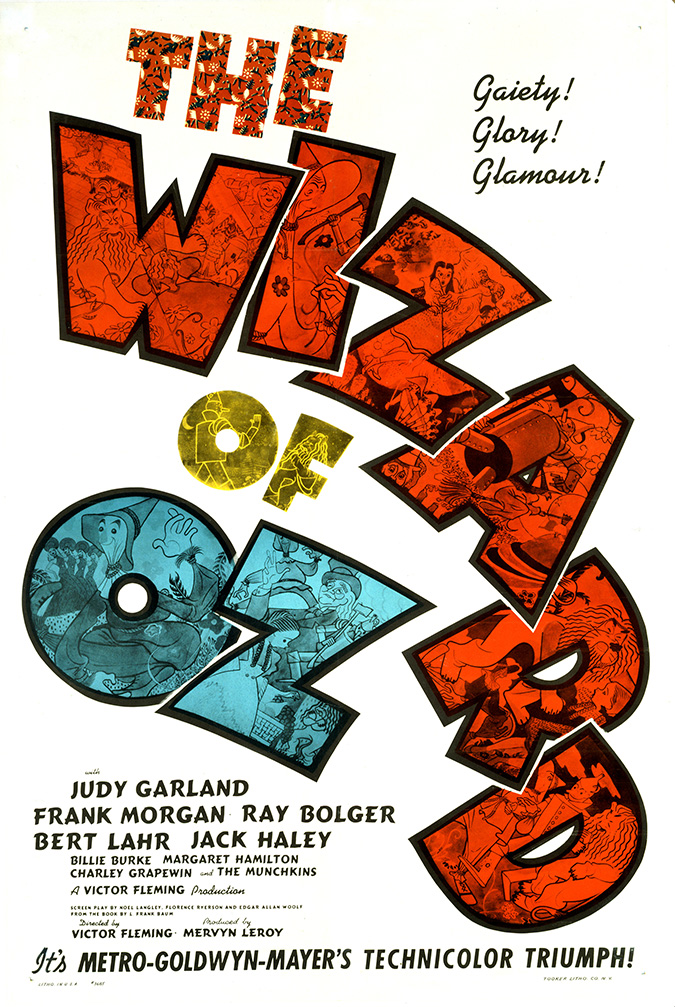 An early makeup test photo of Ray Bolger as the Scarecrow, showing a dramatically different look than seen in the finished movie. 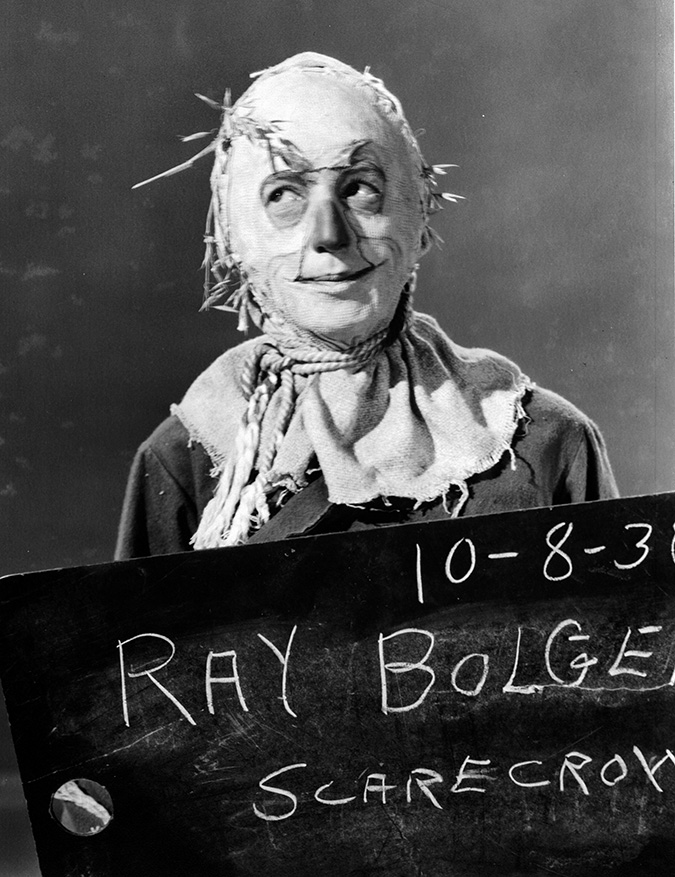 The Wizard of Oz began filming on October 13, 1938 under the direction of Richard Thorpe, but he left the production after less than two weeks. Although all of Thorpe’s footage was reshot and none of it appeared in the final film, some publicity stills taken during this period still exist. Note the different hair and makeup on Margaret Hamilton as the Wicked Witch, and the differently styled blond hair of Judy Garland as Dorothy! 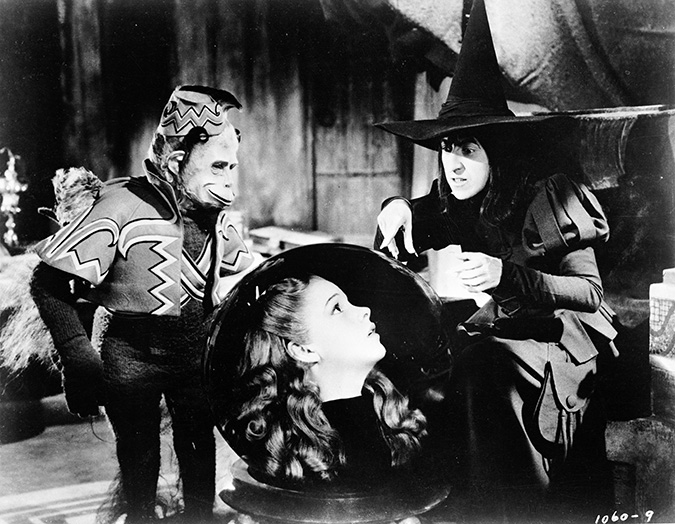 Immediately after the departure of Thorpe, MGM stalwart George Cukor came aboard the project for a brief period. Although he did not shoot any footage, he made some key changes to the appearance of several characters, the most important of which was Dorothy. This wardrobe test photo shows Judy Garland’s hair back to its natural color, wearing simpler makeup, and a different dress much closer to the one ultimately chosen. Fifteen years later, Cukor and Garland would reunite at Warner Bros. for A Star Is Born. 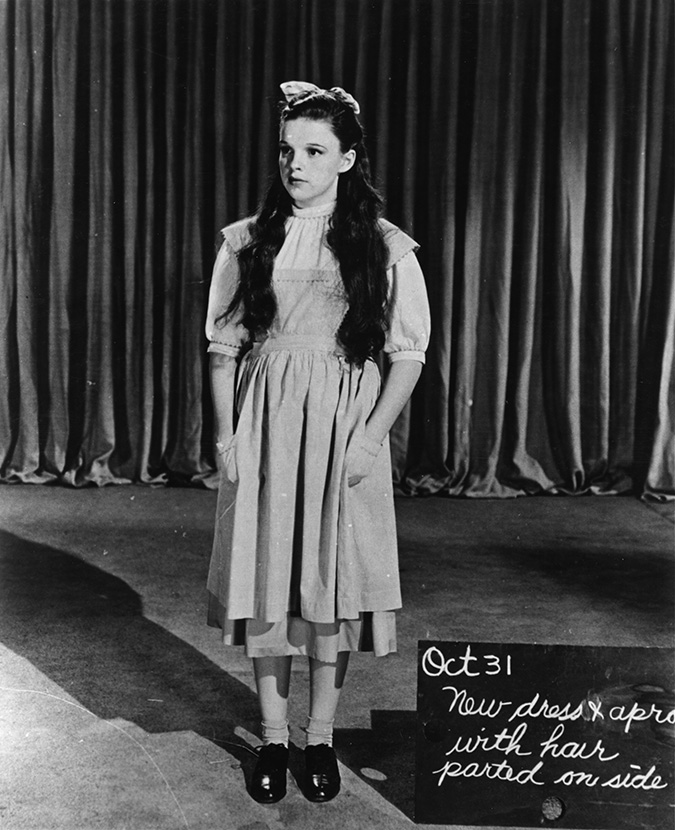 In New York City, some of the actors who will portray the Munchkins sit aboard a bus bound for MGM Studios in California. 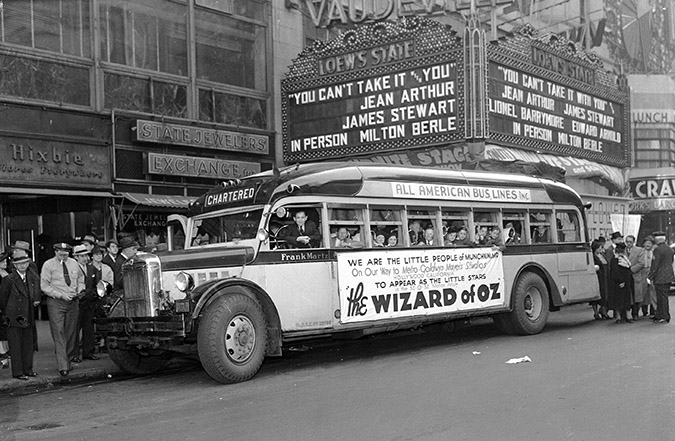 Victor Fleming was ultimately chosen as the director of The Wizard of Oz. One of MGM’s most reliable directors, here he can be seen directing one of the apple trees that prove so hostile to Dorothy, Toto, and the Scarecrow. 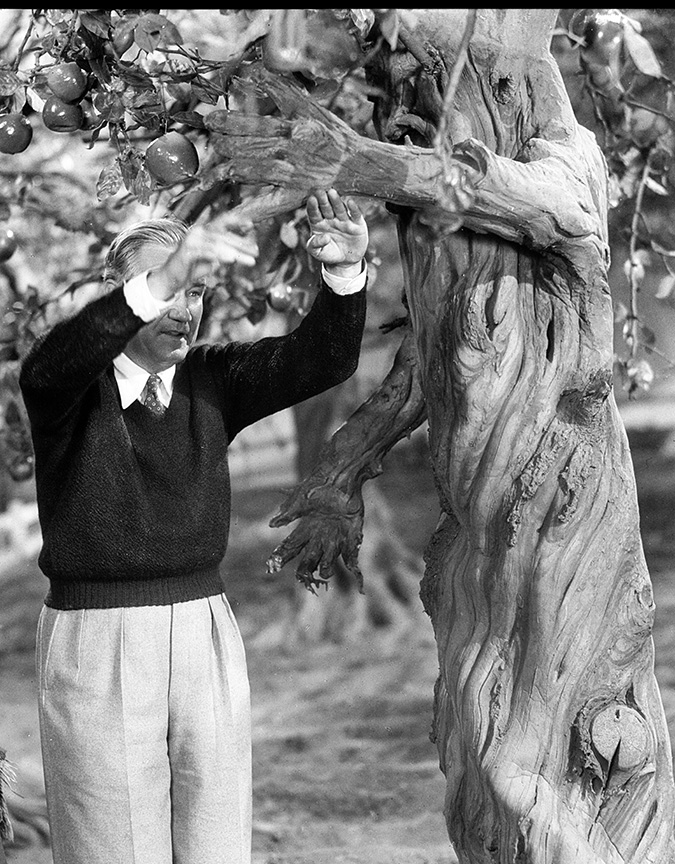 In February 1939, it was announced that Victor Fleming would be leaving The Wizard of Oz to take over the direction of another troubled production, Gone with the Wind. Director King Vidor, who had helmed such previous MGM classics as The Big Parade, The Crowd, and The Champ, came in to finish the film in its final weeks. Vidor is seen here on the set of 1938’s Best Picture Oscar nominee The Citadel. 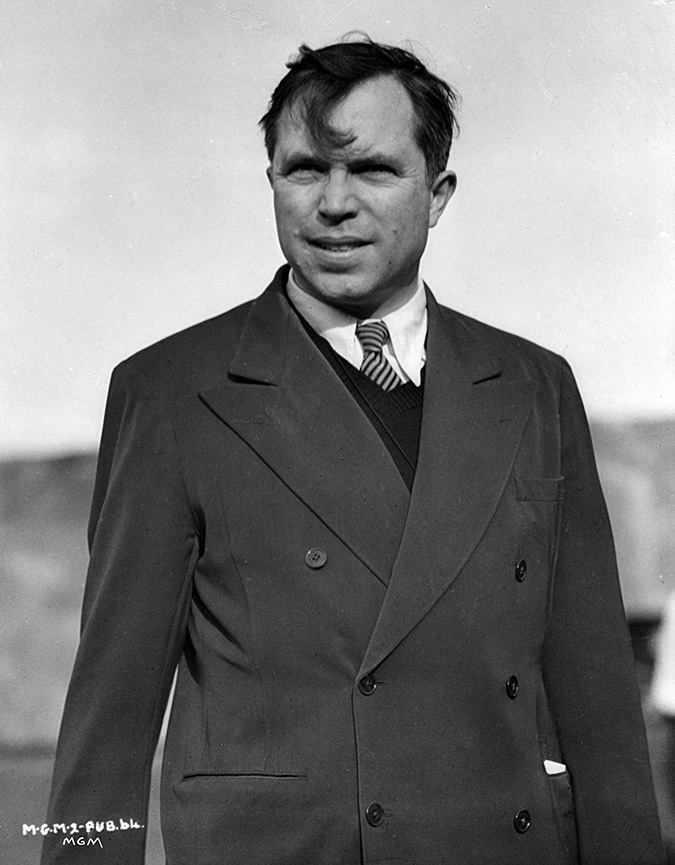 Vidor’s work on the movie included most of the Kansas footage that bookends the film, and possibly some Technicolor pick-up footage. Most importantly, he helmed perhaps the most famous song ever put on celluloid, Judy Garland’s rendition of “Over the Rainbow.” 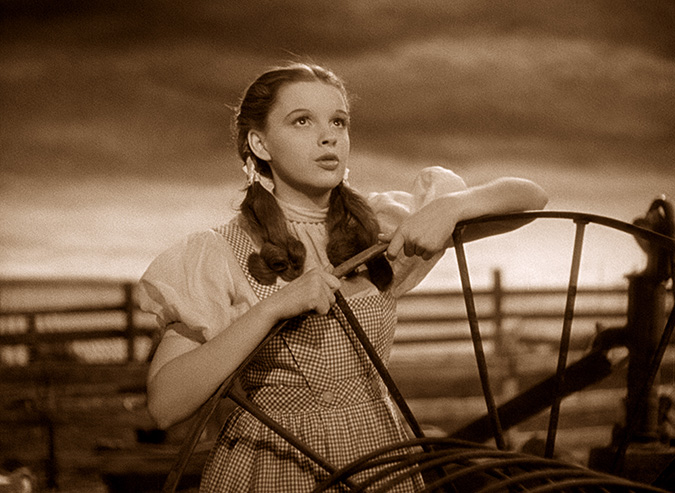 Judy Garland, wearing a dress designed by The Wizard of Oz costume designer Adrian, stands in front of the flower shop opened by her mother (with some likely help from the MGM publicity department) on Wilshire Blvd. in Los Angeles. 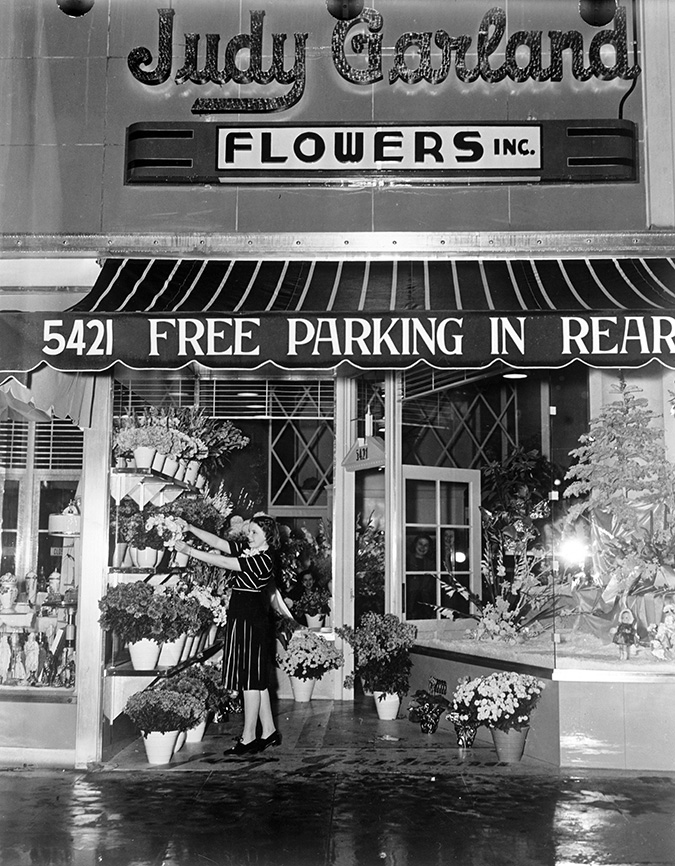 Mickey Rooney and Judy Garland board a train in Pasadena, CA to take them to a series of promotional appearances on the East Coast. 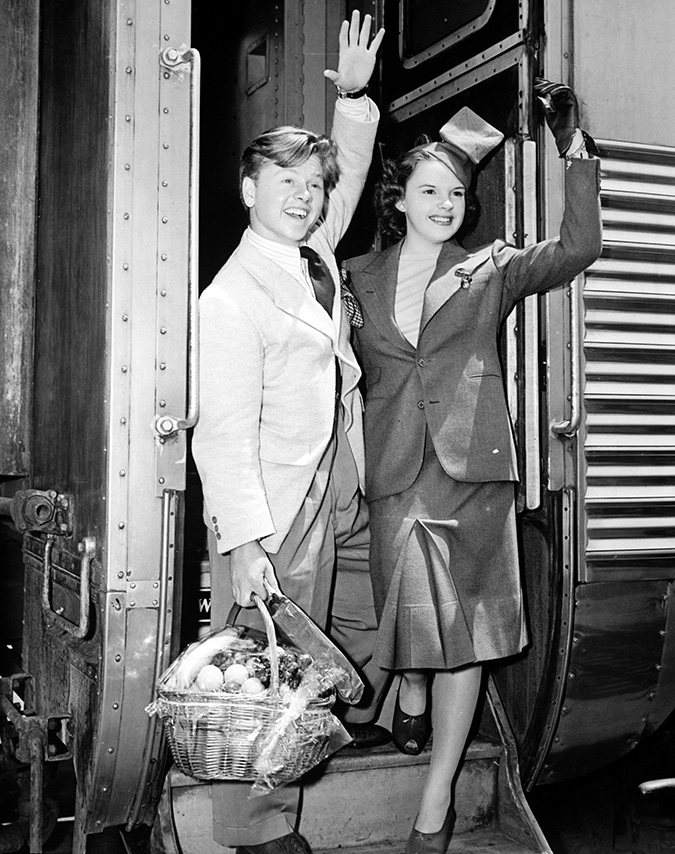 The Capitol Theater in New York decked out for the opening of The Wizard of Oz with a live pre-show from Rooney and Garland on August 17, 1939.

After so many monochromatic images above, it’s best to remember that a great part of the legacy of The Wizard of Oz comes from its stunning three-strip Technicolor photography. On that note, here’s a full color image (taken from the 4K restoration) of some of the most enduring characters in Hollywood history 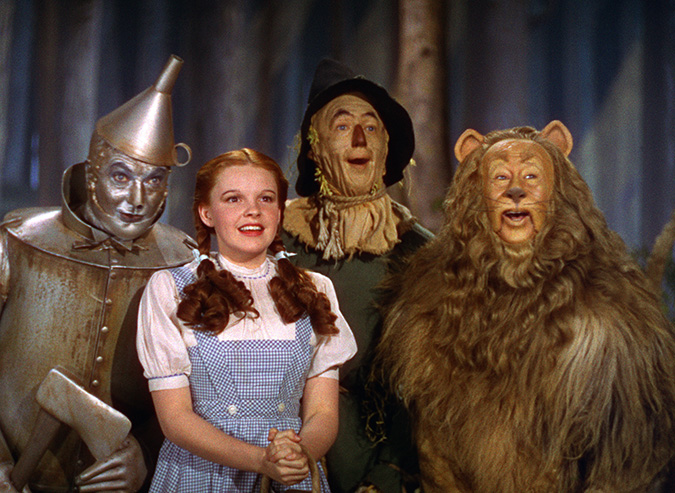