One of the funniest and most successful comedies of all time, Blazing Saddles, was released to theaters 45 years ago this week. Directed by Mel Brooks, who also co-wrote the screenplay with Andrew Bergman, Richard Pryor, Norman Steinberg, and Alan Uger, it’s both a hilarious and pointed satire on race and a loving parody of Hollywood Westerns.  Perfectly cast down to the smallest role, it was the #1 box office hit of 1974, and if ticket price inflation is considered, it’s surpassed only by The Exorcist and The Dark Knight as the biggest movie in Warner Bros. history!  Following this original one-sheet poster are some production and behind-the-scenes stills from the WB archives. 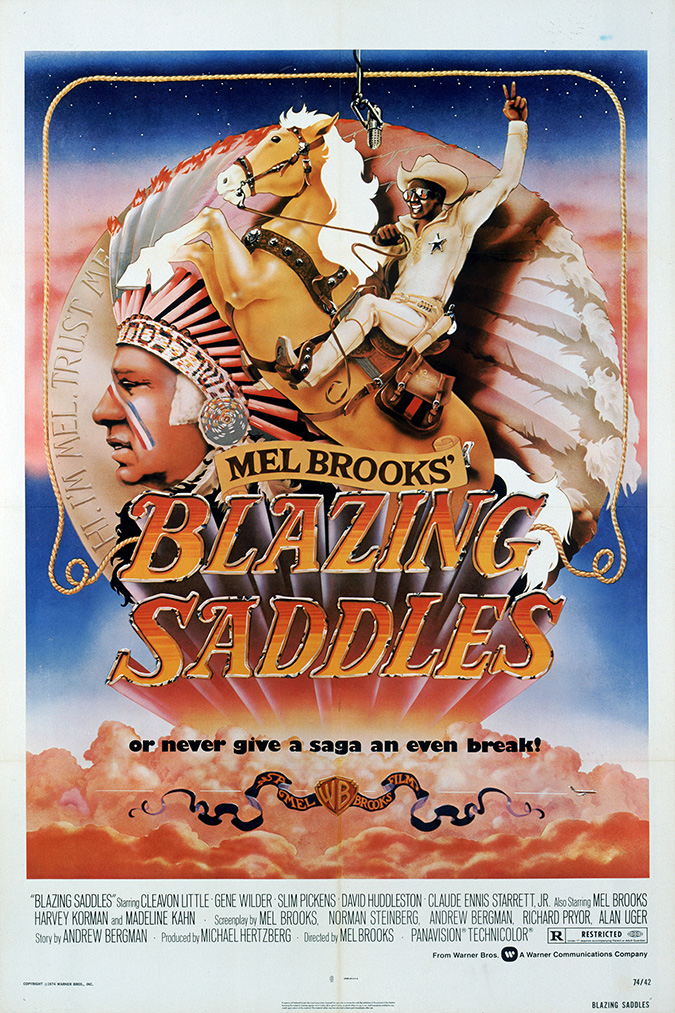 Cleavon Little stars as Bart, whose appointment as Sheriff of the small western town of Rock Ridge sets the plot in motion. Little is seen here with his trusted palomino just off the set. 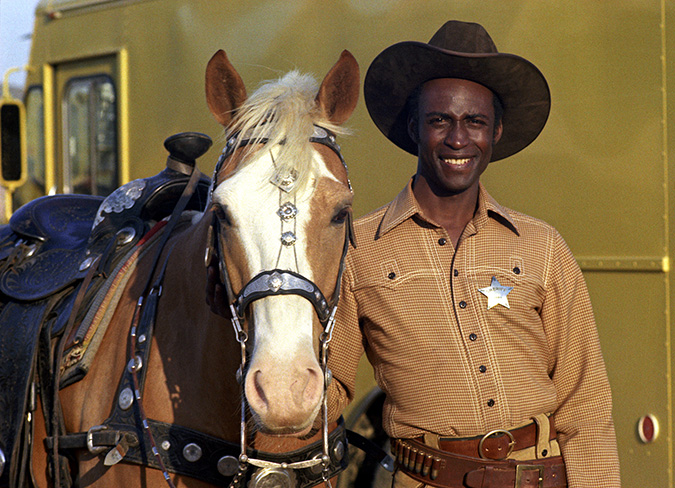 The incomparable Gene Wilder plays Jim, aka the Waco Kid, who soon joins forces with Bart. Wilder and Little’s wonderful chemistry is a huge factor in the movie’s success. 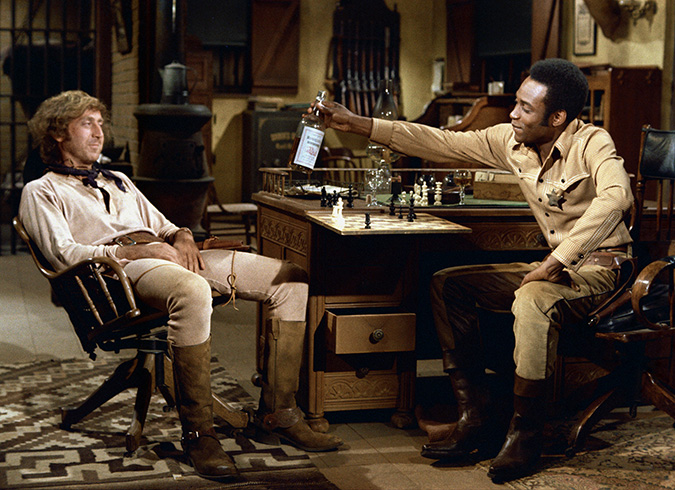 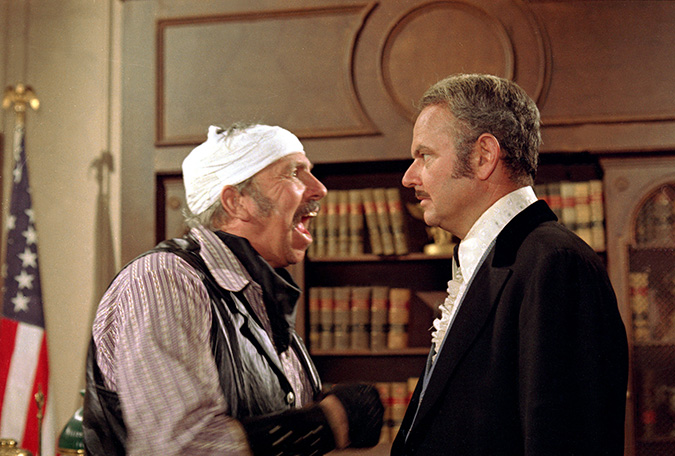 The many anachronisms in Blazing Saddles provide some of its biggest laughs, as seen when Count Basie and His Orchestra provide Sheriff Bart’s music as he rides into Rock Ridge. 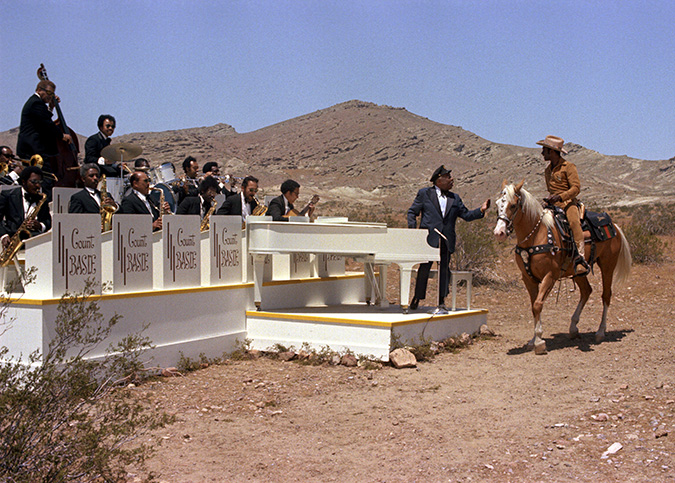 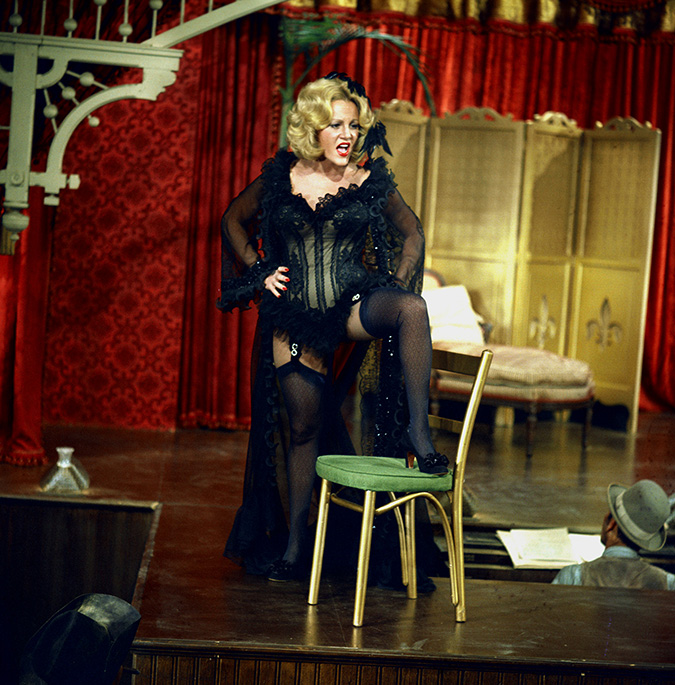 The unforgettable entrance of Alex Karras as Mongo. 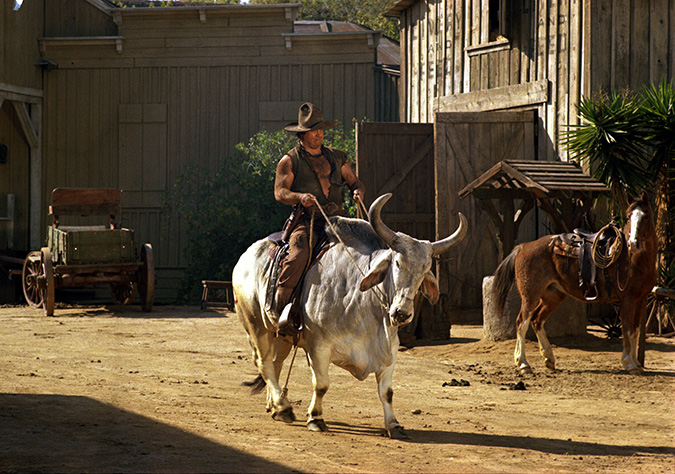 Sheriff Bart dismounts for his final showdown with Hedley Lamarr at the Chinese Theater in Hollywood. Note that the original title for Blazing Saddles, “Black Bart” appears on the theater marquee. The title was optically corrected in the final movie, but a television pilot bearing the original title did air on CBS in 1975. 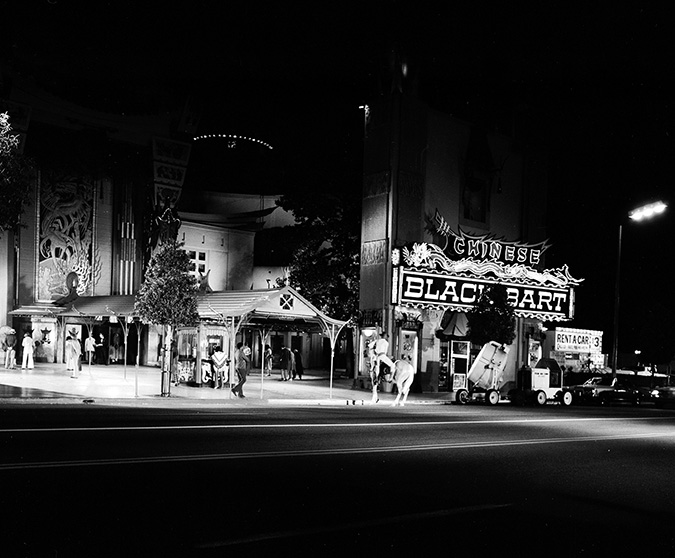 Mel Brooks (center), producer Michael Hertzberg (lower right), and crew film on “Western Street” on the Warner Bros. lot. Many of WB’s early television Westerns, such as Cheyenne and Maverick, as well as countless other movies and TV shows, were also filmed on this set. 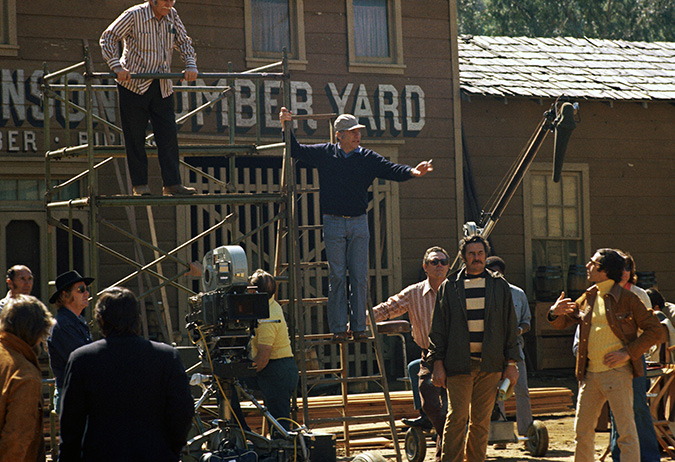 A gorgeous shot of Gene Wilder and director Mel Brooks on the set. Incredibly, these two would re-team for yet another classic comedy in 1974, as Young Frankenstein would be released before the year's end! 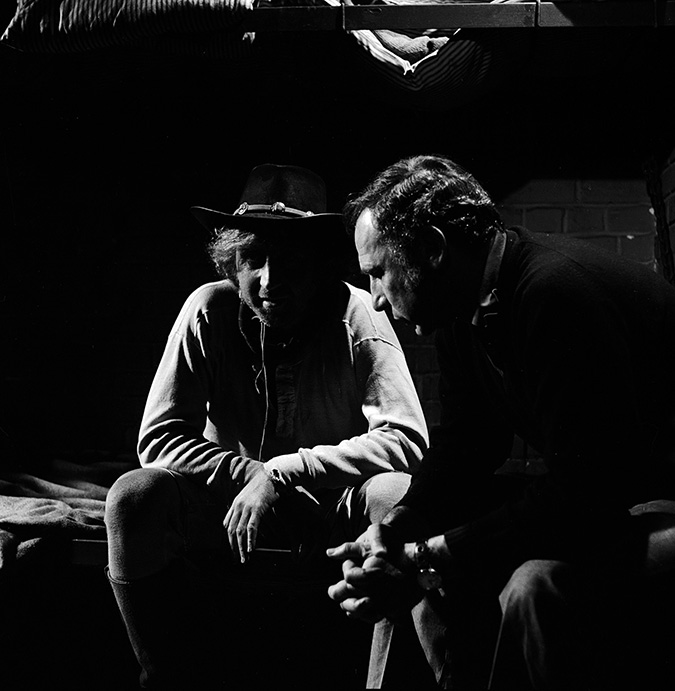 The Warner Bros. Scenic Arts department working on wooden figures of the cast, to be used in the manufactured “decoy” town of Rock Ridge. 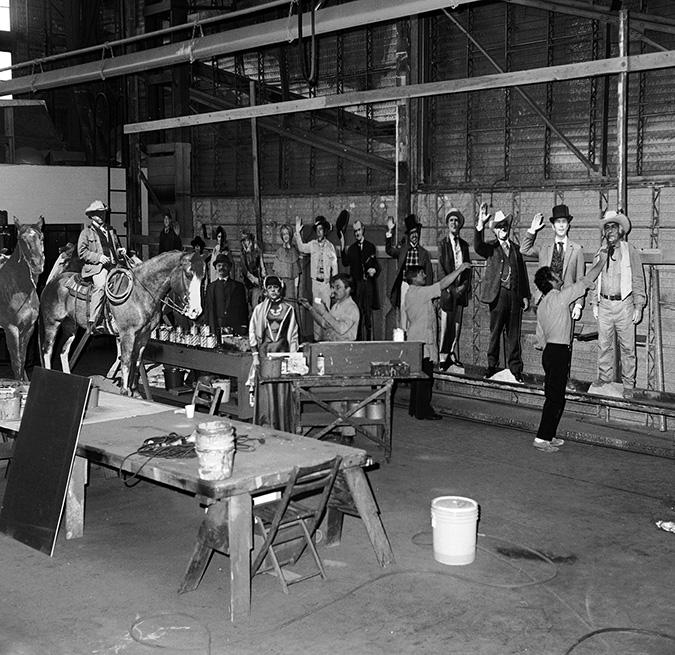 Mel Brooks behind the camera while in costume as Governor Le Petomane, one of two acting roles he played in Blazing Saddles in addition to his writing and directing duties. 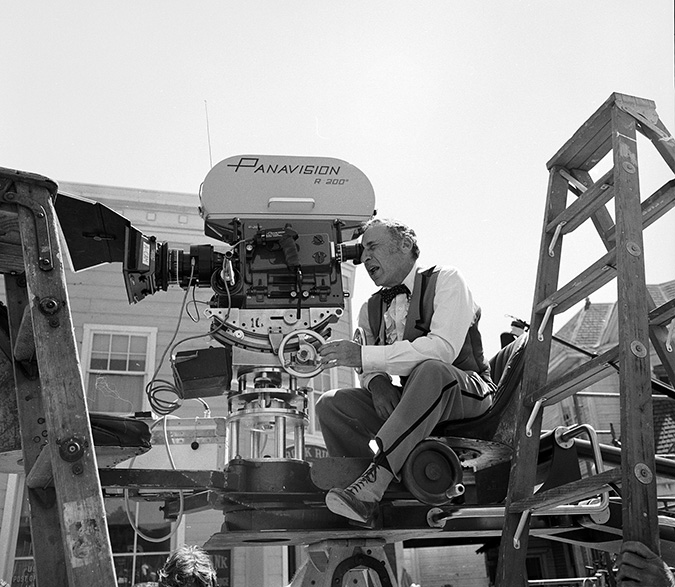 A special preview screening of Blazing Saddles was held at the Pickwick Drive-in Theater in Burbank, just down the street from Warner Bros. Studios, and even closer to the Los Angeles Equestrian Center. Patrons on horseback were treated to free admission and “Horse d’oeuvres” at the “Horsepitality Bar”, as seen in this photograph. 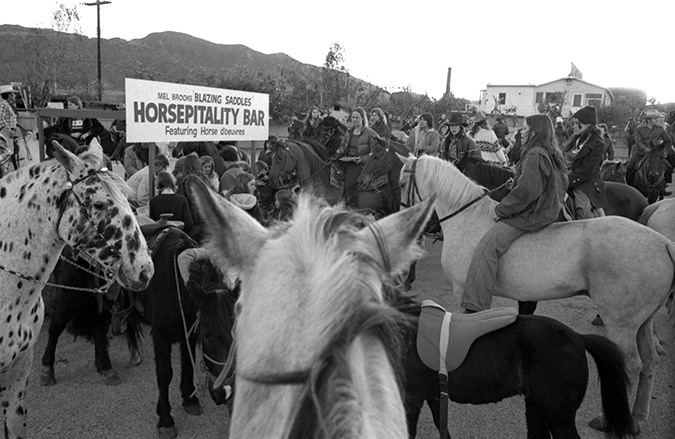 The show begins for the VIP guests. 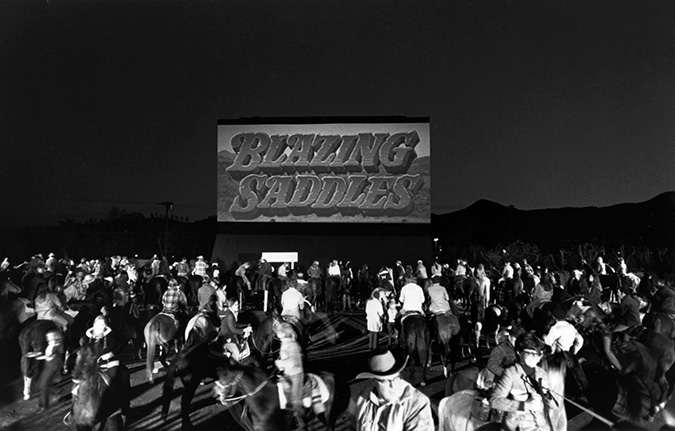 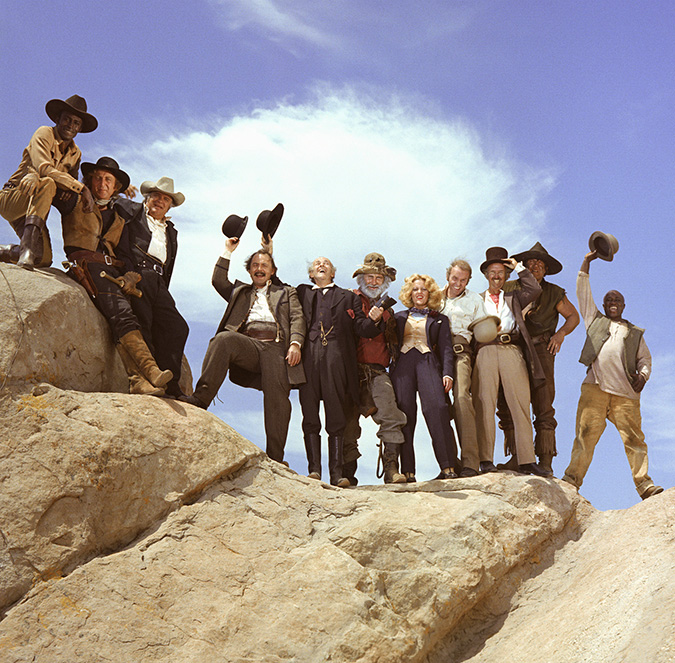