Crime, drama, detective fiction...thrilling and suspenseful - all the emotions evoked as one sits to watch the newly released trailer of Motherless Brooklyn, a film adapted by Jonathan Lethem's 1999 novel of the same name.

Edward Norton directed, wrote, produced and stars in Motherless Brooklyn. Norton aimed to transpose Lethem's contemporary characters into a different period and plot and give it a distinctive atmosphere by re-setting the drama in the 1950s—a time of great change in New York City.

The movie centers around Lionel Essrog (Norton), a lonely private detective with Tourette Syndrome, as he attempts to solve the mystery behind the murder of his mentor and only friend, Frank Minna (Willis).

The movie is a two-decades long project of Norton's, after he was first attached upon the novel's release. Nevertheless, the wait has paid off as many elements are weaved into the movie which make it relatable today, with hints of racial and political tensions, the unravelling of hidden secrets, all while living with a disorder.

LISTEN: MUSIC FROM THE MOTION PICTURE

What's even more evident is how interwoven and key the soundtrack plays along with the movie. We hear 'Daily Battles' about forty seconds into the trailer, a beautiful strain of melody that seems to tug at the thinfelt strain of the relationship between Essrog and Minna.

'Daily Battles' was a collaboration of what Norton calls a "mashup of geniuses." Written by multiple Grammy Award-winning artist Thom Yorke (Radiohead) and performed by himself and his Atoms For Peace bandmate Flea (Red Hot Chili Peppers), as well as a second version of the song arranged and performed by nine-time Grammy Award-wining jazz trumpet icon Wynton Marsalis. Norton said that, "if you’re lucky enough to get to direct your own film, the allure of ringing up people whose work thrills you, well... it's irresistible. And if you're really lucky…it all goes brilliantly, and you make some magic together."

Both versions of 'Daily Battles' are now available to stream and download. 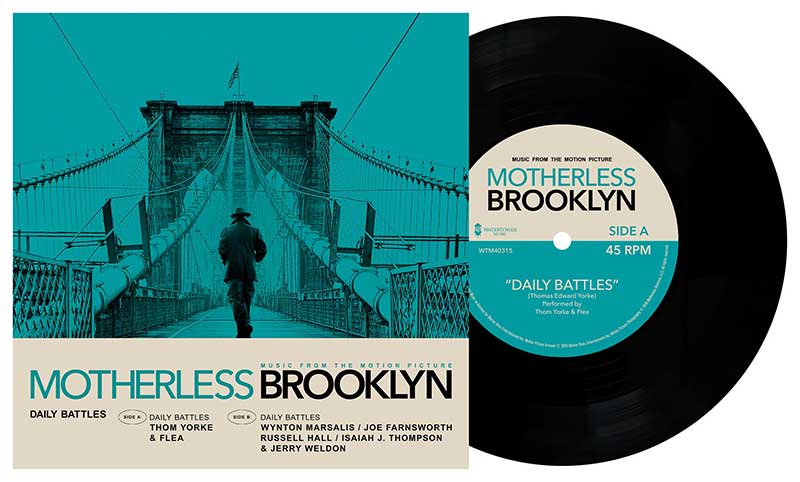 The album and the split 7" vinyl are both now available for pre-order now. The "Motherless Brooklyn: Original Motion Picture Soundtrack" is set to be released October 25, with the full album vinyl available in December. The track list is as follows:

The film's score composer is award-winning Daniel Pemberton (Steve Jobs, All the Money in the World, Ocean's 8) whom Norton proclaims as an "exuberantly protean talent." Norton goes on to say, "he wrote what I'll declare one of the best film scores of the last decade and within it two pieces that all the players who recorded them called 'straight up classics.'" Pemberton's 10-track "Motherless Brooklyn: Original Motion Picture Score" will have its own album release close to the date the film is in theaters, November 1.