Our favorite season of the year is approaching: Fall.

To prepare for the cooler months, we’ve created a list of movies to keep an eye out for. Celebrate your holidays with your favorite actors and immerse yourself into a whole new experience of fresh theater releases.

What are you ready for? Get cozy, or dress up, and invite your family/friends along to a relaxing and fun movie experience.

Evil resurfaces in Derry as director Andy Muschietti reunites the Losers Club in a return to where it all began with IT Chapter Two, the conclusion to the highest-grossing horror film of all time. Twenty-seven years after the Losers Club defeated Pennywise (Bill Skarsgård), he has returned to terrorize the town of Derry once more. Now adults, the Losers have long since gone their separate ways. However, kids are disappearing again, so Mike (Isaiah Mustafa), the only one of the group to remain in their hometown, calls the others home. Damaged by the experiences of their past, they must each conquer their deepest fears to destroy Pennywise once and for all...putting them directly in the path of the clown that has become deadlier than ever.

The highly anticipated sequel to IT (2017) creeps up to you in every possible way. From Carl’s Jr collectible cups to the Warner Bros Water Tower, there’s no limit to Pennywise getting to you.

Do you have the courage to return? @itmovieofficial takes over the iconic #WarnerBros Water Tower. pic.twitter.com/xmMAqWpxDP

Fans can also enjoy a 360 VR experience of the outside and various rooms of the Fun House.

Share your IT experience with friends! Using the official hashtag #ITMovie or #ITEnds on Twitter will trigger the IT emoji of two red balloons or Pennywise’s face.

The Goldfinch is the film adaptation of Donna Tartt’s globally acclaimed bestseller of the same name, which won the 2014 Pulitzer Prize for Fiction and spent more than 30 weeks on The New York Times Best Sellers list. Theodore “Theo” Decker (Ansel Elgort) was 13 years old when his mother was killed in a bombing at the Metropolitan Museum of Art. The tragedy changes the course of his life, sending him on a stirring odyssey of grief and guilt, reinvention and redemption, and even love. Through it all, he holds on to one tangible piece of hope from that terrible day...a painting of a tiny bird chained to its perch. The Goldfinch.

A twitter emoji of a goldfinch will appear if you use #TheGoldfinch.

Another highly anticipated film to look forward to and a great prep to Halloween. Director Todd Phillips’ Joker centers around the iconic arch nemesis and is an original, standalone fictional story not seen before on the big screen. Phillips’ exploration of Arthur Fleck, who is indelibly portrayed by Joaquin Phoenix, is of a man struggling to find his way in Gotham’s fractured society. A clown-for-hire by day, he aspires to be a stand-up comic at night...but finds the joke always seems to be on him. Caught in a cyclical existence between apathy and cruelty, Arthur makes one bad decision that brings about a chain reaction of escalating events in this gritty character study.

Share your experience with friends and use the official hashtag #JokerMovie.

Anticipation is building as we have seen snippets of what this film is going to be in Blinded by the Light, winner of the Gryphon Award for Best Film at the Giffoni Film Festival in Italy.

Western Stars marks Bruce Springsteen’s first studio album in five years. Touching on themes of love and loss, loneliness and family and the inexorable passage of time, the documentary film evokes the American West—both the mythic and the hardscrabble—weaving archival footage and Springsteen’s personal narration with song to tell the story of Western Stars. 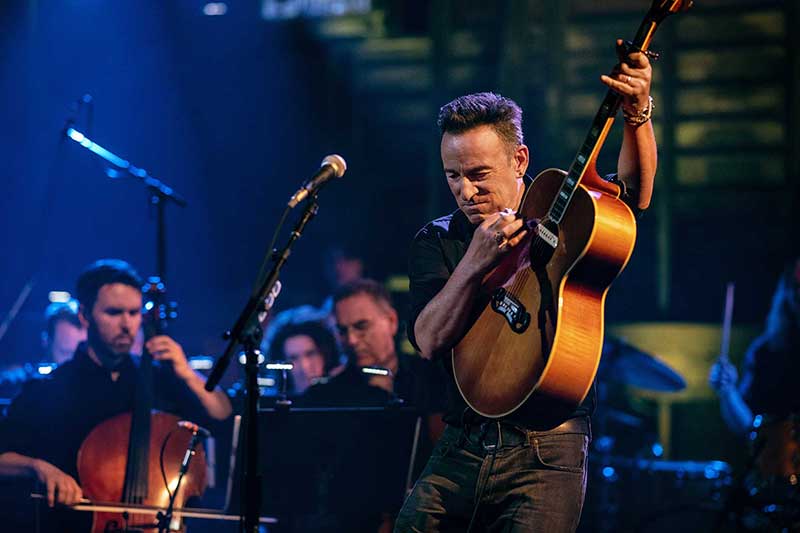 Western Stars offers fans the world over their only opportunity to see Springsteen perform all 13 songs on the album, backed up by a band and a full orchestra, under the cathedral ceiling of his historic nearly 100-year-old barn.

Toby Emmerich, Chairman of Warner Bros. Pictures Group stated, “Bruce lives in the super rarified air of artists who have blazed new and important trails deep into their careers. With Western Stars, Bruce is pivoting yet again, taking us with him on an emotional and introspective cinematic journey, looking back and looking ahead. As one of his many fans for over 40 years, I couldn’t be happier to be a rider on this train with Bruce and Thom.”

Western Stars, Springsteen’s 19th studio album, has achieved global success. It has been #1 on the iTunes charts on every continent, including such countries as the U.S., the UK, Belgium, Germany, Spain, Italy, the Netherlands, Australia, India, South Africa, and all of Scandinavia, among other countries. It has also received rave reviews, with critics using words like “hauntingly brilliant,” “beguiling,” “gorgeous” and a “masterpiece.”

Springsteen and Thom Zimny, who together helmed Western Stars, have collaborated on several projects over the years, including the documentary The Promise: The Making of Darkness on the Edge of Town, and the Netflix filmed version of the Tony Award-winning Springsteen on Broadway, which Zimny directed.

Set against the backdrop of 1950s New York, Motherless Brooklyn follows Lionel Essrog (Edward Norton), a lonely private detective living with Tourette Syndrome, as he ventures to solve the murder of his mentor and only friend, Frank Minna (Bruce Willis). Armed only with a few clues and the engine of his obsessive mind, Lionel unravels closely-guarded secrets that hold the fate of the whole city in the balance. In a mystery that carries him from gin-soaked jazz clubs in Harlem to the hard-edged slums of Brooklyn and, finally, into the gilded halls of New York’s power brokers, Lionel contends with thugs, corruption and the most dangerous man in the city to honor his friend and save the woman who might be his own salvation. 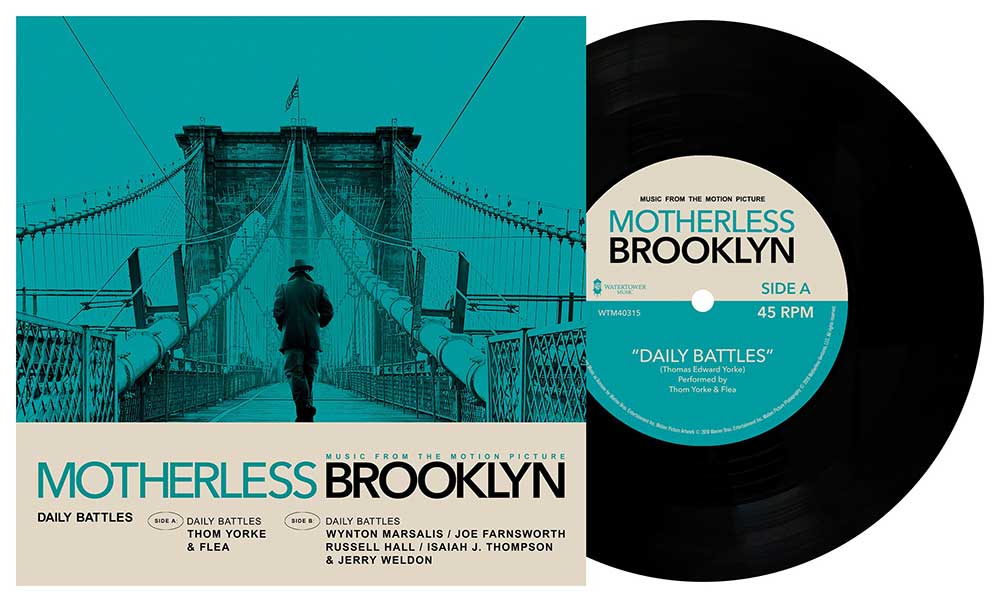 Tag your friends to see #MotherlessBrooklyn!

Doctor Sleep is the continuation of Danny Torrance’s (Ewan McGregor) story 40 years after the terrifying events of Stephen King’s The Shining. Still irrevocably scarred by the trauma he endured as a child at the Overlook, Dan Torrance has fought to find some semblance of peace. But that peace is shattered when he encounters Abra Stone (Kyliegh Curran), a courageous teenager with her own powerful extrasensory gift, known as the “shine.” Instinctively recognizing that Dan shares her power, Abra has sought him out, desperate for his help against the merciless Rose the Hat (Rebecca Ferguson) and her followers, The True Knot, who feed off the shine of innocents in their quest for immortality. Forming an unlikely alliance, Dan and Abra engage in a brutal life-or-death battle with Rose. Abra’s innocence and fearless embrace of her shine compel Dan to call upon his own powers as never before—at once facing his fears and reawakening the ghosts of the past.

See what others are talking about Doctor Sleep by using the official hashtag #DoctorSleepMovie.

Career con man Roy (Ian McKellen) sets his sights on his latest mark: recently widowed Betty (Helen Mirren), worth millions. And he means to take it all. But as the two draw closer, what should have been another simple swindle takes on the ultimate stakes. Legendary actors Mirren and McKellen star together on screen for the first time in this suspenseful drama about the secrets people keep and the lies they live.

See Helen Mirren and Ian McKellen in #GoodLiarMovie - a story about the secrets we keep and the lies we live – in theaters November 15. pic.twitter.com/ThUKT1j7tS

The film also casts Russell Tovey as Steven, and Jim Carter as Vincent.

Don’t miss any updates! Use the official hashtag #GoodliarMovie for more inside scoops.

“There is a bomb in Centennial Park. You have thirty minutes.” The world is first introduced to Richard Jewell (Paul Walter Hauser) as the security guard who reports finding the device at the 1996 Atlanta bombing—his report making him a hero whose swift actions save countless lives. But within days, the law enforcement wannabe becomes the FBI’s number one suspect, vilified by press and public alike, his life ripped apart. Reaching out to independent, anti-establishment attorney Watson Bryant (Sam Rockwell), Jewell staunchly professes his innocence. But Bryant finds he is out of his depth as he fights the combined powers of the FBI, GBI and APD to clear his client’s name, while keeping Richard from trusting the very people trying to destroy him.

A powerful and thought-provoking true story, Just Mercy follows young lawyer Bryan Stevenson (Michael B. Jordan) and his history-making battle for justice. After graduating from Harvard, Bryan had his pick of lucrative jobs. Instead, he heads to Alabama to defend those wrongly condemned or who were not afforded proper representation, with the support of local advocate Eva Ansley (Brie Larson). One of his first, and most incendiary, cases is that of Walter McMillian (Jaime Foxx), who, in 1987, was sentenced to die for the notorious murder of an 18-year-old girl, despite a preponderance of evidence proving his innocence and the fact that the only testimony against him came from a criminal with a motive to lie. In the years that follow, Bryan becomes embroiled in a labyrinth of legal and political maneuverings and overt and unabashed racism as he fights for Walter, and others like him, with the odds—and the system—stacked against them.

A triumph. Watch #JustMercy in theaters this December. #TIFF19 pic.twitter.com/p5zNS1lyZd