The horrors of the Khmer Rouge regime, which turned Cambodia into a living hell in the latter half of the 1970s, were vividly brought to life in the unforgettable film "The Killing Fields," released 35 years ago this week. Based on the experiences of New York Times correspondent Sydney Schanberg (played by Sam Waterston) and Cambodian journalist Dith Pran (played by Haing S. Ngor), the movie won three Academy Awards and was nominated for four more, including Best Picture. It follows Schanberg and Pran during their coverage of the Cambodian Civil War, Pran’s capture by the Khmer Rouge, and Schanberg’s unwavering determination to locate his friend.

Like Dith Pran himself, Haing S. Ngor was a survivor of the Cambodian genocide. Since the Khmer Rouge would execute anyone with an education, he had to hide the fact that he was a gynecologist, which horrifically led in him watching his wife die in childbirth in a concentration camp. Though he had never acted, Ngor was eager to appear in "The Killing Fields" and be able to show his country’s plight to the world. His low-key, yet powerful, performance won him the Academy Award for Best Supporting Actor.

Spalding Gray plays a United States consul stationed in Cambodia. Gray turned his experiences while filming "The Killing Fields" in Thailand into a dramatic monologue titled "Swimming to Cambodia." This monologue was turned into an acclaimed feature film of the same name in 1987.

Producer David Puttnam, who had previously brought Warner Bros. a Best Picture Oscar for "Chariots of Fire" (1981), was able to assemble a first-rate creative team. He selected acclaimed television director Roland Joffe to helm "The Killing Fields," which would mark his feature film debut. Screenwriter Bruce Robinson had acted in many films (including 1968’s "Romeo and Juliet") before turning to screenwriting. He would write and direct the British cult classic "Withnail and I" in 1987. Both Joffe and Robinson received Oscar nominations for their first behind-the-scenes forays into feature film work.

"The Killing Fields" is one of the most visually striking movies of its era, in no small part due to Chris Menges’ Oscar-winning cinematography.

Jim Clark’s sensational Oscar-winning editing contributes tremendously to the movie’s sense of chaos and danger. In this scene, Dith Pran rushes to have his wife and children evacuated from Cambodia along with the U.S. embassy staff.

Haing S. Ngor and Sam Waterston consult with director Roland Joffe between takes, while director of photography Chris Menges (at right) looks on. Joffe and Menges would reunite two years later for "The Mission," which would win Menges his second Academy Award.

"The Killing Fields" featured one of John Malkovich’s first major film roles. He also appeared in "Places in the Heart" in 1984, which earned him his first Oscar nomination for Best Supporting Actor, but the award went to his "The Killing Fields" co-star Haing S. Ngor, instead.

The human cost of war is shown in this scene recreating a hospital in Phnom Penh. According to Schanberg, "It was a ritual for Pran and I to go every day to at least one of the hospitals to learn the rate of casualties and to talk to the wounded. It was a way to measure the war – It brought you to the reality of war."

One of the most harrowing scenes in the movie comes when the reporters are arrested by a group of teenaged Khmer Rouge soldiers, who had no qualms about executing Westerners. Pran recalled, "They drove us around the city and…I tried to explain: We decided to stay on because we were pleased about the victory of the Khmer Rouge and wanted to tell the world. I was sweating. I thought we’d be killed. Later, I explained it all over again to the officer. I told him we'd met his boss earlier in the day (that was a lie…). I asked him to send a message to his boss, and to say something flattering, something good. That's what saved our lives." 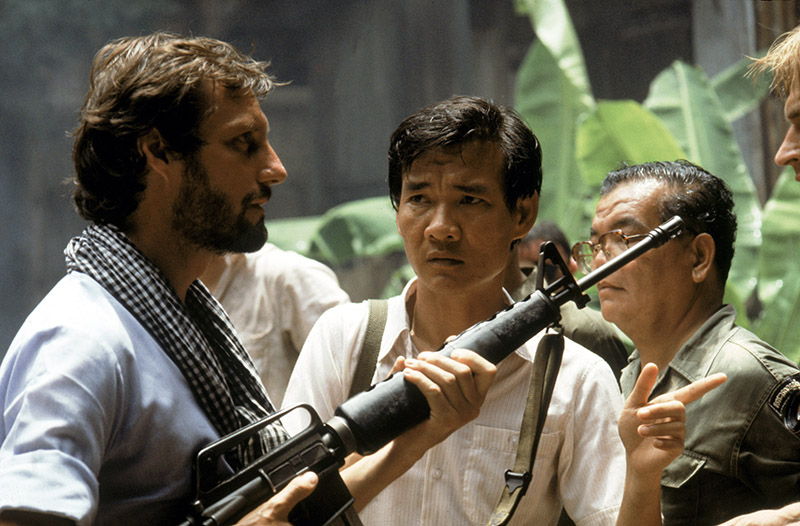 A heartbreaking scene occurs when Schanberg watches helplessly as Pran is forced to leave the French embassy and surrender to the Khmer Rouge.

According to Dith Pran, "In 1975, many people died from starvation – perhaps 10% of the whole population of 7 million – especially babies and old people. During that time…I would eat anything – frogs, snakes, black scorpions. You tried to find food all the time, lizard's eggs, anything, because, when you're starving, even something sour becomes sweet."

After returning to the United States, Schanberg won the Pulitzer Prize in International Reporting, which he claimed he shared with Pran. He never gave up on his quest to find his friend.  Sam Waterston’s performance earned him a Best Actor Oscar nomination. His daughter, Katherine Waterson, is currently playing Tina Goldstein in the Fantastic Beasts film franchise.

Dith Pran recalled, "So I went to see the 'killing fields', as we called them. There were two main execution areas and these alone must have held four to five thousand bodies, barely covered by a layer of earth. In the water wells, the bodies were like soup bones in broth." In all, between 1.2 and 2.8 million Cambodians lost their lives during the Khmer Rouge regime, either by disease, famine, or execution.

After winning his Oscar, Ngor continued his acting career, most notably in Oliver Stone’s "Heaven and Earth" (1993). In 1996 his life was tragically cut short when he was murdered just outside of his home in Los Angeles's Chinatown. Shortly before the release of "The Killing Fields," Ngor told the New York Times, "If I die from now on, OK. The film will go on 100 years."