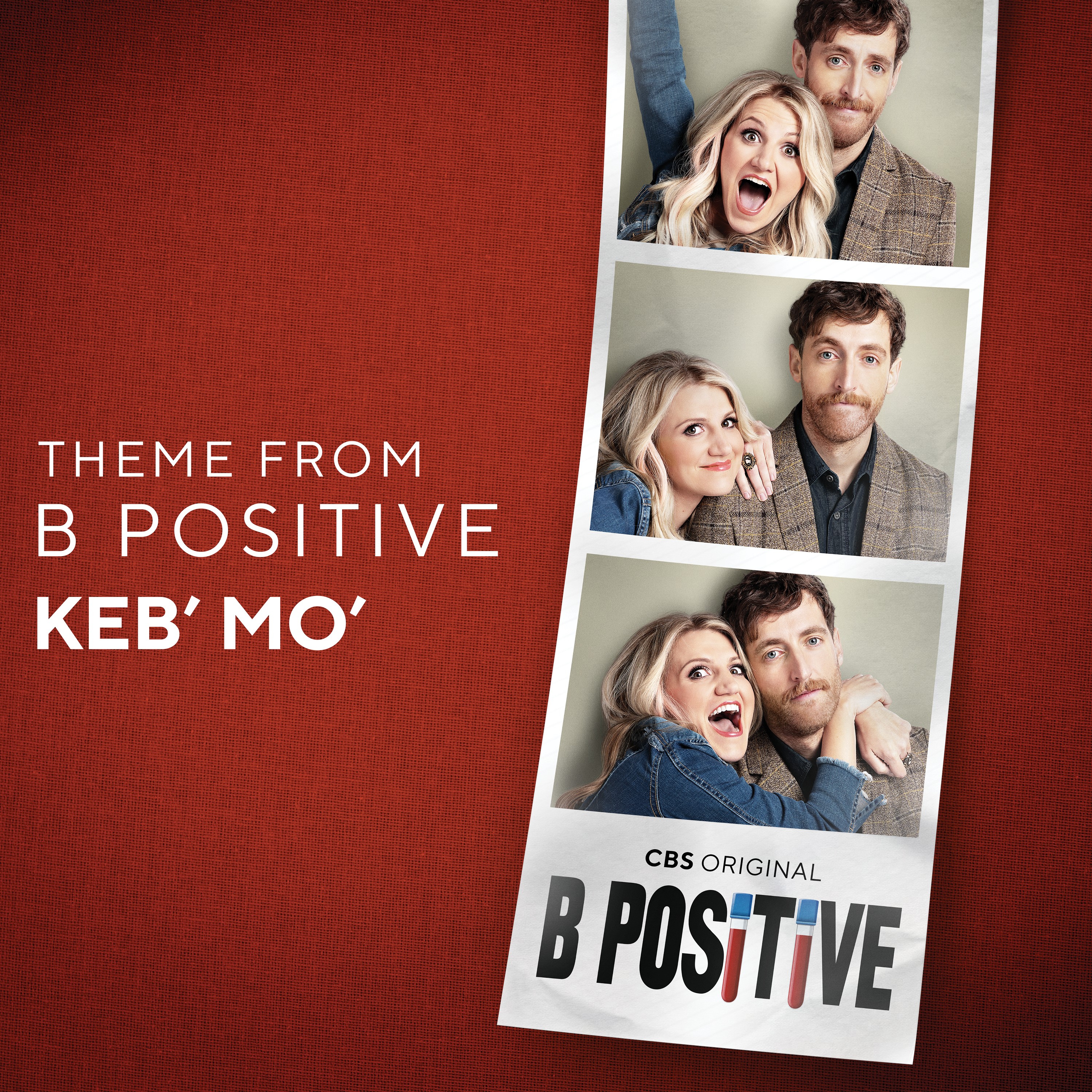 (Burbank, CA) — WaterTower Music is excited to announce today’s digital release of the full-length theme song from B POSITIVE, the CBS comedy which revolves around Drew, a therapist and newly divorced dad who is faced with finding a kidney donor when he runs into Gina, a rough-around-the-edges woman from his past who volunteers her own. Together, they form an unlikely and life-affirming friendship as they begin a journey that will forever impact both of their lives.

Now available on all streaming platforms, the Theme From B Positive is performed by the widely admired, 5x Grammy Award-winning musical force Keb’ Mo’, who co-wrote the theme with the show’s award-winning executive producer and writer, Chuck Lorre.

No stranger to the world of TV and film, Keb’ Mo’ has recorded for, composed for, and appeared on camera as an actor and performer in a variety of projects over a storied career that has defied typical genre labels and categorization. And this is not the first collaboration between Keb’ Mo’ and Chuck Lorre, as Keb’ also performed the theme song for the hit sitcom Mike & Molly, which was executive produced by Lorre.

Lorre and Keb’ Mo’ have obvious mutual respect and admiration. Lorre explains, “Collaborating on a song with Keb’ Mo’ is as happy as I ever get in this business. Just to be able to watch how he crafts music and lyrics well beyond where I might take them, is like being in a masterclass. No, not like, it is a masterclass. Plus, he’s just a really cool guy to hang with.”

Keb’ Mo’ reciprocates the high regard. “Working with Chuck is a rare privilege. He is persistent, kind, and a master of his craft. He has a profoundly deep and empathetic soul. Most of all, I feel like I’ve found a great friend in Chuck.”

ABOUT KEB’ MO’
Keb’ Mo’s self-titled release under his coined Keb’ Mo’ moniker, reached it’s quarter century milestone in 2019, and over the years, Keb’ has proven that he is a musical force that defies typical genre labels. Album after album, 14 in total, he has garnered 5 GRAMMY awards, including his most recent 2019 release, Oklahoma, which won in the Best Americana Album category. Keb’s list of GRAMMY recognitions continues with 12 GRAMMY nominations, in total, including his 2014 self-produced release, BLUESAmericana, earning three nominations on its own as well as a producer/engineer/artist GRAMMY Certificate for his track on the 2001 Country Album of the Year, Hank Williams Tribute – Timeless. The talented artist has also been awarded 14 Blues Foundation Awards and 6 BMI Awards for his work in TV and Film.

He has been featured in TV and film, playing Robert Johnson in the 1998 documentary Can’t You Hear The Wind Howl, appeared three times on the television series Touched By An Angel, and was the ghostly bluesman Possum in John Sayles’ 2007 movie Honeydripper. Keb’ created “Martha’s Theme” for the TV show Martha Stewart Living. Keb’ also wrote and performed the theme song for the hit sitcom Mike & Molly, executive produced by Chuck Lorre, and was music composer for TNT’s Memphis Beat, starring Jason Lee. In early 2017, nine songs from Keb’s extensive catalog were featured in the film Signed, Sealed, Delivered: Higher Ground on the Hallmark Movies and Mysteries channel. This film was also Keb’s first feature film lead acting role. He also appears in an episode on the CMT series Sun Records as Howlin’ Wolf and can be heard playing his original song “Operator.” Keb’ has played his iconic version of “America The Beautiful” in the series finale of Aaron Sorkin’s The West Wing, as well as at the actual White House for President Obama.

Keb’ Mo’ has been a long-time supporter of the Playing For Change Foundation (PFCF), a nonprofit organization that creates positive change through music education. PFCF provides free music education to children in nine countries, including Brazil, Bangladesh, Ghana, Mali, Nepal, Rwanda, South Africa and the United States, and has established 12 music schools around the world. They also work with partners to address basic needs in the communities where they teach, including providing education, clean water, food, medicines, clothing, books, and school supplies.

Additionally, Keb’ is a celebrity mentor with the Kennedy Center’s Turnaround Arts program, which focuses on elementary and middle schools throughout the United States. This highly successful program began under the guidance of Michelle Obama and The President’s Committee for the Arts and Humanities. Each artist adopts a school and becomes a mentor, working with teachers, students, parents, and the community to help build a successful arts education program. Keb’ enjoys his mentorship at The Johnson School of Excellence in Chicago, Illinois.

In 2017, Keb’ Mo’ released TajMo, a collaborative album with the legendary Taj Mahal. The project, which won the 2018 GRAMMY for Best Contemporary Blues Album, features guest appearances by Sheila E., Joe Walsh, Lizz Wright and Bonnie Raitt. At the 39th Annual Blues Music Awards, Keb’ Mo’, alongside Blues Hall of Famer Taj Mahal, was awarded Album of the Year and Contemporary Blues Album of the Year for their first-ever collaboration project, TajMo. Keb’ also took home the title of Contemporary Blues Male Artist of The Year. The multi-generational duo went on to tour the United States and Europe in support of their album.

ABOUT WATERTOWER MUSIC
WaterTower Music, the in-house label for the WarnerMedia companies, releases recorded music as rich and diverse as the companies themselves. It has been the soundtrack home to many of the world’s most iconic films, television shows and games since 2001.