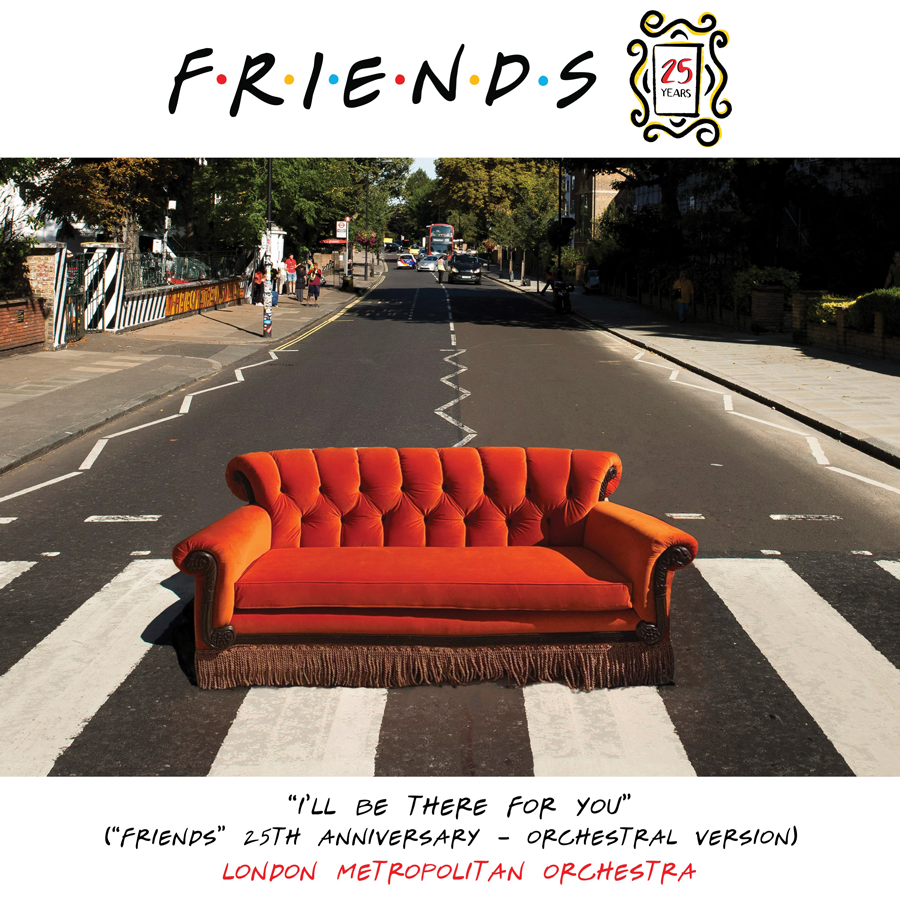 ​BURBANK, Calif. — Fifty years after The Beatles recorded Abbey Road, The London Metropolitan Orchestra visits one of the most iconic recording studios in history to record a Beatles-inspired orchestral version of “I’ll Be There for You,” the theme song to the global hit comedy Friends, in celebration of the series’ 25th anniversary. “I’ll Be There for You (Friends 25th Anniversary – Orchestral Version)” is available to stream/download now on iTunes and other platforms.

The new rendition of the show’s theme song is produced and arranged by Grammy® winner Giles Martin, son of legendary Beatles producer Sir George Martin. Giles has remixed several albums from The Beatles, including The Beatles (“The White Album”), Sgt. Pepper’s Lonely Hearts Club Band, and 1. He also lent his expertise to the Ron Howard film Eight Days a Week, Martin Scorsese’s George Harrison: Living in a Material World, and A Hard Day’s Night. Additionally, he collaborated with his father on co-producing the live show and album release for The Beatles/Cirque du Soleil show Love, for which they won two Grammys — Best Compilation Soundtrack Album for Motion Picture, Television or Other Visual Media, and Best Surround Sound Album.

According to Giles, The London Metropolitan Orchestra’s orchestral version of the theme song “takes inspiration from The Beatles. We feel privileged to be brought into the world of Friends and add a bit of fun to celebrate the 25th anniversary of the series.” Continued Giles, “Life throws different things at you, and much like Abbey Road, the legacy of which has lasted for generations, so has Friends. It further proves that although generations shift and age, things like Friends stay the same. You can go back to it and enjoy it the same way you always did.”

The song was recorded with 74 members of the London Metropolitan Orchestra at Abbey Road Studios on September 2, 2019, where it was also mixed and mastered in just three total days. The famous “Mrs Mills” piano, named after performer/pianist Gladys Mills and sometimes used by The Beatles, was used for the recording.

This is the first studio-commissioned orchestral version of the iconic theme song.

Devoted Friends fans can also download the free Friends 25 App, available now in English, Spanish, and Portuguese! The App has something for everyone, including augmented reality photo and video 3D filters, memorable quotes from the series, trivia, funFriends-themed names and frames, photo booth stickers, and scene-inspired recipes. Download today at https://friends25app.com/.

Twitter Pitch: The @FriendsTV theme song “I’ll Be There for You” gets The Beatles treatment with a new, orchestral version from The London Metropolitan Orchestra, recorded at Abbey Road Studios: https://bit.ly/2mngx66 #Friends25

Celebrating the 25th anniversary of its debut in 1994, Friends remains one of television’s most beloved series. One of the highest-rated shows on television in its original network run, the series still remains a perennial go-to in syndication and on streaming services, where it continues to be a smash hit worldwide. A favorite among critics and fans alike throughout its 10-season run, Friends not only won the Emmy® for Outstanding Comedy series, but also garnered Emmy® Awards for series stars Jennifer Aniston and Lisa Kudrow. From Warner Bros. Television, Friends follows the lives and loves of a close-knit group of friends living in New York City: siblings Ross (David Schwimmer) and Monica Geller (Courteney Cox), along with friends Chandler Bing (Matthew Perry), Phoebe Buffay (Lisa Kudrow), Joey Tribbiani (Matt LeBlanc) and Rachel Green (Jennifer Aniston). Friends was created by David Crane and Marta Kauffman, who executive produced the series with Kevin Bright through Bright/Kauffman/Crane Productions in association with Warner Bros. Television.