“THE ONE WITH THE GLOBETROTTING SOFA”

WE’VE GOT BIG NEWS (YOU SHOULD SIT DOWN FOR THIS)

The Central Perk Sofa is Traveling the World, and Now is Your Chance to

Snap a Pic on the Legendary Lounger!

PLANET EARTH (September 3, 2019) — The Central Perk sofa is “going places!” So, take a seat, friends, as Warner Bros. Television Group celebrates the 25th anniversary of "Friends" by inviting you and your BFFs to snap a pic on the iconic three-seater. The must-see, comfy conversation starter will be found in some of the world’s most-talked about destinations, starting with the Grand Canyon (see accompanying photo), and continuing to the Empire State Building, London’s Tower Bridge, the Burj Khalifa in Dubai, and countless others, now through the end of September 2019. 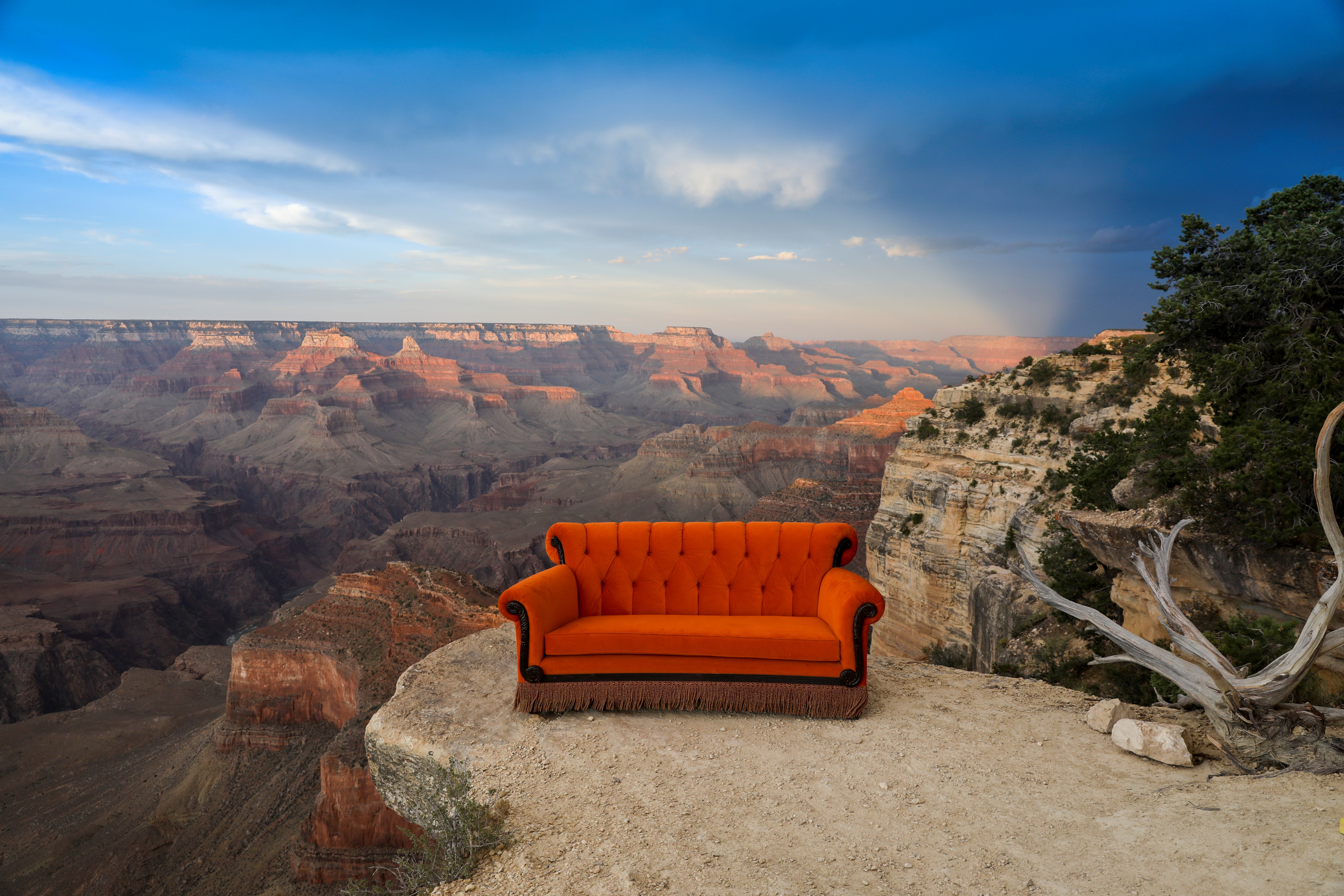 Fans attending New York’s Tribeca TV Festival on September 13 to see series executive producers David Crane, Marta Kauffman and Kevin Bright discuss the landmark comedy series should also keep a lookout for their Insta-worthy sofa moment. In addition, the sofas will host filmmakers and talent at the Toronto International Film Festival (as part of Variety’s Photo Studio) and the Venice International Film Festival (as part of Elle Italia’s photo studio). And, of course, the iconic orange couch will also be on display at the Friends Pop-Up Experience in New York City.

To launch the "Friends" 25th Couch Tour, the Central Perk sofa made initial appearances at the Grand Canyon (also celebrating the 100th Anniversary of the National Park Service) and at Stonehenge (no doubt celebrating a much older anniversary!). Across the globe, worldwide fans can look forward to finding the Central Perk sofa at the following iconic locations. (Please note: this list is not comprehensive as new placements continue to occur.)

The Central Perk sofa is also coming to select theaters nationwide as part of the “FRIENDS 25th: The One with the Anniversary” Fathom Events screenings (Sept. 23 & 28, and Oct. 2). Stop by designated theaters after September 16 with your friends and get a photo on the famous sofa! Go to Fathom Events for specific locations.

The world-famous couch will be on display at AT&T retail stores in New York City’s Times Square, Chicago, San Francisco, Atlanta, Seattle, the Mall of America in Minneapolis, Anchorage (Alaska) and Mexico City. The ubiquitous couch will also pop up in select retail stores across the U.S., Mexico and Latin America.

About Friends
Celebrating the 25th anniversary of its debut in 1994, Friends remains one of television’s most beloved series. One of the highest-rated shows on television in its original network run, the series remains a perennial go-to in syndication and on streaming services, where it continues to be a smash hit worldwide. A favorite among critics and fans alike throughout its 10-season run, Friends not only won the Emmy® for Outstanding Comedy series, but also garnered Emmy® Awards for series stars Jennifer Aniston and Lisa Kudrow. From Warner Bros. Television, Friends follows the lives and loves of a close-knit group of friends living in New York City: siblings Ross (David Schwimmer) and Monica Geller (Courteney Cox), along with friends Chandler Bing (Matthew Perry), Phoebe Buffay (Lisa Kudrow), Joey Tribbiani (Matt LeBlanc) and Rachel Green (Jennifer Aniston). Friends was created by David Crane and Marta Kauffman, who executive produced the series with Kevin Bright through Bright/Kauffman/Crane Productions in association with Warner Bros. Television.