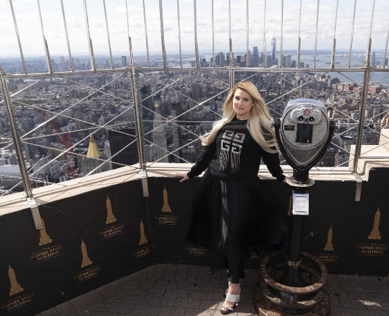 Twitter Pitch: .@Meghan_Trainor will debut her new cover of the @FriendsTV theme song for a music-to-light show on 9/22 at @EmpireStateBldg, one of eight international landmarks to light up in “Friends” colors: https://bit.ly/2kHaKYo #Friends25

(New York, NY) – GRAMMY®-winning artist Meghan Trainor will light up the New York City skyline with an Empire State Building music-to-light show on “Friends” Day for the world premiere of her cover of the show’s theme song, “I’ll Be There for You,” on Sunday, September 22, at 8:30 p.m. ET — the exact time “Friends” debuted on September 22, 1994. In addition, the song will be synced live on iHeartMedia’s Z100, New York’s #1 hit music station, at the same time. Following its exclusive premiere on Z100, the song will be available to download on iTunes and other digital retailers beginning at Midnight Eastern Time on September 23.

The 103-story world-famous building is one of eight of the world’s tallest and most iconic landmarks to be illuminated in the familiar red, yellow and blue primary colors of the “Friends” logo. The can’t-miss light show at The Empire State Building is designed by lighting designer Marc Brickman and is timed to Trainor’s version of the theme song. The Empire State Building tower lights will shine from dusk until 2 a.m.

“I can’t believe Warner Bros. asked me to do this,” said Meghan Trainor. “I’m so honored! I’m so excited that I get to be a part of celebrating such a legendary and iconic show like ‘Friends’!”

Meghan Trainor first made history in 2014 with her diamond-certified smash single “All About That Bass.” The GRAMMY® Award–winning singer, songwriter and multi-instrumentalist stands out as “one of only five female artists to achieve a diamond certification from the RIAA” — an honor bestowed upon only 15 other singles to date. Thus far, she has garnered a GRAMMY® Award and achieved eight multi-platinum singles and two platinum albums, sold out three world tours, penned multi-platinum hits for peers across pop and country, and received countless industry awards and nominations. Expanding her influence, she starred on FOX’s hit series “THE FOUR: Battle for Stardom” for two seasons. Following 2018 anthems “No Excuses” and “Let You Be Right,” she celebrated Valentine’s Day 2019 with the love-themed six-song “The Love Train” EP, and to kick off the summer, she collaborated with dance music titan Kaskade for their song “With You,” paving the way for more surprises to come.

Below is a complete list of participating locations that will light up around the world at 8:30 p.m. (the time the series debuted on September 22, 1994) local time:

Devoted “Friends” fans can also download the free “Friends” 25 App, available now in English, Spanish, and Portuguese! The App has something for everyone, including augmented reality photo and video 3D filters, memorable quotes from the series, trivia, fun “Friends”-themed names and frames, photo booth stickers, and scene-inspired recipes. Download today at https://friends25app.com.

About “Friends”
Celebrating the 25th anniversary of its debut in 1994, “Friends” remains one of television’s most beloved series. One of the highest-rated shows on television in its original network run, the series still remains a perennial go-to in syndication and on streaming services, where it continues to be a smash hit worldwide. A favorite among critics and fans alike throughout its 10-season run, “Friends” not only won the Emmy® for Outstanding Comedy series, but also garnered Emmy® Awards for series stars Jennifer Aniston and Lisa Kudrow. From Warner Bros. Television, “Friends” follows the lives and loves of a close-knit group of friends living in New York City: siblings Ross (David Schwimmer) and Monica Geller (Courteney Cox), along with friends Chandler Bing (Matthew Perry), Phoebe Buffay (Lisa Kudrow), Joey Tribbiani (Matt LeBlanc) and Rachel Green (Jennifer Aniston). “Friends” was created by David Crane and Marta Kauffman, who executive produced the series with Kevin Bright through Bright/Kauffman/Crane Productions in association with Warner Bros. Television.