(Los Angeles, CA) – DC is celebrating Free Comic Book Day (FCBD) 2021 in a big way with books for readers of every age! Fans will get their first look at Jace Fox, the new Dark Knight in the 32-page Batman FCBD Special Edition as well as a sneak peek of the world’s deadliest villains in the 32-page Suicide Squad FCBD Special Edition. Plus, DC will be offering fans a 20-page preview of the upcoming young adult graphic novel, Teen Titans: Beast Boy Loves Raven while Middle Grade readers can enjoy flipbook previews of Batman And Robin And Howard and Amethyst: Princess Of Gemworld.

Books for Adults
• BATMAN FCBD SPECIAL EDITION (Price: $0.25)
The BATMAN creative team of GLAAD Award-winning writer James Tynion IV (Detective Comics) and Jorge Jimenez (Justice League) take their epic run to the next level. Gotham City is on the brink of a violent evolutionary path as the danger level to Batman and his allies reaches a fever pitch. The Magistrate now have full support from the mayor to handle high level law enforcement in Gotham and branded the Dark Knight as Public Enemy #1. Plus, the Scarecrow has his own terrifying agenda as he launches his master plan in the chaos. This is the first look at the epic Fear State event that will run across Batman titles beginning this Fall.

The new Dark Knight, Jace Fox, has arrived in this sneak peek of the upcoming I Am Batman series written by Oscar® winner John Ridley (The American Way) with stunning art by Travel Foreman (Electric Warriors). Fans will get a taste of this blockbuster storyline starring the newest Caped Crusader in this 32-page FCBD special edition. 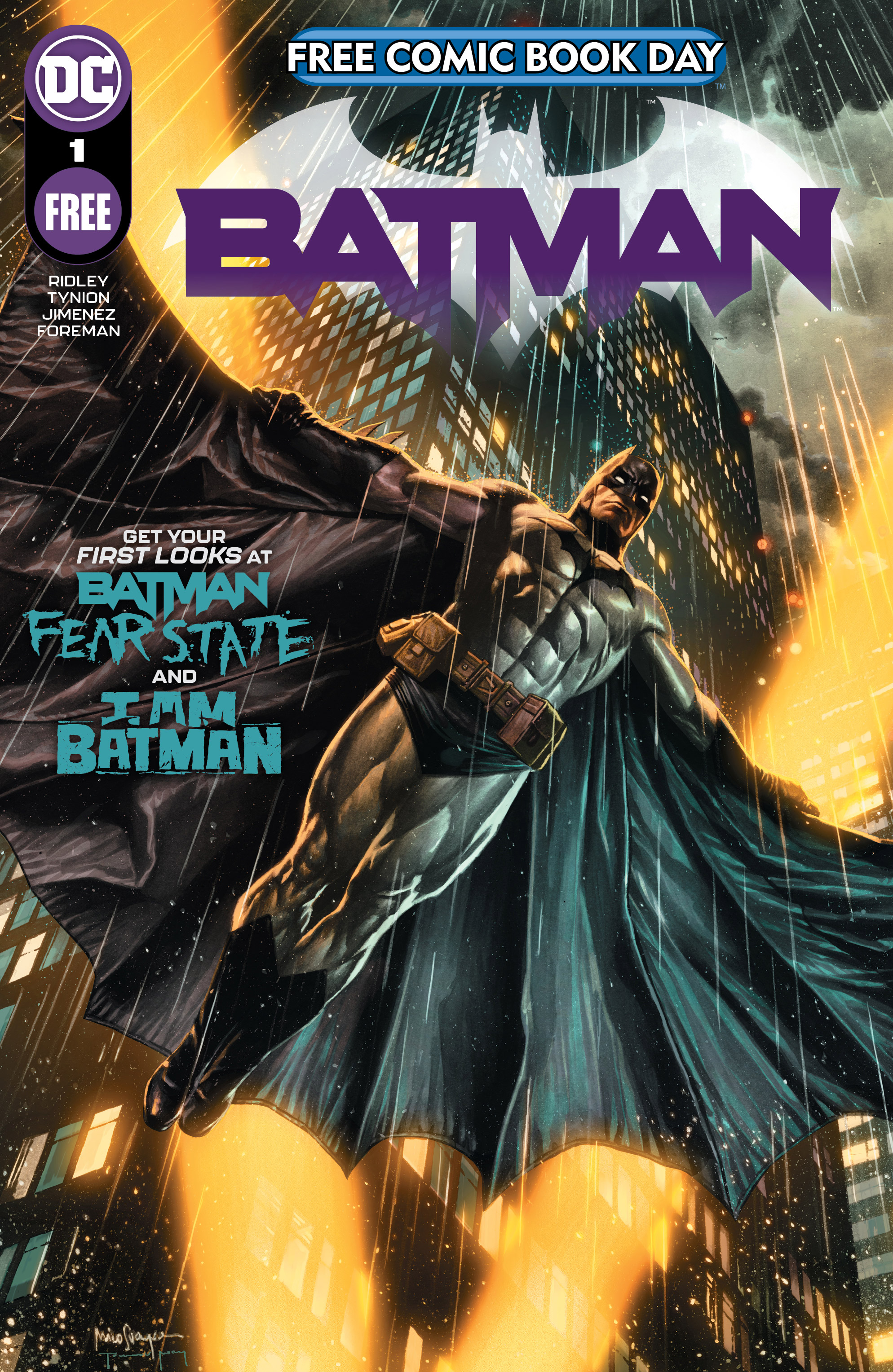 • SUICIDE SQUAD FCBD SPECIAL EDITION (Price: $0.25)
Just in time for The Suicide Squad movie written and directed by James Gunn, releasing in theaters and HBO Max on August 6th, with this incredible special edition that features the world’s deadliest villains.

This 32-page issue also includes a preview of the sensational Suicide Squad: Get Joker! limited series by writer Brian Azzarello (Wonder Woman) and artist Alex Maleev (Batman: The Dark Knight). An incarcerated and angry Red Hood receives a chance at freedom from Amanda Waller. All the former Boy Wonder needs to do to gain his freedom is lead the Suicide Squad on a mission to terminate The Joker. Paired up with Harley Quinn and Gotham City killers such as Firefly and Killer Croc, he doesn’t care if any of them come back alive, as long as The Joker dies!

It seems like years, but it’s only been a few days since Raven Roth recovered her memories; trapped her demon father, Trigon, in her amulet; and had her heart broken for the first time. Garfield Logan still can’t believe he has powers that allow him to change into different animals, but the price of knowing that his parents kept this secret hidden from him just feels too high.

Both are seeking answers from the one person who seems to have them all figured out: Slade Wilson. When their paths converge in Nashville, Raven and Gar can’t help but feel a connection, despite the secrets they both try to hide. It will take a great amount of trust and courage to overcome the wounds of their pasts, but can they find acceptance for the darkest parts of themselves? Or maybe even love?

This 32-page special edition features a chapter from the upcoming original graphic novel. The full graphic novel will be available digitally and at participating bookstores on September 28, 2021. 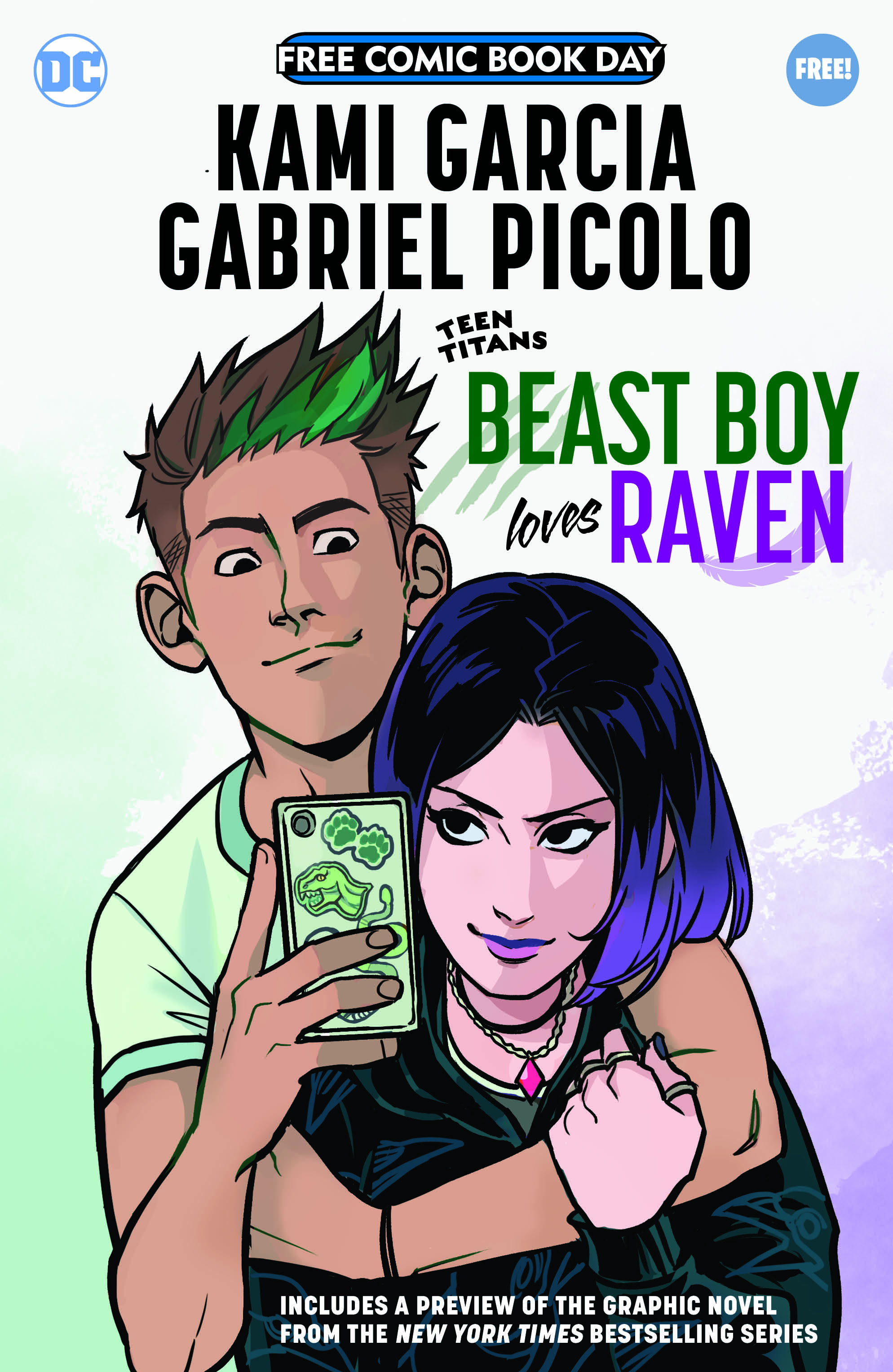 To Damian Wayne, there is nothing more important than protecting the streets of Gotham City as Robin. But when he makes a critical mistake while out on patrol, Damian finds himself benched. And what’s more, Damian’s dad, Bruce Wayne--a.k.a. Batman--decides that starting over in a new school will be just the distraction Damian needs from his superhero routine. Certain that Gotham Metro Academy has nothing to teach him, Damian is completely unprepared for the challenge he finds in Howard--the smartest and most athletic kid in school. The boys’ rivalry is instantaneous and fierce...and both are sure only one of them can be the best in their class.

Amaya, princess of House Amethyst in Gemworld, is something of a troublemaker. She and her brother have great fun together until a magical prank goes much too far and her parents ground her...to Earth! They hope a whole week in the mundane world will teach her that magic is a privilege...and maybe washing dishes by hand will help her realize the palace servants should be respected. Three years later, Amy has settled into middle school and ordinary life. She doesn’t remember any other life. So, when a prince of the realm brings her home and restores her magical destiny, how will she cope?

Both Batman & Robin And Howard and Amethyst: Princess Of Gemworld will be available digitally and at participating bookstores on November 9, 2021. 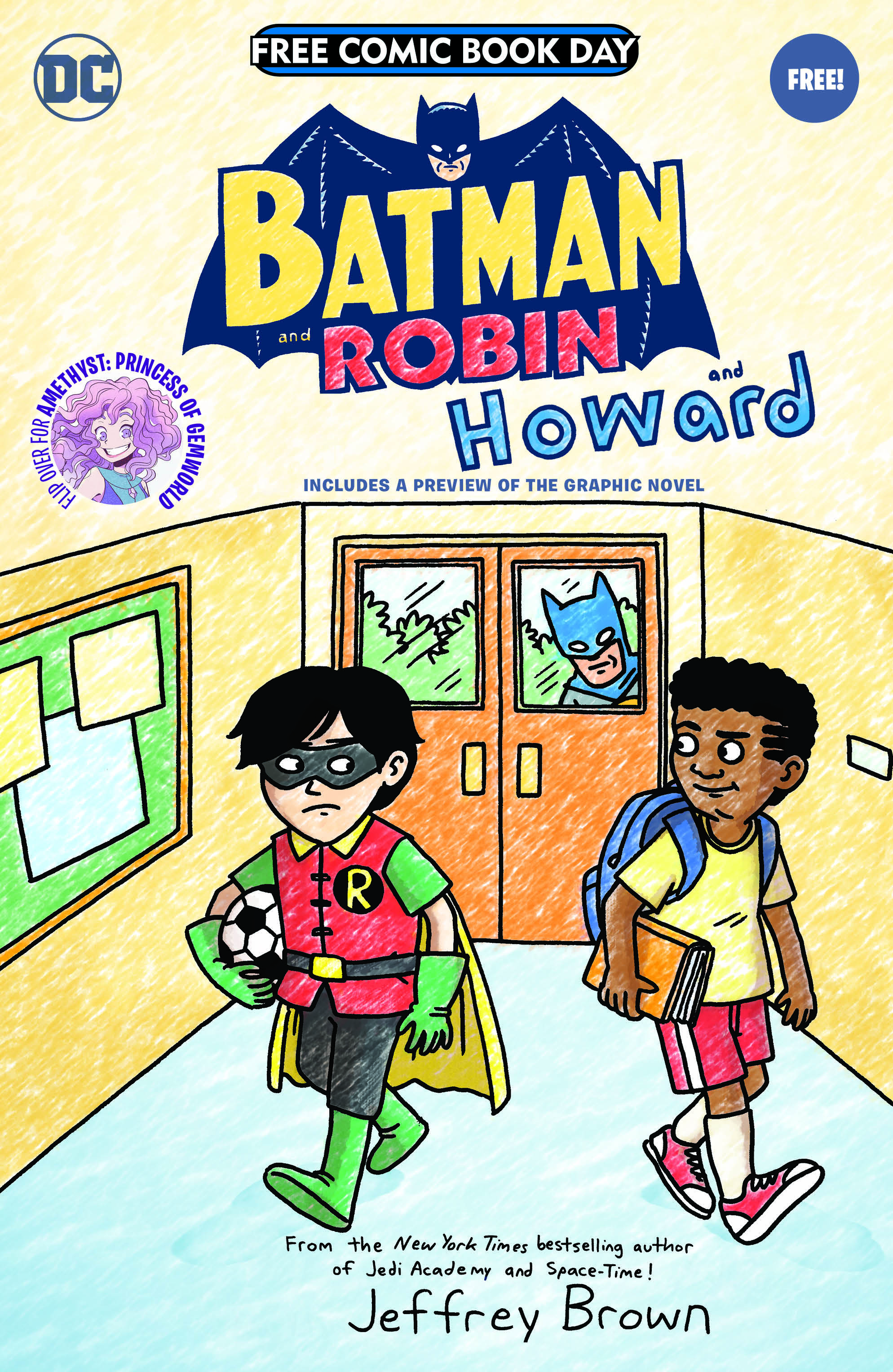 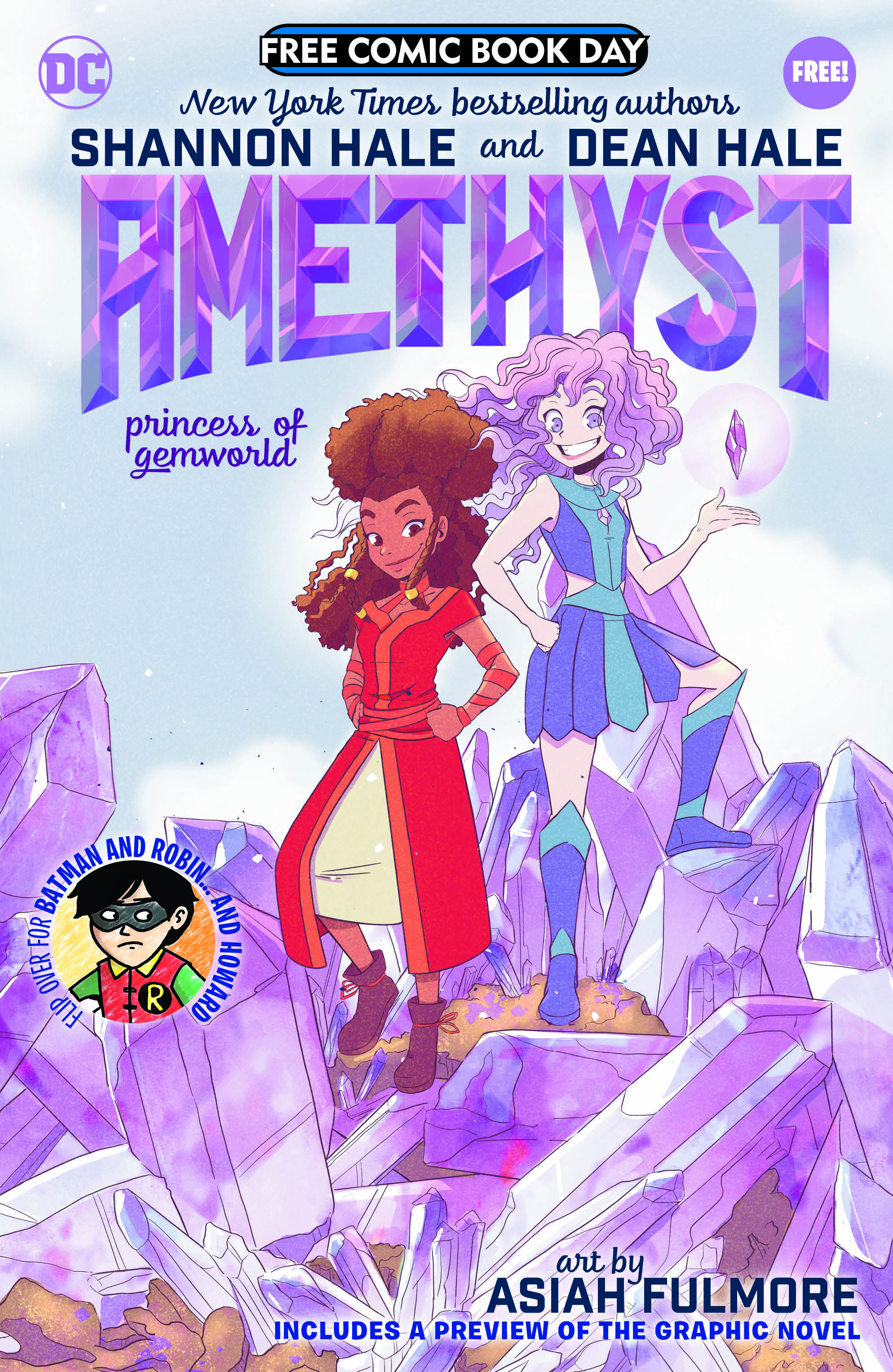 All four offerings will be available at participating retailers on Tuesday, August 10, 2021. For more information on Free Comic Book Day, visit the website at freecomicbookday.com.

For more information on the World’s Greatest Super Heroes, visitdccomics.com, the DC YouTube Channel, or follow @DCComics and @TheDCNation on social media. For a free trial of DC Universe Infinite, visit the website at dcuniverseinfinite.com.

ABOUT DC:
DC, a WarnerMedia Company, creates iconic characters, enduring stories, and immersive experiences that inspire and entertain audiences of every generation around the world and is one of the world’s largest publishers of comics and graphic novels. As a creative division, DC is charged with strategically integrating its stories and characters across film, television, consumer products, home entertainment, interactive games, and the DC Universe Infinite digital subscription service and community engagement portal. For more information visit dccomics.com and dcuniverseinfinite.com.